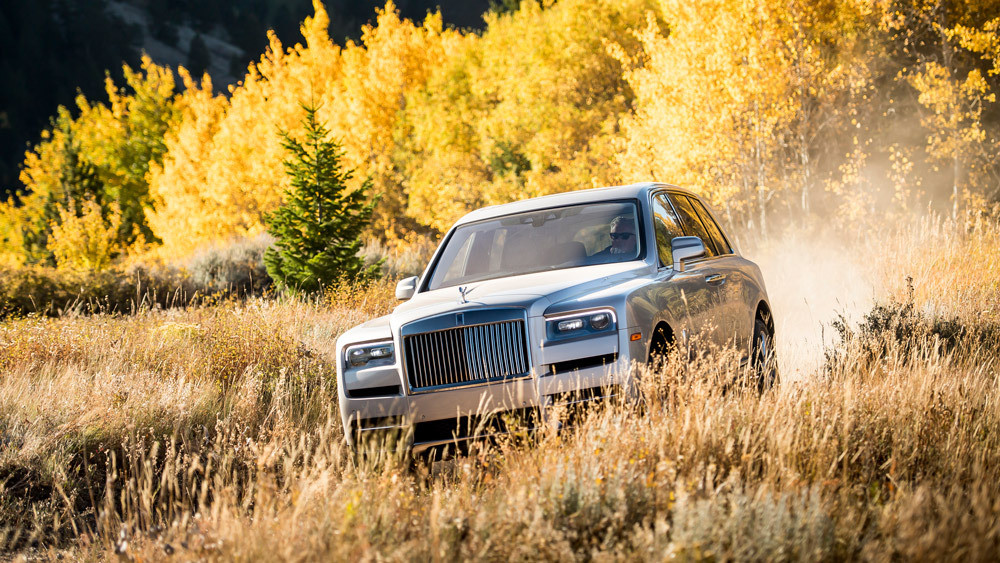 The posh Cullinan SUV packed plenty of punch during a test-drive around Jackson Hole.

Those who remember Mohammed Ali when he was Cassius Clay recall the devastating power of a young fighter who cleaned house with his opponents while making it all seem so easy. The heavyweight would eventually boast in anticipation of his 1974 Manila bout, The Rumble in the Jungle, that he’d “float like a butterfly and sting like a bee.” Indeed, that same strategy could as easily have inspired Rolls-Royce Motor Cars to develop the Cullinan, the first SUV to have a Spirit of Ecstasy atop its formidable Parthenon-shaped grille. The carmaker refers to its Cullinan as a “high-bodied vehicle,” more apposite, perhaps, insofar as the “sport” in SUV makes way for “luxury” in a manner unlike that of any other car with such an athletic job to do.

Everyone saw it coming, not least because nearly every automotive marque on the planet is relying on the expanding sport-utility segment to achieve success in a growing global market. Meanwhile, Rolls-Royce customers suffering the indignity of driving other brands’ SUVs were clamouring for one with Goodwood provenance. In anticipation of increasing demand, Rolls-Royce announced Project Cullinan three years ago, having expended the time and resources necessary to ensure that its car would be, in the brand’s own words, “The Rolls-Royce of SUVs.” Even the name resonates luxury, referring to the largest gem-quality diamond ever mined, a 3106-carat, baseball-sized rock that was eventually cut into 105 gemstones, the largest two of which embellish the Crown Jewels worn by the Queen of England. 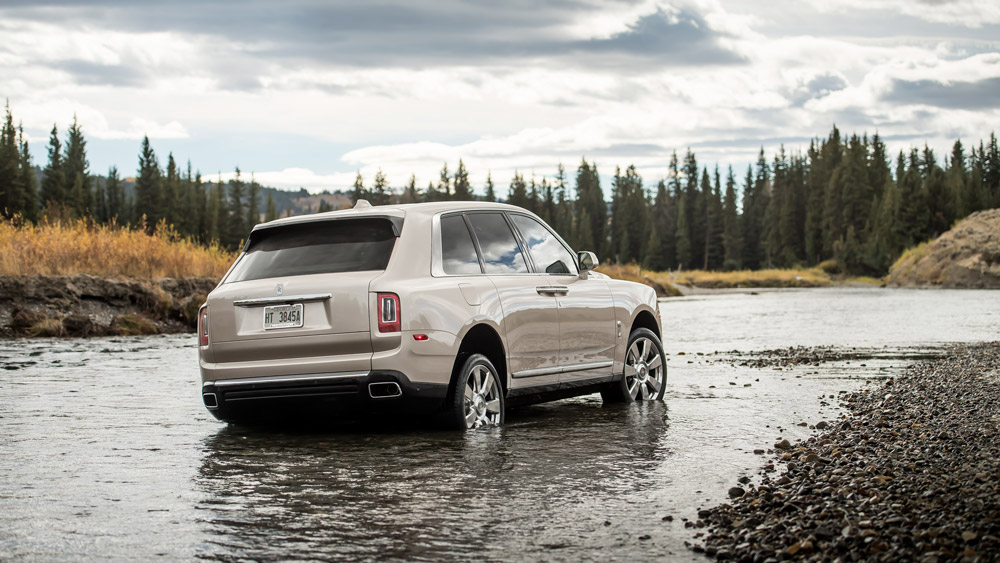 With such a lofty moniker, it is no surprise that Cullinan—priced from $685,000—is every bit a Rolls-Royce. Those centimetres—all 533 of them—are based on the new aluminium “Architecture of Luxury” first seen on the carmaker’s flagship, the recent eighth iteration of the Phantom. Such a modular architecture allows rapid chassis development, sharing sub-frame components and optimising platforms for specific models in a way that conventional design and construction cannot. The new architecture trims the Cullinan to a fighting weight of 2.7 tonnes; though still massive, its lithe handling and effortless steering are remarkable. At nearly 60cm shorter than its Phantom sibling, the Cullinan is of course taller, though no wider. That height combines with a seating position that makes driver and passenger feel like royalty, combining throne-like comfort with a commanding view of the road ahead.

We met up with the Rolls-Royce team for the global launch of the Cullinan in Jackson, Wyoming, an ideal venue to explore the full range of its capabilities (and those of its drivers). With an elevation starting at more than 1828 metres and climbing, the weather was perfect and cold, with snow on the tips of the Tetons but not yet on the roads. Which wouldn’t have mattered a lick, considering the other impediments that the Cullinan dispatched as casually as an elephant whisking an annoying oxpecker off its backside with its tail. 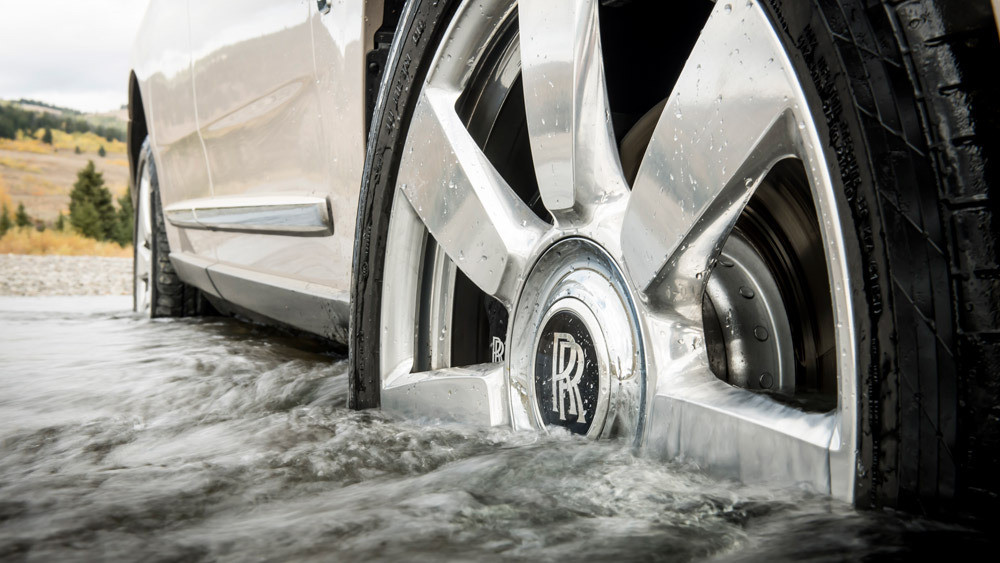 A huge part of the Cullinan’s invincible performance is down to its drivetrain. The old saying that “there’s no substitute for cubic inches” rings true, with nearly seven litres being displaced from the Cullinan’s V12 engine. Accelerate with intent, and there’s simply nothing quite so intoxicating as all that air pumped by a dozen pistons nearly the size of Andy’s Campbell’s Soup cans—power, smooth as cream of tomato, ladled on at just 1600 rpm. All that stump-pulling torque is welcome when the going gets tough, whether extracting lesser vehicles from the mud or chugging up a snowy road on a mission to hit the slopes. Hooking up all that power to terra firma (or infirma) is a satellite-aided ZF eight-speed automatic transmission that anticipates road conditions based on GPS navigation data and selects gear ratios in nanoseconds. Unlike any previous road-going Rolls-Royce, the Cullinan is full-time all-wheel drive, a virtual necessity for off-road driving. Rear-wheel steering (a system employed on the new Phantom) effectively shortens the wheelbase for tight manoeuvres, and enhances handling response overall. When traversing anything but dry tarmac, one of five optimum drive modes is automatically selected with the push of a single console-mounted “Off Road” button, which sets traction and air-suspension ride-height settings for every road condition. That ride height, by the way, elevates the Cullinan sufficient to traverse a 55cm body of water. 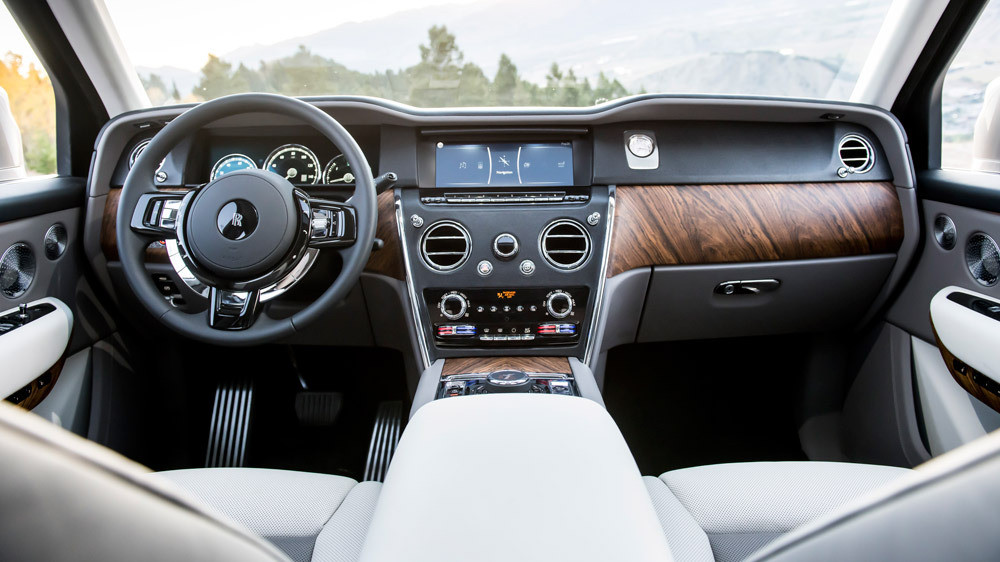 Our first off-road antic had us storming up one of the steepest ski slopes in Jackson, and down just as easily, engaging the “Hill Descent” button that made our trip down as rock-steady and resolute as a pack mule on its way to the bottom of the Grand Canyon. Special mention goes to the 22-inch wheels and model-specific tyres—fronts are foam-filled—developed just for the Cullinan. Although low in profile, they transmit virtually no vibration through to the fat steering wheel, and seem impervious to jagged rocks, washboard dirt, loose gravel and the many serious ruts and gullies we traversed on miles of unpaved roads. Wisely, we kept a healthy distance from numerous heavyweights we encountered, like moose, elk, and bison, all of whom returned the favour.

Through it all, over every surface, the Cullinan fairly wafts along, delivering what Rolls-Royce calls its “magic carpet ride,” an otherworldly sense of somehow floating above the fray, unaffected by the noise and vibration that accompany other automobiles. Whether many Cullinan owners will ever turn a wheel in off-road anger, it’s nice to know it can effortlessly run with all but the most single-purpose, desert-rat off-road machines.

The anomaly, of course, is that even when tackling severe off-road challenges, the Cullinan is so eerily quiet inside. Engineers went to extremes to maintain silence at all costs; transmission of road noise through the wheels and chassis, and wind noise—despite its Brinks-truck-like affront to aerodynamics—is nearly absent at speed. That same quiet enhances a luxurious interior equaled by few automobiles, and certainly no other SUV. 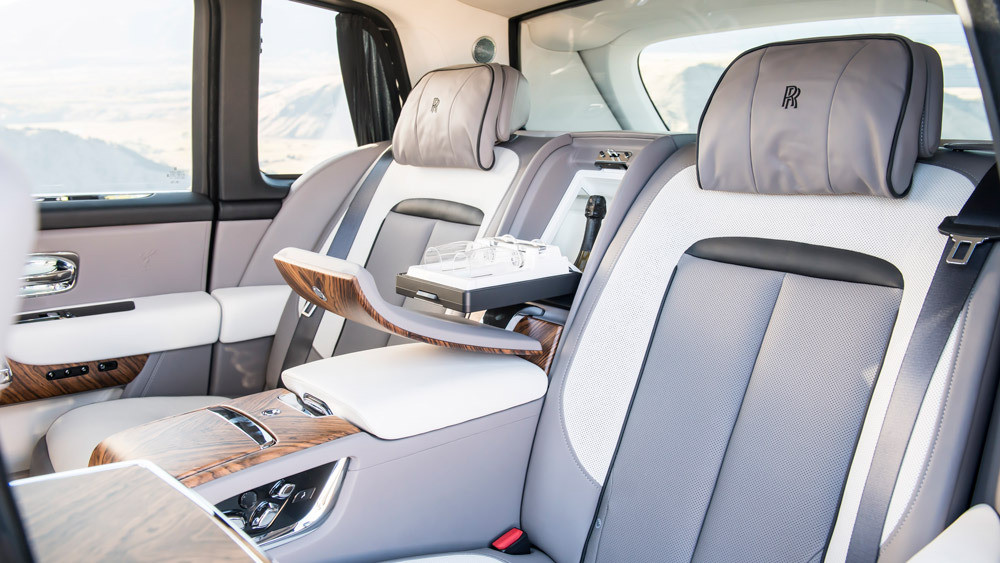 Coach doors—“suicide doors” to pre-War car buffs—open to reveal a ranch-worth of the finest leather. Soft, supple, and probably quite tender, one might imagine a herd of Wagyu Kobe hides adorning all four of the Cullinan’s sumptuous sofas. Naturally, upholstery choices are plentiful, limited only by imagination and colour preference. The upper dash is finished in box-grain leather (think high-end Italian purses and luggage), with leather, carbon fibre, or book-matched wood veneers, including some in a beautiful open pore. Bright chrome embellishments for switchgear and ventilation contrast with elegant matte aluminium trim, adding just the right amount of “jewellery” to brighten up the interior. Digital instruments with virtual needles convincingly replace conventional analouge faces. A touch-sensitive central screen and central rotary controller allow driver and passenger to manage infotainment and cabin functions, while the aforementioned buttons adjacent to the rotary knob control “Off-Road” and “Hill Descent,” plus air suspension height adjustment.

Two rear-seating configurations are available; lounge seats or individual seats, both of which position rear passengers higher than those in front—Rolls-Royce calls it pavilion seating—with the view enhanced by a panoramic glass roof and large side windows. Lounge seating is the more practical, accommodating three passengers, with seatbacks that lower automatically to provide a flat load area. With the latter option, two opulent rear seats that offer limousine luxury are separated by a fixed center console incorporating a drinks cabinet with refrigerator, champagne flutes, whisky glasses, and decanter. With individual seats, a rear glass partition wall separates occupants from the luggage compartment, ensuring silence and refinement absent from “two-box” SUVs. With either seating configuration, access to the rear is through a two-door lift gate—upper and lower—that Rolls-Royce calls “the Clasp,” automatically opening and closing, of course.

Whichever way one chooses to employ the Cullinan, whether as a high-riding luxury cruiser or pressed into service as an off-road warrior, this motor car reflects its Rolls-Royce pedigree through thick (mud) and thin. No matter what the job, the Cullinan remains as composed as the Phantom, but is always ready to change from business attire to a Superman outfit when duty calls. Butterfly or bee, the Cullinan is a real knockout.