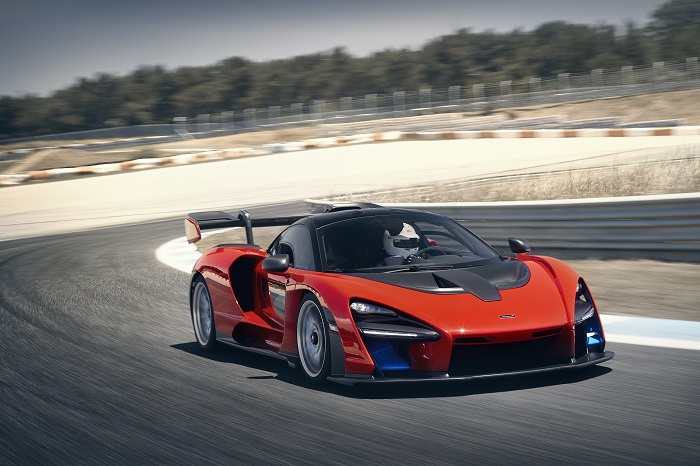 All hail the new King of the Road.

The Senna shares its core architecture with McLaren’s less exotic offerings, but it is born from a highly mutated strain of the brand’s core DNA. At its heart lies a development of the carbon-fibre structure of the 720S, plus a turned-up version of that car’s 4.0-litre twin-turbo V8, now delivering a peak of 800hp (588kW.)

Even more effort has been expended on improving the other side of the power-to-weight ratio, with an aggressive diet that has pared the Senna’s mass back to just 1198kg in its lightest configuration; about the same as an average shopping spec supermini.

The weight has been achieved through the use of exotic materials, but also a near total lack of anything non-essential. There are no carpets, minimal soundproofing and seats that consist of padding applied directly to a lightweight carbon frame. 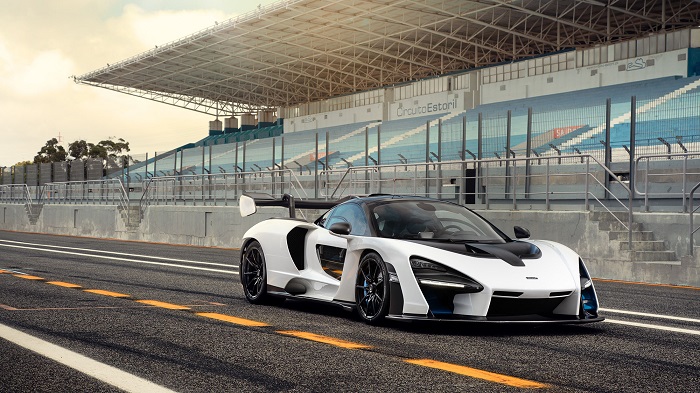 For those determined to shed every surplus gram it’s even possible to choose a car without air conditioning, although McLaren admits that just two of the 200 cars that have already been specified have been ordered without it.

But the deadliest of the Senna’s killer statistics isn’t power, weight or even the potency of its acceleration – McLaren claiming a credibility stretching 0-200km/h time of just 6.8 seconds – but rather, downforce.

The Senna might not be the most elegant-looking hypercar, but its form follows the functional requirement to extract an unprecedented amount of assistance from the passing airflow. The huge rear wing makes up to 500kg of downforce, the other elements and the huge rear diffuser adding another 300kg. At the 250km/h where downforce peaks, the Senna’s Pirelli Trofeo R tyres are being pushed into the ground by a force two-thirds greater than that delivered by gravity alone.

To experience the Senna in its natural environment McLaren took me to the Estoril circuit in Portugal, location of Ayton Senna’s first ever Formula 1 victory. I got 12 laps in the car, split into two stints, but although more of an amuse bouche than a banquet, it was enough to prove that the Senna is a genuine reset moment; this is the supreme hypercar of the moment. 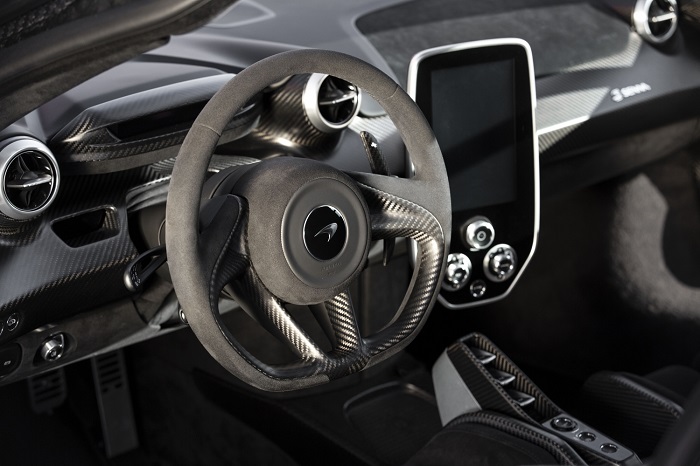 Before experiencing the Senna I’m sent to learn the track in a 720S; McLaren’s already hugely potent supercar has been turned into training wheels. The circuit includes two long straights, some tight and technical sections, but also the spectacular Turn Five, a very fast right-hander that my instructor assures me that the Senna can take flat-out.

Before getting into the Senna’s minimalist cabin, there is a broad hint at the raised speeds to be expected with the need to don a full motorsport-style HANS device. Starting the engine means reaching for a button in the ceiling, and even through the sound insulation provided by a full face helmet it sounds immediately louder and angrier than the 720S did. Even rumbling down the pit lane it feels taut and obviously keen to turn. I’ve been told to build speed gradually to bring the tyres up to temperature, but I drive half a lap at a speed that would have felt daring in the 720S.

This is definitely a car that you have to build up to. Even supercar veterans will need to acclimatise to the difference the huge downforce makes to corner speed and braking points. 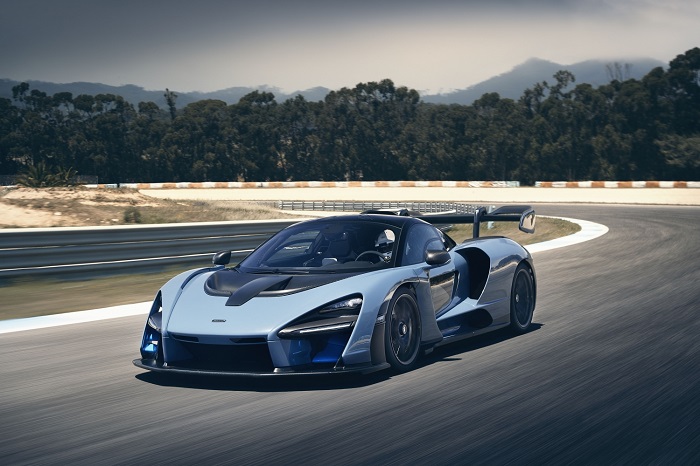 Yet it’s not scary, even at the lower velocities where there is much less of the traction-boosting Hand of God effect from the aerodynamics.

Downforce is what turns it truly special, adding significantly to the speed the Senna can carry through the faster part of the circuits. It’s a point made when I realise I’m attempting several corners using the same gear I was in the 720S, which is suddenly too low.

While I’ve driven cars with significant aerodynamic grip before, the Senna feels different to all of them – without the sensation of the car getting heavier as speed adds assistance. Its steering doesn’t require more muscle to operate – feeling as deft and accurate at 250km/h as it does at 100km/h – nor does the already firm ride grow noticeably stiffer. 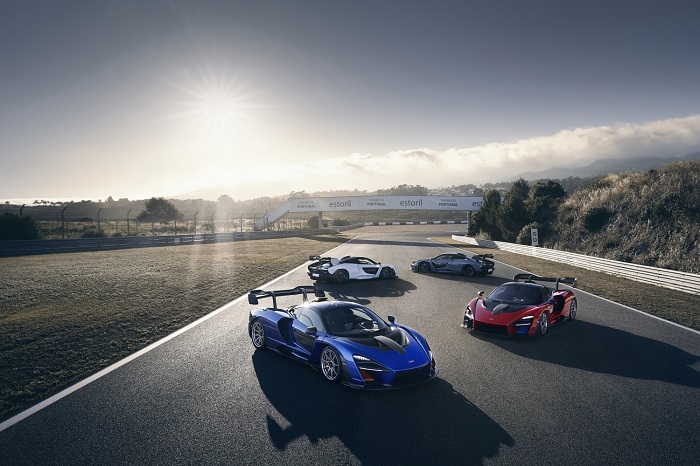 Nor is the Senna just about cornering speeds. Performance is as huge as the official numbers suggest, the forces pushing me into the seat under full acceleration barely diminishing even as the speedometer relays increasingly unlikely numbers. The Senna is approaching 300km/h at the end of Estoril’s main straight, but braking for the tight Turn One can be left until after the car has passed the 200-metre board and still make the corner with room to spare. The brake pedal is very firm, but feel is superb, and the twin-clutch gearbox shifts pretty much instantly.

The high-speed Turn Five is more of a challenge, but on the very last of my allotted 12 laps I manage to keep my foot flat to the floor as it grows bigger in the windscreen and all the way through it. The Senna takes the kink with a complete absence of drama; I’ve almost sweated through my racesuit.

The Senna is an amazing car, but also a serious workout. The extra physical strain of operating a car capable of producing so much G-force in so many different directions soon adds up. If owners aren’t in prime shape when they take possession they will be considerably fitter at the end of a few trackdays. 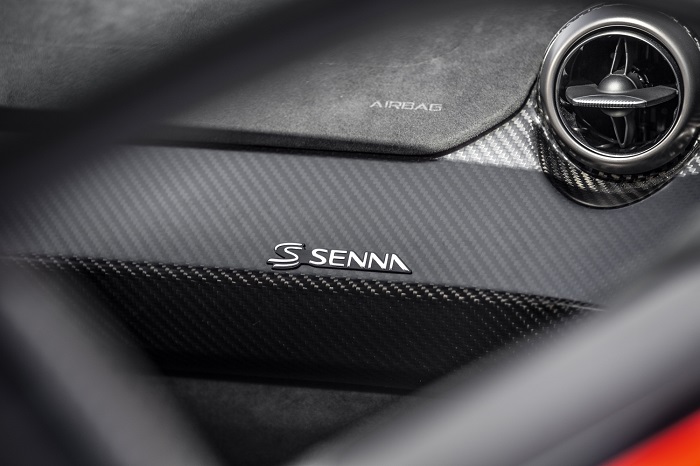 Not having driven a car on road would, normally, limit me to a partial judgement, but that’s really not the case with the Senna. It’s been designed for the circuit and McLaren openly admits that has led to some serious compromises on everyday usability, not least luggage space limited to a helmet-sized aperture behind the front seats; it doesn’t sound particularly pleasing either – loud rather than melodious.

Some buyers will undoubtedly use it for road trips, but that will be in willing acknowledgement of its limitations; McLaren has already announced another Ultimate Series car for those wanting a more road-biased offering, the production version of the ‘BP23’ three-seater set to be unveiled later this year. The fact that the entire production run of 500 Sennas had been sold before the first car left the factory is proof that McLaren has hit upon a winning formula. For now, this is the ultimate road-legal track car.