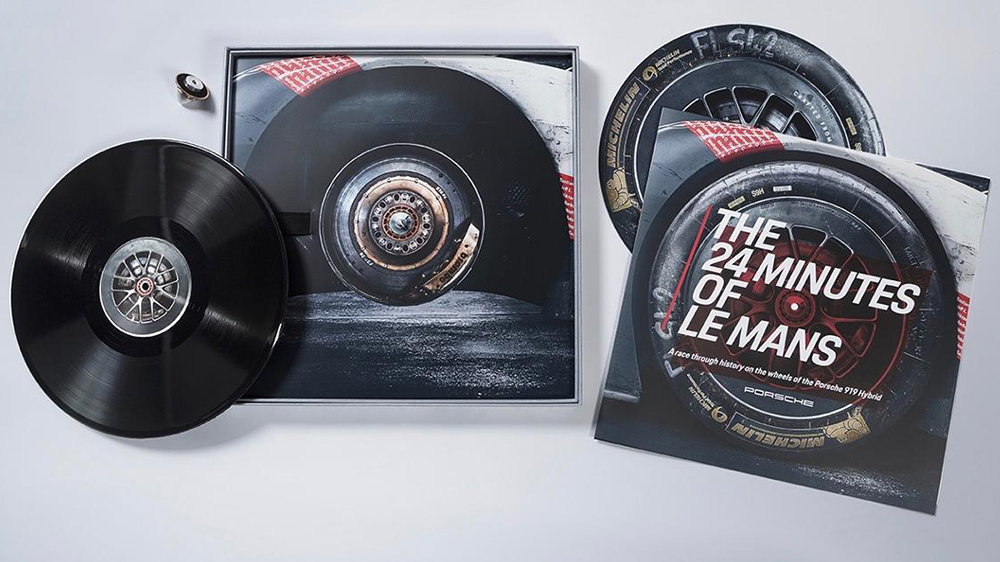 Each of the 200 records is 24 minutes long and tells 24 championship stories.

For the most part, race tires have short, sweet lives. They dutifully serve their purpose, providing optimal grip for as long as possible. When they’ve given their all and propelled a race car to the front of the pack or the top of the podium, the worn rubber is ripped from the car and unceremoniously tossed into a trailer that will take them for proper disposal—so it goes, 99.9 percent of the time. Porsche has chosen to explore the 0.1 percent by making incredible art from the Le Mans-winning 919 Hybrid tyres.

The Michelin tyres were taken directly from the 865kW 919 Hybrid—an electrically-assisted missile that streaked its way to first place plenty of times while competing in the World Endurance Championship’s LMP1 class—and shredded. That rubber was repurposed into a vinyl record, upon which 24 incredible tracks were pressed. Each track is about a minute in length, and each one tells a glorious story of a triumphant moment in Porsche’s lengthy and storied racing history.

Included in the record, dubbed “The 24 Minutes of Le Mans,” are the beautifully composed tales of the 356 SL’s victory at the famed French circuit in 1951, the “darkest hour” of 1986’s race and “five tyres in one race” from 1982. Voices from a number of famous faces are heard, including Hans-Joachim Stuck, Derek Bell, Dr. Wolfgang Porsche, Walter Rohrl and more. There’s plenty of high-revving Porsche heaven underscoring all the tracks, so you feel like you’re transported directly to the Mulsanne Straight or to the Porsche Corners.

Only 200 records were produced, and 24 of them went up for auction yesterday, with proceeds headed to Loisirs Pluriel, a French non-profit that aids disabled children. It’s unclear where the remainder of the records will go, but if you missed the boat on the auction and still want to hear the terrific tales, Porsche has kindly uploaded the full album to a number of free streaming services and platforms. Check it out on Spotify, Apple Music, Amazon Music, Youtube, or Soundcloud.