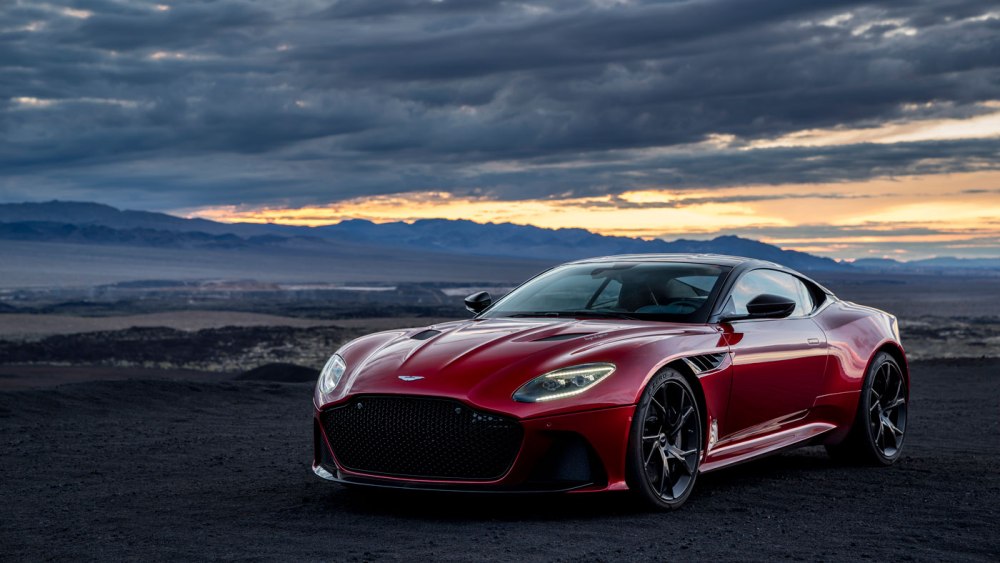 The British marque’s new flagship GT pays tribute to a collaboration with coachbuilder Touring in the 1960s.

Look at the new Aston Martin DBS Superleggera, which has just been unveiled at an event in London, and what do you see? According to chief designer Myles Nurnberger you should be seeing rippling muscles under a tight-fitting suit. “The Vantage is our hunter, the DB11 is our gentleman and the DBS is our rogue,” he told Robb Report at a preview event, “internally we’ve called it ‘the brute in the suit’.”

The replacement for the Aston Vanquish carries on where its range-topping predecessor left off. It shares most of its mechanical package and a fair amount of its core structure with the DB11, but gets more power, an aggressive visual makeover and the guaranteed exclusivity that comes from a substantial price premium over the DB11. 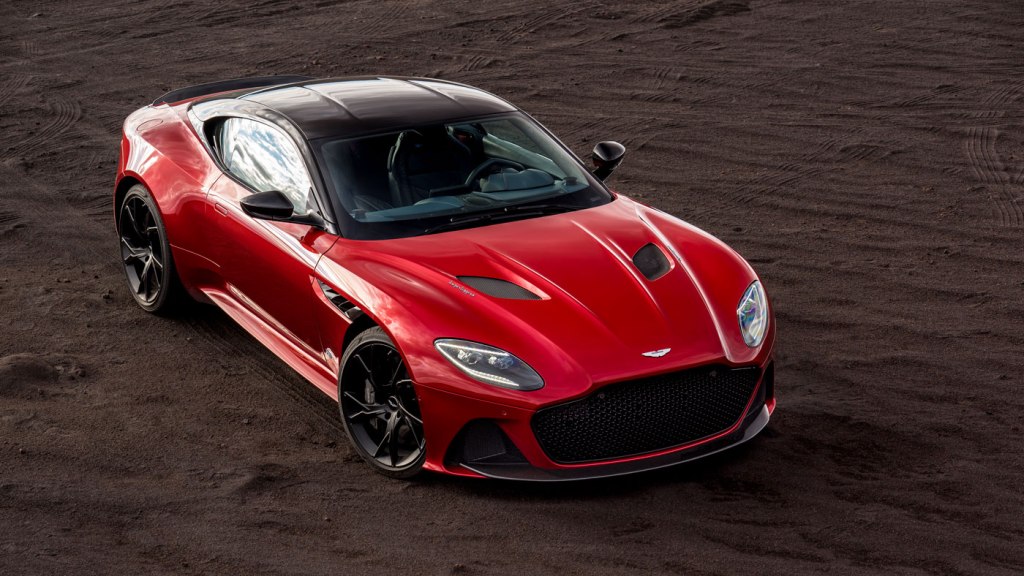 Aston Martin’s Sports Plus performance seats offer are as eye-catching as they are comfortable. Photo: Aston Martin

The DBS uses the same twin-turbocharged 5.2-litre V-12 that features in the DB11, but which has been retuned to deliver a brawny 725hp, nearly 100hp more than even the turned-up ‘AMR’ version of its smaller brother makes. This is accompanied by 900Nm of torque all the way from 1800rpm to 5000rpm, with Aston’s chief engineer Matt Becker being particularly proud of a new exhaust system intended to help with the motor’s more aggressive character.

Transmission is an eight-speed automatic and we’re promised that the DBS will be able to dispatch the zero to 99kmh acceleration benchmark in just 3.4 seconds, get from zero to 160kmh in 6.4 seconds and will go onto a top speed of 339 kmh. In-gear acceleration is said to be faster than a Ferrari F12. 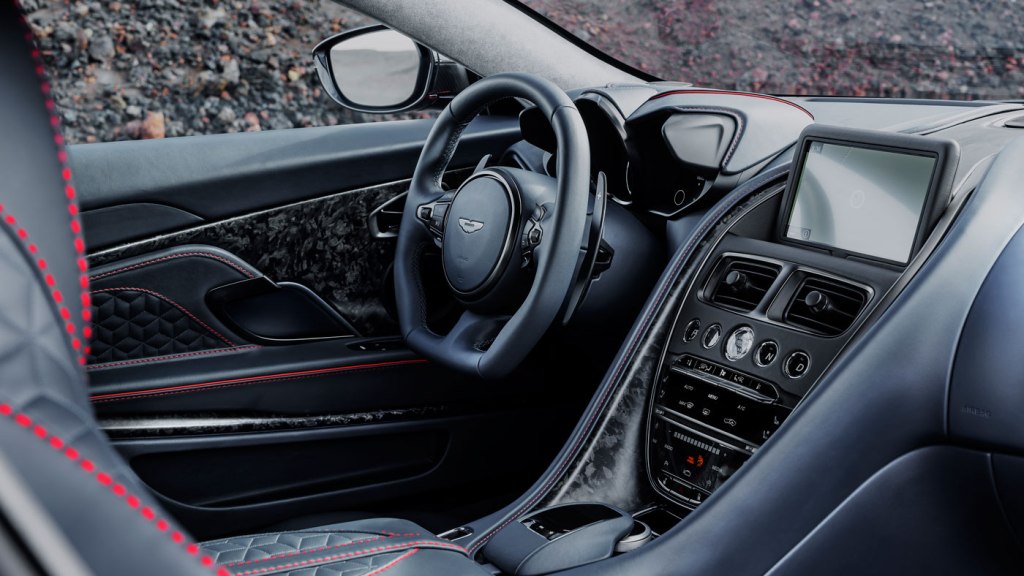 Engineering has focused on more than just pace, though. The DBS gets an advanced aerodynamic package incorporating both a hidden ‘aeroblade’ rear wing – which channels air from intakes on the side of the car and replaces a traditional element – as well as a sizeable double diffuser at the back. Becker claims that peak downforce is 180kg, the most of any production Aston, enhancing high-speed stability. It also has firmer suspension settings than the DB11, changes to reflect its more dynamic focus; while the DBS is definitely more a grand tourer than an out-and-out sportscar, Aston believes that owners will still be keen to explore the twistier parts of the map in it.

Design builds on the DB11 that lurks underneath; both cars share the same glass and doors. The DBS has a far more aggressive front end, with a huge mesh grille flanked by secondary air intakes, as well as wider and more muscular haunches and a motorsport-style vent at the trailing edge of the front wheelarches. Apart from some different trim and more generous standard equipment the DBS has a near identical cabin to its cheaper sibling, too; one area of mild disappointment considering the price premium it commands. 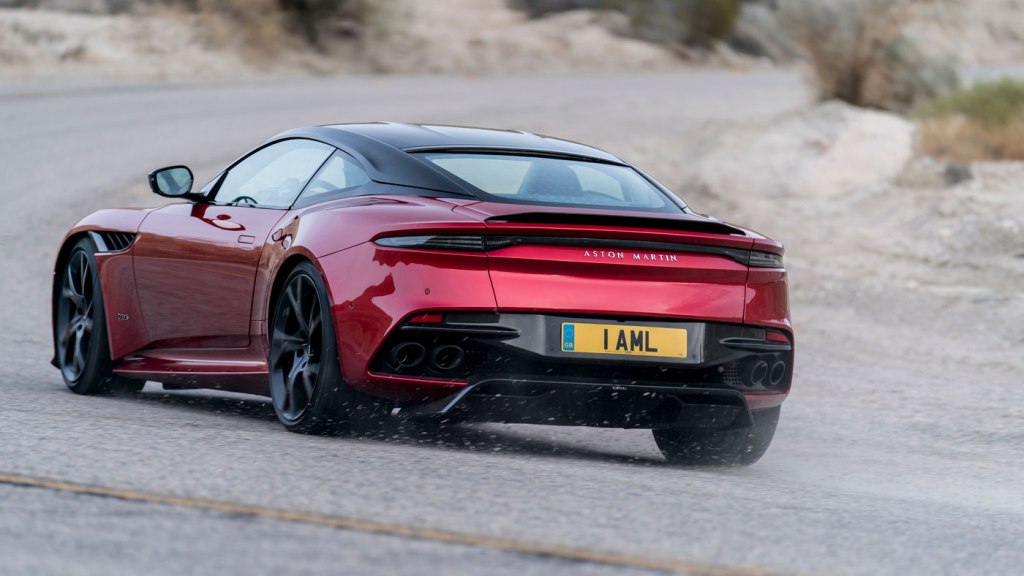 Aston says that only “low hundreds” of the DBS Superleggera will be produced each year. Photo: Aston Martin

As for the Italian connection as referenced in the name, and the discrete “Superleggera” badges on the bonnet? They are referencing the “super light” construction technique pioneered by Italian coachbuilder Touring and which was used on earlier Astons including the DB4, DB5 and DB6.

Aston says that only “low hundreds” of the DBS Superleggera will be produced each year. And while we have mostly resisted the urge to make any reference to Britain’s most famous fictional spy, it goes without saying that the new DBS would represent a major upgrade if it was to be featured in 007’s next cinematic outing.