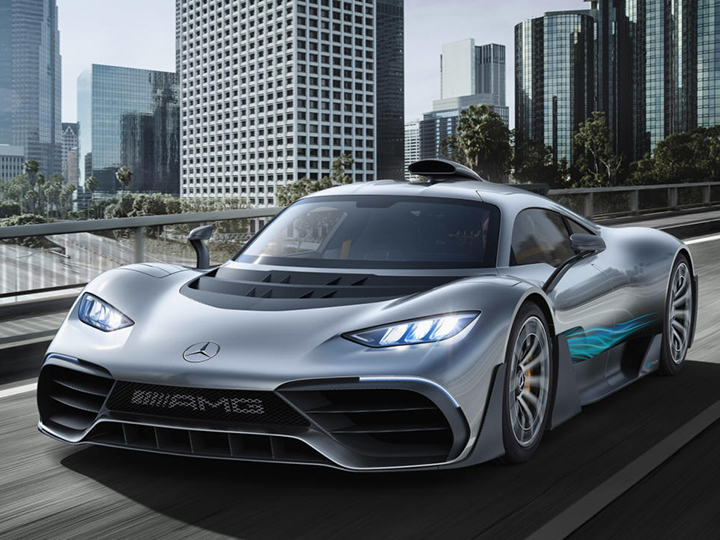 The Project One is conceived as a vehicle that redraws the parameters of what is possible for a two-seat sports car.

The long-mooted Mercedes-AMG hypercar, dubbed Project One, is now a step away from reality after making its world debut on the Mercedes-Benz stand at the Frankfurt motor show overnight.

The Project One is conceived as a vehicle that redraws the parameters of what is possible for a two-seat sports car, squeezing seemingly impossible performance from a tiny F1-derived powerplant and putting it on the road to create improbably quick acceleration.

How’s this for headline figures – 1000 horsepower, or 745kW, from a 1.6-litre V6 engine that enables the Project One to blast to 200km/h in under six seconds. That relegates the likes of the Bugatti Veyron Super Sport (6.7 seconds) and the McLaren P1 (6.8 seconds) to mere dots in the rear-view mirror.

The big numbers don’t stop there. It’s expected that just eight editions of the Project One hypercar will make their way to Australia, each with a sticker price of around $3.38 million. The deposit alone will set back Mercedes-Benz Australia customers a cool $500,000.

The size of the engine relative to the prodigious performance is a key indicator of the technology at play beneath the slippery outer shell. The 1.6-litre V6 is more closely related to the powerplant developed by the company’s world championship-winning Formula 1 squad than in any previous production car, revving out at more than 10,000rpm. The hybrid, turbocharged combustion engine combines with four electric motors to achieve a top speed of 350km/h, while simultaneously being capable of purring around town in full electric mode for up to 25km.

In spite of whopping carbon ceramic brakes on all corners, Mercedes-AMG says up to 80 per cent of regular braking will be handled by the electric motors, boosting energy regeneration whilst also minimising wear on other components.

Mercedes-AMG says the concept car presented at Frankfurt is close to the final production model, and the first examples are expected to be delivered to Australia by the end of 2019.

A Night In Roma

We took Ferrari’s beautiful new Roma for a belt about Brisbane.

The shooting brake-style EV will be available in four models—the 4, 4S, Turbo and Turbo S.

The Second Ever 1958 Aston Martin DB4 Could Be Yours

The rarity is one of the most important cars in the marque’s history.