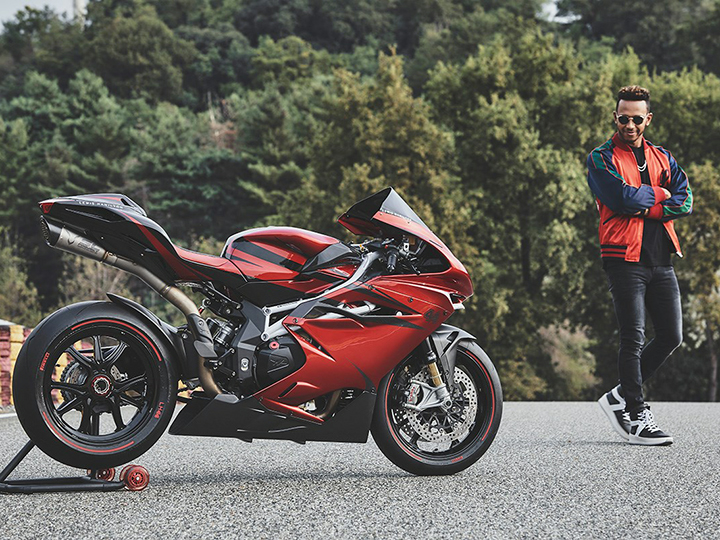 His F1 car may be automotive unobtainium, but at least it’s now possible to own the superbike that Lewis Hamilton rides.

The car in which Lewis Hamilton dominates the Formula 1® world championship may be the automotive embodiment of unobtainium, but at least it’s now possible to own the superbike he rides. The MV Agusta F4 LH44 is based on MV Agusta’s production F4 RC, which itself is derived directly from the Reparto Corse Superbike. The LH44 model celebrates the number that Hamilton races with in F1, and the production run will be limited to – you guessed it – 44 bikes.

It’s equipped with a four-cylinder Corsa Corta engine outputting 151kW – more than many small sedans – with the wick able to be turned up further to 158kW by a standard kit that includes a titanium silencer and dedicated control unit.

The LH44 is the result of a lengthy development process between Hamilton and the MV Agusta factory in Varese, Italy, a company spokesperson said. “The creative process was long, with attention paid to the bike’s every last detail. Each individual idea was meticulously assessed and checked in terms of its feasibility, flair and functionality.” Hamilton, a brand ambassador for MV Agusta, says the project enabled him to combine his love of sports bikes with an interest in creative design. “I love working with Giovanni (Agusta) and the guys at MV Agusta, their passion for engineering and attention to detail produces stunning, original-looking bikes,” he says.

“(The F4 LH44) looks quite stunning and I had the pleasure of riding on track a few weeks ago in Italy. It feels great and combines the best of both worlds, a race bike for the road!” Retailing for $95,000 and with only 44 editions available worldwide, the Australian allocation of the the MV Agusta F4 LH44 is limited. MV Agusta Parramatta is taking orders now.