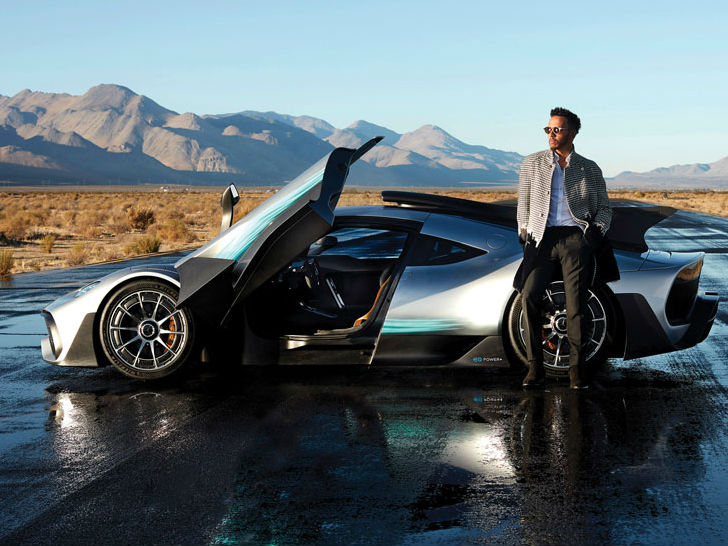 The Formula 1 phenom has long championed for the new road rocket.

Lewis Hamilton greets me in his air-conditioned trailer holding a box of raw cremini mushrooms. “Want one?” he asks, extending his arm. I decline. “Suit yourself,” he says, and pops one in his mouth. “I quite fancy mushrooms. Well . . . not those kind of mushrooms,” he adds with a laugh.

He is still wearing the last look from his earlier photo shoot for Robb Report, an outfit he chose himself after eschewing a more traditional suit. The black trousers and houndstooth-and-velvet coat by Colombian-born designer Haider Ackermann are far too glamorous for our digs—a Star Waggon parked on a dusty runway in Inyo-kern, roughly three hours by car from Los Angeles in Southern California’s high desert. 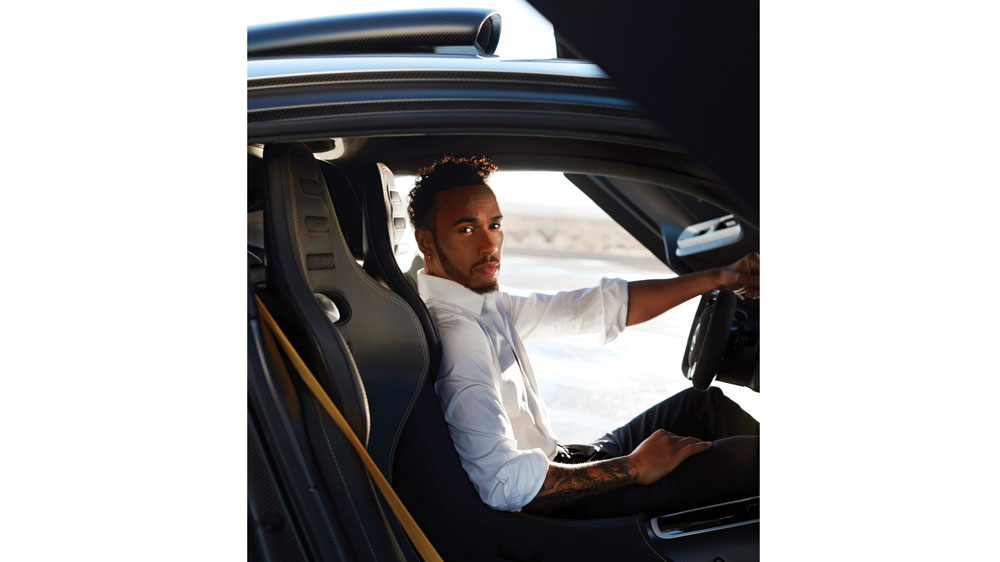 What the locale lacks in panache, however, it makes up for in scenery—an arid pastel landscape set against the Sierra Nevada foothills. For racing fans, Hamilton needs no introduction. Last year he earned his fourth Formula 1 world championship, putting him on par with Sebastian Vettel and Alain Prost and surpassed only by Juan Manuel Fangio and Michael Schumacher.

Back in 2007, I watched from turn 10 at the Circuit Gilles-Villeneuve in Montreal as the 22-year-old rookie won his first F/1 race, a victory he claimed without ever having previously raced at that circuit. (He attributed his knowledge of the track to racing simulators.) When he earned his first world championship a year later, he became the youngest driver ever to claim the title. In 2013 he signed with the Mercedes-AMG Petronas Motorsport F/1 team and went on to win three more world championships, the most recent being last year. 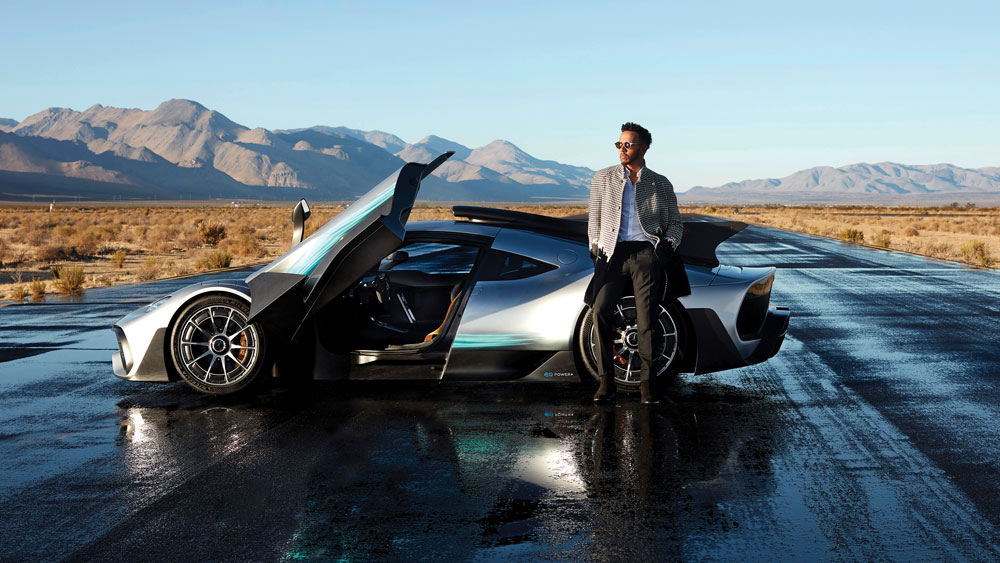 Setting a new paradigm for Mercedes-AMG, Project One packs more than 1,000 hp and plenty of Formula 1 functionality. Photo by Jonathan Glynn-Smith

Of course, Hamilton didn’t do it alone. His accomplishments are shared with the hundreds of men and women who work long, hard hours in design studios, laboratories, and garages, creating and perfecting some of the fastest, most technologically advanced cars in the world. Although Mercedes dominated F/1 racing in the 1930s with its famous Silver Arrows, the German automaker was absent from Formula 1 (aside from a brief return to the sport in the 1950s) until 2010, when it bought a minority stake in the Brawn GP team and kept F/1 heavyweight Ross Brawn on as team principal.

In a move that shocked the Ferrari tifosi, Mercedes even enticed Michael Schumacher—who had spent the majority of his career driving for the Italian marque—out of retirement for its first three seasons. Since then, the Mercedes-AMG Petronas Motorsport F/1 team has gone on to rule the sport, claiming the constructor’s championship every season for the past four years.

But we haven’t trekked to the middle of nowhere to rehash past wins. (Hamilton doesn’t watch them anyway, he tells me.) Mercedes-AMG has brought its first hypercar, Project One, to the desert and offered Robb Report an exclusive look at the vehicle with one of its biggest proponents. 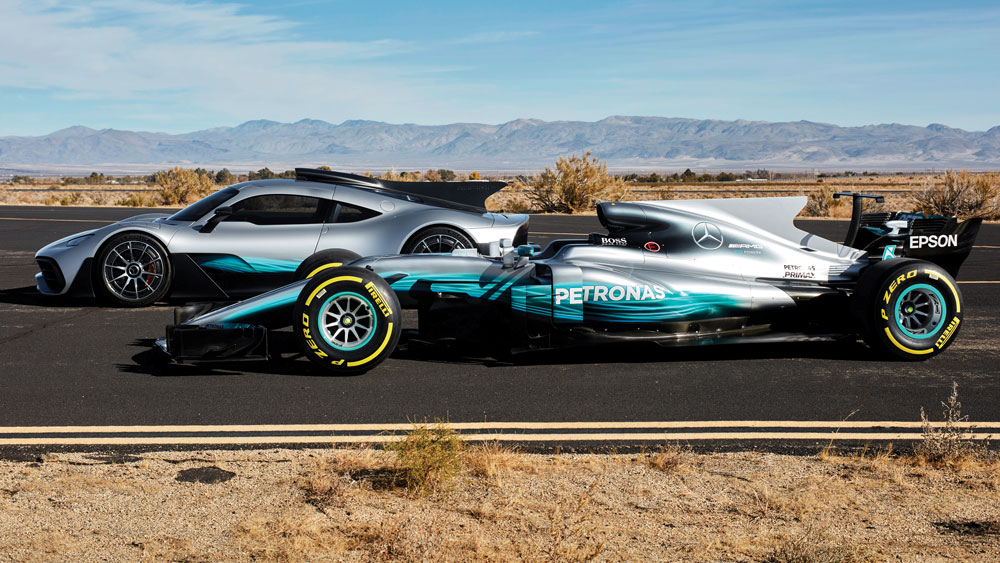 Project One by Mercedes-AMG Photo by Jonathan Glynn-Smith

First shown last year as part of AMG’s 50th anniversary, Project One is the company’s answer to the Porsche 918 Spyder and the forthcoming McLaren BP23. The limited-edition halo car takes most of its workings straight from Formula 1, packed into a breathtaking example of style and performance for the road.

With a price tag of about $2.7 million, Project One will be limited to 275 examples—and the waiting list is already three or four times that number. It will use a high-performance plug-in hybrid drive system—that comes directly from Formula 1—combined with a 1.6-liter turbocharged V-6. Although exact specifications of the mid-engine production car were not available at press time, AMG chief Tobias Moers has said Project One will produce more than 1,000 hp and reach a top speed of nearly 220 mph. Hamilton says it’s about time. 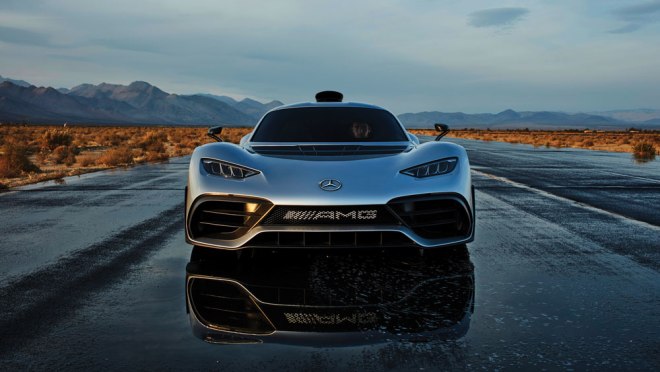 Project One by Mercedes-AMG Photo by Jonathan Glynn-Smith

“I’ve been nagging Mercedes for years, because we’re in Formula 1 and we have all this technology,” says Hamilton, who has pulled up a stool next to the sofa where I’m sitting. His box of mushrooms lies abandoned on the counter behind him. “We’re winning world championships, yet we don’t have a car that can match a Ferrari road-going car. So I guess they eventually decided this is actually a good idea. I’m not saying it was my idea, but I did nag them for ages to do it.”

As with F/1 cars, Project One’s monocoque structure is made of carbon fiber. Designers, led by Daimler design chief Gorden Wagener, followed the credo of “no styling,” so every detail is functional; there are no scoops, outlets, or power bulges merely for vanity’s sake. Flat LED headlamps frame the car’s face, which is dominated by a large front spoiler. A wasp waist, vertical shark fin, and long tail are all nods to racecar design. Inside the minimalist cockpit, fixed sculptural seats seem to flow out of the surrounding cabin.

Part of Project One’s achievement lies in the fact that so much F/1 technology will be applied straight to the production car. Certain features, like sequential (paddle-shifter) gearboxes, have trickled down from racing to road cars in the past, but the direct lineage has never been as clear as it is now. 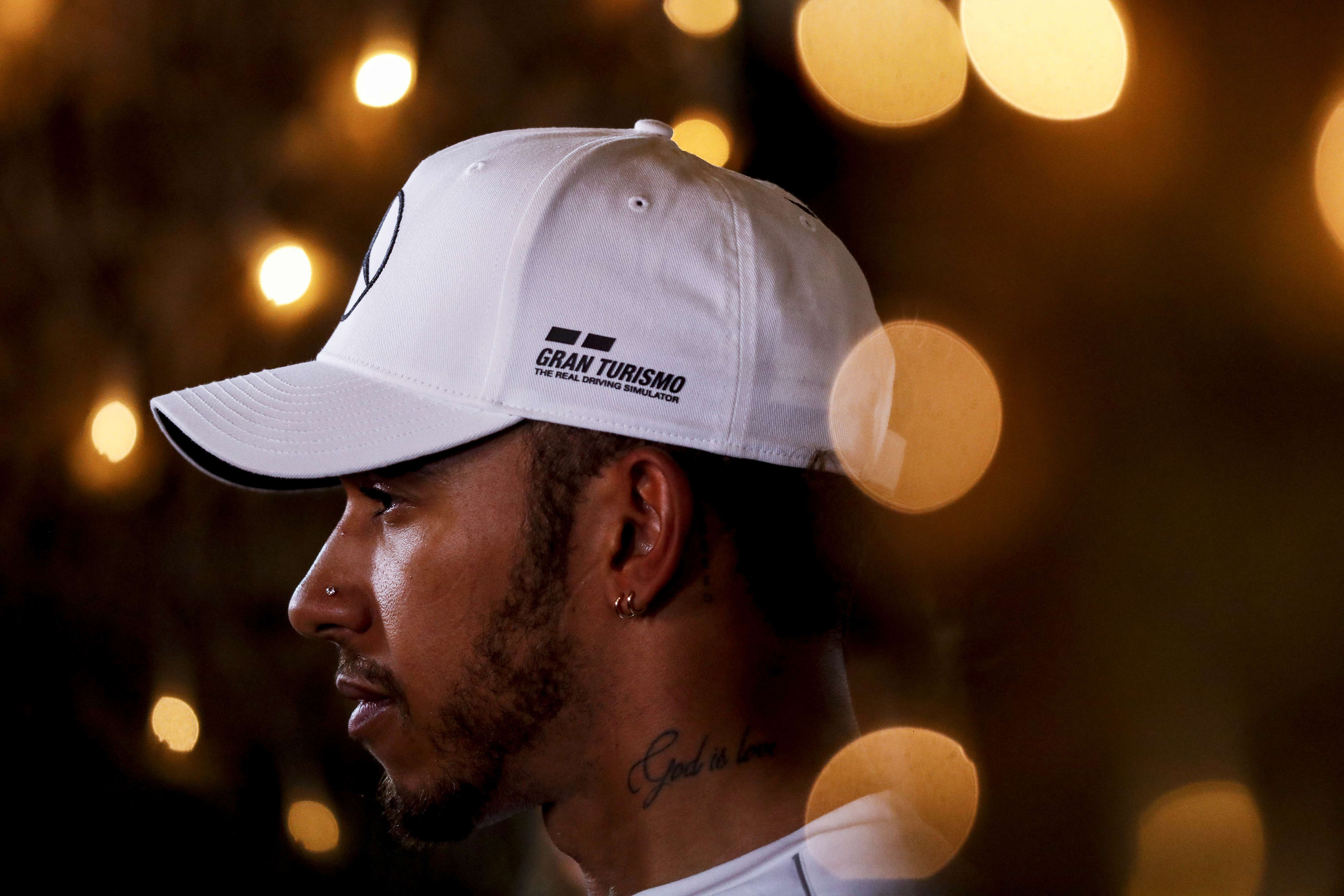 Project One, however, wasn’t always a clear fit for Mercedes-AMG. “I always thought AMG was not at the level to have a kind of super-, hyper—whatever—car. But I was approached by customers over the last few years, and that brought everything together,” Moers told us in a previous interview. Once the decision was made to pursue the project, the company was unwavering in the direction it should take. “We see major transitions in the automotive industry for the future, in all segments. It was very clear for us it would not be a V-8 or V-12 because that’s, well, I call it old school,” Moers added. “We are going to move on to electrified power trains and add more efficiency. With today’s spec of Formula 1, the door was opened to make this car happen.”

Bringing a car from the track to the street is not without its hurdles. In particular, the longevity of the engine is a major concern. In racing, an engine may be swapped out several times each season. And although the road car, according to Moers, will be assisted by two additional electric motors and rev at 11,000 rpm (compared with an F/1 car’s 13,000 rpm), the wear and tear will necessitate a complete rebuild after about 31,000 miles. “It’s the most challenging project we’ve ever done,” Moers said. 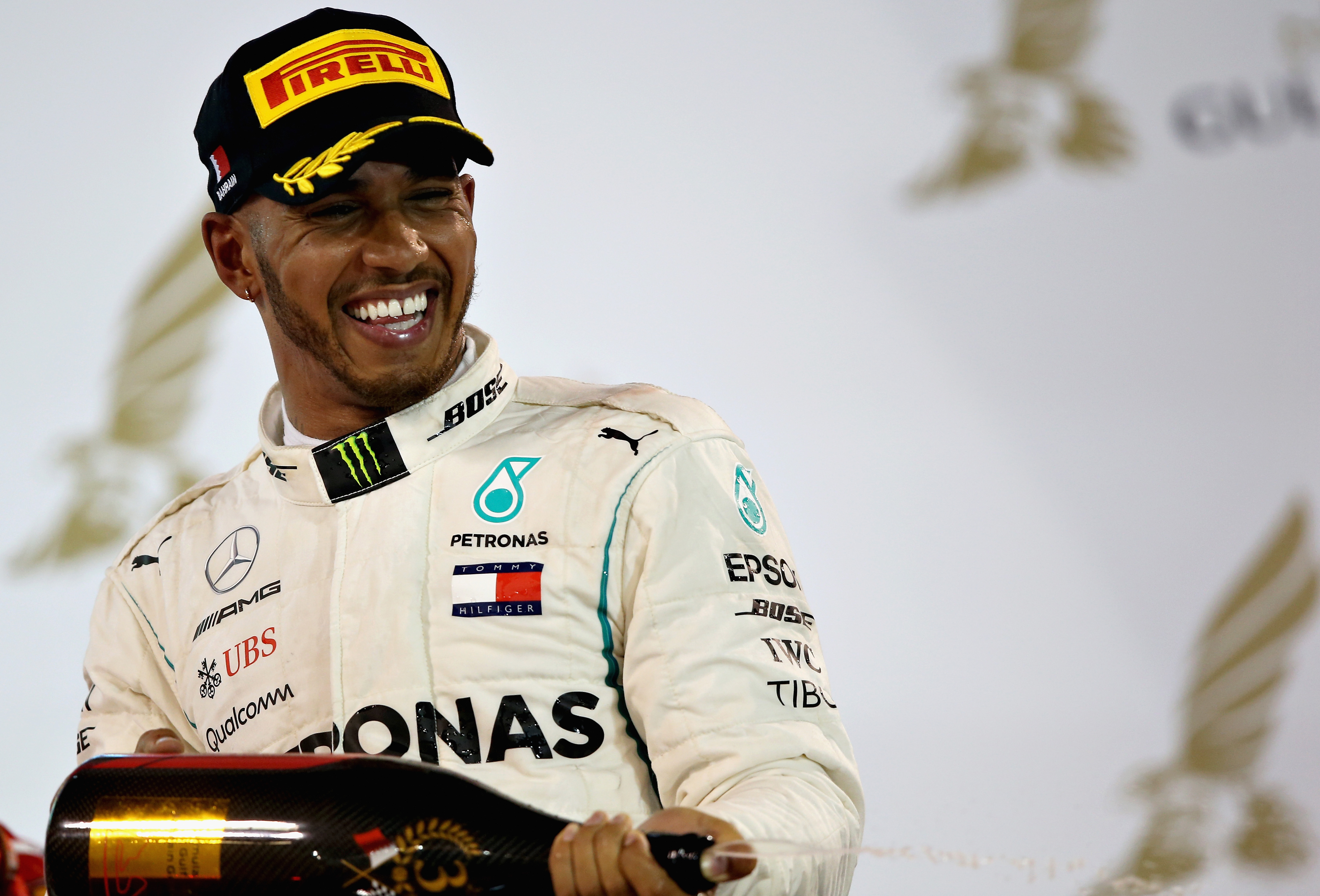 Never one to shy away from a challenge, Hamilton has his own opinions about the future of automobiles. When asked what he’d like to see in the next generation of F/1 cars, he does not mince words.

“I’d love them to bring back the stick shift, three pedals, less shit on my steering wheel, and a more raw racecar, but that’s not gonna happen,” he says. And what about autonomous cars? Will robots usurp drivers? “I’ll be long gone by then,” he says.

When asked about life after racing, Hamilton hesitates. “I don’t know, I’m in this discovery mode right now. I think fashion is an area which I am exploring, and I’ll always do music,” he says. “I was playing ‘Easy’ on the piano the other day, and I was thinking, how cool would it be if Lionel Ritchie was sitting here right now, singing this with me? Could you imagine?”

Yes, I could imagine. But while Lionel Ritchie might be easy like Sunday morning, Hamilton, for now, will be quite busy on those days. Between promoting Project One and preparing for the current Formula 1 season, he’s going to need a lot of mushrooms.