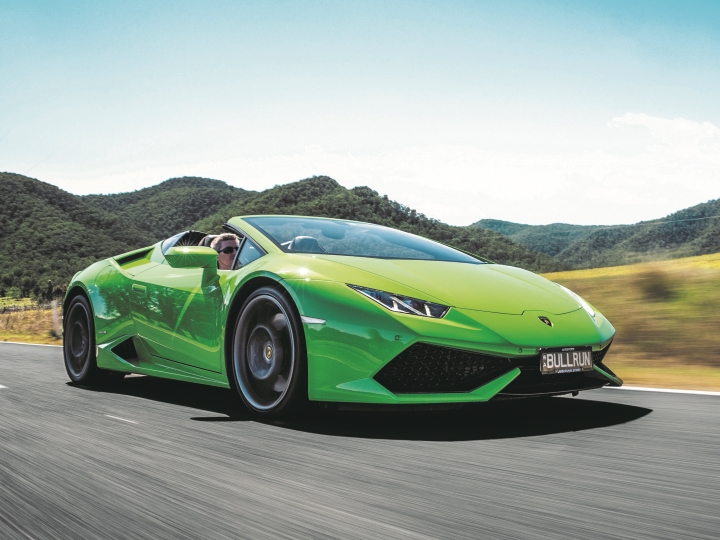 Lamborghini to the power of 10

Lamborghini’s drop-top addition to its successful Huracán range offers the purity of a naturally aspirated V10 in a lifestyle-oriented package.

If automotive arachnids aren’t exclusively indigenous to Italy, the world’s most venomous four-wheeled species are certainly typical of the Modena region.

The Huracán Spyder is the latest open-top supercar from Lamborghini, arriving almost simultaneously with the rival Ferrari 488 Spider. It replaces the Gallardo Spyder that set a sales benchmark for convertible Lambos, and lines up as the third variant in the Huracán range.
Where the LP610-4 is positioned as the performance variant, and the rear-drive-only LP580-2 as the fun-to-drive model, the raging bull brand describes the Spyder as the “lifestyle personality” of the trio. While it would be possible to wedge a surfboard into the passenger side of this Huracán, we imagine this branding has more to do with its outdoor accessibility.

The Spyder’s electro-hydraulic retractable roof – fabric again, in contrast to the metal chosen by Ferrari and another competitor, McLaren – opens in a slickly orchestrated 17 seconds. It does so even if you’re cruising along a city road at 50km/h.

It’s a fitting piece of street theatre for a supercar – especially our quasi-neon Verde Mantis-green example that further advertised the free show.

More importantly for the driver, the stowed roof permits a personal audience with the 10-cylinder choir sat immediately behind the two-seater cabin.

In this new era of the turbo, the 5.2-litre V10 remains commendably unassisted. The climate may be changing, but Lamborghini’s purist take on sucking it into an engine is clearly not.

Yet there is cylinder deactivation, which shuts off one bank of cylinders on part-throttle and gets its own dedicated symbol in the instrument cluster to indicate when it’s active. With the addition of stop-start, it contributes to a 14 per cent reduction in fuel consumption over the Gallardo. Just a partial prod of the accelerator pedal, however, will tempt drivers to expend every drop of 98 RON in the Spyder’s 83-litre tank.
Flick the steering wheel’s ANIMA (soul) switch from Strada to either the mid-mode Sport or racier Corsa and the acronym could be missing an ‘L’.

Flick the right paddle for a rapid upshift and a repeat of the climb, savouring the millimetrically responsive throttle, and you won’t care that the newer-fangled turbocharged rivals from Ferrari and Porsche are notably quicker. Keeping it in context, the Huracán Spyder is still blindingly fast. Three digits are reached in 3.4 seconds, just two-tenths shy of the lighter coupé twin, while maximum velocity is pure, exclusive supercar stuff at 324km/h.

Even beyond 200km/h, the cabin is sufficiently free of swirling air. With a combination of exhilarating acceleration and epic noise, only your senses are in danger of being blown away.

A rear window serves as a windshield or, alternatively, it can be lowered separately to act as a cheeky mini portal to that V10 sound when the roof is up. In full cocoon mode, more outside ambience and road noise penetrate the Spyder’s cabin than the coupé versions, though it’s still respectably quiet. From an important aesthetic perspective, the roof manages to retain the coupé’s constant, ultra-low arcing silhouette line that runs all the way from the front to the rear. The roof system and structural reinforcements for the technically interesting aluminium/carbon-fibre chassis and body account for an extra 120kg over the coupé, yet neither speed nor handling feel significantly diminished in comparison.

The Spyder, 40 per cent stiffer than its predecessor, is impressively resistant to body flex, its eagerness to turn into corners doesn’t feel tempered, and the standard carbon-ceramic brakes never feel overworked by the extra mass.

On dry roads, the all-wheel-drive Spyder’s natural on-limit behaviour is similarly to push wide at the front rather than push out at the rear, which is likely to be more of an assurance than a nuisance for target customers. Lamborghini’s optional Dynamic Steering is preferable when being worked hard, otherwise one is more conscious of the unpredictable moments of assistance that rob the Huracán of natural steering fluidity.

The suspension is at its most fluent in Strada mode – when the magnetic particles in the damper oil aren’t solidified for extra stiffness as in Sport or Corsa. The ride is still firm, but it’s more tolerable over a day’s driving compared with, say, an Aventador SuperVeloce.

The driving position is slightly weird due to offset pedals, though rear vision is rather more problematic. Beyond the tiny rear-view mirror, the Spyder’s rear deck obscures the lower half of any car behind.

The Huracán’s interior is still a visual event, even if the cabin of the twin Audi R8 Spyder due mid-2017 looks more luxurious. Following an overall theme that suggests the design team was paid by the hexagon, almost every conceivable shape inside the Spyder comprises six sides – at their most intensive with the honeycomb sections of the dash.

The Italian brand’s version of Audi’s Virtual Cockpit TFT configurable instrument display doesn’t escape the obsession, either, though the driver will be more focused on the clever, sharply detailed graphics – including the prominent ‘virtual’ rev counter.

There’s a strong hint of the Audi relationship in the infotainment dials and buttons on the centre console, though the row of console toggles and a missile-launching-style engine start/stop button complete the distinctively edgy look we’ve come to expect from a Lamborghini.

Multiple trim and colour options ensure your Huracán Spyder can look (relatively) understated rather than ostentatious, if you so desire. There are 17 interior colours and five trim choices, with either racy, suede-like Alcantara or more relaxed soft leather the dominant material.

And there are 19 exterior colours in a variety of solid, pearl, metallic or matt finishes, matched to the fabric roof available in either black, brown or red.

While the retractable roof singularly differentiates the Spyder from the coupé, the hero of the Huracán remains that V10. Almost decadent in this day and age, this atmosphere-ingesting artwork – with its responsiveness and linear power delivery – is one to cherish, before such engines are fossilised in a turbocharged, hybridised or fully electric future.