The marque’s exterior design manager walks us through the complicated process and points out the meaning behind the model’s additional exterior flourishes.

You see the gaping grille flying down the road at you, ferociously eating the void at a rapid pace. That moustachioed shape is one of the design characteristics that allow you to instantly recognize the supercar screaming at you as an Aston Martin, and while it’s been adjusted up or down for various models, Aston’s grille has largely remained unchanged for modern models. Until the DBS Superleggera, and the subsequent chopped-top version, the Volante.

Here, the mouth has been opened wide, imparting a simultaneously menacing and commanding presence and a more aggressive aesthetic overall to the DBS. That new grille is hewn in a different pattern and shape, one that was rather difficult to achieve from an engineering and manufacturing standpoint. In Tarragona, Spain, we caught up with Julian Nunn, the exterior design manager for Aston Martin. At the launch of the roof-less, 340km/h super cruiser he walked us through just how the momentous change occurred. 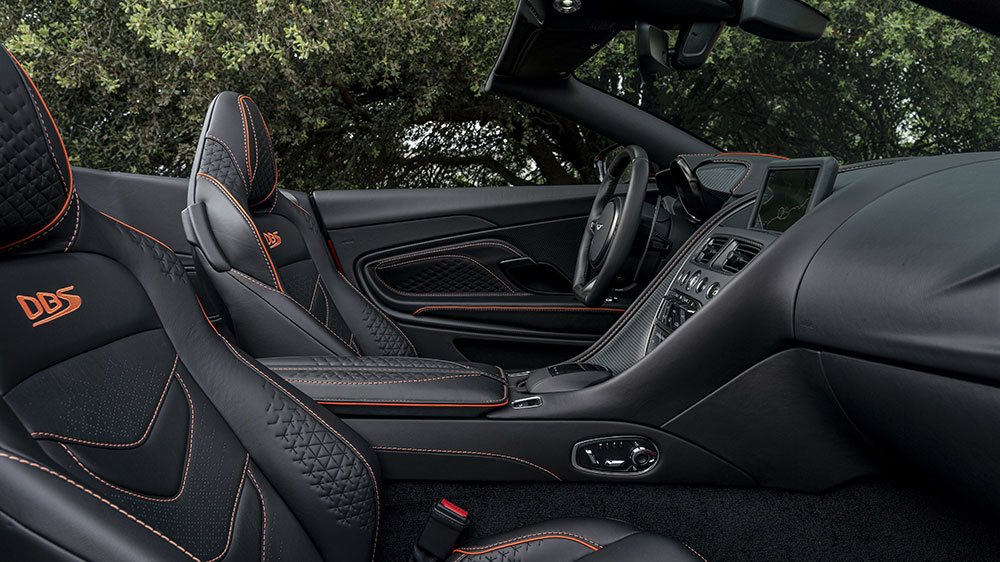 What are the design considerations factoring into the Volante from the regular DBS Superleggera?

It’s our flagship vehicle, so it needs [that] look more than everything else. When we did the coupe last year, we wanted more volume in the surface, more of the haunch, and the front, at the top of the hoodline where you get a lovely bit of pooling, which is my favorite view. We were surprised by the reaction it got even though it’s based on DB11, which has always been well received. For the Volante, obviously, the whole rear is new, from the C-pillar back.

Who established that the Volante should have giant rear haunches?

We in the design department did. We went to the engineers and asked how wide we could go. They said five millimetres; we countered with 10. We found a happy medium by showing them how it looked in clay to the width we wanted. Engineering agreed it looked cool and they said they’d figure out a way to make our width work. With a flagship, you’ve got to give the customers value for the money. I used to love the old Vantage in the Seventies. It was a British Mustang, essentially. That square back end was great, and if you look at the back end of the Volante, from the side, it’s got quite a square back end. It’s got plenty of other shapes, too, but it’s got a different character. 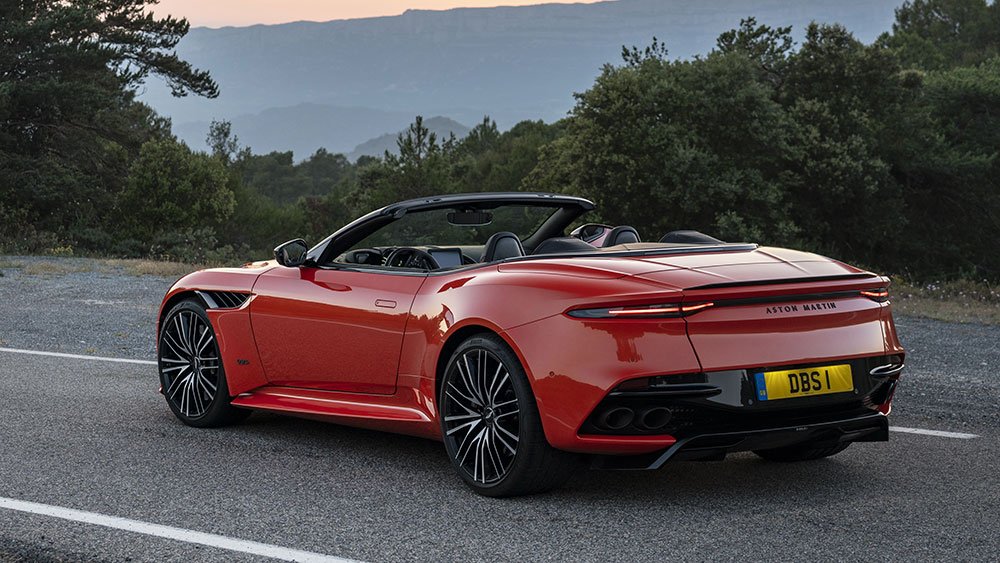 For the Volante, the whole rear is new, from the C-pillar back.

How do you decide where to put a line versus where to leave a line off? For example, there’s an extra line on the back of the rear, below the nameplate. Is that just to draw the eye to the nameplate itself?

You have to give the nameplate a place to sit. When we designed the DB11, we weren’t going to put the name on the back. It was a request from [Aston Martin CEO] Andy Palmer, which came in late in the day. Our jewellers make the badges and finish them by hand and we want to draw attention to this craftsmanship, so we need to highlight the badge by giving it a shelf. There are no wings badges on the back, which is new for this car. This is to show the premium element of this car; to elevate it above the rest. We figured if we could be controversial on the front, we can also do it in the rear.

Are you referring to the fact that it’s not a traditional Aston Martin metal grille in the front?

Yes. We’ve gone away from the conventional norms and it’s been amazing because the response has been positive. We thought we’d get crucified by the press for not doing the traditional metal bars, but it’s only been loved. It was an experiment that worked, and it’s something we’ll consider for the future. 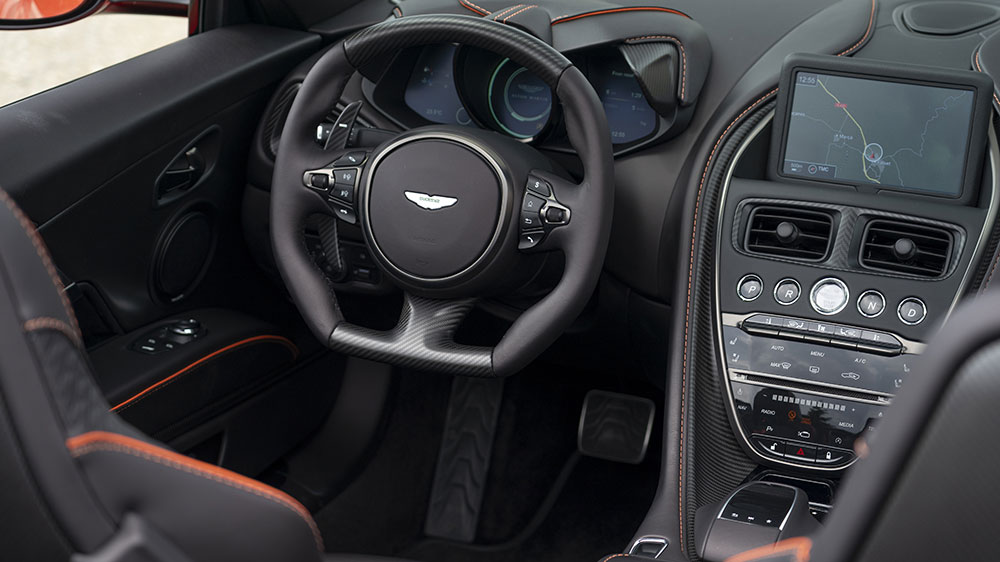 A view inside the Volante.

When you change something as iconic as the grille, how do you settle on a new design?

You’ve got the classic overall shape still, but going so deep, going all the way down to the splitter, was the evolution. On the DB11, the grille would end much higher, around where the number plate sits. Some of this is functional, for cooling, and we had to open our mesh up for the heat exchangers, too. We call this new design the hex and you can see through it when you’re crouched down low. As you stand, the 3-D design of the hex means you start to lose the ability to see through it. These 3-D elements stop you looking through to the things you don’t need to see.

How long did this process take?

It took us a year. The grille was the hardest part because this whole front end is like an old-fashioned bumper. What’s most difficult is that we’ve created a corner, a middle, and a corner and there’s only the thinnest bit of bumper to hold it all together. That thin strip is going to twist and flex, so we had to come up with a system of fitting the bumper to the grille. Then it’s put on as one whole unit. The design has to change based on the way the plastic flows into the injection mould. You can’t have the injection points in the front because it’ll look ugly when you see those points. So they have to be in the back, and you can’t have too many points because then the price goes up. We went to engineering with this idea and we worked in concert to find the best way to do this. 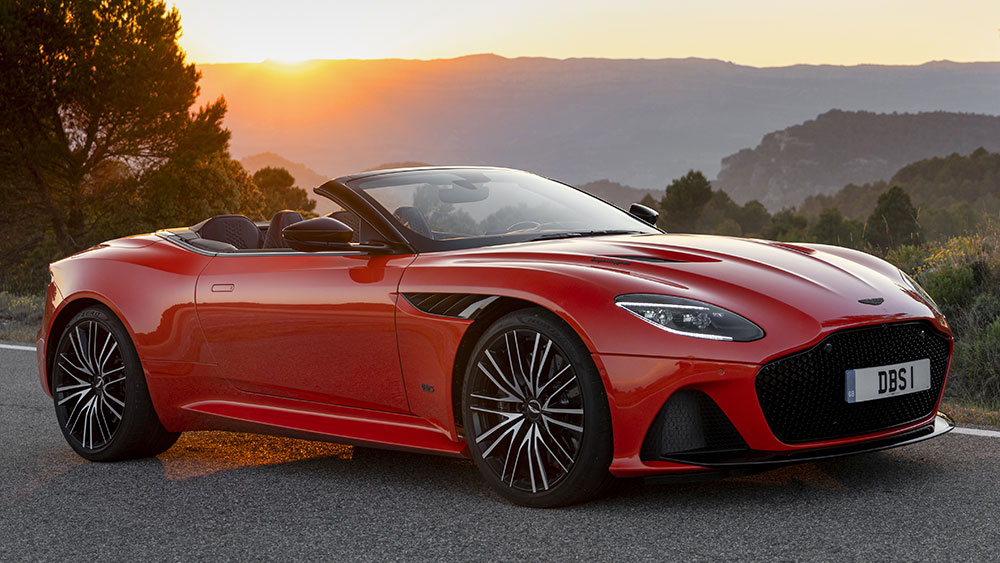 What part of the Volante’s design is functional versus purely form?

Much of it. For example, we’ve included vents behind the front wheels to suck the air out of the space. Race cars have vents up here to prevent the air pressure from building up around the wheel, keeping the car level at speed or under heavy braking. The cutout around the wheel was inspired by the Vulcan, which again helps to keep air out of the wheel arches and keeps it from stalling in there. If you don’t keep the air flowing around and out the back, the air stalls and slows the car down.

The hood strakes continue from the front to the back, even on the roof, in the DBS Coupe. You’ve included them here, too.

They do. Marek [Reichman, Aston Martin’s design director] called them the pulsating veins on a thoroughbred stallion after it’s been galloping. [Laughs] I love it.