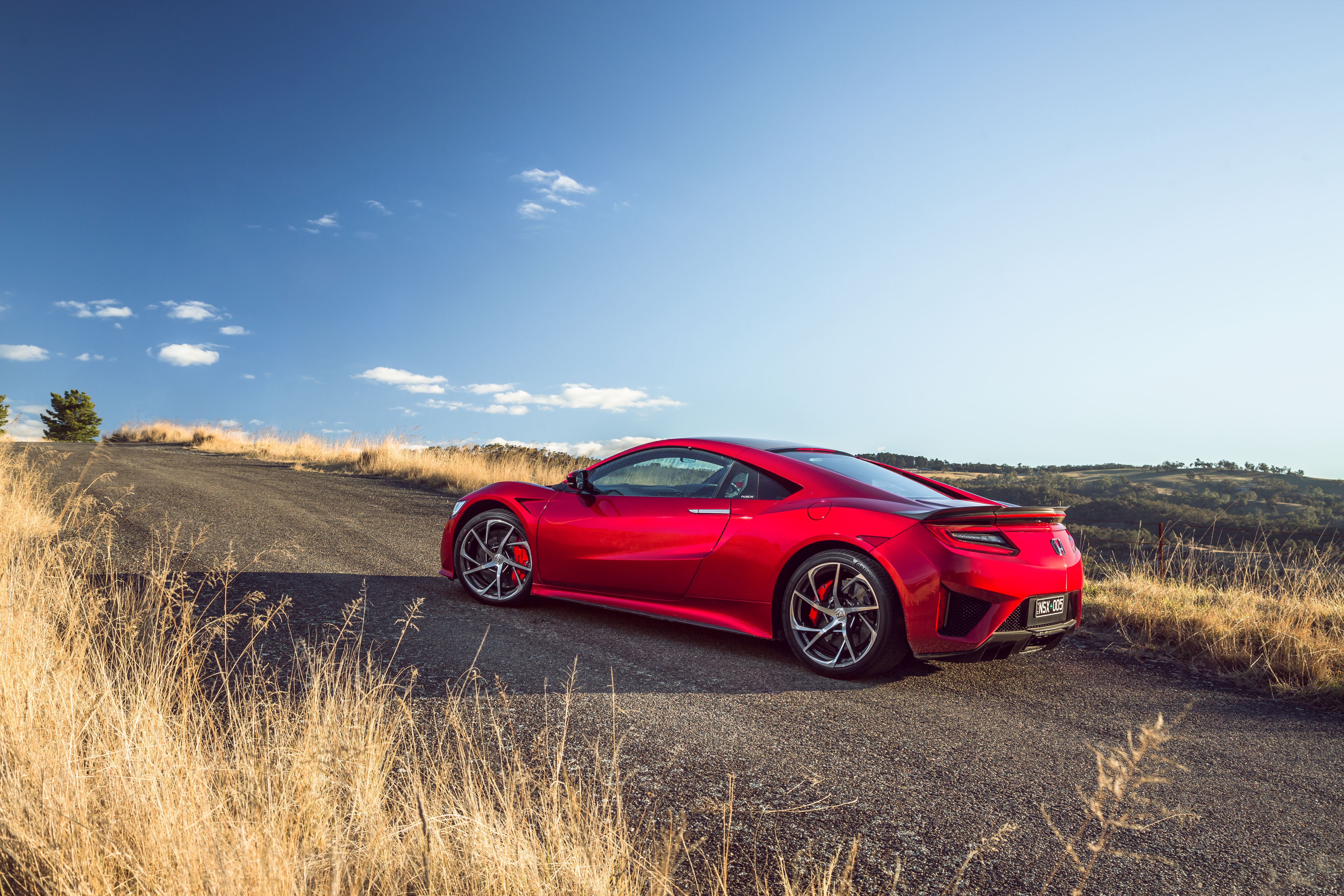 Honda’s $420,000 NSX is the bargain, breakthrough supercar that you never thought of

The second coming of Honda’s NSX is a technological tour de force.

The original NSX, Honda’s supercar of 1990, encapsulated a period when the Japanese engineering company was at the height of its innovation powers. The NSX wobbled the walls of Maranello when this Ferrari-baiting super-coupé arrived with the world’s first all-aluminium monocoque and a mid-mounted V6 engine boasting forged pistons, titanium connecting rods, and the company’s ground-breaking VTEC variable valve timing that enabled both low-end tractability and high performance at stratospheric engine speeds. Then there was the matter of a chassis with double-wishbone suspension at all corners, honed by the then McLaren-Honda F1 driver, Ayrton Senna. Indeed, the NSX’s credentials were underlined by Honda’s contemporary domination of Formula 1, where it would ultimately power Senna to three Formula 1 titles during an all-conquering spell.

For all its technical excellence, however, the original NSX didn’t fully capture the public’s imagination – many felt a V6 supercar needed at least two, or preferably six more cylinders – although the car enjoyed a 15-year production run. Honda’s belated successor to the New Sports eXperience is not as judiciously timed in its arrival. Delayed for years by the global financial crisis and indecisiveness over an appropriate powerplant, the new model was launched at a time when the Japanese brand’s renewed partnership with McLaren was the antithesis of history repeating. Yet while Honda’s high-profile failure to successfully develop a competitive V6 hybrid F1 drivetrain led to a premature split with McLaren in 2017, electrification is at the heart of the second NSX. 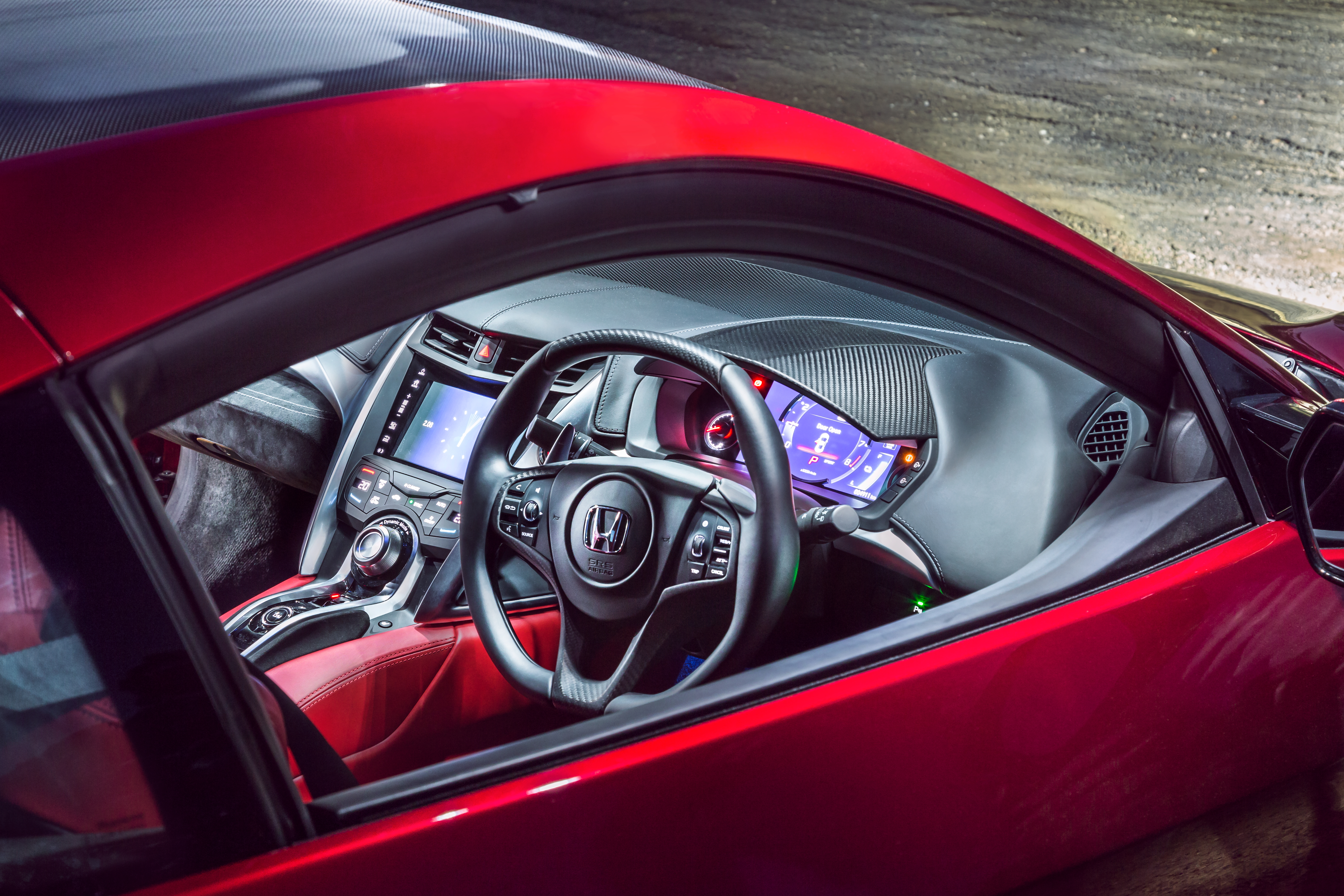 The Sport Hybrid Super Handling All-Wheel-Drive system – continuing Japan’s fascination with hyperbolic technical titles – employs a set-up that doesn’t link the front and rear axles directly.Instead, the rear wheels are fed by a rear power unit comprising twin-turbocharged V6, nine-speed dual-clutch manual and an electric motor. Meanwhile, each of the front wheels has a dedicated electric motor.That places the NSX in the comparative context of hybrid supercars such as the BMW i8 and Porsche 918 Spyder – the Honda sitting somewhere between the German duo for outputs and acceleration, but offering innovative variations. Firstly, where the Teutonic duo are plug-in hybrids, the Japanese coupe doesn’t need to be topped up with electrons as well as fossil-converted fluids, because all three of its electric motors contribute to the replenishment of the NSX’s battery pack. The front Twin Motor Unit (TMU) achieves this via regenerating braking, feeding kinetic energy to the lithium-ion batteries during deceleration. And the rear Direct Drive Motor (DDM), in addition to acting as engine starter and supplementary axle-turner, operates as a generator for recharging.Secondly, the NSX’s front electric motors transcend the traditional role of contributing only to all-wheel-drive motivation by influencing both handling and braking.

The application of all this hybrid science on the road is as impressive as it sounds on paper. Carry generous speed into a bend, and the NSX generates eyebrow-raising levels of traction and roadholding as the asymmetrical Continental ContiSport Contact tyres form their intimate chemistry with the bitumen, and the front electric motors vary the torque distribution to each of the front wheels. Unlike a limited-slip differential (of which one features at the rear), the torque vectoring can operate off throttle, and it works in conjunction with the Vehicle Stability Assist electronics that can nibble at every individual wheel’s brake discs to keep the Honda on its optimum arc. 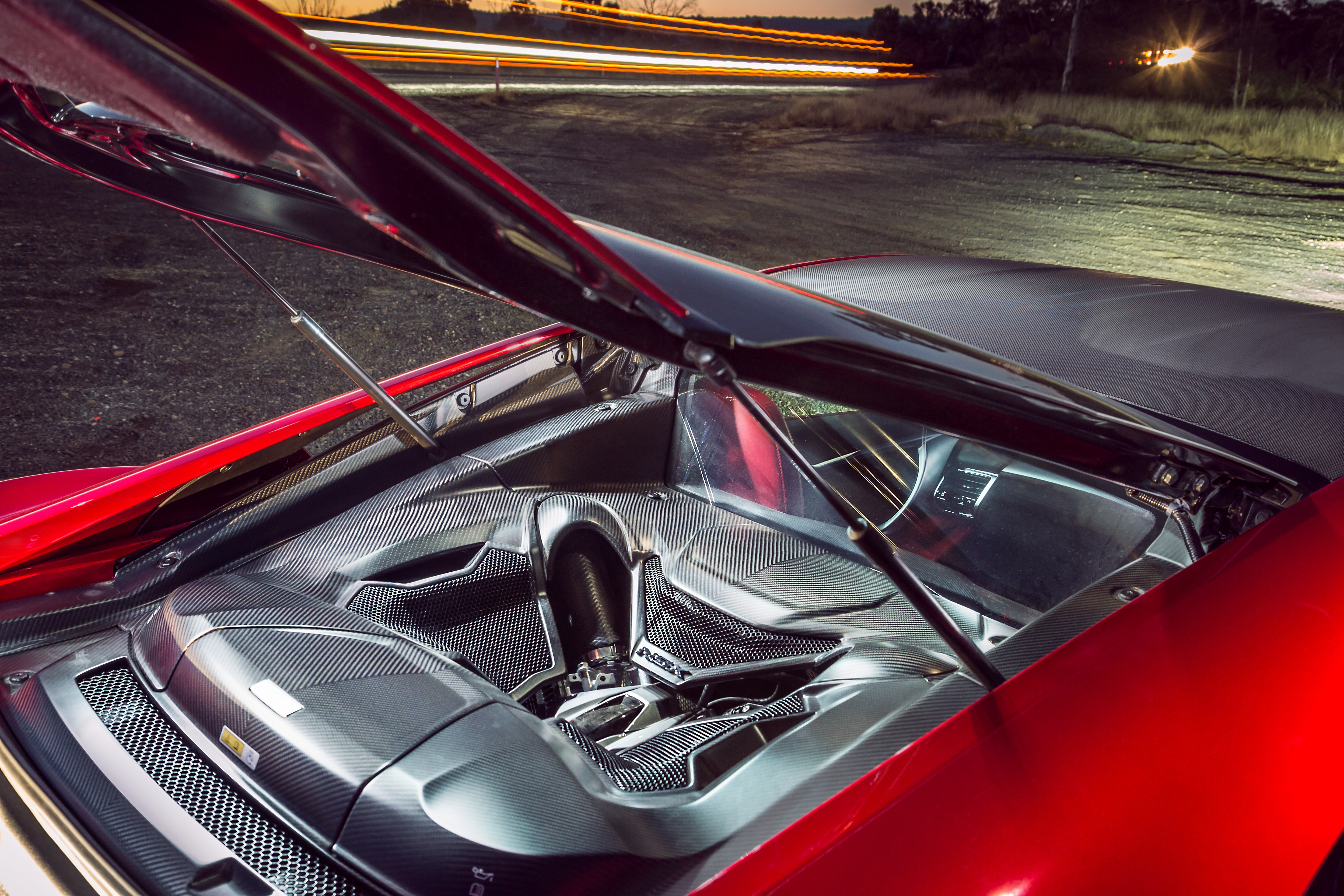 The impressively stable, utterly predictable handling would benefit from greater steering feedback, though the thick-rimmed helm is super-direct at 1.9 turns lock to lock, and unquestionably precise.Driver confidence certainly gains a notch with the large, carbon-ceramic brakes. Besides providing authoritative stopping performance, the linear modulation and pedal feel are a welcome surprise, considering the NSX employs a brake-by-wire system that dispenses with a physical link between pedal and master brake cylinder.Sport+ is the NSX’s most dynamic mode for the road – Track is designed for just that – and here the magnetorheological dampers keep the tightest of reins on body control, without a serious degradation of the compliance found with the softer suspension setting of the Quiet/Normal modes. The petrol-electric propulsion system plays an equal part in the hyper-Honda’s fluidly quick progress, comfortably overcoming a mass that approaches 1.8 tonnes despite the NSX’s advanced, multi-material construction.

Throttle response in Sport+ is exceptional without being overly reactive; step off and back onto the accelerator and the lag you would typically encounter with a turbocharged engine is delectably absent.The key to the drivetrain’s breadth of response and easily modulated power across its entire rev range is the seamlessly integrated partnership of the 3.5-litre V6 and the three electric motors.From stationary, the two motors up front are first to activate, each producing 73Nm between 0-2000rpm, with the rear electric motor fractionally behind with 147Nm delivered from 500-2000rpm.

They keep things ticking along while the V6’s two turbos spool up before helping to deliver the combustion engine’s maximum torque of 550Nm between 2000 and 6000rpm. Regardless of mode, the nine-speed dual-clutch manual is one of the finest in the business: smooth and intuitive if left to its own devices; ultra-responsive if the driver selects gears via the paddle levers.Even with overhead microphones, audio speakers and pipes behind the seats helping to magnify the V6’s sound in Sport or Sport+ modes, the NSX note rarely ventures beyond what you might call purposeful. It can sound aggressive, though this Honda isn’t the most evocative-sounding mid-engined exotic. Opt for a contrary driving experience, and Quiet mode provides temporary electric-only momentum. While not capable of the range or speeds of BMW’s i8, it is a step beyond Honda’s long-running IMA (Integrated Motor Assist) mild-hybrid tech that merely supplemented the combustion engine and never powered the wheels solely.An official fuel consumption figure of 9.7 litres per 100km is more than quadruple the BMW i8’s thirst, however, and the NSX’s range seems rather limited. At one point, the Honda’s computer indicated a range of only 211km available despite a tank being three-quarters full. 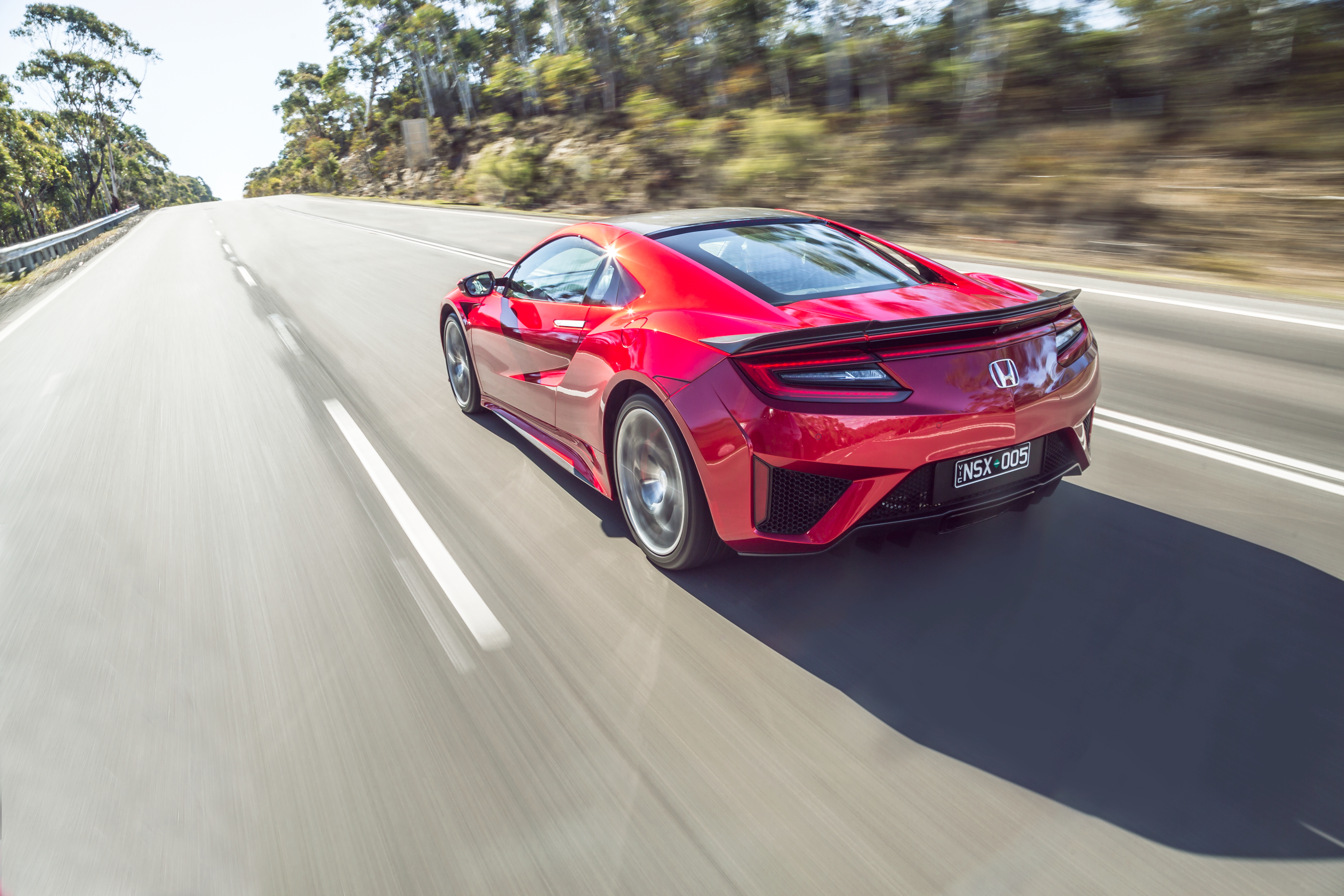 Generic Honda plastics also conspire to limit the NSX cabin’s specialness compared with rivals. Yet there is visual and tactile appeal through various textures including Alcantara and leather, flowing dash lines, sculpted sports seats and a futuristically slimline centre console appropriately dominated by the large Dynamic Mode dial. The ultra-low driving position is superb, and outward vision is surprisingly excellent – one of the few aspects to link NSX models new and old.

Now even the price tag can be described as relatively affordable, as with the original (which hovered between Porsche 911 and Ferrari V8 pricing). That the NSX is set to be one of the rarest supercars in Australia, however, can be viewed as an ownership bonus. For automotive aficionados, the technological marvels of the NSX suggest that, after too many years on the periphery of pioneering progress, Honda has returned to the cutting edge.