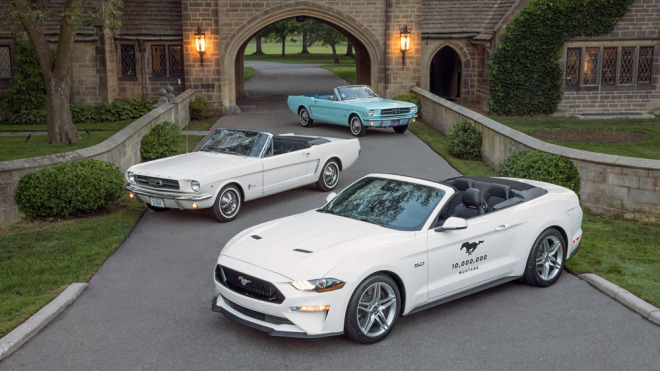 To commemorate the model’s milestone, the very first owner of the now-classic car was celebrated at the proceedings.

On a sun-splashed day in the middle of August, Ford opened the gates to the Edsel & Eleanor Ford House on the shores of Lake St. Clair, about 25 kilometres northeast of downtown Detroit, and brought together a trio of noteworthy vehicles to celebrate the recent production of the 10 millionth Mustang. That milestone Ford pony — a convertible painted Wimbledon White, the same colour as the first Mustang built in 1964 — sat parked alongside a 1965 Mustang convertible, providing irrefutable evidence that Ford’s current team of designers and engineers preserved the model’s classic lines and curves.

“When you see the scoops and scallops, you realize that they drew greatly from the design cues of the first Mustang,” said Ted Ryan, Ford’s archives and heritage brand manager. “The team that designed the [original] car knew they were onto something,” Ryan added, acknowledging that the era’s romanticism of the P51 Mustang fighter plane — combined with the knowledge that mustangs were small, wild horses — inspired the Ford design team to brand the new model with the moniker. “That’s what Ford’s Mustang lets you do. It was a promise that you could roam free.” 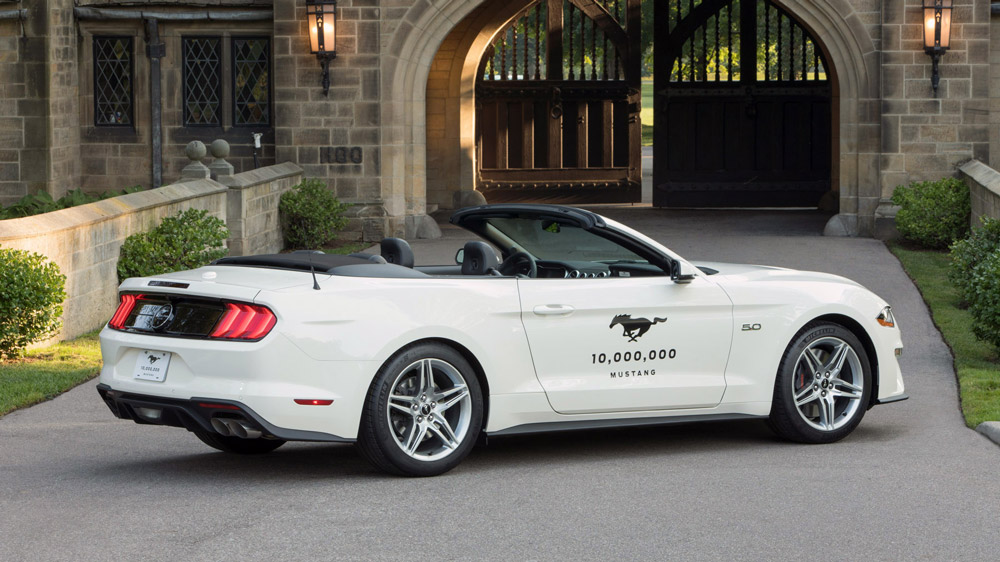 The 10 millionth example of the model. Photo: Courtesy of Ford Motor Company.

Appearances aside, the two cars are far less comparable under the bonnet. While the 1964 example featured a 122kW V8 engine and a three-speed automatic transmission, the 2019 Mustang is equipped with a 10-speed automatic transmission, backed by a 5.0-litre V8 that churns out 358kW. One thing in common is the affordable pricing, which can be traced back to the origins of the Ford Motor Company.

“Henry Ford would have loved the fact that this was an entry-level car,” Ryan said while sitting behind the wheel of the 1965 example. “He wanted everybody to have a car. In mastering the means of production with the assembly line, he was able to drive cost out of the car. Ford sold more than 400,000 Mustangs in the first year and more than one million in the first two years. Everybody was getting in one because they could get in.”

The very first person to buy a Mustang, Gail Wise, was also a celebrated guest at the Edsel & Eleanor Ford House in August, along with her husband, Tom. The 1965 Mustang convertible that she bought on April 15, 1964 (and still owns) completed the trio of standout vehicles on show, and the Wises’ story encapsulates the love affair that the iconic American automobile has inspired in countless car enthusiasts over the years.

As Wise remembers it, she had just graduated from Chicago Teachers College (now Chicago State University) and she needed a car that could take her to a teaching job out in the suburbs. Stopping in at the Johnson Ford dealership in Chicago, she was looking only for a convertible, but there were none on the showroom floor. Although he wasn’t supposed to, the dealer brought her to the back of the shop and — removing a tarp — introduced her to Ford’s new Mustang, a sleek, sporty convertible painted sky blue. 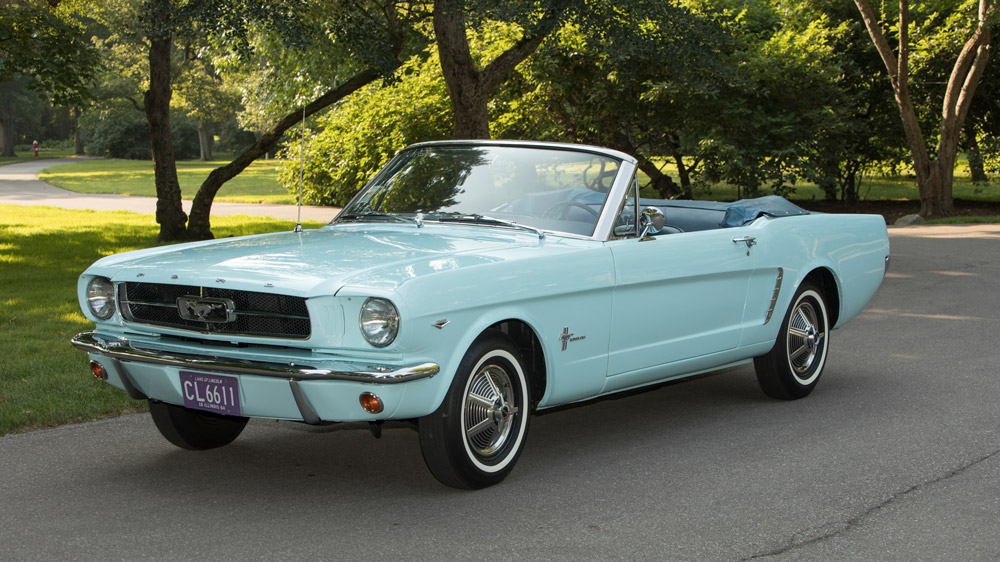 Although Gail’s favorite colour was red, she says the car’s appearance with its bucket seats and the intoxicating sound of its engine revving swayed her. “He says you can’t love an inanimate thing,” Gail says with a laugh, pointing to her husband. “But I just fell in love with the car.”

She bought the Mustang on the spot — two days before dealerships were allowed to sell them and before the car was even unveiled at the World’s Fair in New York City.

“When I first bought the car and drove it out of the showroom, everybody was waving at me and giving me high fives and asking me to slow down so they could see this car,” Gail recalls. “I only had three miles to drive home, but I was wishing that I had 20. It was fun. I felt like a movie star. I know it wasn’t me; it was the car. But it was amazing.”

Tom and Gail married in 1966, and they drove the ’65 Mustang regularly for the next 13 years. When a mechanical issue rendered the car inoperable in 1979, Tom pushed the Mustang into their garage and vowed to fix it. For almost three decades, life interfered with those plans, but Tom never gave up on the idea. “There were times when I couldn’t even see the car,” he says. “It was buried under bicycles, two-by-fours and lawn chairs. It just sat there.” 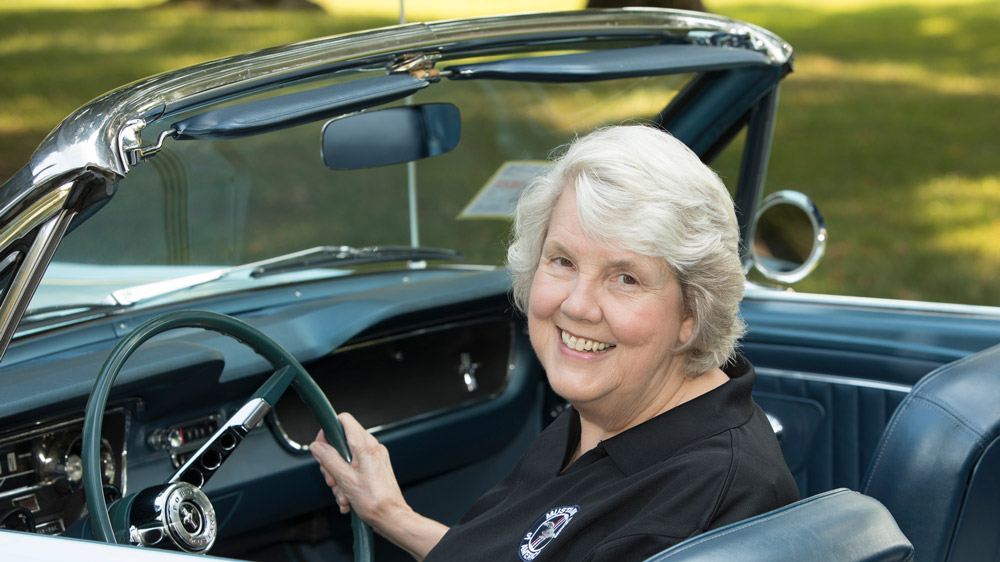 A little more than 10 years ago, after Tom finally completed a restoration of the car (doing most of the mechanical work himself), he and Gail discovered that their classic Ford was the first documented Mustang ever sold. Despite that notoriety and the press coverage that followed, they haven’t received any rich or tempting sales proposals. At least, not yet.

“We’re waiting for that,” Tom says with a laugh, “something we can’t refuse.”

Back in 1964, when Gail was 22 years old, a sky-blue Mustang — tucked away in the backroom of a Chicago Ford dealership — had been exactly that.