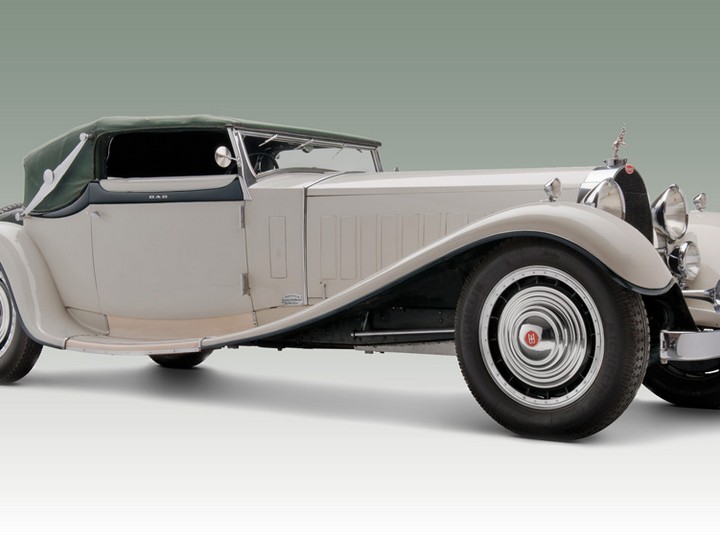 Five gifts for the car connoisseur

Each of these five automotive offerings will delight any devotee of driving.

Since the first pairing of motor to wheel, the automobile has captivated the imagination as a symbol of freedom; a passport to adventure accompanied by ever-increasing power and performance. And while social media and virtual reality seem to be the vehicles of choice for many of the younger generation, car culture remains rich among the more mature and well-heeled.

Whether it’s the opportunity to own continuations of three classic Shelby racers, a fully customised Rolls-Royce Phantom VIII, or a futuristic flying car, each of these five automotive offerings will delight any devotee of driving. When Enzo Ferrari developed his first automobile, he commissioned the Connollys to create the upholstery because the British family was firmly established as the world’s best source for bespoke leather car upholstery. That tradition has been upheld by fourth generation Jonathan Connolly, who continues to work with Ferrari on bespoke commissions and this year is making the upholstery for the marque’s 70th-anniversary limited-series car. For this model, he says, Ferrari requested leather used in a 1950s automobile.

Connolly’s unique interiors have graced the seats of classic Jaguar, Rolls-Royce, and Aston Martin models and are often commissioned for new editions like the Jaguar E-Type. “Our clients prefer the feel and aroma of bespoke hand-tanned leather,” says Jonathan, who manages the company’s leather-finishing workshop outside London. Established in 1878 for the making of leather carriage seats, Connolly grew with the automotive industry and is esteemed in the classic-car collector community. Its customers run the gamut, from one refurbishing a 1950s Aston Martin DB and seeking the original leather to a new Rolls-Royce owner who desires a customised interior. It has perhaps the world’s most extensive archives of original leather swatches to identify upholstery from the top marques’ models, dating back to the beginning of the motoring industry.

Today, Connolly is under the careful stewardship of Isabel Ettedgui, who has owned the brand for 20 years and last year opened a Connolly townhouse in London’s Mayfair district that presents a growing selection of products, including ready-to-wear items, car coats, and home accessories. “People are attached to this brand,” she says. “Some have known it for generations, and they love the heritage.”

Ettedgui wants to share the Connolly world with the recipient of this gift, who will meet with Jonathan Connolly to collaborate on bespoke leather upholstery, selecting the specific type of leather and colour for his or her new or vintage automobile. “If you have a classic car,” Connolly says, “we could re-create the original leather upholstery for that model or make a new version from a range of colours and grains, or develop your own custom colour.” After the tête-à-tête, the recipient will visit the firm’s London townhouse to commission a three-piece set of luggage that can be made in the same leather as the car upholstery and designed to fit snugly in the automobile’s trunk. The gift will be completed with customised driving accessories, and the recipient will be ready to hit the road in authentic style. In the mid-1960s, Carroll Shelby’s competition division, Shelby Racing, created three of the most significant Ford-powered race cars in history. Few were made, and none saw their full potential realised as Shelby shifted focus to Ford’s red-hot GT40 racing program. Now, Carroll Shelby International has authorised three builders to continue production of the originals (offered here as a package), with each bearing the final serial number among the original assigned VINs.

The Shelby 427 Competition Cobra race car was developed in 1964 for FIA series racing, with 100 examples planned and about 68 made. Thirty-two new examples, priced at US$500,000 ($A657,000), will be manufactured by DenBeste Motorsports and bear VINs from the remaining 32 assigned to the CSX 3000 series. The hand-rolled aluminum body will sit on original-style frame rails with an aluminum side-oiler 7-litre V8 built by the Carroll Shelby Engine Company.

The Ferrari-conquering Shelby Daytona Coupe is legendary, with only six built from 1964 to 1965 and each powered by a 4.7-litre V8 engine. Yet Shelby flirted with a secret weapon, fitting the CSX 2286 with a 7-litre big block before finally refitting it with a 4.7. Shelby will build six examples of the 427 Daytona Coupe in bare aluminum (the buyer of this gift can also have it painted) — showing off the brilliance of the original design — powered by 600 hp, aluminum, 7-litre V8 engines from the Carroll Shelby Engine Company. Priced at US$500,000 ($A657,000), each will bear a CSX 2600-series VIN.

Perhaps the most famous Shelby was the 1965 Shelby GT350. About 562 were made, and of these, 36 “R” models were constructed for racing. During development, a 17-year-old shop mechanic named Jim Marietta fitted one example with an experimental independent rear suspension (IRS) to evaluate handling improvements. Unfortunately, that IRS never made it onto subsequent models. In 2014, three members of the initial Shelby Racing team — Pete Brock, Ted Sutton, and Marietta — founded the Original Venice Crew to build 36 authorised continuation GT350R models, each with the “IRS that never was.” Beginning with an authentic 1965 Mustang body and powered by a 4.7-litre (or optional 5.4- or 5.9-litre) V8 engine from the Carroll Shelby Engine Company, each car is fabricated by original team members and their assistants working out of Carroll Shelby International’s headquarters in Los Angeles. Bearing VINs OVC/SFM 001 through 036, the last VIN is priced at US$300,000 ($A395,000) and is assigned to our unrepeatable Ultimate Gift offering. About a decade ago, aviation enthusiast Sam Bousfield, an architect turned inventor based in Oregon, asked himself, “What does aviation really need?” His answer, ultimately, was the Switchblade — the three-wheeled, carbon-fibre flying car that his company, Samson Motors, is developing.

On the road, the Switchblade will achieve 35 miles per gallon of regular unleaded automobile gasoline and will burn only nine gallons per hour when flying. At 5.15 metres long, it is slightly longer than a Honda Accord. Plus, it’s only about 1.8 metre wide, so it will fit in your home’s garage. Samson is offering the base-model Switchblade (including the company’s builder-assist program) as an experimental aircraft, along with a bespoke Limited Edition model (starting at US$500,000 ($A657,000)). Each LE will have a custom interior and include unique exterior features.

The Switchblade’s name comes from its wings, which swing out from the belly of the vehicle like the blade of a pocketknife. When the vehicle is in driving mode, they disappear into the body so they are protected from fender benders. The transition from automobile to aircraft is automated and will take about 45 seconds. The vehicle will be classified by the U.S. Department of Transportation as a motorcycle, but Bousfield likes to call it a flying sports car because of its street-mode capabilities: zero to 96 km/h in 6.5 seconds and a top speed of more than 200 km/h. In the air, it will cruise at 258 km/h and reach a top speed of 290 km/h. There are few material manifestations of success, prominence, and power more potent than a Rolls-Royce automobile. After all, it wasn’t long after 26-year-old car dealer Charles Rolls met 42-year-old engineer Henry Royce, in 1904, that their collaboration resulted in what would become the ride of royalty.

One car configuration, which debuted in 1925, has been the flagship of the British marque’s rarefied field and maintains the longest-running model name in automotive history — the Phantom. In its 92-year existence, the Phantom has been revised only eight times, with the latest version revealed this past July.

To help commemorate the new Phantom VIII, Rolls-Royce is offering one reader the opportunity to gift true automotive art with the Robb Report Rolls-Royce Spirit of Ecstasy Experience. Along with ownership of a new, customised Phantom VIII, the package features first-class, round-trip air travel for two to London and 2 nights’ accommodation in one of the city’s most exclusive hotels.

A day will be spent visiting the Rolls-Royce headquarters in Goodwood for a consultation at the company’s Bespoke Atelier to ensure that the car is tailored to the recipient’s taste — including the option of commissioned art for its innovative dashboard gallery. Also on the menu is lunch with Rolls-Royce’s head of design, Giles Taylor, and a private dinner with CEO Torsten Müller-Ötvös (below, left). As far as delivery of the one-of-a-kind car, well, that’s the dessert.

## Day at the Museum You and five of your friends are the only visitors for a day at two of the United States’ leading cultural destinations: the Henry Ford Museum of American Innovation and historic Greenfield Village in Dearborn, Mich. Your day begins with a personal tour of a 26-million artifact archive collection with Marc Greuther, one of the nation’s foremost historians and the chief curator at the Henry Ford. After the tour, you’ll be swept away in an authentic Model T to finish your curated immersion with a private tour of Thomas Edison’s Menlo Park Laboratory in Greenfield Village.

Then, a Henry Ford 1931 Bugatti Type 41 Royale — one of only six examples, and one of the world’s most valuable automobiles — is yours to drive through the streets of Greenfield Village. The village (and museum) will be closed to the public, so you and your guests can leisurely visit each of its 83 historic structures, including the Wright Brothers’ home and cycle shop and Henry Ford’s birthplace. For lunch, a rare farmhouse feast at the Firestone Farm will take place in the same 1880s dining room where tire magnate Harvey Firestone dined with Ford and Edison.

Your afternoon features a private tour of the Henry Ford with president and CEO Patricia Mooradian and executive vice president and chief historian Christian Overland. You and your guests can roam the 12-acre museum and see national treasures like the Rosa Parks Bus and the chair in which Abraham Lincoln was sitting the night he was assassinated.

The gift also includes hotel accommodations at the Dearborn Inn, adjacent to the museum’s campus.