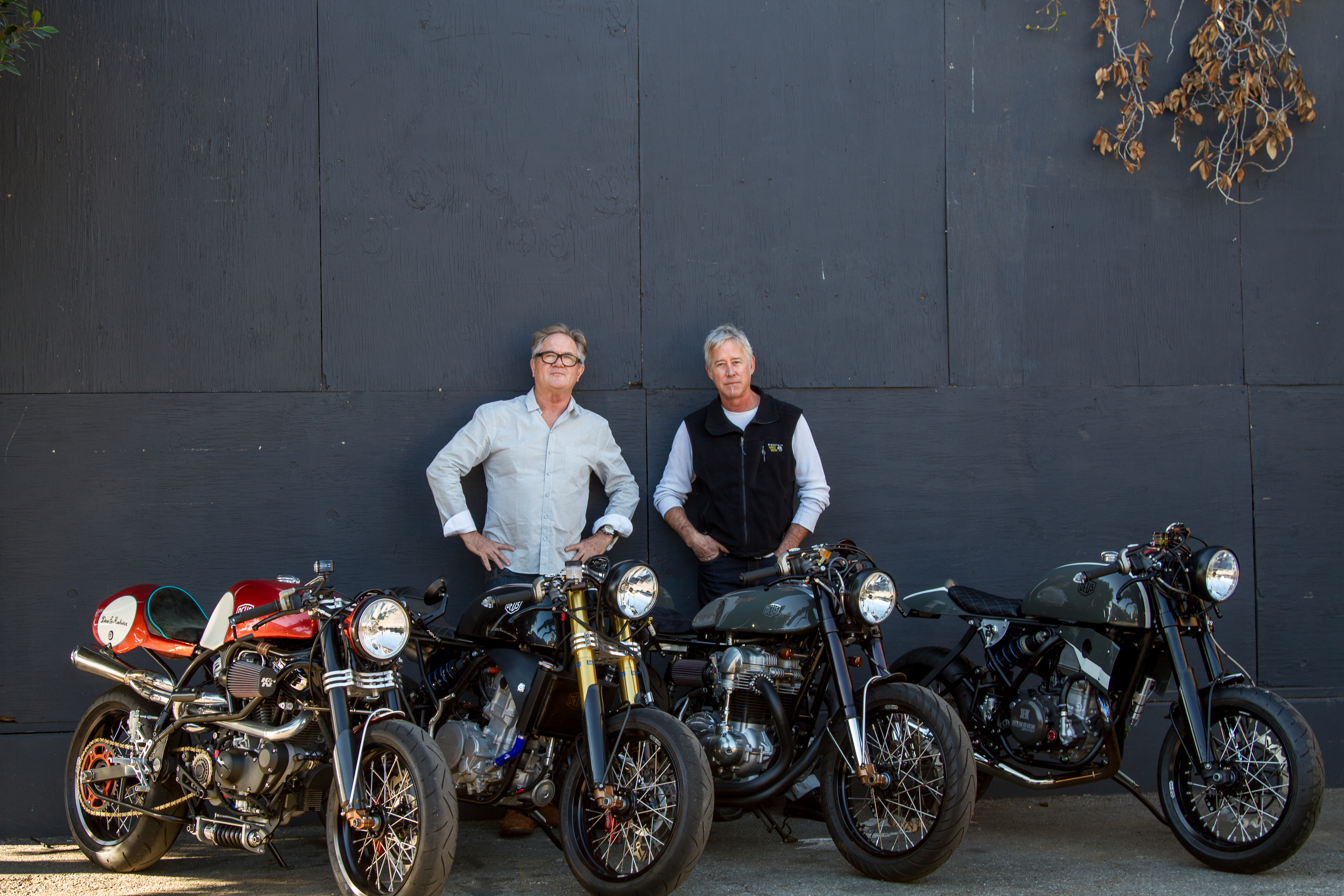 On a fine Spring day in 2014, Dare Jennings strolled into the plush headquarters of luxury giant LVMH in Paris’ Avenue Montaigne. It was a long way, not just literally, from the Australian entrepreneur’s usual environment among the modified motorcycles, racks of clothing and laid-back café at Deus ex Machina, the business he founded in Sydney’s inner-west in 2006 – six years after the $25 million sale of his cult surfwear brand, Mambo.

Jennings was in Paris to meet with LVMH group managing director, Antonio Belloni. “He’s probably one of the most powerful men in fashion in the world,” chuckles Jennings who, at 67, has lost nothing of his boyish enthusiasm and air of wonderment. “It’s kind of, there’s Tony, ‘yeah, come in.’ And in the next office is [LVMH CEO] Monsieur Arnault, the fifth richest man in the world …”

What did they talk about? Motorcycles, naturally. And surfing. And bicycles, and clothing and film-making and, well, pretty much anything else that, somehow, fits under the umbrella of Deus ex Machina – which, far more than just a brand, is being hailed as a revolution in retailing. Deus and its ‘cultural temples’ have expanded well beyond the original Sydney ‘House of Simple Pleasures’ to establish footholds in Los Angeles, Tokyo, Milan and Bali.

In defiance of conventional brand wisdom, each of these flagship stores manages to subsume the local culture and interests, while remaining distinctly Deus. “We’re sitting there talking to [Belloni] and he knew exactly what the point of it was, what the quality of it was,” Jennings says. “A lot of people haven’t the faintest idea what you’re doing, but he was so perceptive about what we were trying to do and what was good about it.” Indeed, Belloni was willing to back it with his own money. June 2017, Jennings sold 60 per cent of Deus to a small consortium of mainly Italian businessmen. Linked primarily through friendship, and almost all originally from the same town (Gallarate, near Milan’s Malpensa airport), the gang also includes Ottavio Missoni (grandson of the eponymous brand founder) and one of the Bramani family, owners of the Vibram shoe sole business.All were effectively united under Federico Minoli, whose CV includes top-level stints at Bally, Benetton USA, Bain & Co and Investcorp. Minoli and motorcycling had come together with the 1996 takeover of the then-ailing Ducati by turnaround titan David Bonderman’s TPG Capital.

Minoli orchestrated the storied Italian motorcycle brand’s remarkable revival.In 2013 Minoli, in league with his cousin Filippo Bassoli, opened the fashionable Deus ex Machina store in Milan under a licence arrangement. [Deus’ properties in Australia, Los Angeles and Bali are wholly owned; Milan and Tokyo are licensed.] It was the early fruit of Jennings’ growing quest for capital to grow the business and relieve some of the personal pressure.“I always say this business was like the anecdote of the guy in a field who sees a weather balloon that starts to become untethered, and he runs over to grab onto it. It takes him up until he realises he’s too high to let go – and there’s nobody to come and save him. He doesn’t know where it’s going to go, but he just has to keep hanging on …“I committed to it and I just had to go with it.

It was getting all the accolades and everything, but it was like a tech start-up; it was just burning money to begin with. But the signs were good and I knew that in the end, apparel is a business that I know, it’s got margin and you can go around the world and you can make this and sell it to 50 countries.”A merchant banker friend had suggested Jennings visit Bonderman in New York. “I remember walking into his building because there were all these models of airliners and I thought, ‘He must be an enthusiastic collector of model aeroplanes.’ Actually, he’s an enthusiastic collector of airlines …”

Bonderman recommended Jennings call Minoli, by then no longer at Ducati. “Federico goes, ‘Dare, I’m glad you called. We’ve been talking about you. We’re coming to see you.’ And if someone says, ‘I’m coming to see you’ – that’s usually serious.”Four years on from the Milan store opening, Minoli has replaced Jennings as CEO of Deus ex Machina worldwide. According to a recent article in The Australian Financial Review, the company’s five-year plan is to grow beyond $100 million annually – it’s currently about $30 million, matching Mambo at its peak – with expansion into the US, Europe, Asia and South Africa to be achieved either through direct investment or licences.The timing is just right for Jennings, who still holds 30 per cent equity “and a fair bit of cash” and now goes (a little uncomfortably) by the title of President. “I just want to enjoy it. It’s part of being surprised that I’m nearly 70 and, ‘Oh, how did that happen?’”He celebrated the deal by buying a used Range Rover. And a van.

At 67, he still usually rides a motorcycle to work – he owns half a dozen – though his surfing has fallen off somewhat since the recent passing of a long-time surfing buddy. He keeps homes in Sydney’s Tamarama and Canggu, Bali, and concedes that his only indulgence is travel. Even then, he says, his restlessness means he most enjoys going places where he has a reason to be.“My wife loves to go somewhere, go to a resort and just hang around. I can’t do that. I like to go to places where I meet people, where there are things to learn.”The farmer’s son from Griffith, NSW, dropped out of Sydney University and started screen-printing T-shirts, which grew to a sizeable (if soulless) rag trade enterprise. With successful detours into a record shop and spin-off recording label Phantom Records, Jennings’ eclectic interests all collided in the 1984 founding of Mambo. Mambo’s colourful cartoon graphics and irreverent humour defined much of the Australian aesthetic through the ’90s. 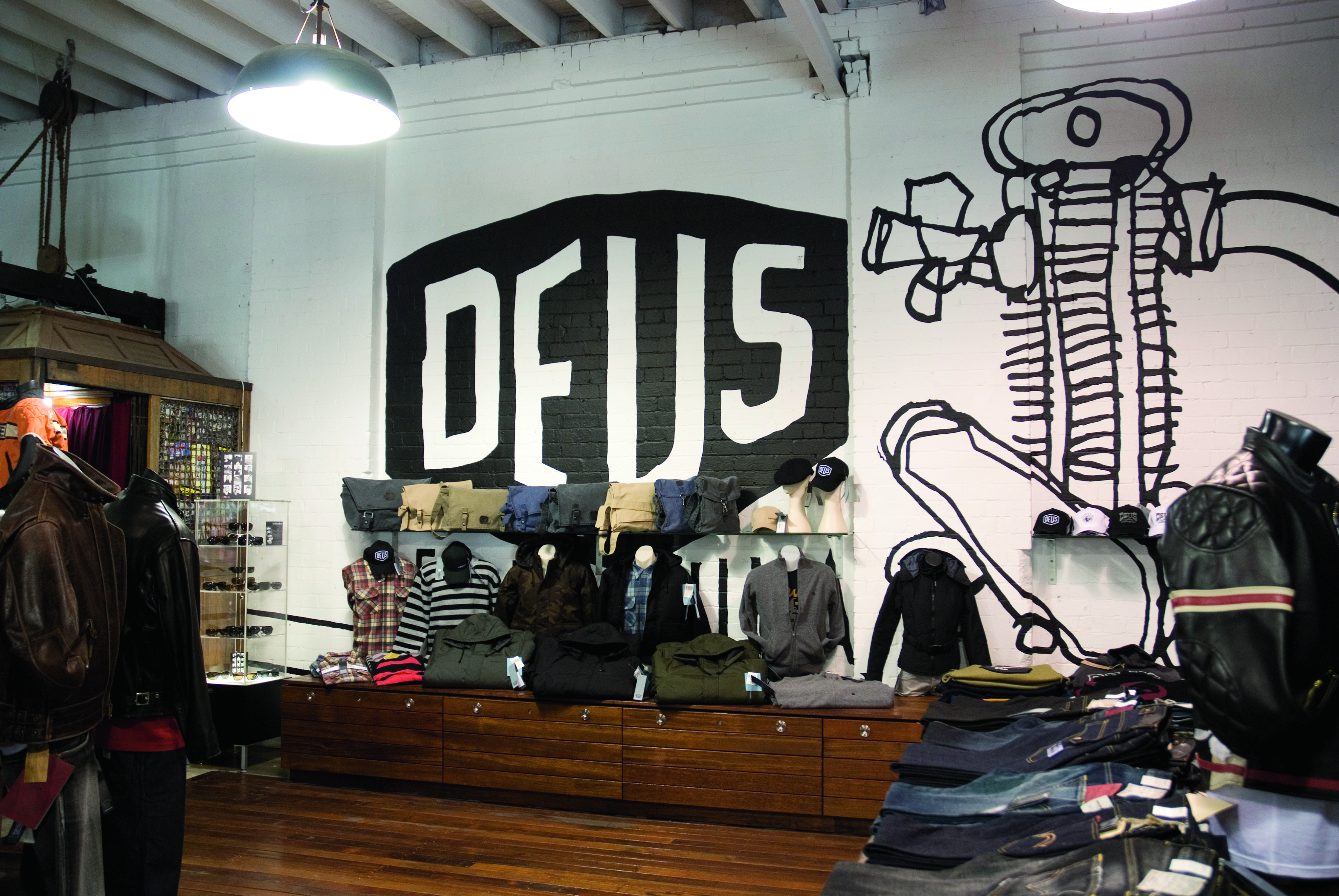 It reached perhaps its zenith in being showcased at the 2000 Sydney Olympic Games; which for Jennings, coincided with his 50th birthday, his marriage to wife Maliwan and, imminently, the arrival of his two children (son Harry and daughter Yathima).“I sold it all, 100 per cent,” he says. “You know, ‘Here’s the keys. Figure it out.’ Well, I had to stick around for a bit.”The inspiration for the Deus ex Machina business (the name refers to a theatrical plot device) originated on a trip to Tokyo, where Jennings noticed that young motorcyclists were reducing basic commuter models to the stripped-down style of 1950s ‘café racers’. A lynchpin was the Yamaha SR-series, mechanically simple and essentially unchanged since 1978. Most were works in progress.“The thing that appealed to me the most was that it was contemporary. And, you know, I was in my 50s, shit-scared of growing old … I have this fear of nostalgia – it smells like death. And what I liked was that this was a contemporary activity, even though the references were vintage. It was being done in a fresh and original way.“It was also at a point where technology had kicked up, but here was a simplicity that was being embraced. A young guy could get a motorcycle and it was all do-able.

“The thing is, it’s an art form. That’s absolutely critical in motorcycle terms. People don’t talk about that. The fact is, the driving force is art.”

Where Mambo had bestowed a kind of surf-culture cool on anyone who wore one of its T-shirts, the Deus brand embraces a mindset of authentically getting one’s hands dirty, learning about a new thing and sharing the experience. At Deus Los Angeles, it’s as much about classic Porsches as motorcycles. At Deus Bali, it’s more about surfing. Deus Milan has bicycles conspicuous in the mix.But the point is, someone could ride into any of them on a ’60s Schwinn Sting-Ray bicycle salvaged from the dump. And that, too, is very Deus.Bucking all conventional marketing wisdom, Deus doesn’t even have a consistent logo, such is the genius of the brand’s quietly spoken co-founder and creative director, Carby Tuckwell. His woodcut-style drawings of not only Deus’ own products, but any classic models that take his fancy, speak of a sincerity of lifestyle, rather than the object itself.

Deus logos often mimic the graphic language of 1950s-’70s motorsports brands.It’s that overarching appeal – the selling of an experience, not just a product – that has Deus poised for a supercharged future.“Deus is an idea and motorcycles are one particular manifestation of that idea,” Jennings says. “We make motorcycles, but that’s not who we are. I’m not being facetious, but if we wanted to get into floral arrangements, we could do that as well. If we wanted to. In marketing terms, you have to challenge preconceived ideas about what you’re doing. Because people go, ‘Oh, you’re one of those, okay,’ and then forget about it.

“But when they go, ‘What the hell? What are those knuckleheads up to now?’ People will come back to be annoyed. It’s a strange psychology.”