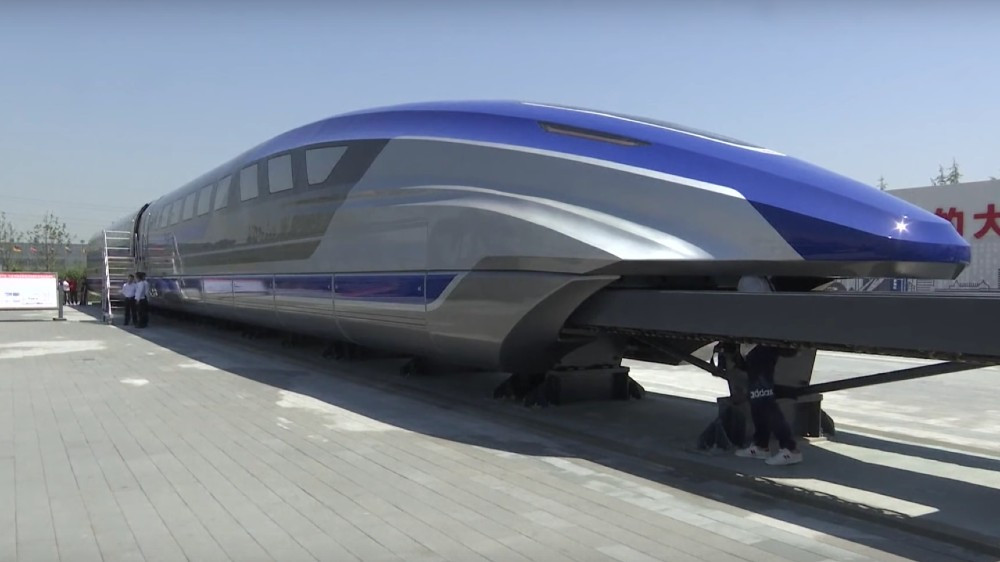 China Railway Rolling Stock Corporation hopes to have its new maglev train in operation by 2021.

Taking the train through China is about to get a lot more interesting—and about 160km/h faster.

Late last week in Shandong province, state-owned rail company China Railway Rolling Stock Corporation (CRRC) unveiled the body prototype for its new high-speed magnetic-levitation (maglev) train, which it claims will reach an astonishing top speed of 600km/h. With a promised launch date of 2021, the company hopes the new trains will bridge the gap between high-speed rail and air transportation, revolutionizing how people travel throughout China in the process.

It will complete some trips faster than a plane.
No, it’s still not as fast as a plane, but the maglev train will be the world’s fastest when it launches—for a while at least. (Most current high-speed trains operating between 320 and 440 kilometres per hour.) When factoring in prep time, CRRC claims the maglev train will complete some trips within China even faster than its airborne counterparts. “Take Beijing to Shanghai as an example—counting preparation time for the journey, it takes about 4.5 hours by plane, about 5.5 hours by high-speed rail, and [would only take] about 3.5 hours with [the new] high-speed maglev,” CRRC deputy chief engineer Ding Sansan said in a statement.

It literally floats on air.
You wanted a hovercraft, you got one. The new train is able to travel so fast because of its design. It uses magnetic repulsion to levitate less than two inches off the rails and propel itself forward, reports UPI. This means that rather than having its wheels in constant contact with the track, it rides along on a cushion of air.

It was relatively short three years in the making.
First announced in 2015, CRRC’s train is the result of a three-year collaboration between the Chinese government, research institutes, universities and 30 businesses. According to Ding, the lightweight and high-strength train body will allow CRRC to test out five different prototypes before committing to a final design.

There’s still a lot of work to do.
Of course, there’s a lot that needs to be done before passengers are able to zoom around China at 600 kilometres per hour. Those kinds of speeds require an exacting level of stability and precision to maintain a smooth ride. At the unveiling, the company announced that later this year, its subsidiary in Qingdao will open a high-speed maglev trial production centre so that the train can be tested extensively before going into production.

The race for the world’s fastest train has just begun.
CRRC’s train isn’t the only next-gen maglev train currently in development, according to The Verge. Japan is currently building a 505-kilometre-per-hour maglev line between Tokyo and Nagoya that it hopes to have in operation by 2027. The country previously set a record, in 2015, when one of its maglev trains hit a top speed of 603-kilometres-per hour. When that train officially debuts to the public in 2027, it will become the new world’s fastest train.

Check out a video of China’s prototype maglev train below:
Embedded content: https://youtu.be/cuc03kxeHQs