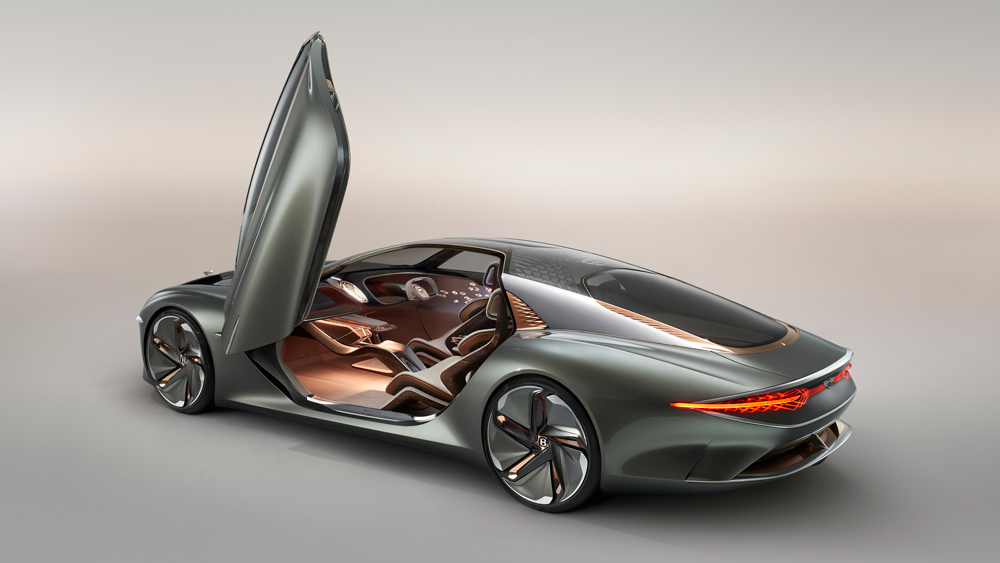 Bentley’s All-Electric, Autonomous EXP 100 GT Is the Marque’s Blueprint for the Next Century

The concept is built on a theme of sustainability, innovation and 5000-year-old wood.

In celebration of its 100th anniversary, Bentley has just officially revealed the EXP 100 GT—a concept that pays homage to the British luxury marque’s storied past while promising that the next chapter will be its best yet. “To build a fast car, a good car, the best in its class,” was the mandate given by W.O. Bentley when he founded his eponymous brand on July 10, 1919. But in the case of its latest creation, rolled out at an exhibition centre adjacent to the company’s factory headquarters in Crewe, England, we shouldn’t expect to see it, or even the category, until 2035.

“We wanted to make sure we were showing a credible concept and not a flying saucer or spaceship, because there is always that danger if you look too far into the future,” says Stefan Sielaff, Bentley’s director of design. “This is why we have chosen the horizon of 2035, because that is where our engineering and technology road maps reach out to.” 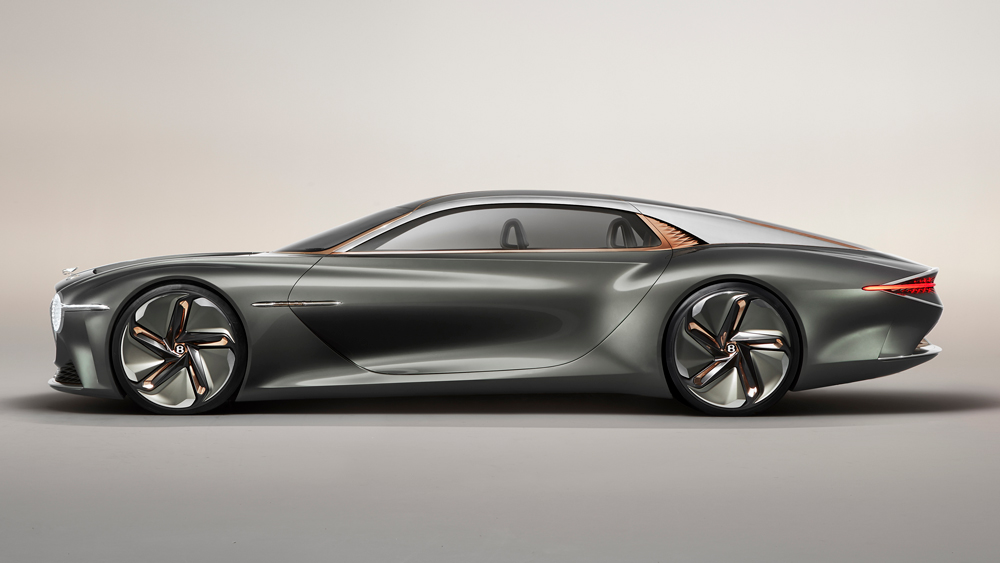 Within the EXP 100 GT—which measures 5.7 metres in length and roughly 2.3 metres width— is a combination of current and future tech that includes an all-electric power-train configuration and the ability to be fully self-driving. But, solving the divisive nature of autonomous advancement, the state-of-the-art grand tourer also allows for human piloting if that is preferred. Four motors will provide 2300Nm torque and enable the vehicle to sprint from zero to 100km/h in 2.5 seconds and reach 300km/h. And the targeted range is 700km on a battery that can be recharged to 80-per cent capacity in 15 minutes.

“All the technologies and materials in the car are either existing, in development or in research. There’s no speculation, but not everything is in the market” says Adrian Hallmark, Bentley’s chairman and CEO. “You couldn’t have the car today; you could have exactly the shape and with all of those materials, but without the autonomous capability and not with that power and range because the battery doesn’t exist—but it’s coming.” 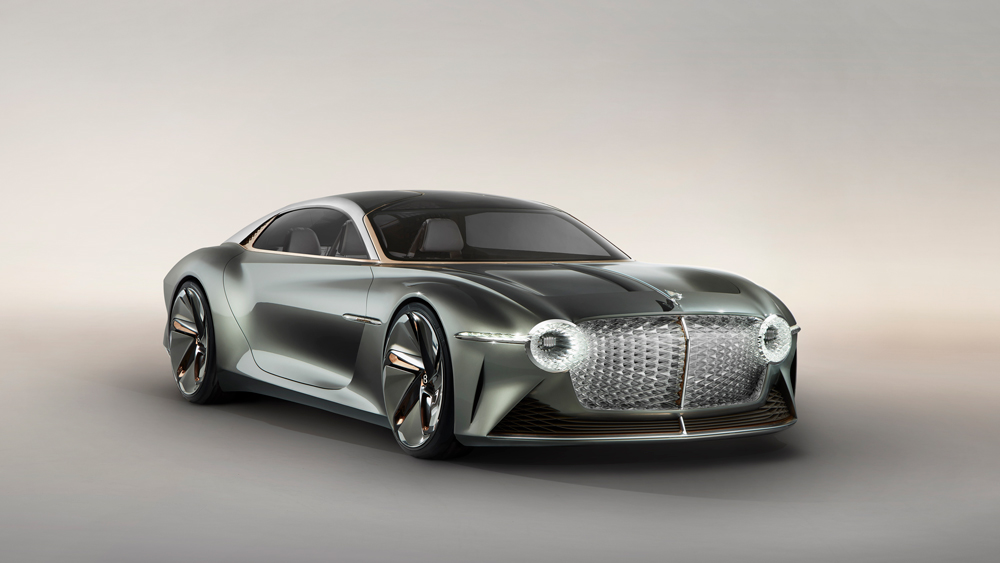 In fact, Hallmark anticipates unprecedented advancements in the latter’s development. “I bet you that globally there’s more investment in the next five years than probably the previous 100 in terms of battery technology—lithium ion and solid state,” he says. “The moment you can get the current batteries down in size by a half to two-thirds, and maintain the same power output, that makes [the EXP 100 GT] a megawatt car.”

And it’s all owed to an aluminium paperweight. It was that desktop detail that caught the eye of W.O. Bentley before the outbreak of WWI, and led him to look at applications of the lightweight metal in pistons as a replacement for iron and steel. The aircraft engines he subsequently manufactured for the Royal Naval Air Service eventually provided the springboard for his automobile production after the hostilities. Fittingly, the 1900 kilogram EXP 100 GT is also constructed of aluminium, along with carbon fibre, and accents of copper. And it’s all dressed in paint made from rice husk ash. 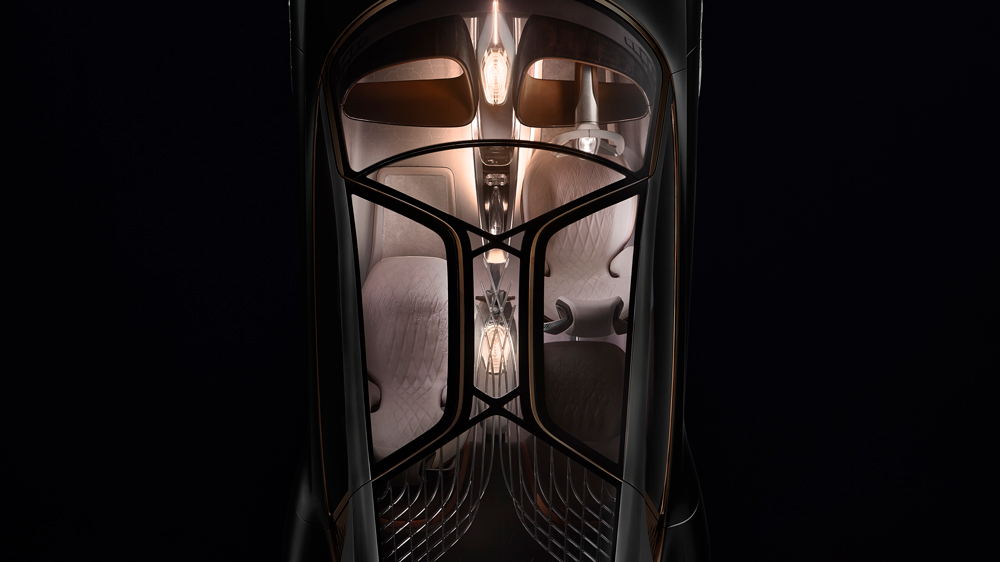 Entered through two-metre scissor doors, the cabin is a sybaritic encampment featuring ubiquitous glass, Scotland’s Bridge of Weir leather, crystal from Cumbria and, most noteworthy, trim from trees that fell as far back as 3300 BC.

“Underlying the design of the interior is actually a sustainability message with all the usage of the materials and the craftsmanship that we’ve engaged in with this car” explains Brett Boydell, head of interior design. “One of the best examples is the 5000-year-old river wood that we’ve used from Cambridge in the south of England. It’s a waste product from the fields, taken out for farming, and is preserved perfectly because of the peat that it sat in. We impregnated some of this reclaimed old British oak with a copper dust and eco-resin that stabilizes it so we can use it for milling. It really brings the age and grain of the wood to life.” 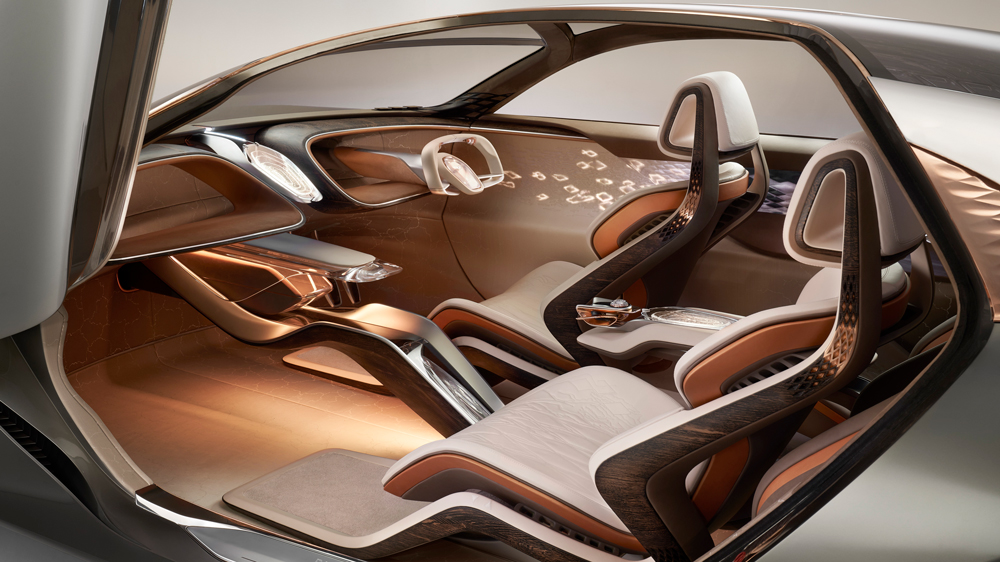 In contrast to that ancient accent are planned onboard advancements such as the Bentley Personal Assistant, an artificial intelligence component that will customize the interior environment, provide info and entertainment, and even monitor health metrics of the occupants. In addition, handling is constantly being optimized with active aero wheels and tires that can automatically enhance traction based on road conditions. 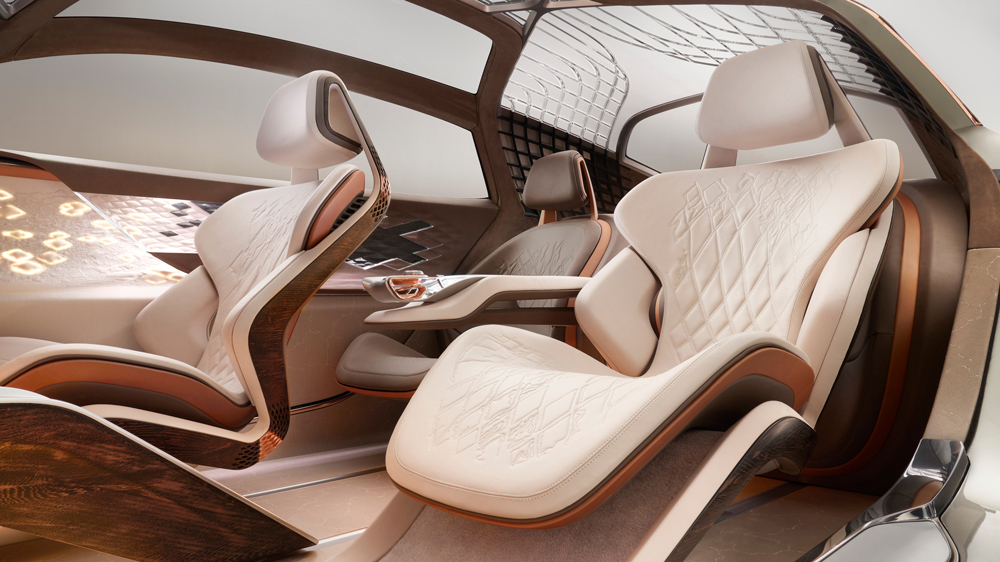 To dismiss all this as vaporware in prototype trappings may be short-sighted, as it seems that Bentley is just waiting for a few more innovations to unfold. Hallmark summed of the essence of the EXP 100 GT in the closing remarks of his presentation address: “We are proud to share our vision with you today; a future that takes the best of our last hundred years and all the opportunities of the next—and turns them into action.”