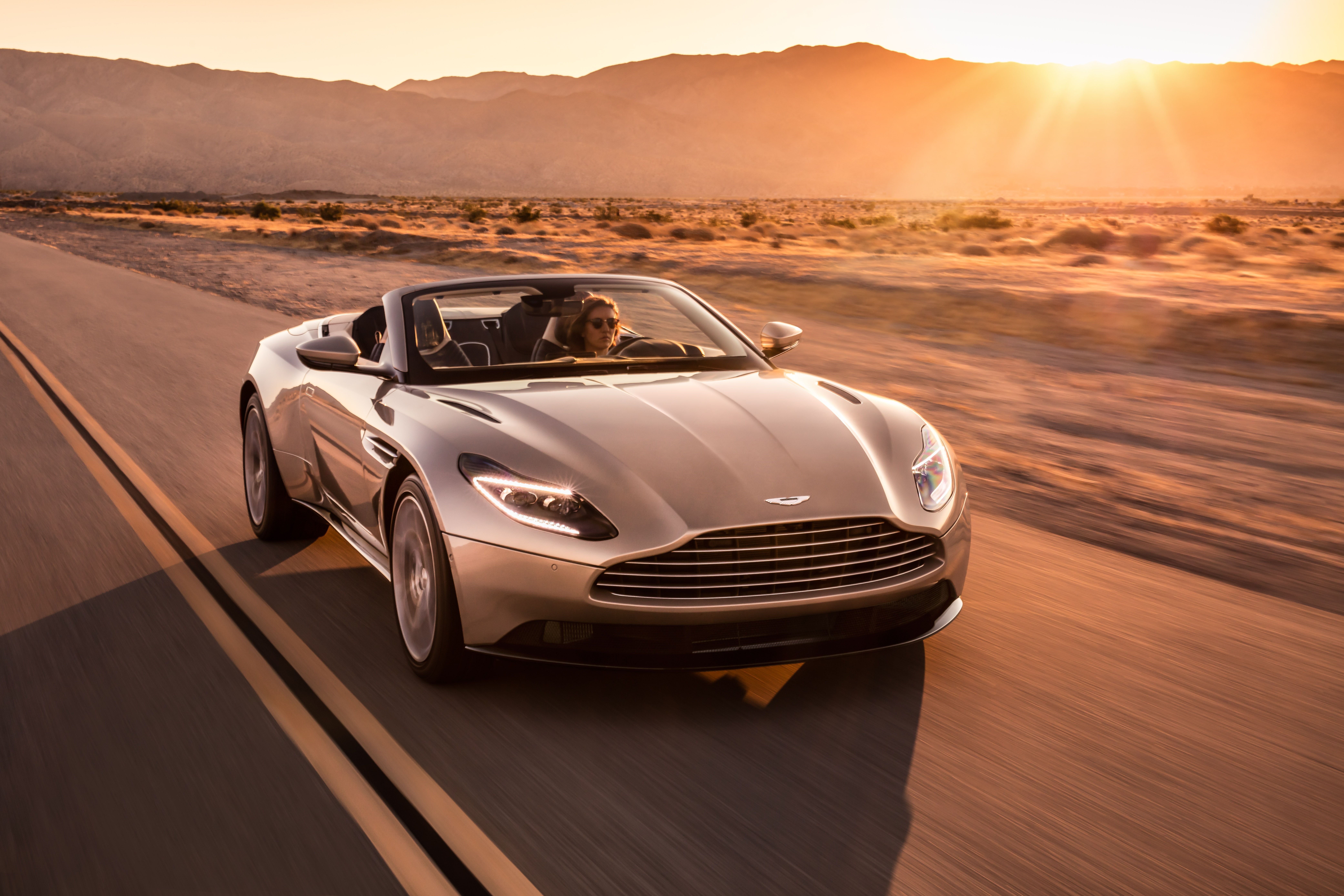 Aston Martin DB11 Volante: an open roof, a V8 engine, and thou

Speed is not the primary reason for choosing a convertible sports car – a coupe is typically lighter, stiffer and faster – but in at least one sense, Aston Martin reckons its new DB11 Volante soft-top has it covered.

True, the penalty for open-air driving enjoyment is that you wait an extra one-tenth of a second to reach 100km/h, but offsetting that is a quick-draw convertible roof that takes just 14 seconds to open, 16 seconds to close, and can be operated at up to 50km/h.

The $398,450 Aston Martin DB11 Volante, Australian deliveries of which will commence in May, is fitted exclusively with the 4.0-litre, twin-turbocharged V8 engine that supplemented the more romantic V12 in the DB11 Coupe range late last year. There are currently no plans to fit the 5.2-litre, twin-turbo V12 to the Volante convertible and that’s just fine by us: again, the maths have it that the V12 remains just a tad faster than the V8 in a straight-line sprint, but offsetting that is the fact that the V8 engine is 115kg lighter and sits farther back in the chassis, improving weight distribution and handling.

Comparing the Volante with its V8 Coupe sibling (priced from $368,000), the convertible at 1870kg is some 110kg heavier, a consequence of extra strengthening in its innovative, bonded aluminium chassis, plus the weight of the folding roof, its motors and mechanisms.

And what a roof it is. Aston’s goal was to have the Volante as attractive and quiet as the coupe, and the Volante’s eight-layer roof incorporates addditional bows to maintain its taut shape. The longitudinal joins are French-seamed (versus the more typical folded seams), presenting a flush surface that’s better both aesthetically and aerodynamically.

The interior is – well, see for yourself. Its comfort and functionality are enhanced by the unembarrassed use of a multimedia system based on the COMAND system from Mercedes-Benz, whose AMG performance division supplies the twin-turbo V8 sitting up front. It’s spacious and cossetting in the front cockpit; behind, diligent packaging of the roof’s scissoring side mechanisms leaves decent shoulder width, but the limited legroom renders the two rear seats suitable only for children.

Far better to leave the kids at home, clip in place the wind-blocking screen and head for your favourite winding road. Aston wanted the Volante to be all but indiscernible from the coupe in its dynamic feel and ability, addressing this with dedicated suspension components and revised tuning so as to re-sharpen the handling.

While the Volante’s character is still that of a grand tourer, it has to be said that the thumping, 375kW V8 engine and eight-speed auto transmission delivers an even more invigorating drive than the V12 DB11 Coupe – a combination of the V8 model’s sharper steering turn-in response and a broader range of better-defined mode options (GT, Sport and Sport+) for the engine and adaptive suspension. The Volante does 0-100km/h in 4.1 seconds and boasts a top speed of 300km/h. No bloated boulevardier, this.

Therein, perhaps, lies the true dilemma: not whether to choose a coupe or convertible, but whether to drive your 300km/h performance car as hard as you want, or slow down and smell the flowers. The DB11 Volante goes a very long way in doing both.