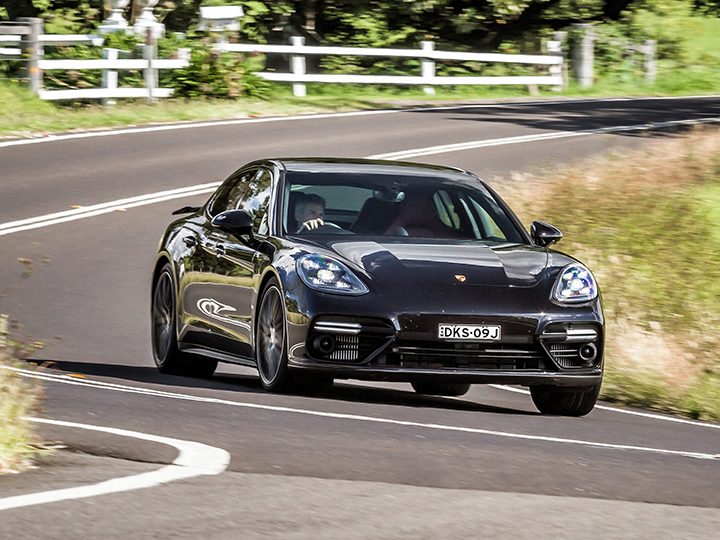 All hail the new era Panamera

The second iteration of the Porsche grand tourer successfully walks the tightrope of practicality and sex appeal.

It’s nearly 30 years since Porsche first experimented with a four-door alternative to its iconic, but relatively impractical 911. The prototype Porsche 989, built in 1988, was to house a new, front-mounted V8 engine in a strikingly styled fastback body. The 989 went through three years of very expensive development before the project was dropped in 1991.

Styling elements of that stillborn concept were incorporated in subsequent generations of the Porsche 911. But 18 more years would pass before another front-engined Porsche sedan emerged, as the belated fruition of that concept.

The category-straddling Panamera displeased Porsche purists almost as much as the Cayenne SUV had done in 2002, yet the hatchback sports sedan’s contentious and somewhat ungainly styling didn’t impede market success. Nor the introduction of a successor.

Porsche’s designers deserve full credit for their work on Panamera II. Despite a slight expansion to what were already sizeable dimensions, this all-new model is a much sleeker design that most onlookers will find attractive. Visual links to the 911 inevitably continue, yet this time they’re inherent rather than incongruous. This is most evident in the ‘flyline’ roofline that arcs much more naturally from the base of the windscreen, and a slimmer rear end. The new shape also brings new engines, a new infotainment interface and a new vehicle architecture.

The Panamera is the first VW Group model to sit on the highly flexible, Porsche-developed ‘MSB’ platform that will underpin other models such as the next Bentley Continental GT. Compared against the old Panamera, the new car extends by 34mm to an overall length of 5049mm; that stretch including a 29mm increase in the wheelbase.

That liberates extra interior space for a model that remains a strict four-seater, although the Panamera range is now expanded with a new, shooting-brake-style Sport Turismo variant that brings a three-person rear bench and additional luggage volume.

The application of materials, ample pampering features and an interior lavished with seemingly greater quantities of leather also suggest Porsche is not content with the Panamera merely being viewed as the sporty option in the $300,000-plus four-door club. Multiple high-resolution displays and a glass-like, touch-sensitive centre console make the biggest contribution to enhanced cabin sophistication, propelling Porsche firmly into the digital age. Influenced by Apple and Samsung mobile devices and inspired by the controls of the 918 Spyder, the centre console abandons the original Panamera’s button fetish and instead adopts words and symbols with haptic feedback. Only the temperature, fan and audio volume toggles remain physical, along with a rotary push-button controller that acts as an alternative manipulator of the prominent 12-inch central touchscreen. The greater relevance of the Panamera’s rear seats is evidenced by a secondary console featuring a smaller, but visually related, layout.

Even Porsche’s multi-dial instrument cluster migrates to Silicon Valley, while retaining one hand on decades of history by keeping the large, central tachometer strictly analogue.

That’s a word rarely applied to the driving experience of a modern car, of course, and the Panamera is no exception. Electronic chassis trickery is programmed to reduce body roll, quell understeer and monitor the vehicle’s dynamic attitude to optimise stability and ability. The latter pairing is also relative for a long car that’s also nearly two metres wide and flirts with a two-tonne kerb weight, despite an aluminium-steel hybrid body. It’s fair to say that narrow, winding roads are not the Panamera’s forte, where the limited feel from the steering would also be truly shocking in the context of a 911.

Yet on fast, flowing and interesting roads, the $376,900 Panamera Turbo variant we tested satisfied with its ability to brake urgently, point obediently into corners and stick stubbornly through them – all from a low driving position that is obviously well removed from Porsche’s other multi-door models, the Cayenne and Macan SUVs. All enjoyable at vast speed, of course. The Turbo badge may seem somewhat inapt, now that it no longer represents forced-induction exclusivity in the Porsche petrol-engine world, but it still represents mighty power and rapid, all-wheel-drive performance. You may not necessarily believe those figures initially, as the Turbo’s acceleration is deceptive. It feels exponential rather than explosive when you flatten the floor-hinged throttle pedal, but a glance at the speedo confirms its capabilities. It’s almost irrelevant that the Turbo S E-Hybrid, which combines the Turbo’s V8 with an electric motor, is a touch faster in all respects – though the $460,100 range-topping hybrid commendably achieves that using one-third less fuel.

The optional rear-axle steering also impresses. While it aids stability in high-speed corners and brings slightly quicker steering, the system is more noticeable for the way in which it transforms this limo-length car’s turning circle to the point where it almost invites comparison with London’s famous Black Cabs. The drivetrain’s new eight-speed PDK transmission is mostly effective, though it has a couple of minor flaws – this in spite of Porsche continuing to engineer the best dual-clutch manuals in the business. It still can’t match the low-speed smoothness of a conventional, fluid-coupled torque converter auto, and occasionally it refused our paddle-shifted commands to drop from third to second gear during spirited driving.

An option not yet available in Australia extends the active cruise control function by using GPS data, radar and video sensors to control gear changes, as well as acceleration and braking. InnoDrive’s intention is to save fuel while cruising along country roads, though the ‘co-pilot’ system never controls steering.

Although semi-autonomous driving is set to be part of Porsche’s future, the Panamera doesn’t require an electronic chauffeur to make clear that it has successfully shifted more bias towards luxury. And, crucially, the four-door achieves this without compromising the sportiness expected from the badge.