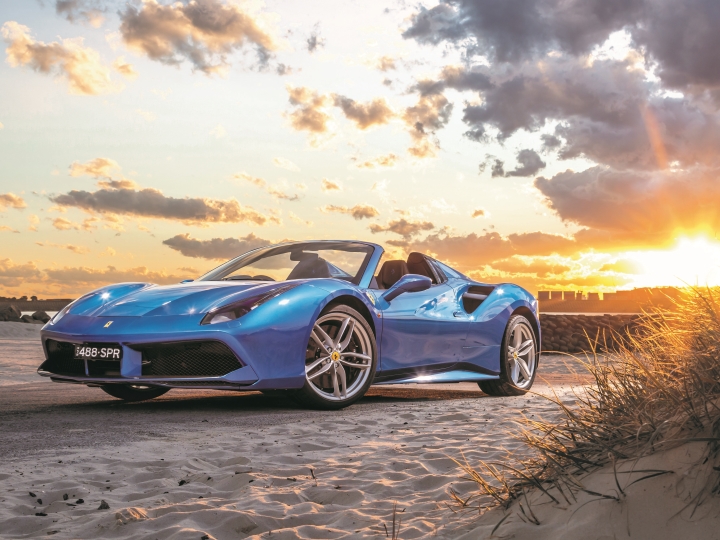 Stretching the legs of the Ferrari 488 Spider in its first drive on Australian soil.

Ferrari has been pulling sections of roof off its mid-engined V8s for nearly 40 years. The half-million-dollar 488 Spider, however, marks the first time that the experience has been as much about whooshing turbochargers as it is rushing air.

And arguably more pertinent to the Spider than its GTB hardtop twin is the effect of those titanium twin-scroll turbines on the 488’s aural experience. Open-top Ferraris are as much, if not more, about the driver being exposed to evocative engine noises as they are the elements.
Robb Report Australia, first to drive the new Spider locally, feels compelled to lower the roof immediately – especially as the weather gods have obliged with a sky coloured to match our 488’s optionally exclusive Blu Corsa double-layered paintwork.

While the 488 looks quite different in detail, if not silhouette, to its predecessor, the clever retractable roof is actually a carryover from the 458 Spider. In an elegant three-stage process, the two-piece roof performs a neat backflip into the space created by the rear hatch, which has first arched backwards before lowering to complete the operation in just 14 seconds. As we descend the Illawarra Escarpment south of Sydney, taking the scenic route to Wollongong via the postcard-primed Sea Cliff Bridge, stretching the Spider’s legs reveals how the new, force-fed V8 doesn’t plateau quite like the atmospheric one it replaces.

The 3.9-litre – the size is no longer related to the model name – maxes at 8000rpm; impressively high for a turbo engine, though one-thousand revs shy of the 458’s shrieking 4.5-litre.With only relatively minor improvements in fuel economy (three per cent) and emissions (five per cent), plus a 45km reduction in theoretical range due to the 488’s slightly smaller fuel tank, it could beg the question of whether the sonic sacrifice is sacrilegious. Yet the sounds emanating from the 488’s wide-diameter exhaust pipework and flatplane-cranked eight-cylinder still stir emotions. And then you contemplate the performance. Reaching 100km/h from standstill four-tenths of a second quicker than the 458 Spider in a flat 3.0 seconds is impressive enough, but the work of the turbochargers is most stunningly demonstrated in the 0-200km/h test, where an 8.7-second time surpasses the 458 Spider, and almost plausibility, by 2.1 seconds. The quarter-mile marker is dissected in 10.4 seconds.

Where the 458 Spider would develop its momentum rapidly but progressively, the 488’s speed grows exponentially – from fast to expletively quick. Via the rapid-fire seven-speed dual-clutch transmission, you paddle through successively larger tidal waves of torque as Ferrari’s engine management system staggers available Newton metres through the ratios.

It’s designed this way to both manage traction and mimic a normally aspirated engine, so the maximum torque of 760Nm isn’t actually unleashed until seventh gear (from 3000rpm).It’s still easy to get addicted to holding onto gears, even with the knowledge that high revs are no longer necessary and that short-shifting will deliver huge responsiveness in the higher gears. Turbo lag? If it exists, it’s throttle delay measurable by electronics rather than consciousness. This turbo V8’s more instantly accessible performance is arguably a better match for the Spider, which we’re told is driven more regularly than the average GTB – in fact, typically double the annual distance.

Ferrari also says the typical GTB driver is racier than the average Spider owner, though this time the V8 twins are not just matched in performance, but also share chassis stiffness and spring and damper rates. Traditionally, the Spider has trailed in rigidity and run a slightly softer suspension set-up to compensate.

This has been achieved by the faster-acting dampers of the 488’s magnetorheological suspension, borrowed from the 458 Speciale and now integrated into the Einsteinian electronic aids that put the Ferrari into another dimension dynamically.

The magnetorheological suspension applies an electric charge to magnetic particles suspended within the damping fluid, altering the particles’ alignment and thereby changing the viscosity of the fluid.

Now ascending another Illawarra region landmark, the hairpin heaven of Macquarie Pass, the Spider’s handling is nothing less than razor sharp and never overwhelmed by the immense performance on tap. The front end darts between corners, completely obedient to turns of the weighty and communicative steering wheel. The traction out of first- and second-gear bends is particularly remarkable as the E-Diff and F1-Trac systems work their magic.
Selecting Race or CT Off on the steering wheel’s manettino switch also permits more lateral movement from the rear end, courtesy of the Side Slip Angle Control 2 system. They might otherwise have named it the Go-Sideways Assistant.

A carbon-ceramic braking system derived from the LaFerrari hypercar reduces stopping distances – which is necessary considering the Spider’s newfound speed between corners.

All the while, the airflow around the cabin is less violent than that going under and around the car (though being guided by intricate aerodynamics to pin the 488 to the ground).

While the occupants’ hair is in no danger of becoming dishevelled even with the side windows down, the Spider itself can still be ruffled. Strike more prominent bumps in the road and the steering wheel and windscreen will spasm momentarily, as energy is dispersed through the lid-less structure. We also had to secure the seatbelt on the passenger side to stop it from rattling against the (optional) Goldrake carbon-fibre racing seat.

This is unlikely to dissuade a buyer intent on choosing the $526,888 Spider over the $469,888 GTB – especially as closing the Spider’s roof provides similar coupé-like cocooning and welcome isolation (and not just from wind and noise).

Cruising back to Sydney via the Hume Highway, there’s minimal wind and road noise, and the ride is firm but comfortable, even in the midst of the suspension’s determinedly disciplined wheel control. This is also a good time to appreciate the 488’s cabin, which may be an evolution of the 458’s yet emphasises again how far Ferrari interiors have come in the past few years, even compared with the previous-generation California of 2009.

Driver-oriented control pods exemplify the exemplary ergonomics, while the dominantly leather cockpit was further embellished in our test car with optional Extracampionario stitching to match the blue exterior.

Your mood is unlikely to ever match this car’s colour. While Ferrari’s latest mid-engined V8 sun-worshipper may no longer be about reverentially stratospheric revs, it smashes through another performance ceiling while remaining a highly useable supercar package.