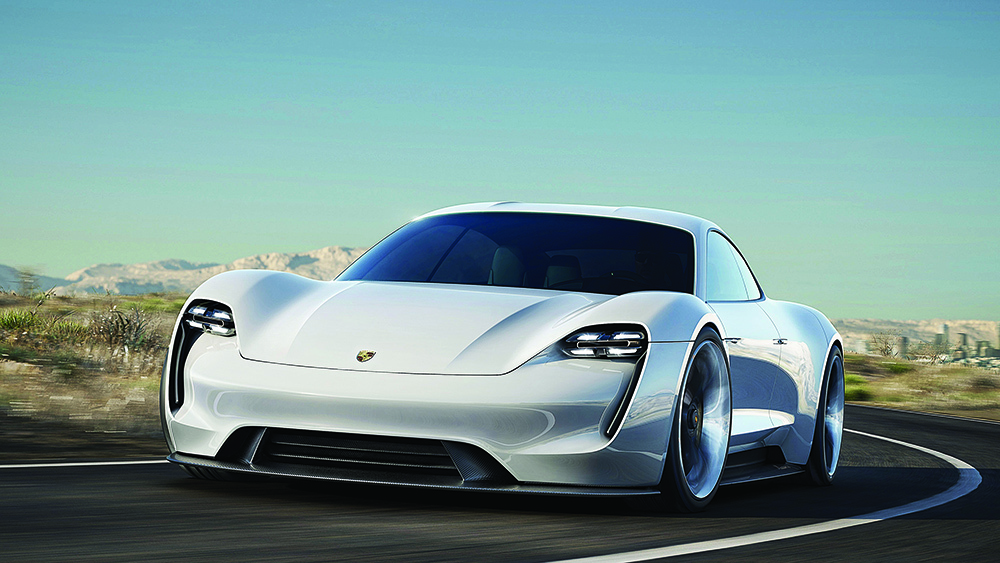 Estimated to fetch up to $2.8 million, the car comes with an entry in the next Porsche Rennsport Reunion.

During the RM Sotheby’s Monterey sale on August 24 and 25, a 1968 Porsche 908 Works Short-Tail Coupe will come with a truly special bonus—instant participation in perhaps the most vaunted of Porsche racing car gatherings: Rennsport Reunion.

“Any Porsche 908 race car is quite rare, with only 31 ever built, but this one is especially so being a factory works car,” says David Swig, a specialist with RM Sotheby’s. “It’s a turnkey, ready-to-race 908. And not only can you run it at vintage events like Le Mans and Daytona, but it’s also already entered at Rennsport VI at Laguna Seca in September.”

The sixth iteration of Rennsport will once again bring together some of the finest examples of Porsche’s racing heritage, a history studded with victories at the top levels of motorsport—often despite the marque being an underdog. 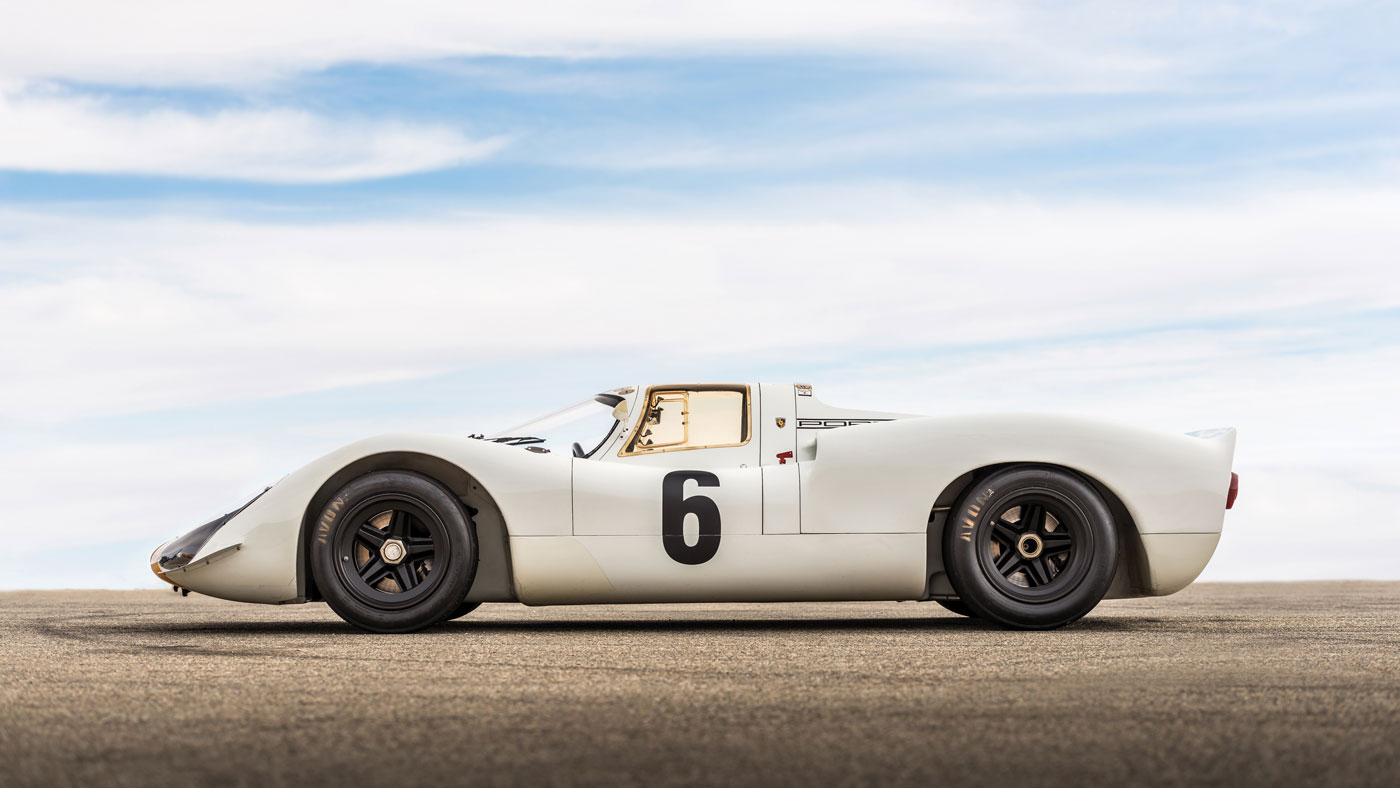 One of only 31 examples built, this 908 has already been entered in the next Porsche Rennsport Reunion. Photo: Courtesy RM Sotheby’s.

That was particularly true in the early days of Zuffenhausen’s road warriors, where the marque’s mid-1950s 550 Spyder shocked Ferrari and other fire-breathing machines. The 550 often bested Maranello’s 12-cylinder sensations thanks to the small but high-revving Fuhrman four-cam, four-cylinder engine that powered the 1,300-pound car.

For trivia buffs, a 550 Spyder is also known for being the car which James Dean was killed in after he crashed at the junction of California State Route 46 in 19555.

That auspicious and successful start rolled into the next decade, as a series of cocooned, low-slung Porsche rockets continued to take podium finishes around the world. The car, crossing the block at the Monterey Convention Center, is a best-of-breed example and is one of more than 100 lots slated for the company’s block. 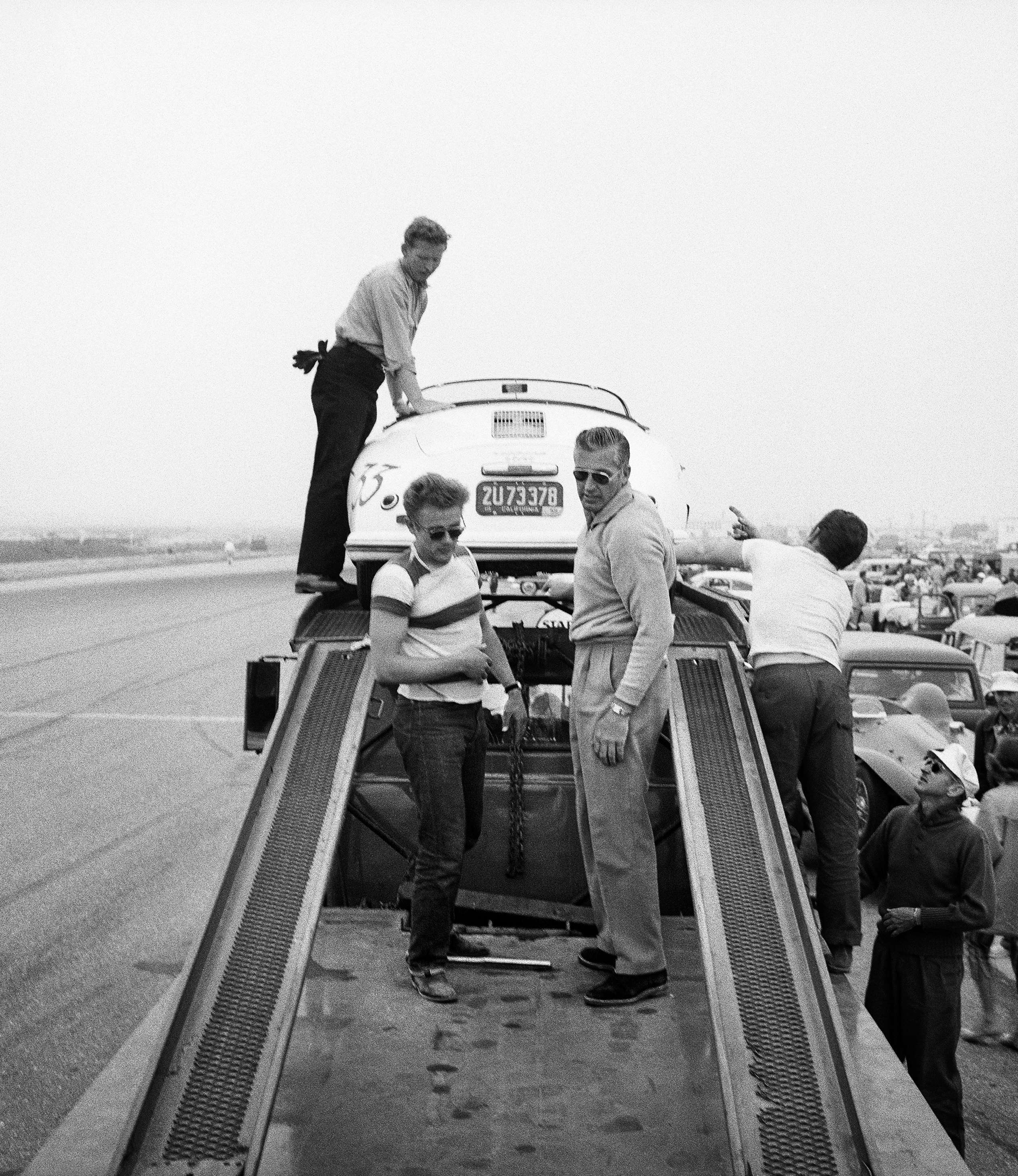 James Dean helps to load his 550 Spyder onto a tow truck. Photo: Getty

Chassis No. 908-010 started as a factory-built three-liter, eight-cylinder competitor and was piloted by legendary drivers Vic Elford and Jochen Neerpasch at the 1000 Kilometers of Spa-Francorchamps race in 1968. On the hilly and treacherous course, the 908 might have given the Ford GT40 (driven by Jacky Ickx) a run for its money had the car not slid off the track and hit a telephone pole. The accident left Neerpasch with a concussion and the 908 with major damage.

The car’s life after that was a familiar one for old racers. First, the Porsche factory put it in storage, given the damage, before the body and chassis were eventually sold to a Swiss collector. Decades later, the 908 made its way to the U.S., where a full restoration in 1999 saw the vehicle eventually return to its former all-white-with-yellow-nose glory in time for 2004’s Rennsport, where a few drivers—including Elford—signed the underside of the rear engine cover.

Over the past dozen years, chassis No. 908-010 has appeared at many vintage racing events and concours, invariably scoring trophies and praise. With a value estimated at up to £1.9/AU$3.6 million, this 908 is likely destined for another avid collector’s garage, where it will hopefully be prepped to resume its place on the track.

“This won’t be an impulsive buy for someone at that price,” says Swig, noting that its Porsche 904 and 906 ancestors recently sold at auction for roughly £1.4/AU$2.5 million. “Those are great cars, but if someone is in the market for a classic vintage Porsche racer, the 908 turns up the boost nozzle on both the level of driving intensity and skill required, with 350 hp in a super-light car.”