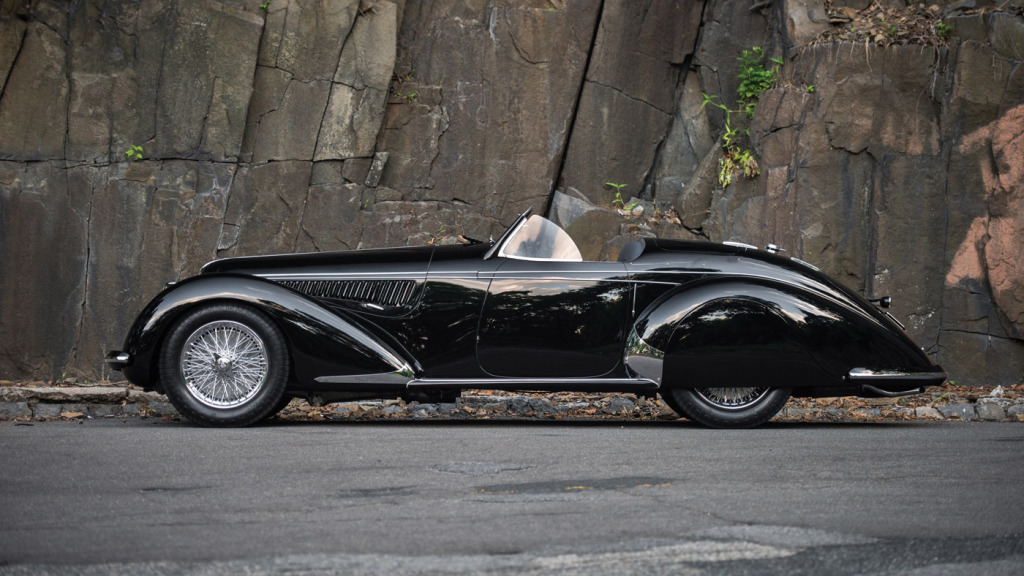 5 of the most collectible convertibles in the world

These top-optional automobiles, from the last century to now, continue to wow at auction.

Spot any car-borne canines cruising with their head out of the window, and you can’t help but notice their expressions of bliss. But they’re not alone. Open-air motoring’s sensory caress is why we all find the convertible so captivating.

Initially, topless touring was the primary mode of automotive transport until higher speeds began to wreak havoc on hairstyles and hamper personal safety.

Over the decades, the convertible has seen demand rise and fall much like its roof, but a few examples have become increasingly coveted by collectors. You might not see the following cabriolets cruising on the road this summer, but each have certainly had their moment in the sun when sold on the auction block. 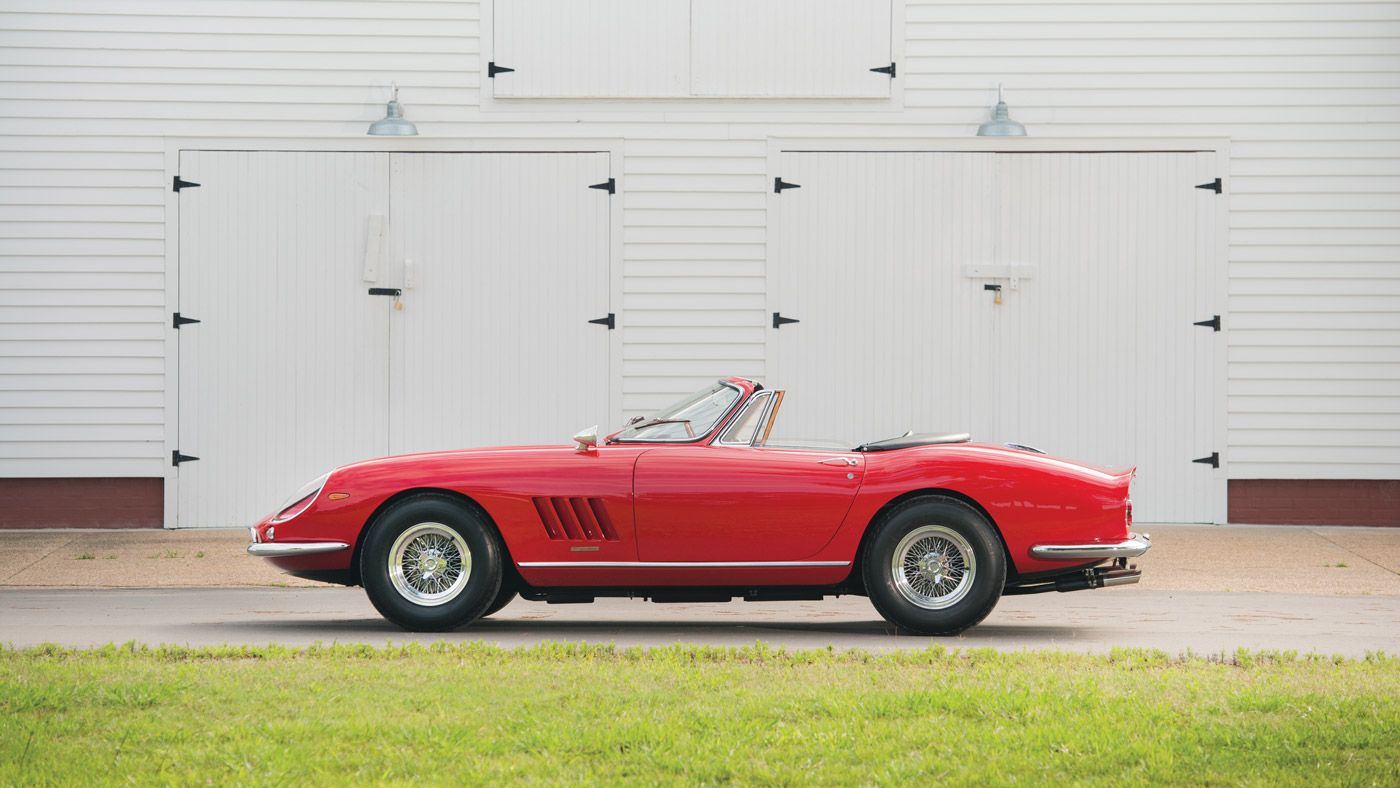 The 300 hp spider—with a four-cam V-12 and five-speed manual transmission—owes its existence to Louis Chinetti, the first Ferrari dealer in the United States. It was Chinetti who convinced Enzo himself to create an open-air automobile specifically for his stateside clientele. Bedecked with North American Racing Team (N.A.R.T.) badging, the model not only starred at the 12 Hours of Sebring (finishing second in class) but also on the silver screen alongside Steve McQueen in The Thomas Crown Affair.

Chassis No. 10709—with matching engine No. and a body by Carrozzeria Scaglietti—was acquired new by Chinetti’s friend Eddie Smith Sr., a hosiery magnate in North Carolina. The vehicle remained in his family for 45 years until it sold through RM Sotheby’s for US$27.5 million in 2013. Proceeds from that price went to various charities dear to the Smiths.

Roughly 80 years ago, the Alfa Romeo 8C 2900 was the equivalent of the modern supercar, breathtakingly beautiful and the benchmark of power and performance. The Italian marque’s model was inspired by its P3 and 8C 2300 racecars developed by Vittorio Jano and his team. The 2900A, introduced in 1935, was competition focused and victoriously swept the 1937 Mille Miglia. 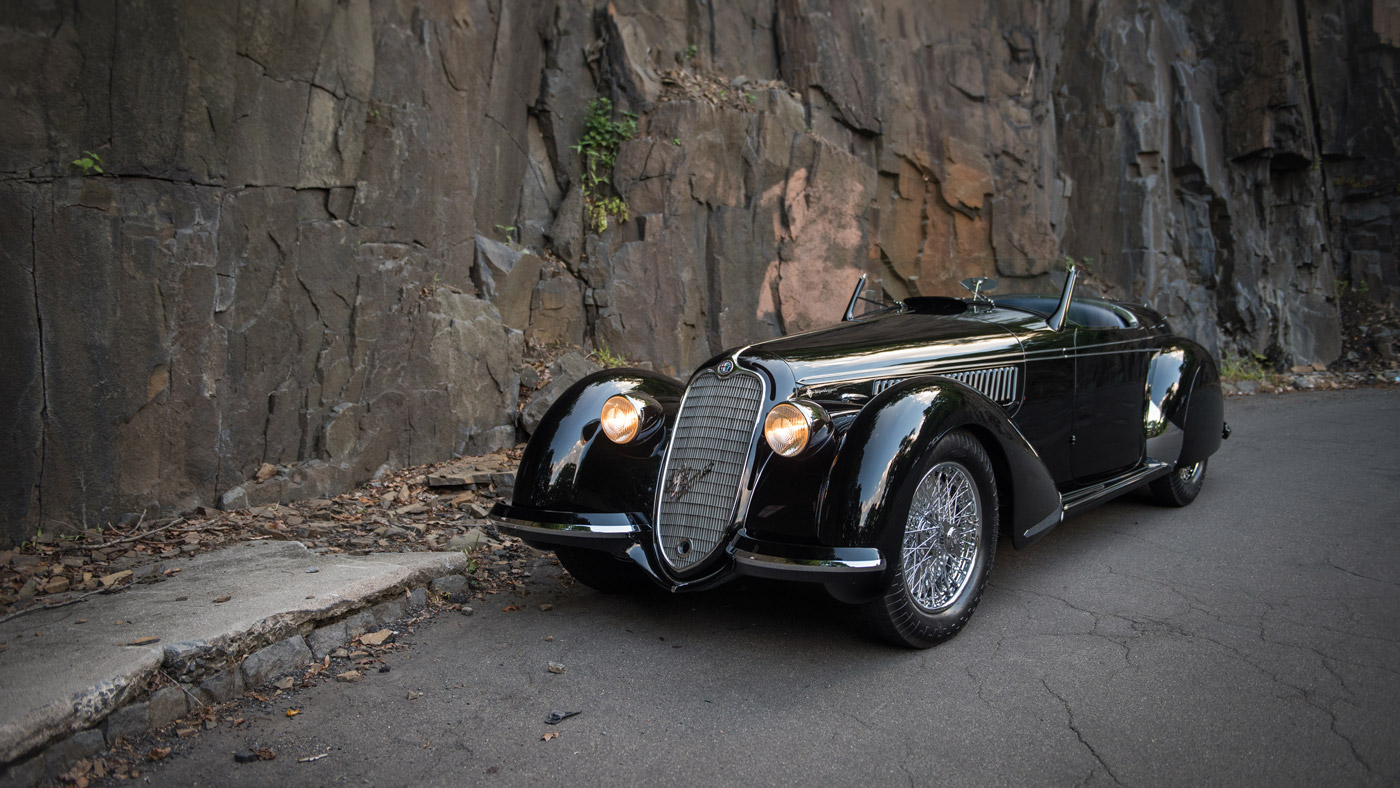 In 1999, this Alfa Romeo 8C 2900B Lungo Spider was honored as the Most Elegant Convertible at the Pebble Beach Concours d’Elegance. Photo by Darin Schnabel, courtesy RM Sotheby’s.

This 1939 Alfa Romeo 8C 2900B Lungo Spider—chassis No. 412041—had its body built by Carrozzeria Touring, and is one of only 12 convertible examples from the coachbuilder in existence. The car is a compilation of original components—including body No. 2027 and engine No. 422042—and its primary restoration was completed in 1997. Two years later it was named the Most Elegant Convertible at the Pebble Beach Concours d’Elegance. In 2016, the car returned to Northern California, this time as an auction lot presented by RM Sotheby’s at Monterey Car Week. The Alfa Romeo raked in US$19.8 million.

Another exquisite example of pre-war workmanship is the Mercedes-Benz 540 K Special Roadster, produced from 1936 through 1940. Powered by an inline eight-cylinder engine assisted by a Roots supercharger, the art deco automobile delivered 180 hp and topped out at 177 kmh. 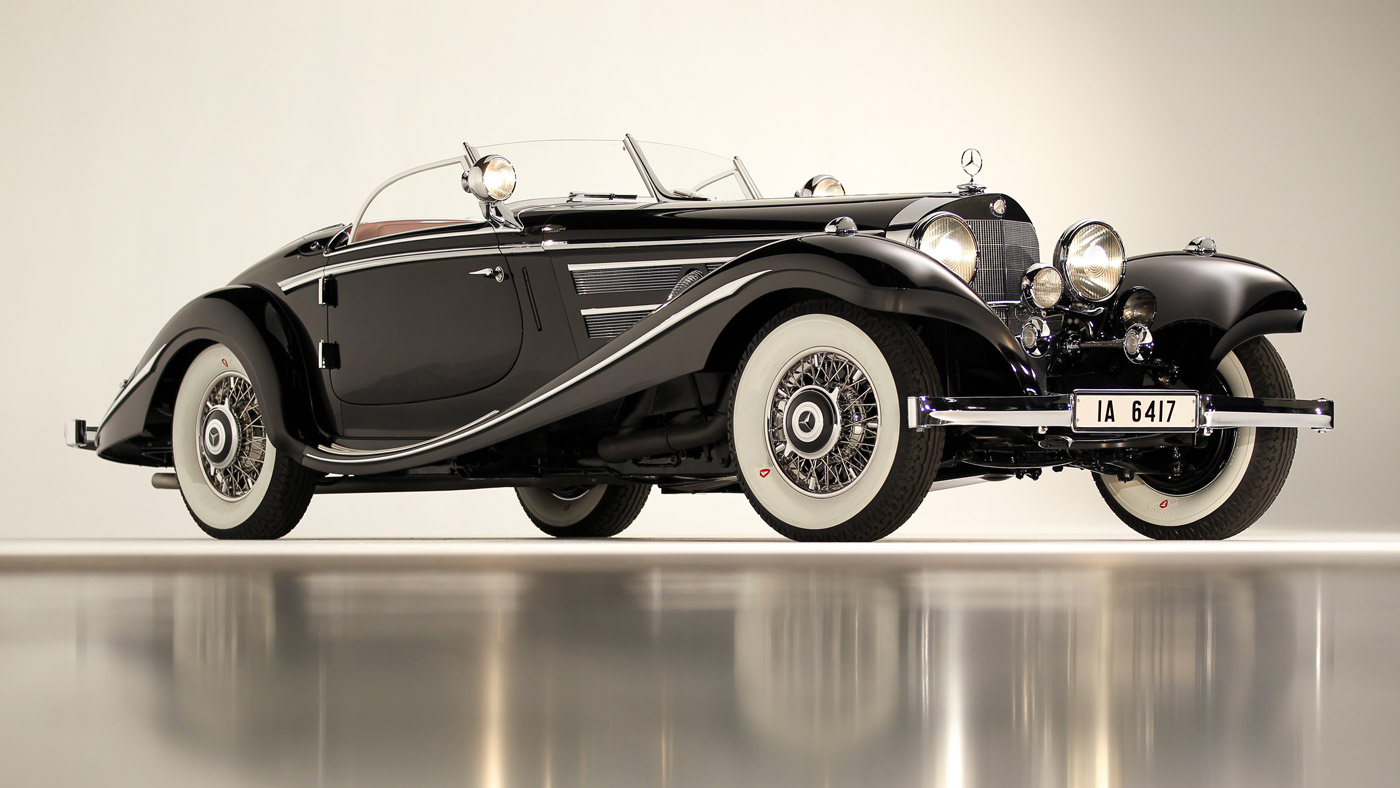 A courtly convertible, one example of the model—chassis No. 130949—made its way to the von Krieger family of Prussian nobility. The main pilot was Baroness Gisela von Krieger, a sartorial siren who traveled in the most rarified social circles. In 1942, the roadster joined Gisela in Switzerland, where she and her family had fled after the Nazi rise to power, and eventually followed the Baroness to Greenwich, Conn. It stayed stateside in her stewardship for about 40 years. After Gisela’s death, in 1989, the hibernated car soon left the family’s care and the new owner commissioned restorer Chris Charlton to bring it back to former glory—right down to the von Krieger crest on the door.

On September 9, 2017, auction attendees at the RM Sotheby’s Ferrari—Leggenda E Passione sale in Maranello, Italy, bid on a beauty that had not yet been built. The car they were competing for was none other than Ferrari’s LaFerrari Aperta, a herculean hybrid that combines a 6.3-liter V-12 with a kinetic energy recovery system that results in a total of 949 hp and 664 ft lbs of torque. The rear-wheel-drive roadster, which features the same torsional rigidity as its coupe counterpart, is able to rocket from zero to just over 124 mph in under 7 seconds and reach a top speed of 349 kmh. 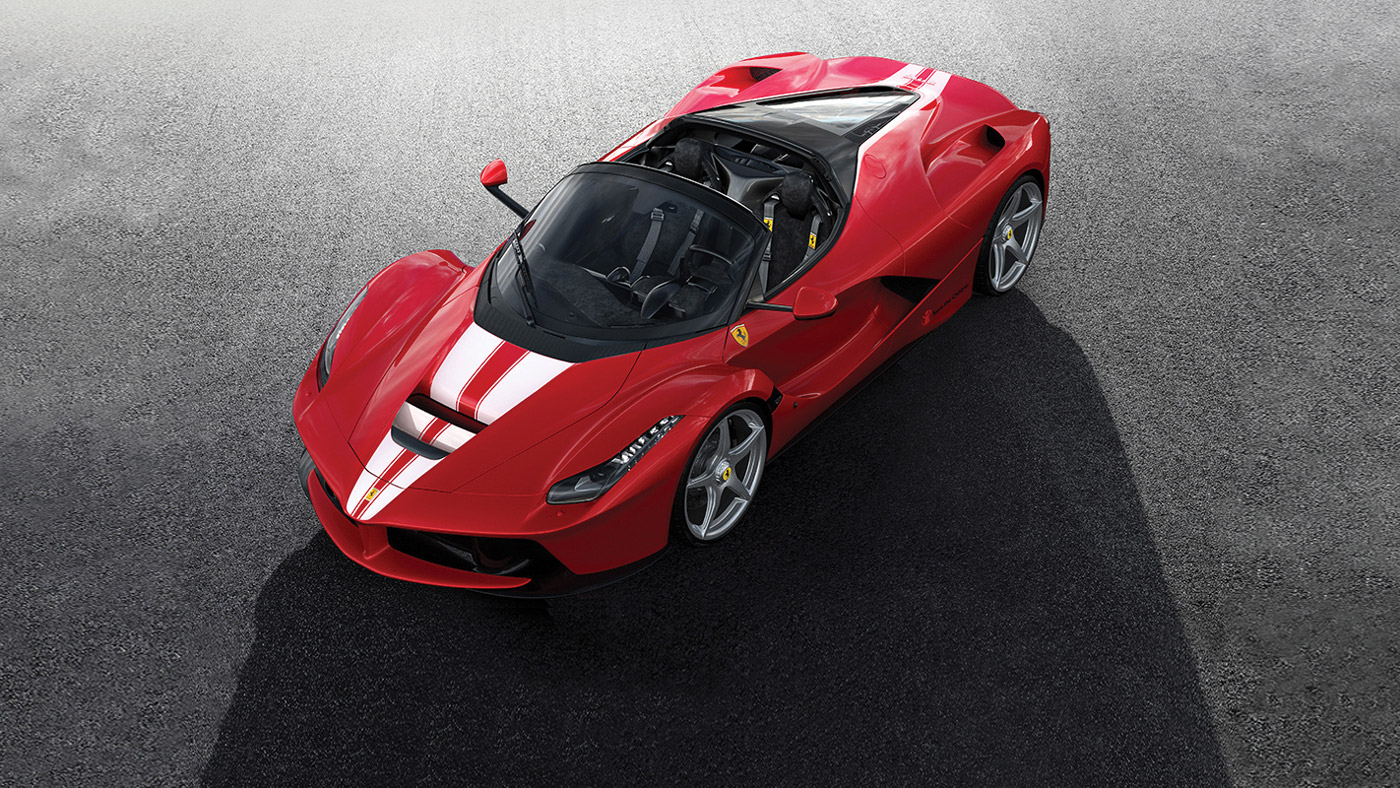 Only 210 examples of the LaFerrari Aperta came to fruition. Photo: Courtesy RM Sotheby’s.

The one-of-a-kind example on offer was to be the last of 210 produced, and would be dressed in metallic Rosso Fuoco, with a black Alcantara and carbon-fiber trim interior with red accents. Dual metallic Bianco Italia racing stripes on the exterior completed the unique livery commemorating the marque’s 70th anniversary.

Ownership of the cutting-edge convertible came at a cost of approximately US$9.8 million, setting a record for the highest auction amount paid on car from this century. All proceeds went to Save the Children, a charity providing relief to youth in need throughout the world.

The Bugatti Type 57 line was born from the imagination of Jean Bugatti and comprises such iconic cars as the Aérolithe and Type 57 SC Atlantic. The “S” stood for the French word surbaisse, meaning “lowered”—a reference to its chassis. The race-focused ferocities won numerous contests, including the 24 Hours of Le Mans, where one set a record for average speed at 137 kmh. 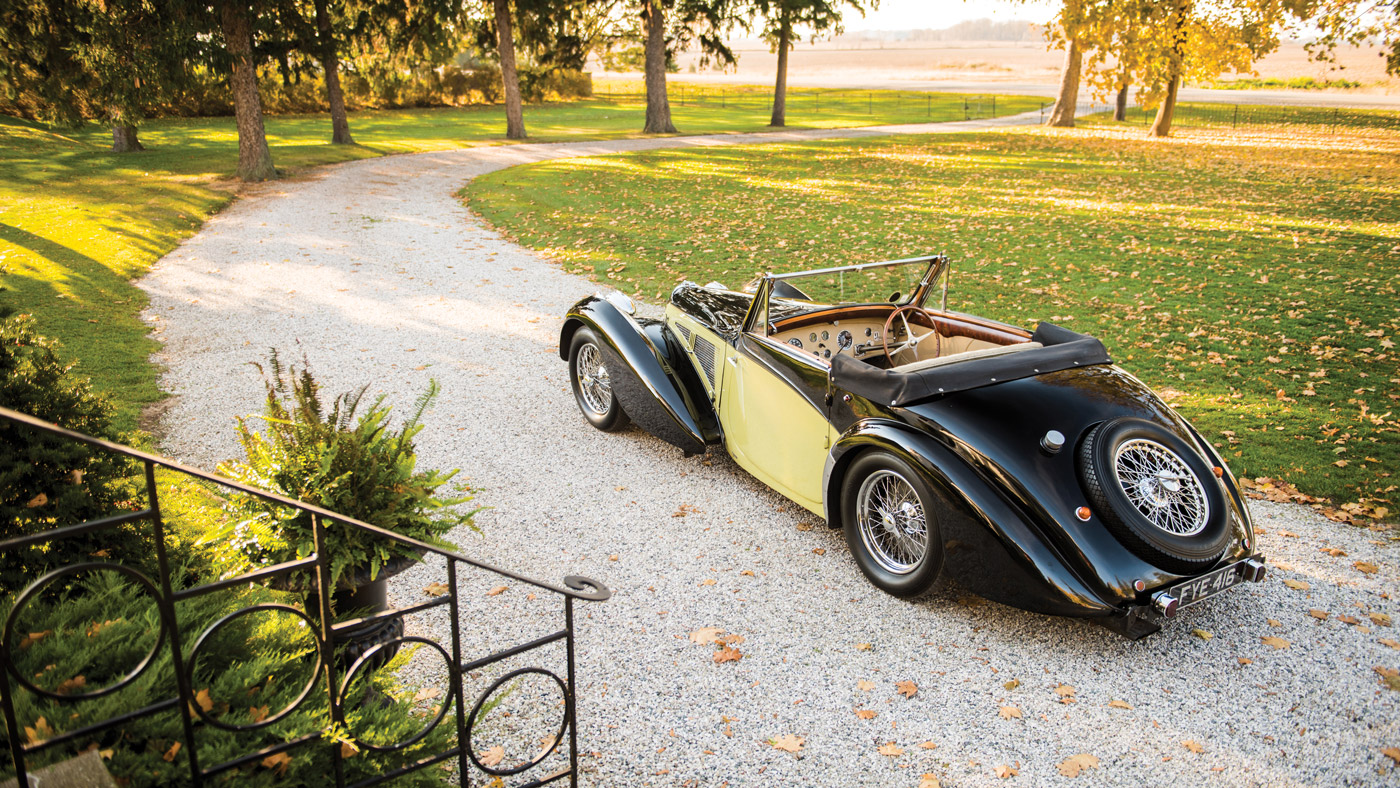 Chassis No. 57513 is among three remaining cabriolets with coachwork from Carrosserie Vanvooren. Photo by Darin Schnabel, courtesy RM Sotheby’s.

Only 42 examples of the Type 57S were produced, and chassis No. 57513 is among three remaining cabriolets with coachwork from France’s Carrosserie Vanvooren. Few cars can claim absolute authenticity the way this one can, as it comes complete with original body, engine, and gearbox. The open-air automobile’s provenance—both as a racer and tourer—comprises just six stewards, including T.A. Roberts and Claude Decoster, vice president of the British Bugatti Club and president of the French Bugatti Club, respectively.

The Bugatti brought bidding to a boil at the 2017 RM Sotheby’s Amelia Island sale, moving on to its seventh owner for US$7.7 million.