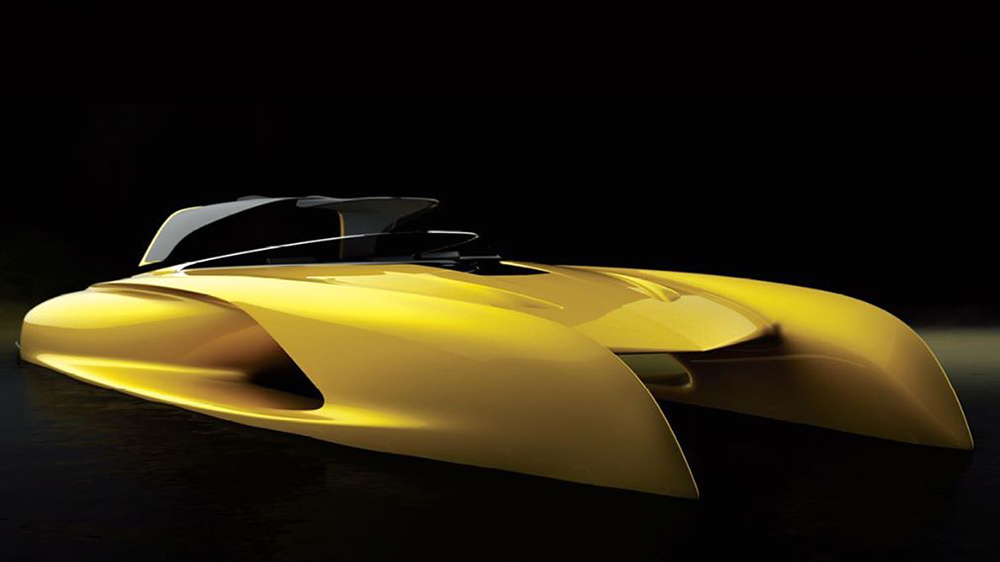 A Bugatti for the Water? This New Tender Concept Might Make Your Hypercar Jealous

The boat was created by Etienne Salomé, the designer behind the La Voiture Noire.

Ever wondered what it would be like to drive your Bugatti on the ocean? If so, you’re not alone, apparently. After years of helping Bugatti build its reputation for daring style, designer Etienne Salomé is hoping to bring some of that flare to the world of boating.

The man responsible for the Bugatti La Voiture Noire—the world’s most expensive car—has decided to take on a new challenge and start his own watercraft company, the eponymously named Salomé Yachts. And the brand’s first project, the Atlantic tender concept, proves that the designer’s trademark sculptural style works looks just as well in water as it does on pavement.

But Salomé hasn’t just brought the skills he honed at Bugatti to his new role; he’s taken inspiration from the supercar maker as well, according to Designboom. The boat looks like a floating F1 race cars—and that’s no coincidence. Salomé also took some cues from what he considers to be the most beautiful vehicle of all time, the Bugatti Type 57SC, otherwise known as the Atlantic. The result is an ultra-aerodynamic aesthetic that is sure to turn heads but also helps increase stability and reduce drag.

At Bugatti, Salomé saw firsthand that adventurous design must be paired with performance to match, and the Atlantic Tender is no different. The 39-foot (12 metre) boat will be powered by twin 440hp Volvo engines, which combine with its smooth and flowing design to push it to speeds of between 55 and 60 knots. Additional features include a Garmin glass cockpit, room for up to nine passengers and self-docking technology, making it a zippy and stylish option for a quick adventure away from the yacht.

While still a concept, it’s looking as if the Atlantic will become a reality in the not-too-distant future. Salome reportedly hopes to have 12 examples of the tender ready for next year’s Monaco Yacht Show. (No pricing is available yet.)

Of course, if you just can’t wait for Salomé’s tender, there are some other options out there for those looking for a stylish tender. Vanquish Yachts’ Vanqraft VQ16 may not be as stylish or spacious as the Atlantic, but it does combine the best parts of a water scooter and a yacht into one package.

Salomé Yachts
ADVERTISE WITH US