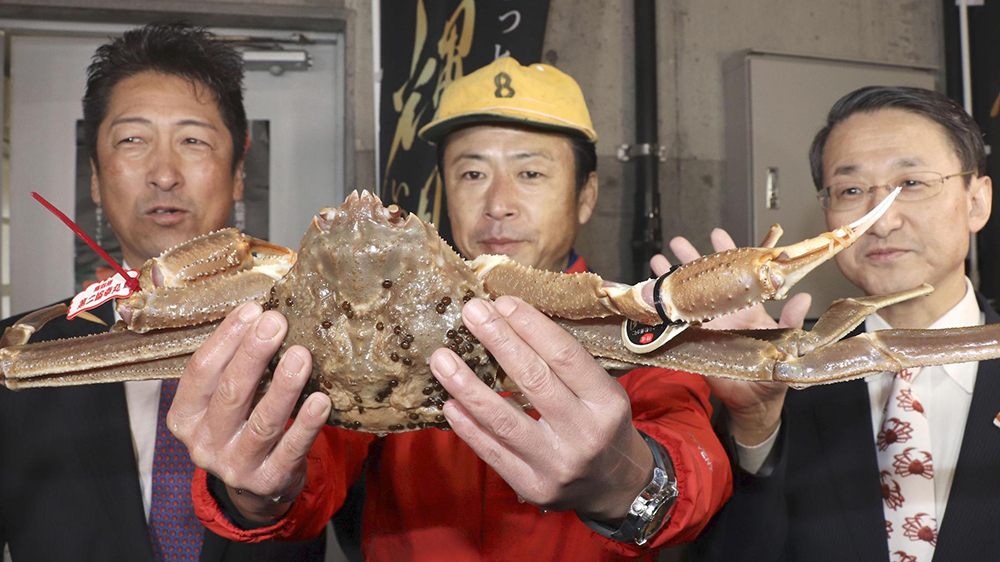 The World’s Most Expensive Snow Crab Just Sold for $66,300 at Auction

It’s no reason to get crabby.

Snow crab season in Japan has started with a bang—or snap, perhaps. That’s because a crustacean caught in the waters of the Tottori Prefecture just sold for a record-breaking $66,300 (¥5 million) at auction.

The itsukiboshi crab—itsukiboshi means “five shining stars”—clocked in at a hefty 1.22kgs. and had a 14.4-cm shell, according to the local fisheries association. The swimmer was caught shortly after the fishing season officially opened at midnight on Tuesday and was snapped up during the year’s first auction at Tottori port.

The winter delicacy went home with local crab seller Kanemasa Hamashita Shoten and will be sold to a restaurant located within the high-end shopping district of Ginza in Tokyo. “We came to this year’s first auction hoping that we would bid the world’s highest price again,” an official from Kanemasa Hamashita Shoten told the Japan Times. “I believe it is a good crab filled with meat.”

Last year, the same seller forked out $26,500 (¥2 million) for a gourmet crab, which was subsequently recognized by Guinness World Records as the most ever paid for a crab. This itsukiboshi smashed the record price—eclipsing it by roughly $39,000—making it the world’s most expensive crab and the new undisputed King Crab.

But it’s not just the snow crab’s sweet meat that provoked five figures. In Japan, bidders routinely part with astronomic sums to secure a seasonal first and the food is treated like a trophy, rather than fodder for your bento box. Back in January, a big fish in the sushi world paid a whopping $4.4 million for a giant tuna at Tokyo’s Toyosu fish market and a few months later, two melons went for US$45,000.

To prevent overfishing, Tottori has recently adopted stricter fishing rules regarding the size and number of crabs that can be caught. This will no doubt increase the price of the crustacean, thanks to that old free-market chestnut: supply and demand.