Beyond battling all that COVID has brought, the acclaimed Sydney chef is also expanding, adding to Paddington’s Saint Peter and the adjacent Fish Butchery with soon-to-open takeaway effort Charcoal Fish.

Then there’s the new book, Take One Fish.

A follow up to 2019’s multi award-winning The Whole Fish Cookbook, it sees the Robb Report Culinary Master continue his mission to educate and inform on waste minimisation and the dynamic multiplicity of fish. 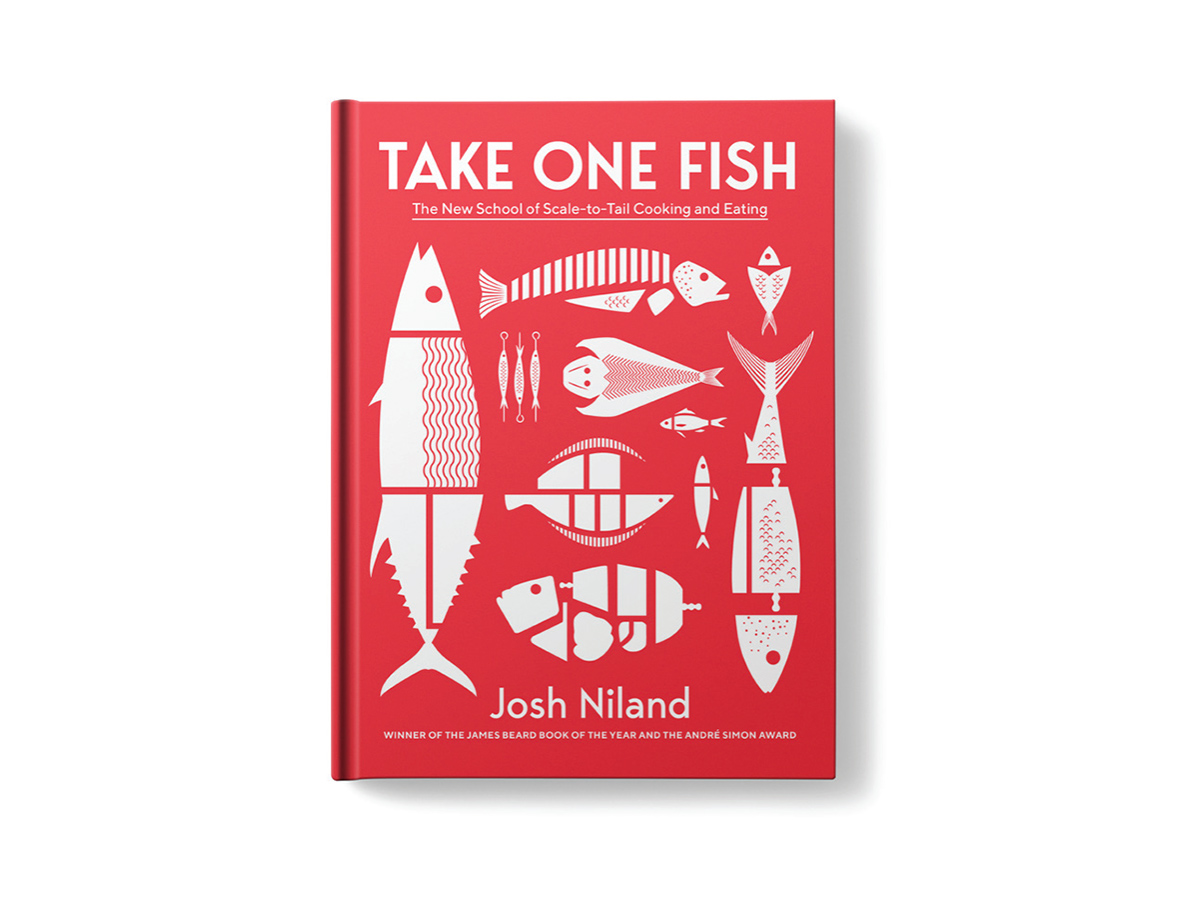 The cookbook homes in on just 15 global varieties —  Niland curating this selection based on availability and suitability while also exploring a broad spectrum of cooking methods.

We spoke to the accessible and passionate chef about the pending release, the year that’s been and where to from here in regards to sustainability and the future more generally.

Robb Report: Let’s start with your new book, how does it continue the narrative of The Whole Fish and where does it differ?

Josh Niland:  The Whole Fish Cookbook was not only my first cookbook but I think at the stage it came out, I’d been cooking for around 15 years, so there was a whole lot … I won’t say ego, but a whole lot of me, personally, that I wanted to make sure that people could see. I suppose that was the success of the book, because it had a very unique voice to it. So then Take One Fish needed to be written to crystalise and articulate the words that I wrote in the first book making it more tangible and practical and offering more insight into what actually makes me really happy about fish, and how people can start interacting with fish a little bit more simply, and hopefully getting them to just forget as much as they can about the way that they work with fish at the moment.

RR: You’ve outlined 15 fish in the book, why these in particular?

JN: I chose those fish in particular, because they’re relative to Pacific and Atlantic waters, coral trout being the one exemption to that, being only really available in Pacific water. But, you know, snapper, sardines, herrings, mackerel, all of these fish are sort of visible to a lot of people that walk into a fish shop or a fish market.

RR: And the name of the book?

JN: The book really set out to try to express the potential of one single fish —- so that there was the ability to showcase a number of different methods of cookery and also applications towards the particular cut that went beyond just putting a fillet on the plate. I’m trying to use meat and meat cookery as my medium for introducing a very different approach to fish. And I’ve tried to use a fairly global approach to the book as well in the form of Peking coral trout, laksa, lasagna.

RR: The tuna lasagna recipe caught me off-guard — I thought people may have too many tainted tuna casserole memories.

RR: You mentioned the book’s mission is to get people beyond the fillet – why are we so focused on this specific cut?

JN: We’re probably speaking specifically here to the audience in the West — the UK, the US and Australia in particular — where we’re all in a privileged position where we can choose exactly what we want. And it’s an easier dinner — we’re all time poor, we all need to get dinner on the table. What I’m saying is that is we need to start thinking of it literally more like meat, like where we would go and purchase a whole chicken to get a couple of meals out of it, where we could firstly roast the legs for dinner, poach the breast for a sandwich, and then use the frame for a soup, the same can be said about a fish.

RR: Which brings us back to the lasagna recipe.

JN: Well, the new book suggests that if you bought the sinew and you bought the less than perfect cut [of tuna] then you could mince it and then start using it like you would beef mince — and that opens up a whole spectrum of opportunity. 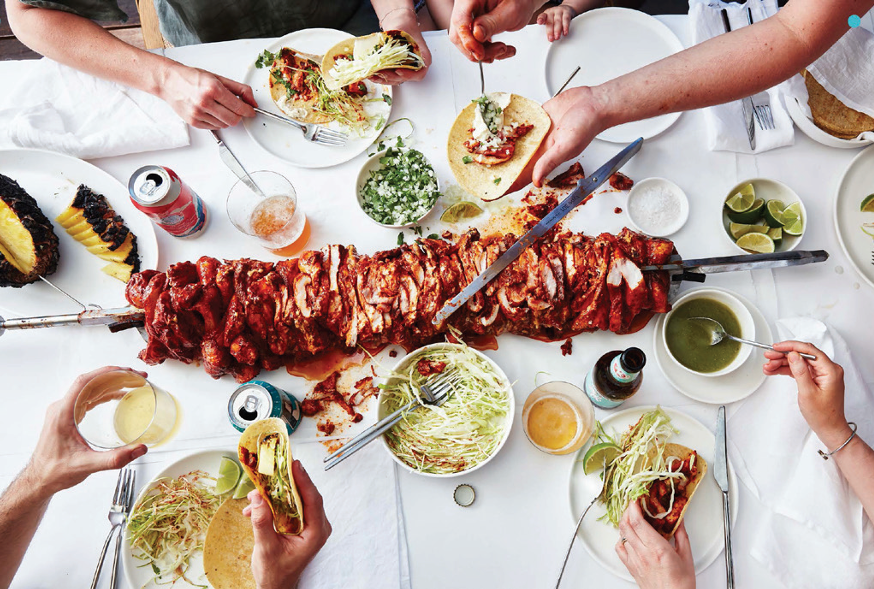 RR: Was there a favourite to develop — if you had to pick one?

JN: Utilising fish mince, I think, is a really kind of special idea and recipe in the book in particular, the lasagna and the kofta, that offer a pretty amazing solution for a lot of households.

RR: Have you seen a shift in people’s attitudes — fishmonger, restaurateur, consumer — since the release of the first book?

JN: If you can suggest to a fellow chef in the industry, or somebody who wants to buy good fish, that you can maximise the output of one single fish further so that you get a better return for it, then all of a sudden the intrigue sparks up. In terms of fishmongers and processors that work in marketplace around the world, there has been interest, in particular in the UK, with regards to the way that they’re handling and processing fish, especially with regards to wet handling, which really shouldn’t exist.

RR: What needs to change?

JN: The high turnover of fish getting wasted is crazy because of the wet handling, because of the poor capture techniques. It’s a really complex system, that if you put the handbrake on it and you said, “We need to do it this way,” then I feel like the world wouldn’t get their fish in a practical amount of time, and I think it’s at the very beginning of a very difficult conversation that kind of needs to happen. But right now we exist in a climate where quantity is celebrated over quality, and we’re continuing to take more and more fish out of the water and sell it for the lowest price and if they don’t get sold, then usually the shelf life on that is three to four days, and so then we’ve got such an extreme amount of wastage happening.

RR: Talk to us about Charcoal Fish — set to open in Sydney’s Rose Bay.

JN: The best way to explain Charcoal Fish is a chicken shop that you would traditionally see rotisserie chickens, beautiful displays of salads and vegetables, but substituting the chicken, obviously, I’m putting fish in its place. So championing Murray cod, one of our native Australian fish here from Aquna in Griffith [NSW] we’re using that as our chicken.
So the menu has been derived on that for Charcoal Fish out of the complete utilisation of that fish, so we’ve got 95% of the Murray Cod on that menu.

RR: And that will be purely takeaway?

JN: Once COVID restrictions lift we will have the opportunity to put in 26 seats, internal and external.

RR: How have you found dealing with the pandemic over the last year and a bit?

JN: The first [COVID wave] was challenging because we didn’t know what we were dealing with. Luckily, I had already started ‘Mr Niland at Home’ prior and we started running with that – meals that were 90% ready and needed 10% finishing at home.

RR: You also remodelled Saint Peter shortly after, what sparked that?
JN: Well, the lockdown gave me a good chance to evaluate how happy I was personally, because in the restaurant that we had, Saint Peter, at that time we were 34 seats and we were doing a lot of customers — doing about 80 or 90 people every service. The expectations around the restaurant had exceeded the size of room that we had and we were carrying a huge amount of staff. We kind of asked ourselves what we wanted Saint Peter to be, and so we stripped the restaurant out during lockdown as well, and then we reorientated the space so that it only sat 18 people. Spending the last almost year doing food in that style has been a really happy time for us all as a group.

RR: You touch on your own happiness there, how did COVID affect mental health throughout the industry?

JN: I think the hardest and biggest challenge to overcome in that situation for my friends in the industry that weren’t working at the time is the fact that you don’t have deadlines anymore. You don’t have a 6pm service to get ready for. Without that level of adrenaline going through your body at those certain times of day, then you really plateau. You get really flat and that’s when you probably start overthinking everything and then everything gets really heavy.

RR: Is mental health something you’ve further focused on since reopening.

JN: I think as a chef — if we don’t have a sense of purpose, then that’s when we don’t function very well. With regards to our team, for quite a few years now we’ve done a ‘four day on / three day off’ roster where the team only do 40 hours a week and they get three days off in a row. We close Sunday, Monday, Tuesday, so there’s that real consistency in terms of knowing your routine and you can plan, and that’s not something that I feel has been commonplace over the decades as a chef.

RR: So I take it no plans to make Saint Peter bigger or open an outpost in Melbourne?

JN: Saint Peter has turned into the business that requires my personal presence and creative application day in, day out – I still write the menu every service that we’re open. It’s a bit of a living organism that you have to keep kind of feeding. It potentially could become bigger as a restaurant in time, but for now, I wouldn’t open a Saint Peter overseas necessarily, because it’s a very challenging business to run at the standard that we run it right now.

Take One Fish is on sale from today via Mrniland.com & Hardiegrant.com/au Charcoal Fish is set to open for takeaway August 1. saintpeter.com.au ; charcoalfish.com