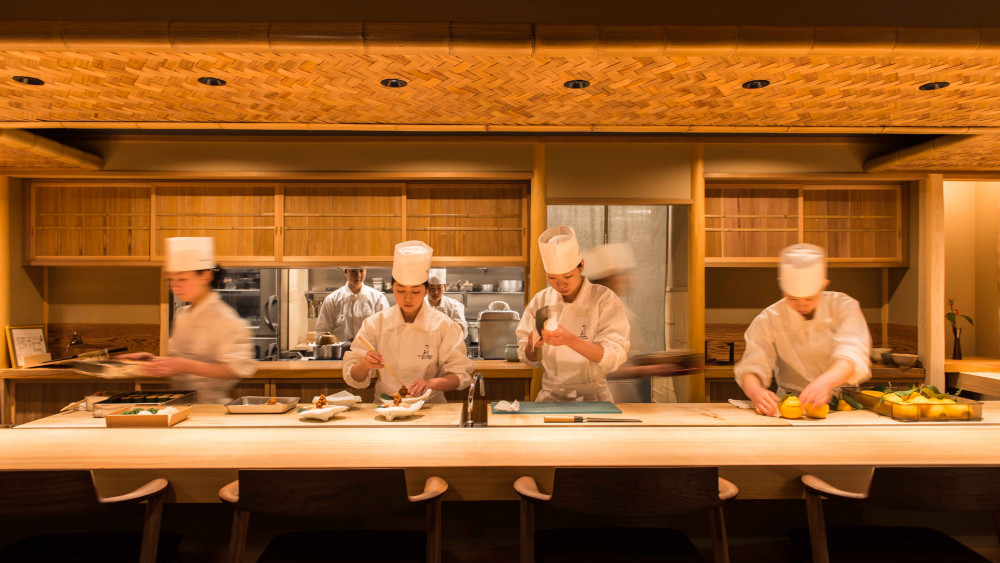 The revered art of kaiseki has long been a man’s world. The chefs at Tsurutokame want to change that.

It’s a few hours before Tsurutokame opens for the night, and the scene in the back of the house is intense. Seven chefs swarm the kaiseki restaurant in Tokyo’s upscale Ginza neighbourhood, gliding around their tight quarters like choreographed dancers, performing their prep work in near silence. With a steely determination, Yubako Kamohara leads the brigade, moving deftly among her staff. One moment she’s correcting a cook’s technique for slicing bonito sashimi; the next she’s helping another cook arrange the intricate fish-shaped ceramics that will contain the night’s first course. The constant furrow of her brow is a reminder that she’s carrying the heavy weight of expectation.

The pressure Kamohara is feeling goes well beyond creating an impeccable dinner service tonight. The 34-year-old head chef knows that scrutiny is following her every move because in Japan, the kitchens of kaiseki restaurants have long been a man’s world—until she came along. Kamohara is the first to lead an all-female team of kaiseki cooks, and she’s ready to show her country that she’s not the only woman up to the task.

Predictably, Kamohara’s path to Tsurutokame was neither short nor easy. It all started with Osamu Mikuni, a Tokyo chef who, along with his wife, Harumi, owns 11 restaurants in the Japanese capital. He had witnessed his industry’s overt sexism throughout his 52-year career and realized that change wasn’t coming anytime soon—unless he did something.

“I’ve seen a lot of talented women, but because the culinary world is very male-dominated, it’s hard for them to climb up the ladder and become front and centre,” Osamu says. “I started this restaurant as a mission to help achieve gender equality in the restaurant world.”

To make the biggest possible impact, he wanted women to take on kaiseki, the country’s most prestigious and artful cuisine. Kaiseki is more than just dinner: It’s the expression of time and nature through the flavour and representation of food. It’s a centuries-old art form where the order of courses tells a story about the seasons, where even the plates used to serve the food are carefully considered. “The visuality and performance struck me as very similar to Japanese theatre,” says Eric Rath, a University of Kansas history professor who focuses on Japan’s food culture. Kaiseki is a forerunner to modern tasting menus in fine-dining restaurants around the world, and it’s been especially hard for female chefs to break in. “There is a long tradition of women serving as chefs and owners of restaurants, but they’re not at the level of kaiseki,” says Rath, “but the patriarchal nature of the restaurant trade makes it difficult for them to advance in that career.”

The idea came easily to Osamu, but the talent took longer to find. He searched for years for a leader strong enough to handle the pressure of a kaiseki kitchen, until he, at last, discovered Kamohara working in one of his restaurants at a Tokyo department store in 2015. “She was very aggressive and positive, and her work style was energetic,” says Harumi. The only catch? She wasn’t a chef—not even a cook. But it didn’t matter to the Mikunis. “We were impressed. We felt this was the girl we wanted to lead the restaurant. We could teach her to cook.”

So the couple set about convincing Kamohara, who had also worked as a nutritionist, to leave her retail career behind and train for Tsurutokame. They quickly realized, however, that the traditional Japanese way of training kaiseki chefs—an excruciatingly long process that takes years—would not do. “It can take three years before a cook gets to grill fish,” Kamohara says. At that rate, the restaurant wouldn’t open for a decade. So the Mikunis put the scale of their business to good use, hiring the women and training them simultaneously by having them take shifts at all their restaurants for one year. The formula would have Tsurutokame opening its doors in December 2016.

Still, despite being the Mikunis’ chosen one, Kamohara says those early days weren’t all smooth sailing. In fact, it was practically a comedy of errors, this restaurant full of women where almost nothing seemed to go right. Rookie mistakes happened all the time, from jumbling the order of courses (a cardinal sin in kaiseki) to forgetting to send out a dish altogether. And then there was the stigma—and salacious rumours—of a legendary male chef grooming so many women for one restaurant. But eventually, things fell into place. “I could see Yubako growing mentally [and] physically, and her management skills improved,” says Harumi. “They were becoming one team—seven people looking in the same direction.”

That teamwork grew out of Osamu’s demanding yet holistic approach to guiding his staff. Because kaiseki is an art, he trained his artists beyond the mere craft of cooking. At the Mikunis’ headquarters across town, the couple regularly hosts the restaurant team for lessons in Japanese literature and ancient tea ceremonies. They sometimes gather around a piano to sing traditional songs, with a few J-pop hits sprinkled in for good measure.

Osamu says it’s all part of his approach; he pulls out a piece of paper and writes in Japanese three characters that represent “heart,” “technique” and “body.” “It comes down to balancing those three aspects in order to have a balanced soul,” he says. “Technique anyone can get—you just have to train. Heart comes with the lessons and tea ceremonies to develop their inner core. And you need to maintain your body as well. All over the world, chefs in Michelin restaurants have committed suicide, and that has to do, I believe, with overworking people.”

Kamohara, meanwhile, has her own aspirations for the restaurant to help achieve gender equality by pushing against another societal constraint. “Traditionally, women in Japan work until they’re about 25 and then quit to be full-time moms,” says Rath. “And then later when their children are old enough, they go back, but only work part-time.” Kamohara wants Tsurutokame to be a place where women can move quickly through the levels of kaiseki, training faster in the years before those life events throw a wrench into their careers—and offering a chance for them to rejoin the workforce once they’re ready to come back.

As Kamohara quietly oversees the pre-dinner prep, she acknowledges she’s still working to develop her voice as a chef. “I need to face directly toward the ingredients,” she says, sounding a lot like her poetic mentor. “For example, bonito fish comes in every day right now because it’s high season, but every day it’s different, so I need to use a different kind of cooking.”

Tonight, the bonito is perfect for sashimi, which Kamohara serves with shiso, ginger, chives and garlic marinated in soy sauce. At each of the 14 seats at Tsurutokame’s counter, diners young and old are perched around the chefs, watching as the team executes a traditional eight-course menu. Kamohara and crew maintain the steady focus of their pre-service prep, but with two of the groups in attendance celebrating birthdays, the kitchen can’t help but get swept up in the convivial atmosphere. As the night closes out, they all join in to belt out a song they rehearsed at choir practice the day before. Kamohara allows herself to smile for the first time all night, and the diners break into applause. But it’s not the song that’s getting the accolades; it’s the food—and the women behind it.