What do Pablo Escobar and the Yakuza have to do with the most exclusive beef in Australia?

Rockpool Bar & Grill has long been the port of call for customers after a high-quality cut of beef.

Its reputation across its Sydney, Melbourne and Perth outposts has seen the establishment form ties with one of the country’s most respected and renowned providores, David Blackmore. It is through Blackmore that Rockpool Bar & Grill receives exclusive Australian access to two exceedingly rare breeds of beef, the Rohne and Mishima.

We caught up with Rockpool’s executive chef Corey Costelloe to learn more about what makes these cuts so special.

Robb Report: So how did David Blackmore start supplying you this rare breed called ‘Rohne’?

Corey Costelloe: It was probably about two years ago that David messaged us and said he’s been experimenting in his semi-retirement with a few different breeds and is trying to come up with something that he thinks is going to eat well. He was calling it ‘Rohne’, so we got one, and my head chefs and I tried it and sort of said that it’s some of the best beef we’ve eaten. We rang David and said we’d like some more.

RR: I understand the breeds that make up the Rohne remain a mystery?

CC: Yeah, I mean the Blackmore family are pretty cagey with what they feed their animals, how they treat them and what they do. All we know is that there are four [breeds] of them combined. We’ve asked him [Blackmore] to tell us, but he said “Well, this is the breed. It’s called Rohne and I invented it.”

RR:  So you must have a lot of faith in the Blackmores?

CC: Well, yeah, we’re pretty close with the Blackmore family, and it goes back to when Neil [Perry] had it, so we had total faith in what they were doing and that they were going to be true to their word about delivering something outstanding. 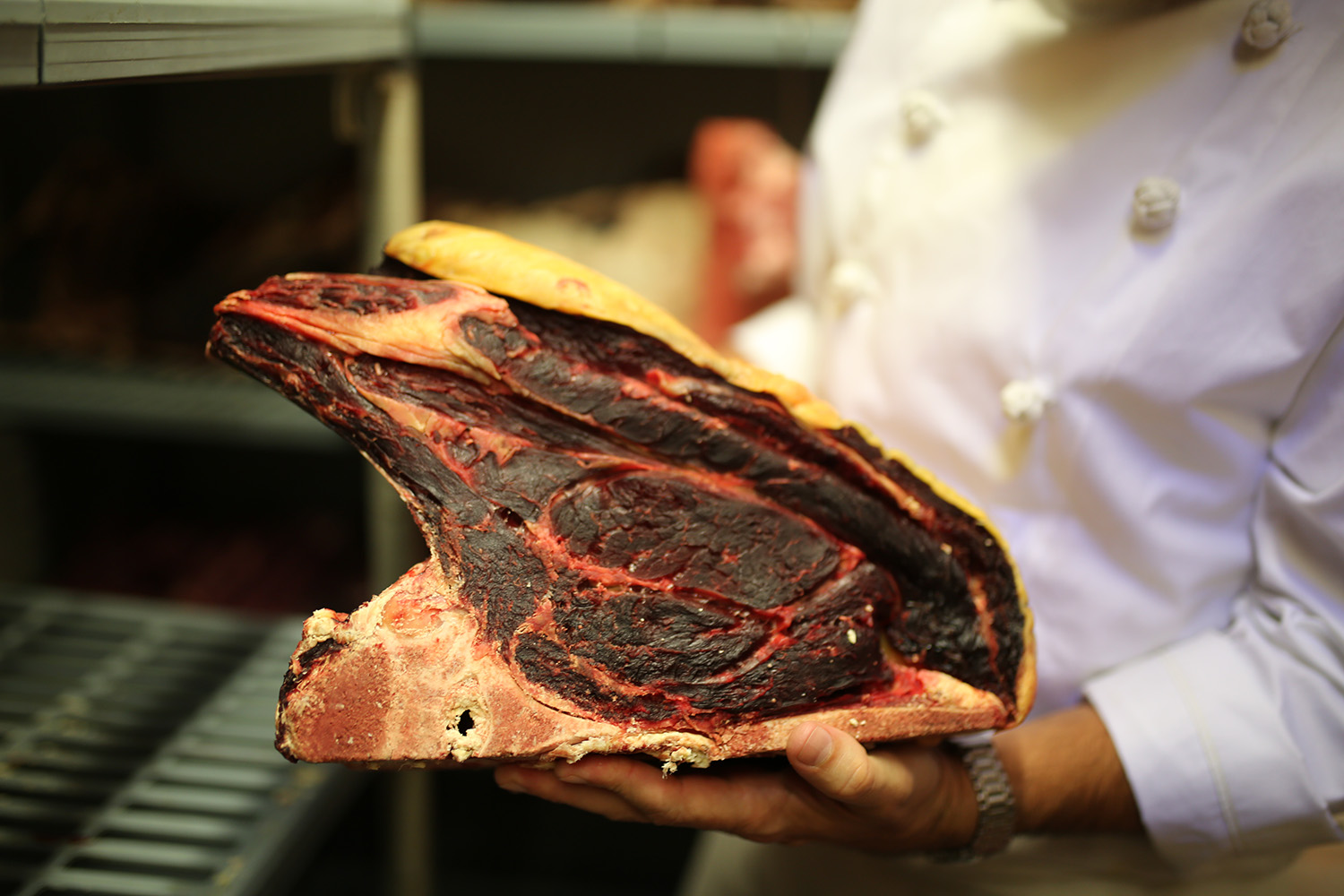 RR: So, what’s it to be the only establishment in Australia with this product?

CC: It’s pretty nice. I take it for granted a little bit. Yeah. I ate a piece of steak two days ago from it and I was like, “Wow, that’s right. It’s really good.” It’s outstanding, and the people that come in here are really appreciative of it.

RR: So, if I’m coming into Rockpool Bar & Grill, what’s the best cut I can have?

CC: Well, I mean, that’s like saying what’s the best car you could get? One person’s opinion will be different from another, but my opinion is the rib eye on the bone. It’s the granddaddy of all of them.

RR: And how much would one cost the customer?

RR: Right and talk to me about the Mishima steak – I understand that’s even rarer again, and Rockpool Bar & Grill has the exclusive use of that too?

CC: Yeah we do, and it’s even more expensive than the Rhone. If you order a rib eye on the bone, one of them is about $260 depending on how big it is and how big the animal is.

RR: And so what is so special about it that it commands such a price?

CC: Well, it’s not available anywhere outside of the island of Mishima in Japan, and even though Dave’s got it, it’s very rare and is generally only available in Japan through Mishima.

RR: So how did David Blackmore get it, my notes say he secured semen from the only Mishima bull ever to have left Japan and is carefully crossbreeding it?

CC: Yes, and the semen that he got from that bull was the one that he got from Pablo Escobar’s ranch in Colombia. When the US DEA went in and raided it [Pablo Escobar’s compound], they took the bull with them back to Texas and he happened to be there at the same time as the DEA took it to a cattle yard and said, “You guys, can you tell me a little bit about this?” And they found out and David happened to be there at the right place at the right time. So, the people on the Island of Mishima were not very happy that it got out, but the Yakuza from Japan were the ones that gave it to Pablo Escobar, because he loved eating beef and that’s how it ended up there.

RR: Do you or the team get nervous cooking such expensive steaks?

CC: There are so many little factors in cooking a steak that can make it overcook or undercook and if you’re not totally on your game, it’s a very easy thing to do. So, the guys get very nervous when they’re cooking the steaks like that.

RR: So how long do you have them before you sell out?

CC: Not long. I mean, because we break it down and we break down half an animal at a time, so you get 11 steaks out of one rib rack. You get six fillets, so we only put six fillets on the menu. So, we’ve got a table of 10 people and six of them order the fillets and they’re all gone, just for one table.

RR: When it’s in, how can one make sure they secure a steak?

CC: It’s very odd that we’ll have both of those, but at least one, either Mishima or Rohne will always be on our menu now across our bar and grill in Sydney and Perth.