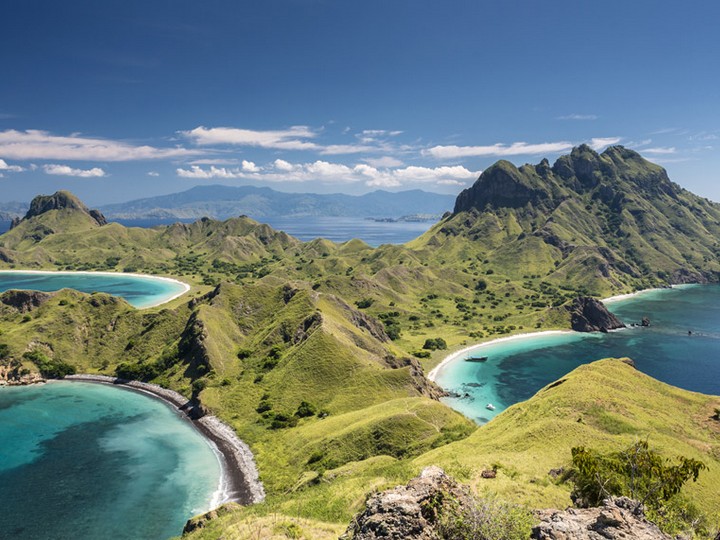 The Indonesian island that’s an emerging hotspot for divers

Komodo is only second to Raja Ampat as home of the one of the richest coral reefs in Indonesia. Don’t miss it before it’s lost.

By the time I’ve arrived at Labuan Bajo Komodo Airport, I’ve been awake and travelling for more than 12 hours. I’ve taken the fastest route from Singapore, which involved a connection flight via Bali, and truth be told, I’m wondering if I could have better used my time to fly to Australia or Eastern Europe.

I’m here to explore the 29 islands that make up Komodo National Park, and to experience the allure of Komodo. Even with transits and coordination involved, it doesn’t deter scuba divers from making their yearly pilgrimage to explore what this ‘underworld’ has to offer. After all, Komodo is only second to Raja Ampat, home of the one of the richest coral reefs in Indonesia. I’m spent, and thankful for the Rascal crew waiting for me at the airport with a cold towel. A short 10-minute drive later, I arrive at the jetty, and hop onto one of the two tenders, with Rascal in full sight. Built using teak and local ironwood, the gorgeous charter-only Phinisi (a traditional two-masted Indonesian sailing boat) is home to five over-water, ensuite cabins that spread across two levels. While it sleeps up to 10 adults, its small capacity matched by eight crew members including Gaz, the cruise director who hails from England. Rascal departs just before sunset, and I’m given a quick tour around. The 2.3-m high ceiling in the rooms keeps me from feeling claustrophobic, and the large windows allow ample sunlight through. The rooms are free of clutter, save for funky pineapple coat hooks, a poster and local craftwork. It’s hard to find a single fault on this boat, especially with its unpretentious décor that exudes a homey feel, rather than one of temporary haven.

Unfortunately, despite gulping a seasick tablet, ginger pills and ale, sea sickness sets in. I barely manage a few mouthfuls of dinner before I call it a night, allowing the rocking of the boat to lull me to sleep. I wake up to a view Gili Lawa Laut, its early-morning chill and pristine lake-like conditions evoking memories like that of New Zealand. There are no other boats in sight, and I’m off the grid.

While the others have just begun to wake up, Gaz and I set off for an adventure. Being the only certified diver on board, I’ve the honours of having Gaz as a personal guide. After joining the military at 17, and serving stints in Iraq and Afgahanistan, Gaz called it a day to be a dive instructor (he has been diving professionally for over 10 years), and has worked at Nihiwatu, Amanwana, and the Amanikan cruiser. “I left the military because I’m not a military man,” says Gaz. His past has clearly left a mark on him though, his instructions precise to the letter, especially when he insists the tender reverses three metres.

I’ve been told that Gaz is one of the most experienced dive guides one can find on charters, and he lives up to the statement. Upon descending, we drift with the current and spot a turtle and an eagle ray, which we would have most definitely missed if not for his judgement. We’re even spot four whitetip reef sharks lazing on the sea bed. While they’re tame enough to not retreat the minute they spot us, they swim away when we get too close for comfort.

Just before our third dive of the day, Gaz enthuses, “Three dives in a day, that’s the most I’ve dived in months.” It’s a pity Rascal isn’t used as a dive boat more often than it should. It’s size means you can dock at shallower waters, which are usually calmer and clearer. Currents can be strong in Komodo, and most of the time, we’re kicking continuously against it. Depending on the site, there isn’t much macro life, but therein lies the beauty of Komodo. Out in the deep blue are schools of fish, sharks and rays just making their rounds. An octopus decides to reveal itself, teasing as it changes colours in psychedelic ripples of silver and brown. Every dive brings about something new: spotting two giant trevallys, a slightly translucent yellow frogfish, a lone Giant Sweetlips and being circled by a school of what may be twinstripe fusiliers. Back on the boat, I make a beeline for the the outdoor sheltered dining area. Meals on Rascal are always an elaborate, ever-changing affair. Designed by The Good Food Brotherhood, the chef on board ensures I’ve a balanced diet of vegetables, complex carbs, and a mix of meats from Moroccan meatballs to beef rendang. My only grouse — if any at all — is that I’ve not yet had a fully-local meal.

The itinerary has been left to Gaz, and when we’re not cruising or diving, I take the chance to kayak and stand-up paddle board. On one of the days, I see a group of dolphins and give chase on a tender. When the sun’s more forgiving, I trek up Gili Lawa Laut to witness a gorgeous sunset.

On yet another day, I head to Komodo National Park’s pink beach. The beach gets its natural hue from red corals that have been washed ashore and disintegrated. Over the course of years, the colour has lightened, but is still visible up close. While Champagne picnics can be had on the beach — the crew went ahead to set up a gazebo with triangle floor cushions — I am content with digging my toes into the warm sand and inspecting the fine grains that glisten like rubellites.

A trip to Komodo isn’t complete without paying a visit to Komodo National Park, home ground of the dragons. Said to be one of the largest monitor lizards, they deliver venomous bites and patiently lurk around their victims, waiting for weeks while the victims succumb to their injuries. My trek ends on a high as I watch a dragon devour a boar’s severed head, its snout, face and tusks intact. While the stench is unbearable, there’s nothing like seeing a majestic beast feast on its prized possession. Back on land, I look at the beauty of Komodo through a different lens. Still waters to calm the soul, the lack of reception that disconnects me from the world, along with land and sea adventures that provide a daily dose of adrenaline.

Due to a miscalculation, I’ve only logged 199 dives, instead of the 200 as I was looking forward to. The good news is, Rascal will be sailing to Raja Ampat at the end of the year, so I know where I’ll be heading for my milestone dive.