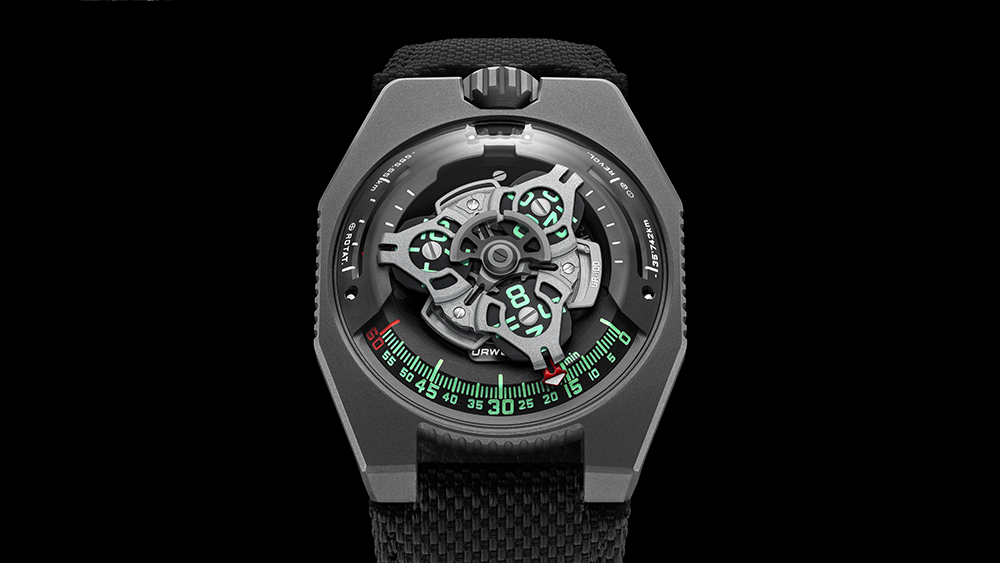 Act fast if you want to get your hands on one—only 25 will be made.

Since its inception in 1997, Urwerk has specialised in wildly futuristic timepieces that look like mini spaceships for the wrist. The UR-100 SpaceTime, available in a gunmetal version (approx. $76,000, limited to 25), encapsulates the brand’s unconventional approach to horology by tweaking its orbital-satellite mechanism with a pair of astronomical indications.

At 10 o’clock, a red-tipped pointer hand passes beneath a subsidiary dial that marks the distance a fixed point on Earth has moved through space, based on the average speed of rotation at the equator, which comes to 555 kilometres, every 20 minutes. The second display, at two o’clock, marks how far the planet has travelled in its orbit around the sun within that same time frame (that would be 35,740 kilometres).

“That’s the fascinating thing about time,” says Martin Frei, Urwerk’s co-founding partner and chief designer. “It has many qualities. But one quality that we know is the same as time is, in fact, space. When you look at the side of the watch, you will see the hand appears again to indicate the distance that we travelled around the axis of our planet in just 20 minutes.”

The SpaceTime is powered by the automatic Caliber 12.01 with a power reserve of 48 hours, a frequency of 4hz and an automatic winding rotor regulated by a flat turbine called the Windfäng or “air trap” that reduces shock to the rotor, as well as over-winding. It rotates 6 times for every rotation of the winding rotor.

The watch was released last September in Titanium and stainless steel versions. We hear those have already sold out and considering Urwerk makes only 150 watches per year, you can expect collectors are already vying for the gunmetal version.

While the watch has the design and space-related functions of an ultra-futuristic timepiece, it was, in fact, inspired by a 19th-century pendulum clock given to Urwerk founding partner Felix Baumgartner by his father. Our perception of time has, of course, changed wildly since then and the UR-100 reaches to the heavens to bring its wearer back down to earth. It’s a reminder that time and space aren’t fixed ideas but interconnected phenomena, which can appear drastically different with nothing more than a change in our perception.