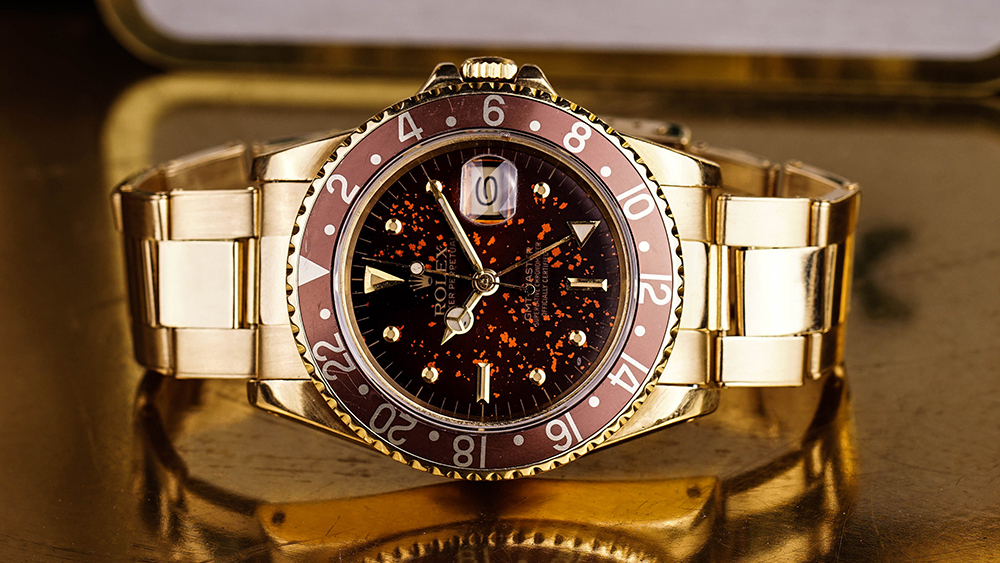 The Lava-Like Dial on This $58,000 Rolex GMT Master Is Driving Collectors Crazy

Some things just get better with age.

Vintage watch collectors used to avoid spotty patina on a dial. The preference for evenly distributed patina was usually based on the not-inaccurate belief that newly delineated shapes (spots) disrupt the original design. Further—and to put it bluntly—spots on a dial tend to look like something went wrong, and spots rarely speak as poetically as a nice even patina does.

That’s increasingly changing with collectors now seeking out dials with perfect, but happenstance, signs of age. Once in a while, a spotty patina develops horological poetry that no evenly faded dial can match. This is especially true when that patina happens to heighten the watch’s original aesthetics. Vintage watch dealers Craft and Tailored are currently offering just such a watch—a 1981 Rolex GMT Master Ref. 16785 in yellow gold with a brown bezel. They have nicknamed it the “Hot Lava,” but if you feel like going down a rabbit hole, head over to their Instagram (@craftandtailored) to join in on the naming contest and see some of the rather funny suggestions from followers.

The warm tones of the original watch and bracelet have provided the perfect context for this unique tropical dial. It’s easy to imagine that the same dial on a steel GMT Master with, say, a Pepsi bezel would not have been nearly as compelling—perhaps even off-putting. Rolex’s yellow gold from this era is on the warm side, and the slightly faded brown aluminium bezel insert frames the dial of this Hot Lava GMT as if by design. We can, however, only credit mother nature for the stunning result.

The Rolex GMT was launched in 1954 for Pan Am’s new class of intercontinental pilots. The GMT complication allowed these pilots a simple and effective way to track two time zones, a crucial function for anyone leaping across time zones every day. The fourth “GMT hand” tracks the same time as the main time, but makes one rotation every 24 hours. By rotating the bidirectional 24-hour bezel, pilots could easily align the 24-hour hand to a second-time zone.

The Hot Lava is an example of the Rolex Ref. 16758, which debuted in 1980 and ran until 1988. As such, this watch runs on the Caliber 3075, which includes a quick set date and, importantly, will be more easily serviced than its predecessors as parts are more readily available. The watch also incorporates a sapphire crystal (Rolex being an early adopter) as well as a clicking mechanism on the bezel (which wasn’t offered on steel GMT Masters until much later).

According to Craft and Tailored, the riveted bracelet is still quite tight, and close-up photographs indicate that the watch has either not been polished or was polished conservatively by an expert. Either way, the sharpness of the case is going to be a very attractive feature for collectors. The watch has recently been fully serviced.