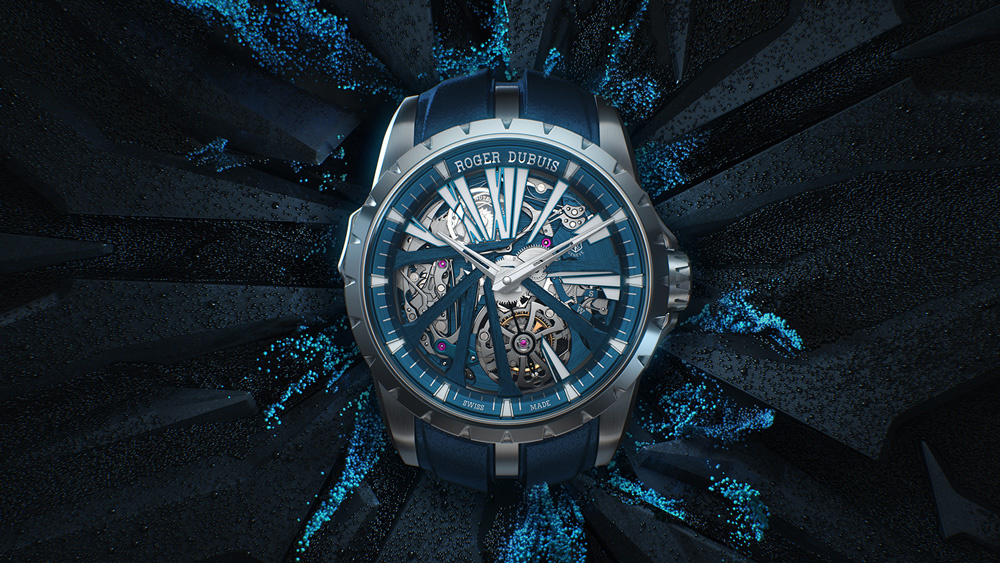 The unique piece is noteworthy for reasons that go way beyond its radical looks.

The new Excalibur Diabolus in Machina from Geneva-based watchmaker Roger Dubuis is noteworthy for reasons that go way beyond its radical looks.

The timepiece combines a single flying tourbillon with one of watchmaking’s most sophisticated and age-old complications, the minute repeater. It’s also encased in a type of cobalt chrome—called CarTech Micro-Melt BioDur CCMTM—that comes in a shade best described as electric aquamarine. And finally, it’s priced at a cool $887,000.

But the rule-breaking doesn’t end there: The watch—a pièce unique—is named after the tune played by the minute repeater: Diabolus in Musica, a Latin term meaning “The Devil in Music.” The tritone—a musical interval composed of three whole tones—was outlawed in medieval times, supposedly because it conjured the devil.

“That said, it’s been used quite extensively in music as a way to move between good sounds,” Roger Dubuis CEO Nicole Andreatta said during a Zoom press conference to introduce the timepieces the brand unveiled at Watchesandwonders.com on April 25.

“For example, it was used by Black Sabbath and Pearl Jam,” he added. “And it’s been used by The Simpsons in their opening music. Something pretty unusual. Wagner used this kind of sound to represent forbidden love and we always like something that’s forbidden.”

The 45mm skeletonised timepiece exemplifies Roger Dubuis’ penchant for juxtaposing classic complications and cutting-edge aesthetics, something of a calling card for the brand. In the case of the Excalibur Diabolus in Machina, its ultra-contemporary packaging is more, however, than a bold attempt to stand out from the pack. Cobalt chrome is purported to have acoustic qualities that allow sound to disperse perfectly and harmoniously. And unlike traditional minute repeaters, which require constant tuning, this example produces a harmonious and replicable sound, no futzing required.

“We used cobalt chrome to make the elements of the gong so you don’t need to tune the gongs,” Andreatta said. “The sound is achieved through geometry and the shape of the gongs themselves.”

Alas, buyers interested in acquiring the Excalibur Diabolus in Machina will have to try their luck on the secondary market.

“We already have a very happy customer who acquired this timepiece,” Andreatta said at the close of the Zoom session. “It’s gone.”