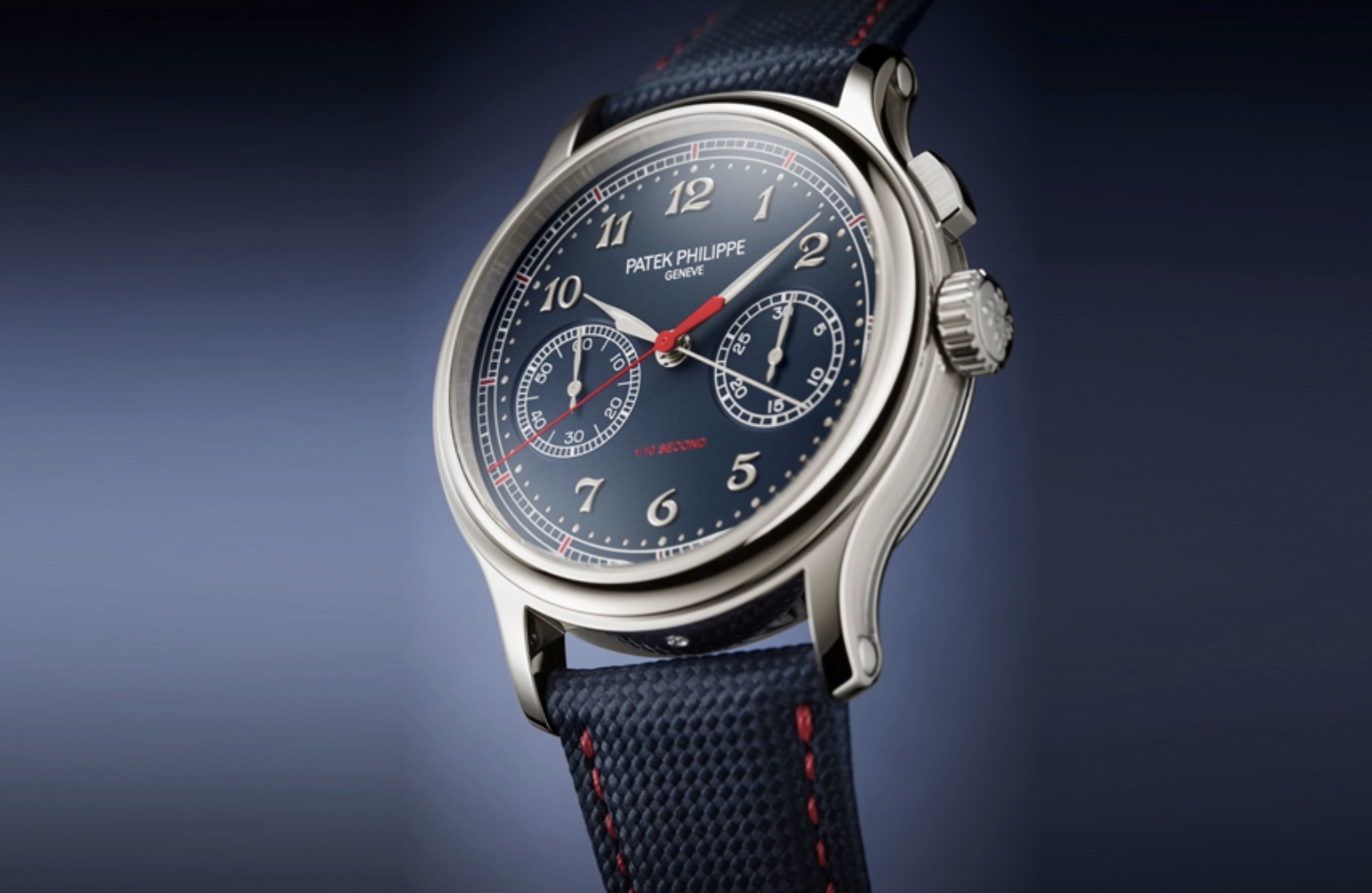 Watches and Wonders, the world’s largest tradeshow for timepieces, just ended. But Patek Philippe, which launched 12 new timepieces during the event, wasn’t done with its new releases.

On Wednesday, the Swiss watchmaker launched a sporty new high-performance grand complication, the 1/10th Second Monopusher Chronograph. The watch, Ref. 5470P-001, marks the first time the company has created a chronograph that can measure and display tenths of a second in a wristwatch and it comes with a whopping 31 patents, seven of which are exclusive to this reference. The manually-wound Calibre CH29-535 PS 1/10 chronograph movement features a column-wheel control, a horizontal dual-clutch with wheels and an instantaneous 30-minute counter, a 10ths-of-a-second module for measurements of the chronograph’s sweep hand and a small seconds indicator.

“We have been working altogether,” said Patek Philippe president Thierry Stern in a broadcast aired Wednesday morning. “The first part, of course, which was the most important was the movement. It’s not always easy to create a wristwatch with so many components and so much difficulty.” He added that the idea for the piece began as far back as 10 years ago when the company was thinking about how it could improve its CHR 29-535 PS split-seconds chronograph movement (found in all hand-wound chronographs at the company, with or without additional complications), first introduced in 2009, on which the new calibre is based. “We couldn’t do it at the time because the technology didn’t allow us to have a piece that was thin enough,” said Stern. The idea was that it not only had to be a technical achievement but, per Patek Philippe standards, it also had to look exceptional on the wrist. 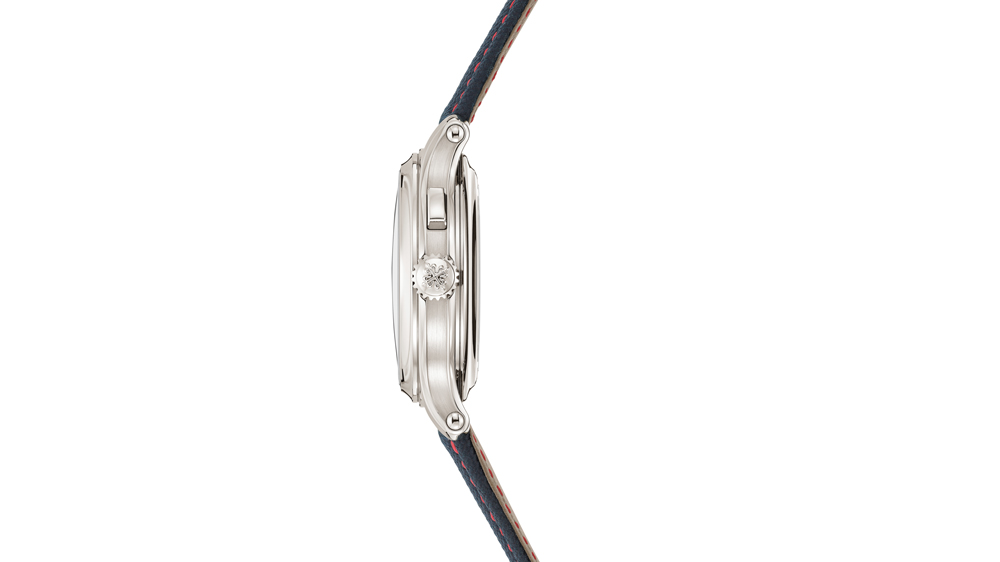 Improvements were plentiful. The split-seconds mechanism was replaced by the indication measure 10ths of a second. The frequency was increased from 4Hz to 5Hz, a requirement to display the ultra-accurate new measurement. “We have equipped [the base movement] with the Oscillomax, previously developed within our advanced research department for ref 5550P,” said Philip Barat, head of Patek Philippe’s watch development during the broadcast. “The Oscillomax consists of the Pulsomax escapement, the Gyromax balance and the Spiromax balance spring, all made of Silinvar and of Silinvar and gold for the Gyromax.” 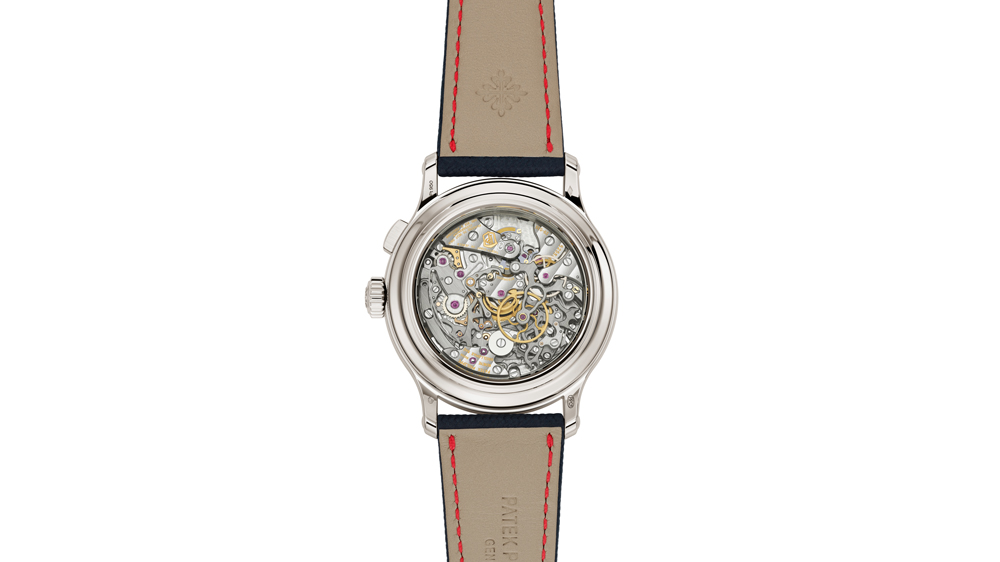 The Oscillomax, developed in 2011, is a high-tech regulator mechanism boasting 17 patents, which enables a high rate of accuracy with a maximum deviation of -3/+2 seconds per day despite the elevated energy consumption of the movement. This marks the first time since the introduction of the Ref. 5550P in 2011, that the Oscillomax will be used for a timepiece in the current collection. The Oscillomax operates with a balance spring with a patented terminal curve called the Spiromx and an escapement with a lever and escape wheel, known as the Pulsomax, and an adjustable mass balance wheel, a.k.a. the Gyromax. They are all made from a derivative of silicon, called Silinvar, which is known for being lightweight, rugged and antimagnetic.

The list of complicated achievements is nearly endless. The movement consists of two superimposed chronograph mechanisms—a chronograph of this nature, by the way, can be as challenging to conceive as horology’s most lauded complication, the minute repeater—which required the development of 54 components for the 10th of a second mechanism alone. (The superimposing of the chronograph mechanisms is essentially a space saver to keep the piece thin per Stern’s standards.) The indication required a specific gear train in order to ensure the fluidity of its movement and the reliability of its timekeeping on the wrist. A pinion for the 10th of a second mechanism has micro-toothing that controls the correct start of the time measurement when the chronograph is activated, while a driving wheel aids the smooth movement of the hand. 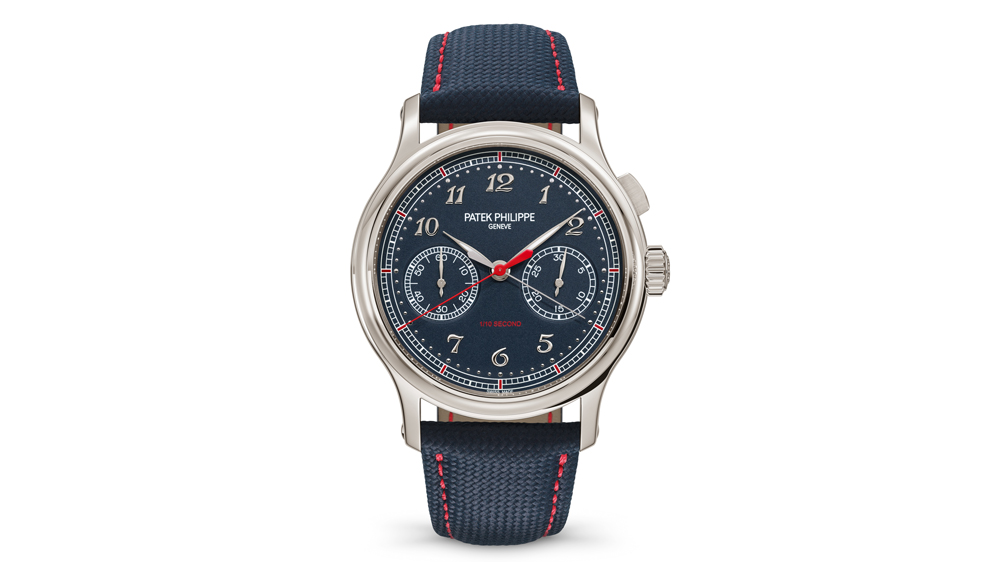 While these details will certainly appeal to collectors who appreciate technical achievements in a movement—a focus for Stern, who is keen on flexing the company’s know-how in the age of the Nautilus craze—it is surprisingly, simple to read despite its very challenging engineering (although you might need a magnifying glass to read the minute segments). When the two sweep hands are activated via the pusher at 2 o’clock, the red 10th of a second hand turns around the dial 10 times faster than the rhodium sandblasted steel seconds hand. When the latter is stopped, it can be read via the dotted bead markers around the circumference (as pictured, it is indicating 20 seconds). The red hand is measured by the white markers segmented by 12 red sectors (the red sectors indicate a full second, while the white markers indicated 10ths of a second). As pictured, the red hand is indicating that a full 10 tenths of a second has been reached at the red line. If the red hand was positioned one increment further it would read an additional 1/10th of a second. The hour and minutes are, of course, traditionally displayed by two 18-karat white gold hands (indicating 10:09 as pictured), while the chronograph counters are shown in a snailed small seconds at 9 o’clock and snailed 30-minute chronograph counter at 3 o’clock. The crown has two positions: the first for winding the movement and the second for setting the time.

To drive home the message that this is no ordinary sports watch, Patek Philippe chose to encase the Ref. 5470P in platinum and, as such, like all other Patek Philippe timepieces in the elite metal, it comes with a diamond on the rim of the case at 6 o’clock. The case, which was inspired by the design of the Ref. 5370, comes with recessed and satin-finished flanks with lugs adorned with decorative cabochon. The dial comes in blue lacquer topped off with a slightly domed sapphire crystal. It is fitted with a navy-blue calfskin strap with an embossed fabric pattern, red stitching and a platinum foldover clasp.

The price is, naturally, upon request.

The 7 Patents Exclusive to the Patek Philippe Ref. 5470P:

This assures simple, swift, and safe legibility of seconds and fractions of a second.

Notch in the barrel arbor

The notch reduces the tension exerted by the spring hook while the mainspring is being wound and allows a smaller diameter of the barrel arbor, increasing the energy stored in the mainspring by further spring coils.

Designed on two levels (an upper wheel with flexible spokes and a lower one with rigid spokes), it allows the creation of an anti-backlash wheel that is compact and consumes little energy.

In the event of a shock, this system securely holds the clutch rocker of the operating chronograph mechanism to prevent disruptions of the ongoing short-time measurement.

This system utilizes the acceleration forces of shocks on the watch to keep the components of a mechanism in the desired position and thus to assure correct functionality.

Surface primer for the silicon hand

This improves the adhesion of lacquer on a silicon-oxide surface (Silinvar).