Although Patek Philippe dropped four new Nautilus models last week, CEO Thierry Stern insists that while the model is outstandingly successful (although he admits he still doesn’t know why), it is not the main focus for the brand. “I could end it myself, if I wanted to quit the Nautilus,” he told a select group of journalists in a Q&A session Monday morning. That’s not to say he will, but he conceded that he discontinued the 5711/1A-010 earlier this year because it was, “becoming too dangerous.” By that he means, too hyped: Prices have soared stratospherically on the secondary market. In response, Patek simply upped the ante on one of its house specialties: the perpetual calendar.

The marquee new release is the Ref. 5236P, which highlights the brand’s expertise and R&D by introducing its first linear perpetual calendar that reads the day, date and month in one line. It’s not only a statement about the company’s direction, according to Stern, but it also links its past to its present. Based on a museum pocket watch from 1972, this version for a wristwatch had been one of his father’s ambitions, Stern revealed, but, funnily enough, he didn’t have the time. “I think it’s a beautiful combination of the past with this fantastic way to read the date and the new design of the dial in this blue colour and platinum case,” said Stern. “It’s a very nice mix between two generations of the Stern family.”

However, he says the ultimate goal is to raise up all of its collections. To that end, Patek Philippe has also delivered an Annual Calendar in steel, a new Calatrava with a larger case size and power reserve, as well as Clous de Paris guilloché on the bezel, and a simple but stunning new women’s watch with a navy guilloché pattern and new self-winding movement with a slightly enlarged dial. 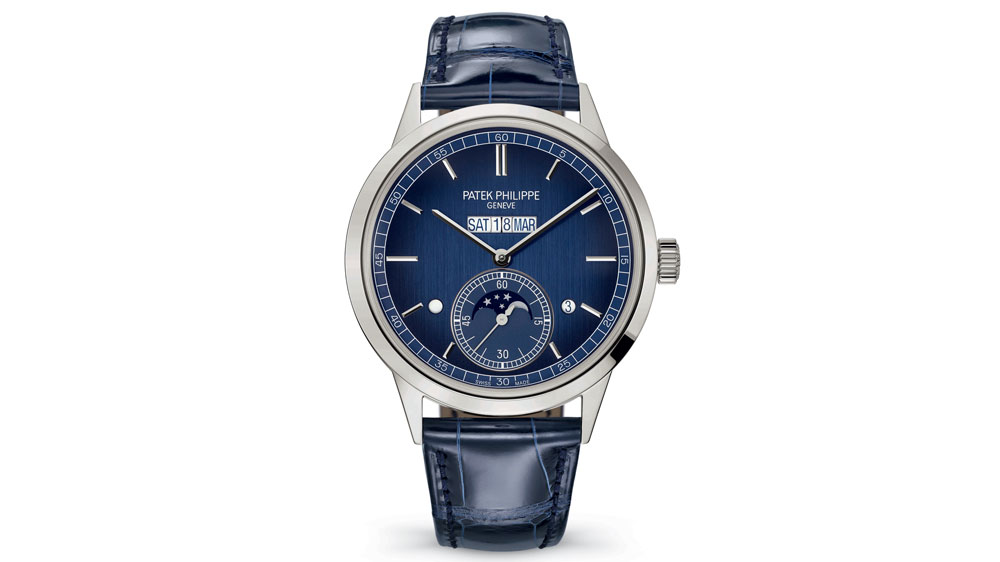 Patek Philippe made the first commercial perpetual calendar wristwatch in 1925, more than 150 years after Thomas Mudge invented it for a pocket watch in 1762. Naturally, it’s been a house specialty ever since. So it’s big news whenever the brand decides to undo its buttons and put a new notch in its belt with an entirely new version. This is the company’s first in-line perpetual calendar in a wristwatch. That means you can read the day, date and month in one single line at 12 o’clock. It’s not, however, the first time the brand has created this kind of movement: It created several pocket watches with the function for the American market. The 1972 No. P-1450 pocket watch, on which this new piece was based, also features a linear reading of the perpetual calendar functions which is read in the American standard of month, date and day, while the 5236P tells time the European way in order of day, date, month.

Seems simple enough, right? Not entirely. It took almost half a century to release the function in a wristwatch because it not only includes an entirely new movement (involving three patents), but also required the creation of 600 different bearings, milling cutters, chamfering tools and keys for the production of its parts. On top of that, 80 different tools were needed for assembly.

The challenge of converting this function from pocket watch to wristwatch was size. Surprisingly, the pocket-watch linear perpetual calendar was too small for the wristwatch and needed to be enlarged. To overcome the problem and to make sure the display was prominent enough, Patek designed two date discs (one for the tens and one for the units) because a single disc with 31 numerals would have made for a smaller reading. In total, there are four discs (two for the date, one each for the month and day) that operate in a line and turn independently to reduce friction and the use of energy, a feat that required 118 additional components. Increasing its capacity for energy mandated the increase of the size of the barrels by 20%, which also dictated the use of a platinum rotor (which adds more weight for inertia) instead of gold. It also allowed for an increase in frequency from 3.2 hz to 4 hz for better accuracy. 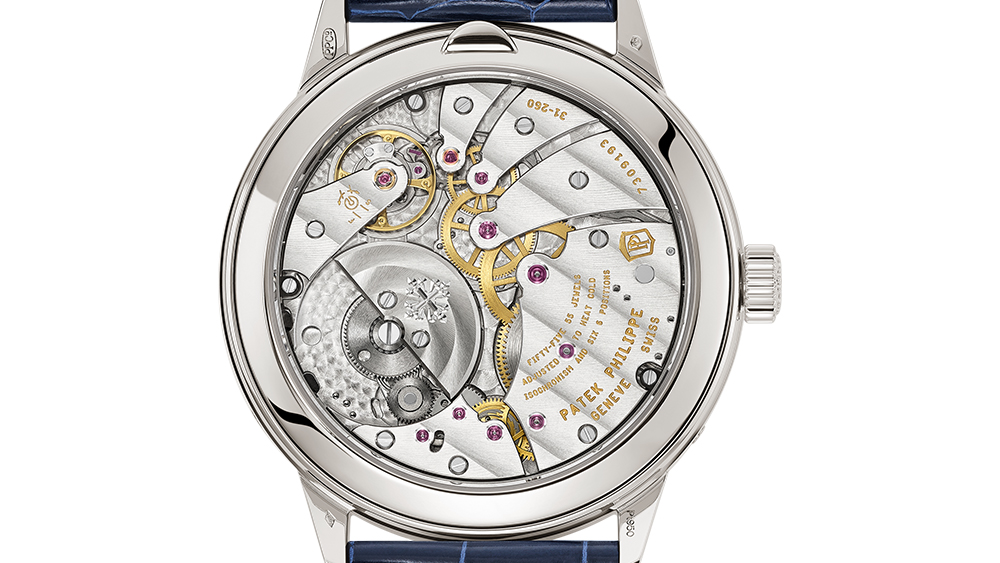 All of this was achieved in a movement that measures just 34 mm by 5.8 mm (the base calibre is 2.6 mm-thick and the perpetual calendar is 3.2 mm thick), totalling 205 components for the base movement and 298 for the perpetual calendar for a total of 503 parts. And while it’s totally new, it was partially inspired by the 2011 Ref. 5235 Annual Calendar Regulator, which, because of a recessed mini rotor, allowed for an extremely thin self-winding movement with subsidiary seconds at 6 o’clock.

Needless to say, this is an ultra-complicated piece despite its seemingly simple layout and design. As such, for serious Patek Philippe collectors, who either already have a Nautilus or prefer not to follow the lust of the masses, this is instantly the must-have model of the year (so far at least). 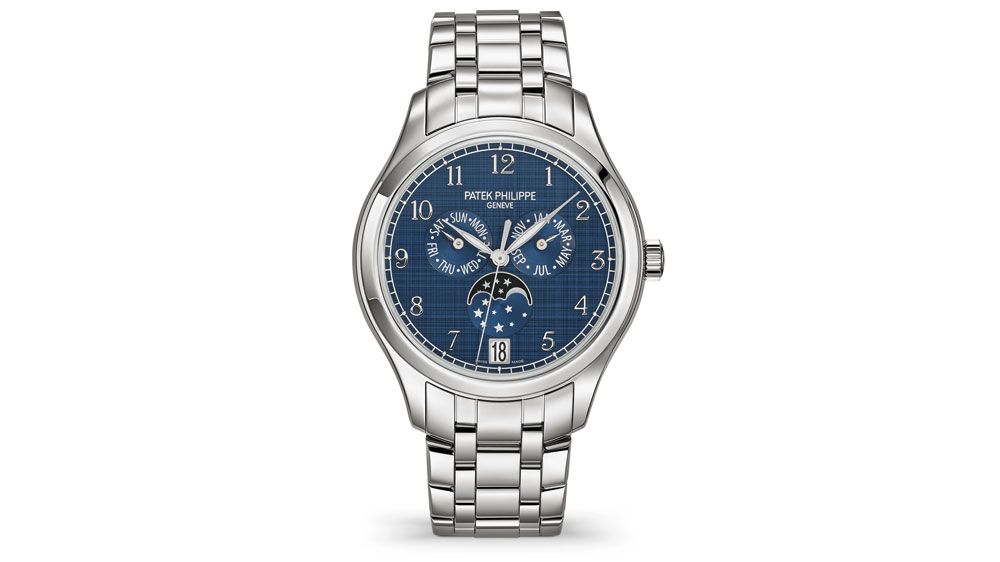 A new Annual Calendar in steel—that’s the big news here. First patented in 1996, this watch’s function requires only one manual correction per year with the day indicated in a subsidiary dial between 9 and 10 o’clock and the month between 2 and 3 o’clock. The date and moon phase are positioned at 6 o’clock. Previously, this annual calendar had only been available in gold and platinum. Now in steel and measuring 38 mm, it’s arguably more versatile in a less precious alloy and sized to fit just about every wrist. It’s topped off with a beautiful blue dial with horizontal and vertical satin finishes inspired by the nuances of Shantung silk.

For those that can’t get their hands on the more elite perpetual calendar above, this is a rather handsome compromise. 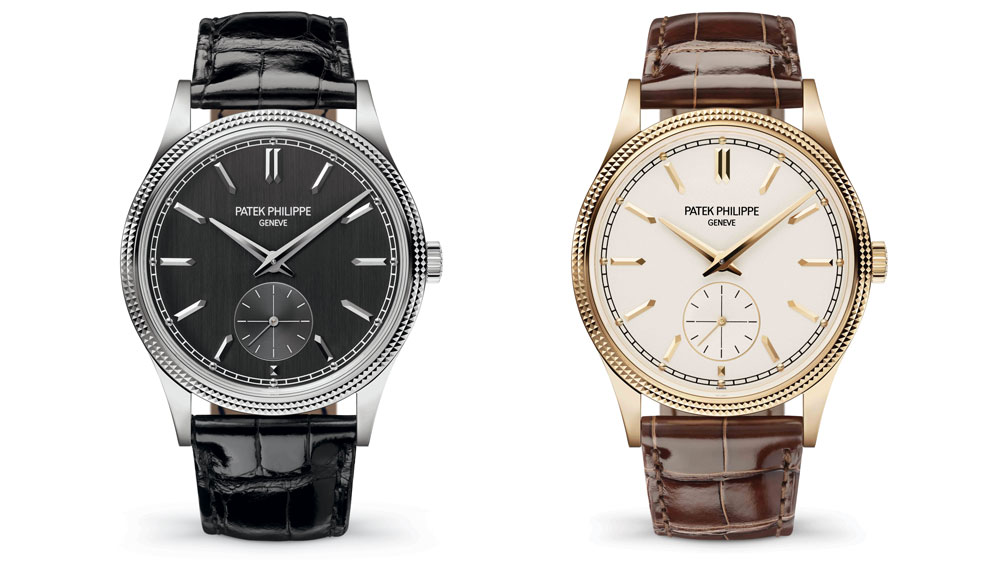 The Calatrava has long been the gateway drug to Patek Philippe addiction and the two new souped-up models that debuted today won’t make it any easier to resist that particular vice. New white-gold and rose-gold iterations now come dressed in Clous de Paris guilloched bezels adding some subtle pizazz to the otherwise straightforward time-only pieces. Earlier versions of the Calatrava that also feature this special touch have become increasingly coveted. Produced for over 20 years, those came with a white dial with black lacquered Roman numerals, while today’s version is now outfitted in a charcoal dial with a vertical satin finish and applied white gold hour markers, or a silvery dial with a grained finish and applied rose-gold markers—a cleaner take sans numerals. It is powered by the calibre 30-255 PS, which has 65 hours of power reserve (long enough to last you through a weekend without winding) and it features a stop-seconds function so it can be set to the correct time within one second of accuracy. The dials have also been slightly enlarged to 39 mm, while still maintaining a slim profile, for those that want a touch more emphasis on their wrist. 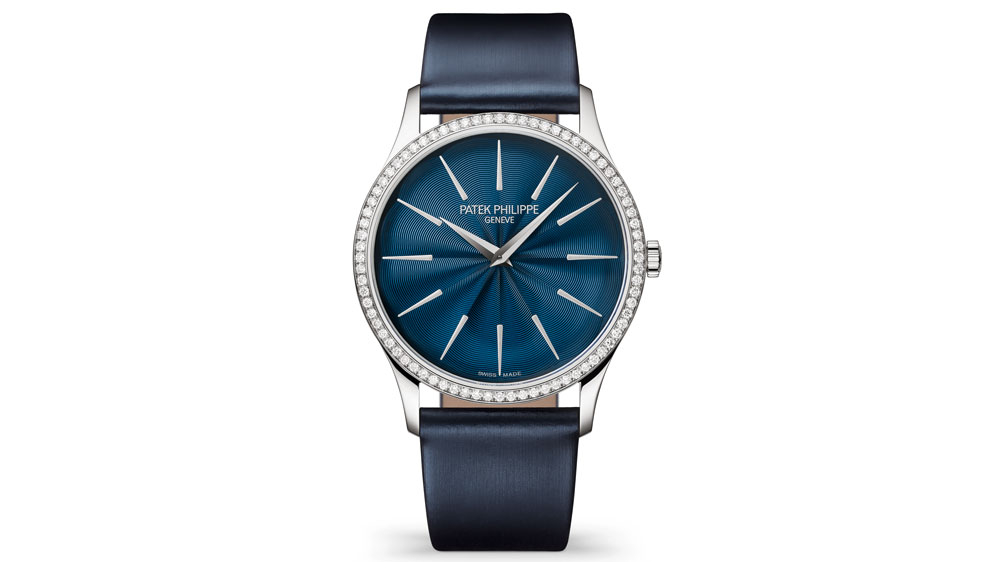 This elegant and simple time-only watch is billed as a ladies’ timepiece—and even with a slightly enlarged case size at 35 mm (previous iterations, launched in 2009, came in 33 mm) it may still mostly appeal to women—however it’s unisex enough in design that it could easily be worn by anyone that prefers a smaller watch. It now comes with a new self-winding calibre 240 movement (as opposed to the calibre 215 manual-winding movement of its predecessor) with a recessed 22-carat gold minirotor, visible through the sapphire crystal caseback. Stern explained that while 20% of the company’s client base enjoys the touch of manually-winding a movement, he wanted something that would appeal to a broader audience—an piece that winds itself with the movement of the wrist.

On the surface is a striking navy guilloché dial with concentric waves that have been coated in translucent matching lacquer. The picture above barely does the effect justice. Visually, it creates a fan-like pattern that pops with the movement of the wrist as it catches the light. It comes surrounded by approximately 0.52 carats of 76 flawless Top Wesselton brilliant-cut diamonds for extra sparkle.