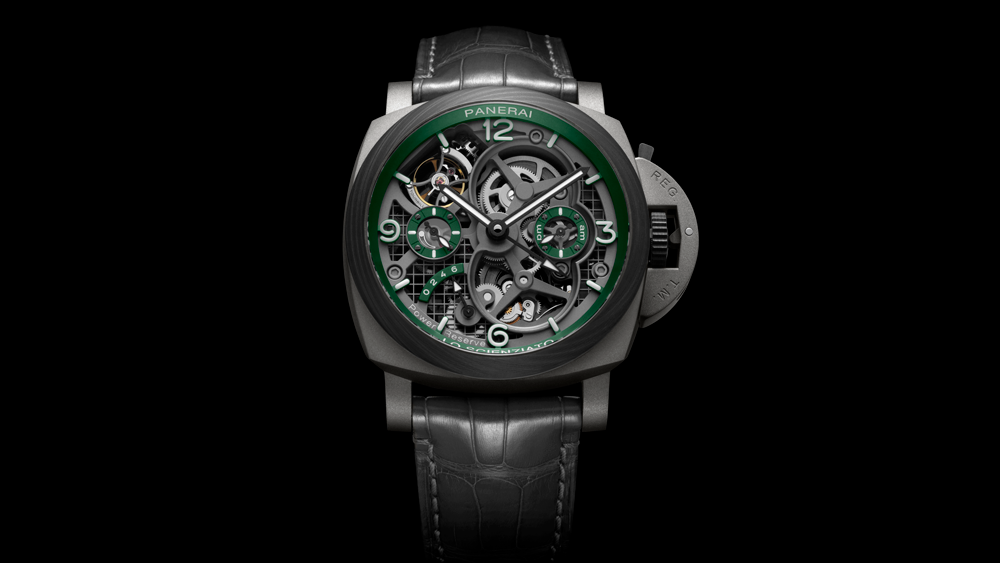 The watchmaker used laser printing to develop the case for a material lighter than traditional titanium.

Panerai has come out with a new version of its Lo Scienziato Luminor 1950 Tourbillon GMT Titanio 47mm. The new PAM 768, has a green flange, along with green-rimmed subdials for the small seconds and day/night indicators and a green accented arc on the power reserve indicator, which is new to this edition. The power reserve on the previous model was located on the case-back. Either way, the indicator is important because it draws attention to the fact that the watch has a 144-hour power reserve (6 days), thanks to three stacked mainspring barrels.

The movement is the hand-wound P.2005/T Caliber, Panerai’s in-house patented tourbillion, and one of the most contemporary applications of this mechanism. Most of the components are made of titanium rather than brass, so this, and the fact that it is open-worked, makes the Lo Scienziato Luminor 1950 one of the lightest three-barrel, 47mm tourbillons out there.  The green flange is made of carbotech, Panerai’s proprietary carbon-based material that is lighter than titanium, yet tougher than steel.

The case material, however, is what sets this watch apart from the rest. The first version of the Lo Scienziato Luminor 1950 Tourbillon GMT Titanio 47mm, the PAM 578, emerged from Panerai’s high-tech Laboratorio di Idee (laboratory of ideas) in 2016. (Another version of the model, PAM 767, came out in 2018, with a deep blue flange and strap stitching to match.) Not only was it complicated, with an inclined tourbillon and a GMT second time zone function, but it was also the first watch with case made using 3-D printing, a technology usually reserved for prototypes.

The method is called direct metal laser sintering, which works by printing the case, layer by layer using a fibre optic laser with grade 5 titanium. The result is a case that comes out 40 per cent lighter than traditional titanium, which goes a long way to making this large, 47mm watch more wearable, especially considering the added bulk of the massive crown protector that is signature to the collection. The numeral font, hand design and case shape also identify it as Luminor. And while this is certainly the most unusual Luminor in the collection, it also conforms to the contemporary aesthetic of the brand in general.

Panerai is, and always has been a sports watch, so skeletonising a movement in the traditional way with scrolling and engraving would have been contrary to the spirit of the brand. Here, it is open-worked in more of a steampunk style, with the muted grey of titanium components and a base plate cut into a grid, like a mesh fence. Even the tourbillon is unconventional. It runs for 30 seconds rather than the usual one-minute rotation, and it is angled perpendicular to rather than flush with the axis on which it oscillates. Panerai says positioning the tourbillon at a 90-degree angle helps it to do its job better, which is to compensate for the effects of gravity on the escapement.