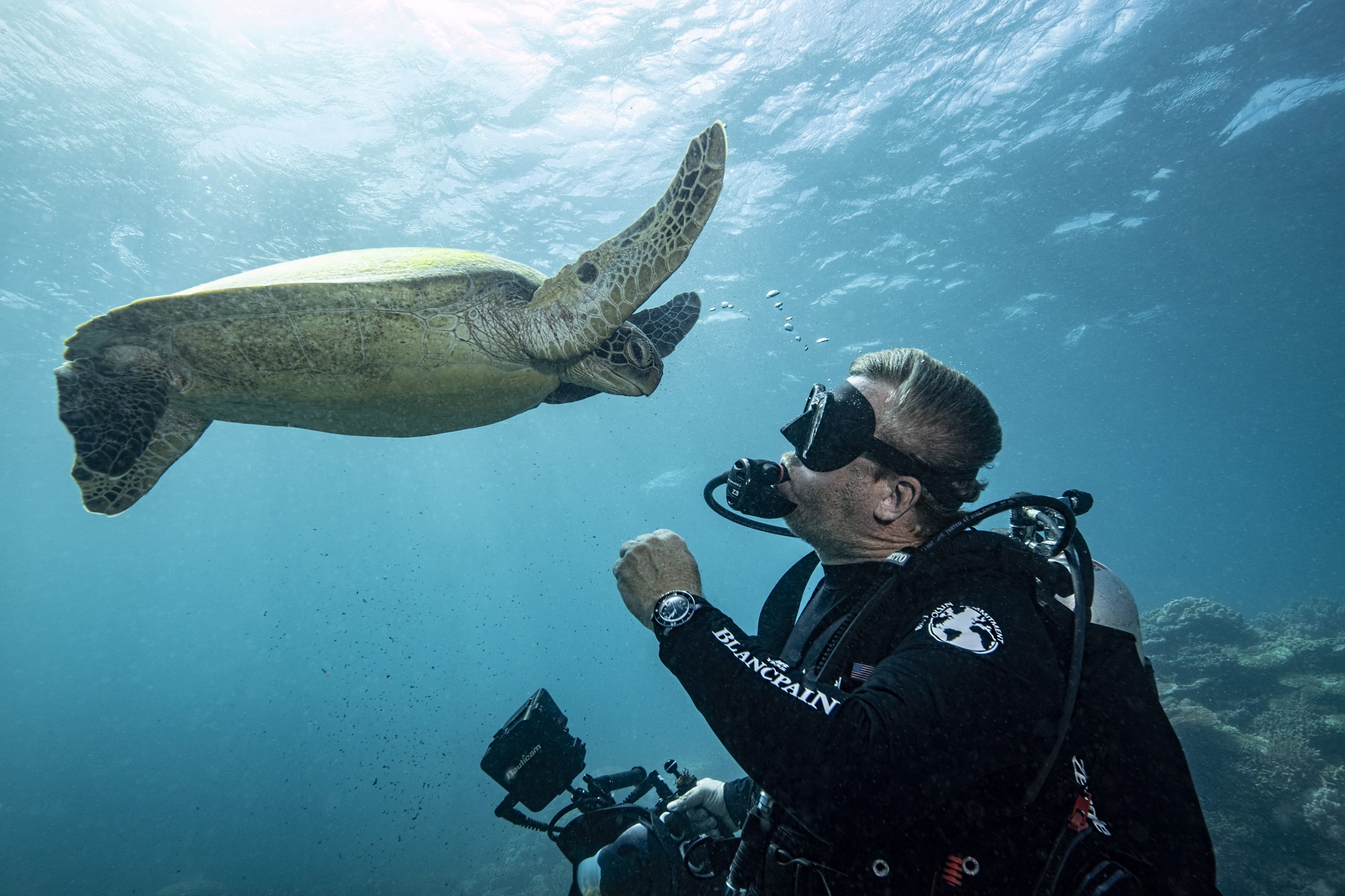 Making Time For The Reef

A swirling, kaleidoscopic tableau of colour and coral. Underwater visions of angular, flamboyant, even famous fish (looking at you, Nemo), and the muffled sounds that cocoon the exploration of warm tropical waters. It’s other-worldly, this section of Far North Queensland. Wondrous and transportive.

At least that’s what one still envisions of the Great Barrier Reef. The reality is sadly opposed and devoid of such splendour—reefs are arguably decimated due to the increased frequency of coral bleaching, a loss of marine life due to warming waters and the volume of plastics infiltrating already fragile habitats. 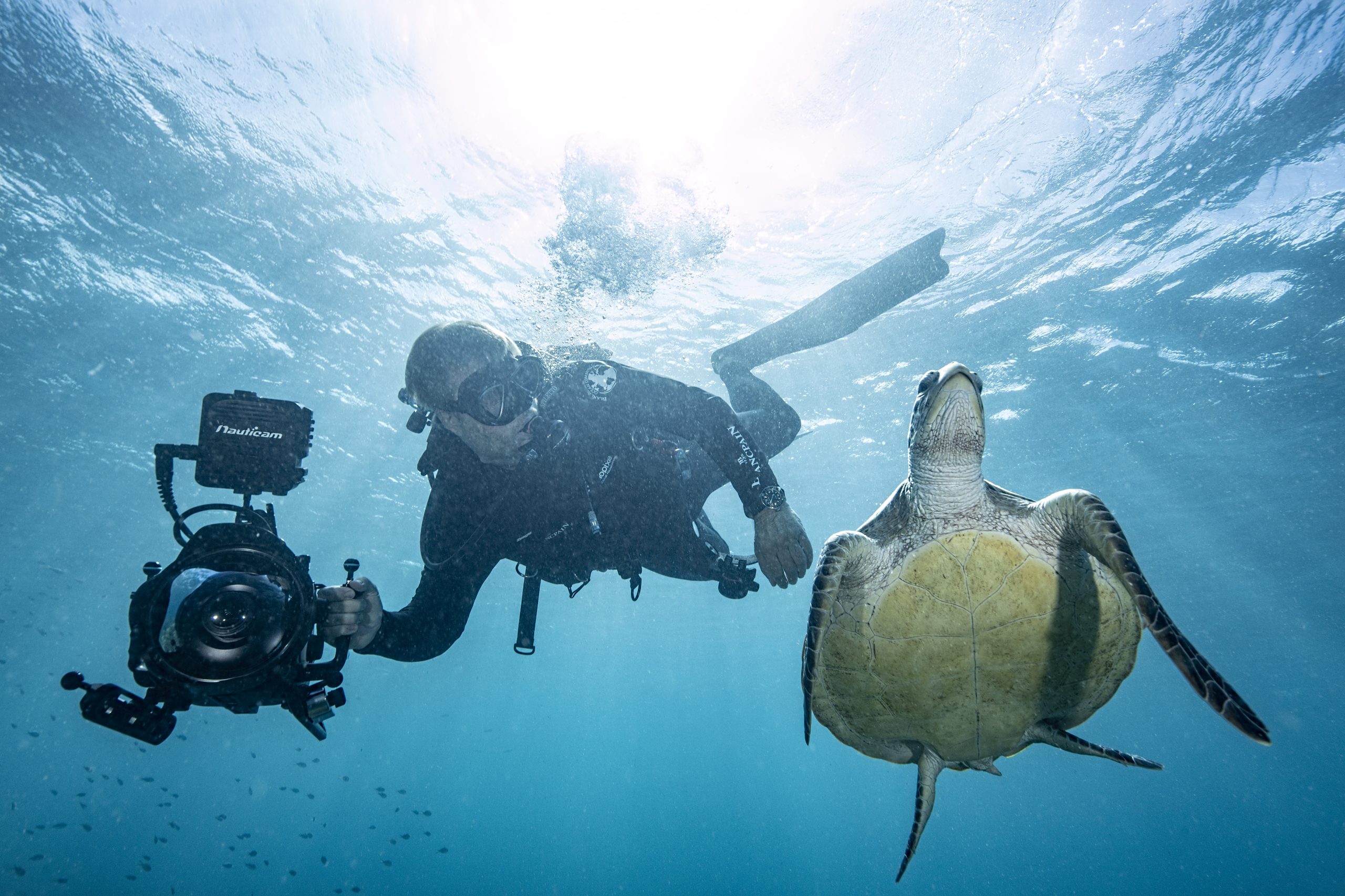 Ever since the first documented mass-bleaching event in 1998, we’ve heard repeated warnings about the perils facing Australia’s most famous crop of coral—a 348,700-square-kilometre living structure (the largest on earth) that hugs the northeast coastline.

“My concern is that my kids growing up won’t know the reef like I know,” says Dr. Adam Barnett, director of the Biopixel Oceans Foundation. “I don’t want to take my kids snorkelling in 10 years and them be excited about just seeing one coral—that’s what I’m scared of.”

Despite such words, Barnett also breathes some hope into the conversation.

“When all that stuff came out about the reef being dead, it was a little bit of miscommunication by the media. There was a lot of coral bleaching and die-offs in the Far North Queensland waters, but the reef is too big to die completely. And bleaching doesn’t mean death—it can recover.” 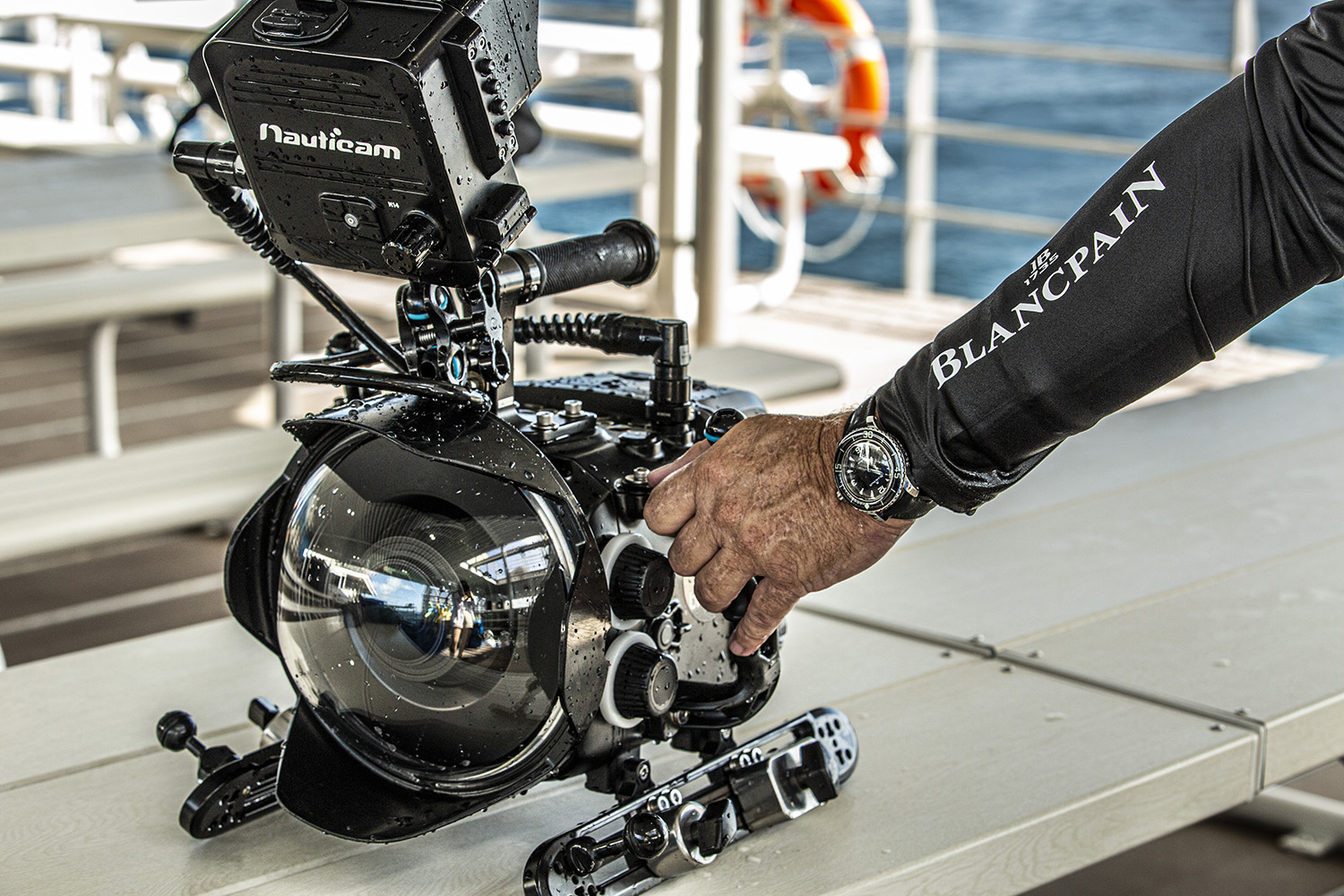 The Biopixel Oceans Foundation is the first Australian organisation to receive support from esteemed Swiss watch manufacture Blancpain—the move informing the horologer’s Ocean Commitment initiative, a near 20-year-old program that has seen more than $70 million donated in support of research and conservation efforts.

“The traditional funding model for research organisations like us is long gone,” adds Barnett. “First off, you need a government in place that actually believes in the effects of climate change, but it’s fortunate there are companies out there, like Blancpain, who want to help us do the research and try to conserve the reef.”

Blancpain’s history with the ocean runs deep, developing the first ever dive watch, Fifty Fathoms, in 1953. The famous timepiece was the brainchild of then Blancpain CEO Jean-Jacques Fiechter, an avid diver who sought a timepiece with which to properly explore the waters below.

Current CEO Marc A. Hayek—also a keen diver—has continued Blancpain’s aquatic alignments and conservation efforts, while also reintroducing the Fifty Fathoms in 2007. Today, it represents around 35 percent of Blancpain’s sales.

“The Blancpain Ocean Commitment has grown in importance over the years,” Hayek tells Robb Report. “Whereas in the past we had to focus on raising awareness, today we can more often take part in field activities. Because after awareness, comes action.” 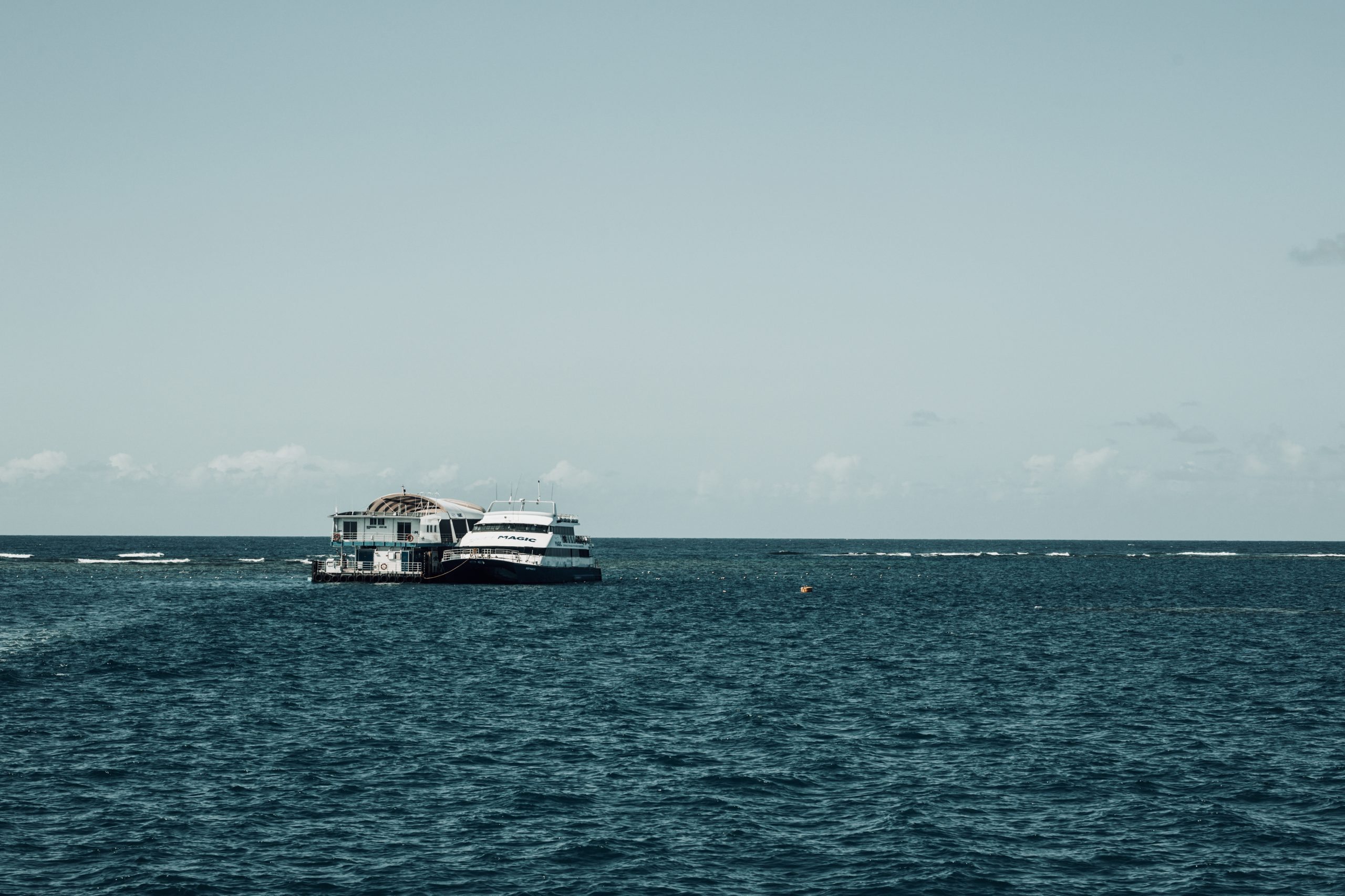 As for his company’s push into Australian waters: “The Great Barrier Reef is a gigantic lung which can positively or negatively influence other regions, depending on how it is protected. Part of the Great Barrier Reef has already disappeared. We have to limit the damage in order to save it.

“I mean, Australia is a jewel of the ocean and of nature in general. Ningaloo Reef, Western Australia, and so many other places are teeming with wildlife whose health is crucial to the rest of the world. So it’s not just Australia we’re trying to give something back to, but the entire world.”

The money committed to the Biopixel Oceans Foundation has seen the group—with links to the Emmy award-winning underwater film crew Biopixel, as headed by marine biologist and self-confessed “fish nerd” Richard Fitzpatrick—create a series of documentaries with Blancpain, highlighting the environmental work underway on the reef and the personalities behind driving such efforts.

Biopixel was formed in 2013 by Fitzpatrick and Australian IT entrepreneur Bevan Slattery, and holds what is the largest marine natural history archive of the South Pacific, creating high-definition visuals for the likes of the BBC, National Geographic and, now, the Blancpain-aligned series, based on their various aquatic expeditions.

The impressive “Megafauna” projects in 2019 and 2021 enabled the team to discover an aggregation of whale sharks off the coast of Far North Queensland— a previously undocumented gathering, which also led to the possible discovery of a new shark species.

While documenting whale sharks—two of which have been affectionately named Blancpain and Fifty Fathoms—is exciting and important work, tracking the animals is central to the research, as scientists look to analyse the movements of marine animals between protected areas and endangered zones. “What we’re trying to do is get people invested in the reef beyond the coral. We all know about what’s happening with the coral, but we need people interested in the wildlife that is so central to the reef and that without the reef wouldn’t exist,” offers Fitzpatrick. “The documentaries allow us to showcase what’s here in an interesting, engaging way, and this expedition that we filmed wouldn’t have been possible without the help of Blancpain.”

It was the Biopixel Oceans Foundation’s commitment to the reef that recently drew the Swiss manufacture from its Le Brassus headquarters to the balmy, tropical climes of Cairns. “We’ve been completely persuaded by the Biopixel Oceans Foundation,” says Hayek. “First, because it acts on multiple fronts: scientific research, awareness—through images of exceptional quality—and restoration. Also because it shows a great seriousness and commitment which mirrors its deep will to make a difference.”

Like the environment that surrounds them, the small community of scientists, researchers and videographers in Cairns are all connected, forming their own ecosystem of shared data, projects and researchers, something that Robb Report witnessed on a recent reef expedition.

As part of the journey, we headed to a newly built pontoon and research centre at Moore Reef, a two-hour boat ride across the Coral Sea from Cairns. Wedged into an unflatteringly tight wetsuit and among a group that included Andy Ridley, the founding CEO of Earth Hour and founder of Citizens of the Great Barrier Reef, Alicia McArdle, manager of the Mars Assisted Reef Restoration System (yes, the famed chocolate brand also wants a healthy reef) and Professor Matt Dunbabin, creator of an artificial intelligence robot to help regenerate the reef, we indulged in a magical underwater experience, far removed from those fatalistic media reports.

“It’s definitely helping, but we need the tools,” says Dunbabin when quizzed about the impact of these and other initiatives designed to assist the reef. “The reef’s too big to die completely, but until we do something about climate change, we need to give it the tools to adapt and evolve.” 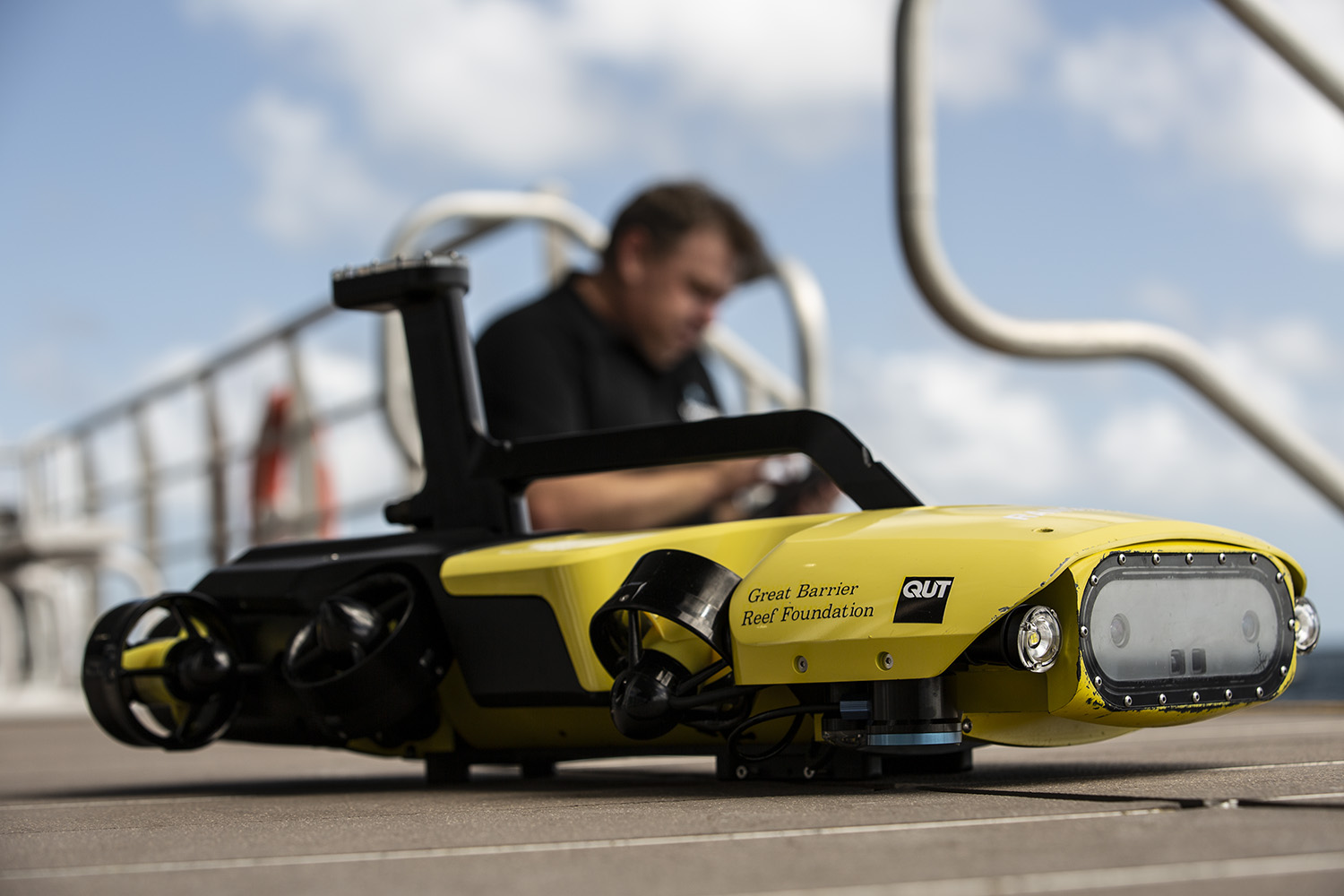 Fitzpatrick views the reef as the canary in the coal mine, and also highlights the most important of words in relation to the Great Barrier Reef—recovery. “We need to get carbon neutral. It’s the only way we’re going to save the planet … Yes, the reef is bleached in parts, but bleached coral can recover. It doesn’t mean it’s dead.”

A refocus on the reef’s resilience should be better vocalised, too. “There needs to be a greater focus on that,” says Eric Fisher, biology manager and master reef guide with GBR Biology. “After every major bleaching event and tropical cyclone, the reef has a great ability to recover and come back, and we need more stories like that.”

These are small wins when compared to the numerous challenges confronting the Great Barrier Reef. But they offer tangible hope—for the future of the reef and for future generations. It’s this message that is central to a new three-part documentary by Biopixel and Blancpain, set to debut later in 2022. “The notion of ‘generations’ is dominant in the watchmaking universe—we create our pieces with the future in mind. And to ensure the future, that of the next generations, we must protect the environment,” says Hayek. “Any positive action makes a difference. Even the smallest actions count. We must all, as human beings—and not just as an industry— play our part and act for our planet.”