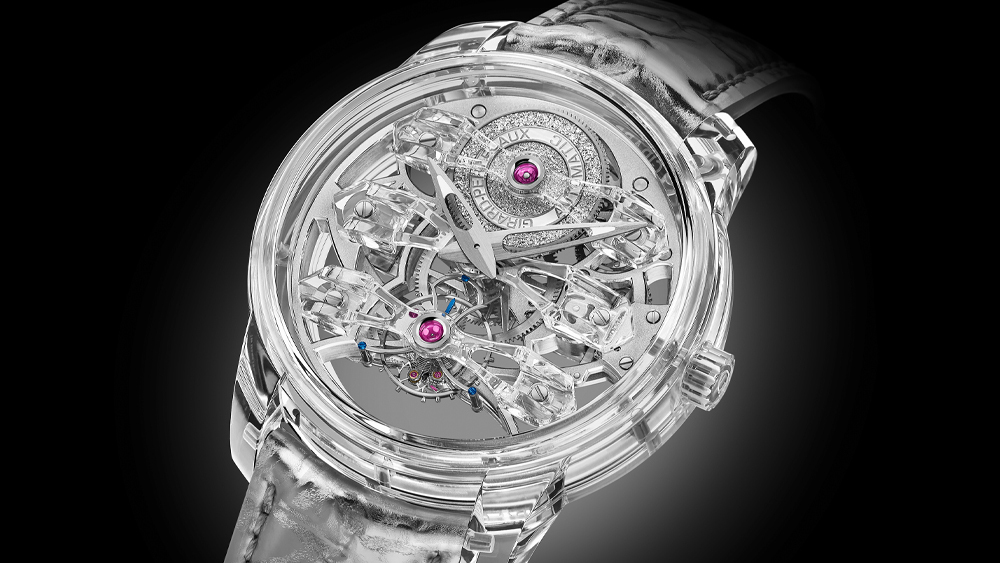 The brand is upping the ante on its 136-year-old movement with a very modern material.

Girard-Perregaux’s wildly modern Quasar watch just got a facelift that is taking the haute-horology timepiece to new heights. The watch first debuted exactly a year ago and highlighted the watch brand’s famous Three-Bridges movement in skeletonised titanium housed in sapphire crystal, to stunning effect.

Taking it one step further, this year the Quasar comes with bridges that are also made of sapphire crystal—as the second hardest material on earth other than diamond, the material is extraordinarily difficult to machine and, as a result, it comes with a price tag to match. The new Quasar Light is approximately $140,000 more expensive than the titanium-bridged version at $445,000 and will be limited to just 18 pieces (its predecessor is not limited, but production remains extremely low—at the manufacture’s most efficient operating capacity it can only make three per month).

Crafting sapphire at such small dimensions on watch bridges is an incredible challenge and a costly endeavour, but it delivers an undeniable design impact. The sapphire crystal is created by merging particles of oxygen and dihydrogen at nearly 3,000 degrees Kelvin (or 2726 degrees Celsius). A sapphire crystal disc is created that is then cut, machined, drilled, domed, and polished using tools made from diamond (another cost factor), that requires over 200 hours of work. The material is one of watchmaking’s ultimate aesthetic statements, allowing for a level of horological voyeurism that can prove irresistible to some collectors.

In the case of the Quasar, it offers a 360-degree view of the watch’s inner mechanics as well as its tourbillon, which is powered by a unidirectional automatic winding system with a micro-rotor made of white gold. Both the tourbillon and the bridges are anchored by a titanium mainplate finished in sand-blasted rhodium for a silver finish. The previous Quasar’s titanium mainplate had a NAC treatment, similar to PVD coating, to give off a grey hue.

The Quasar Light is topped off with a barrel at 12 o’clock decorated in Ruthenium. “It’s part of the platinum family,” says Clémence Dubois, Girard-Perregaux’s product marketing director. “The annual production is 100 times less than gold and 10 times less than platinum, so it’s a super exclusive material. It gives this sparkling effect to the watch and highlights the sapphire bridges.” So glittery in fact, that it’s easily mistakable for diamonds.

The Quasar is easily the star of Girard-Perregaux’s current collection, offering a mix of watchmaking prowess and modern design that looks unlike anything else on the market. Not surprisingly, CEO Patrick Pruniaux says that clients who buy a Quasar tend to be customers of brands that skew more modern like Hublot and Richard Mille—both brands are known for their sapphire crystal creations—Richard Mille’s RM 56-02, introduced in 2014, came with a price tag of over $3 million, which makes the Quasar look like a steal by comparison.

And if you’re looking for another excuse why the Quasar will give you a justifiable bang for your buck, here’s some crystal clear persuasion: Having tried it on, we can say it’s as wearable on a woman’s wrist as a man’s, even at 46mm x 15.25mm. And in case its metallic strap is too flashy for you, the watch also comes with a complimentary alternate black alligator option. Either way, no one will notice the strap when you’re wearing this piece of horological artwork.