Made for deep waters, the timepiece boasts a water resistance of up to 300m and a helium valve.

It’s not every day you see a dive watch with a skeletonized tourbillon movement. Angelus is here to change that.

This week, the Swiss watchmaker unveiled a limited-edition version of its U53 tourbillion watch in khaki green. It’s a timepiece that, despite its transparent caseback and rarefied mechanism, is designed to be worn underwater.

The 46mm watch has a water resistance of up to 300 metres, luminescent hands and markers, an internal unidirectional flange to help you keep track of how long you’ve been underwater.  The case is made from grade 5 titanium, a lightweight metal that’s highly resistant to scratches and magnetic fields encountered on deep dives. It also has the added benefit of not irritating the skin in high-moisture conditions. There’s even a helium escape valve so you can wear the watch for saturation diving.

You’ll find the valve at 9 o’clock, while the screw-down crown, which controls the flange, is located at 2 o’clock. A second crown at 4 o’clock can wind the watch and set the time. Angelus’s logo has been applied to its crystal, and if you take a closer look you’ll spot watchmaker’s monogram repeated at 12 o’clock. 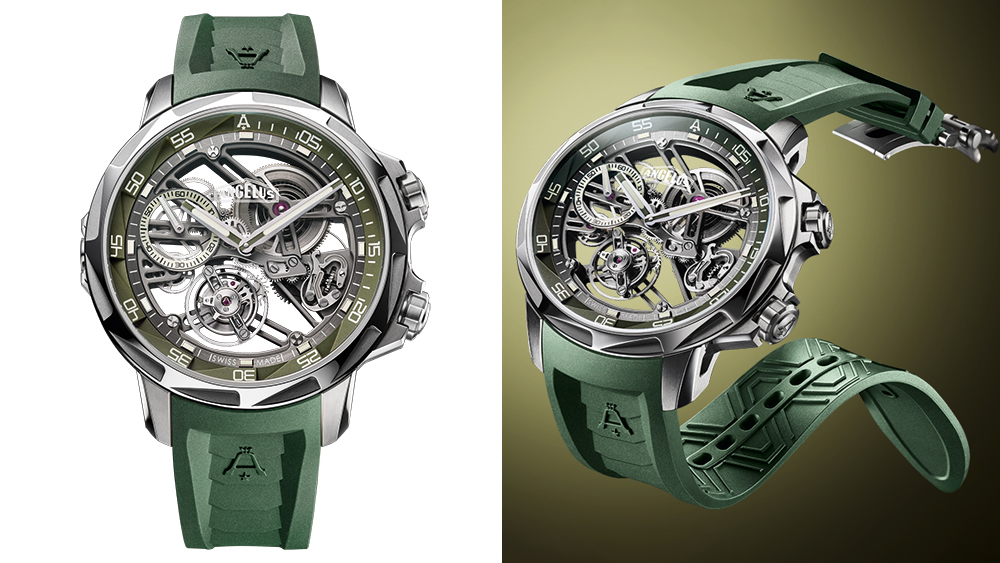 The Angelus U53 mounted on a green rubber strap. Angelus Watches

Inside the watch’s anti-reflective case, its vital components are on display in a slightly asymmetrical arrangement, from its tourbillion between 6 and 7 o’clock and its small seconds counter between 9 and 10 o’clock. The U53 timepiece runs on a hand-wound, skeleton movement that reaches a power reserve of up to 60 hours. Dubbed the Angelus A-300, the movement is characterized by its large bridges, which are seen in an openworked arrangement at the centre of the dial.

The new U53 tourbillion diver watch comes mounted on a green rubber strap, but you’ll also have the option for a hand-stitched NATO strap. Limited to just 25 pieces, the diver is now available for $58,500 from select retailers.  angelus-watches.com