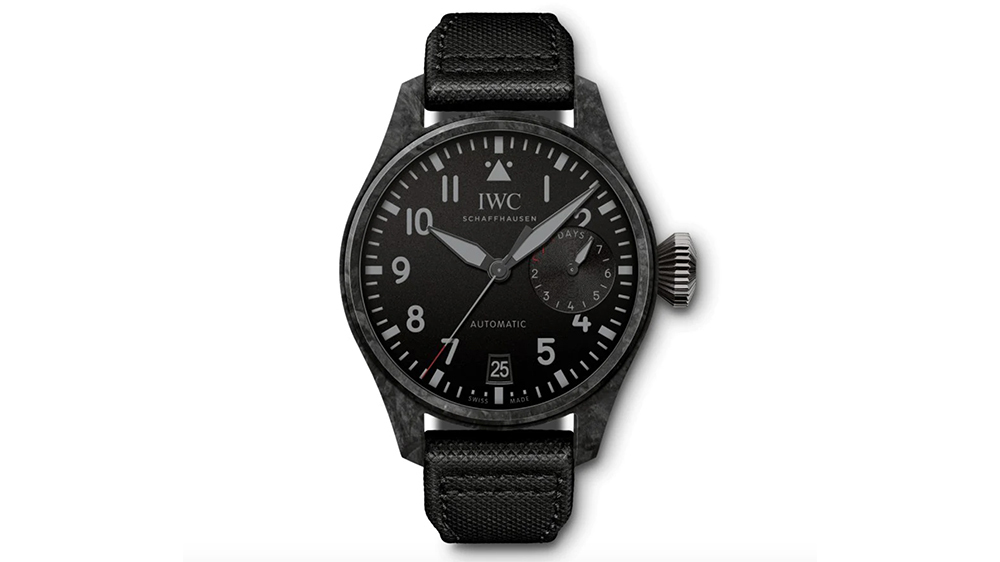 Only 100 examples of the limited-edition timepiece will be produced.

IWC Schaffhausen is dressing up its beloved Big Pilot’s Watch for a sleek new limited edition. The Swiss company has just announced a “Black Carbon” variant of the classic, oversized and highly legible timepiece, one that manages to make an already stylish watch even more appealing.

The first thing you’ll notice about the watch is its marble-like matte black carbon case, which shares the same hefty 46.5mm size as the non-limited editions of the watch. Inside, there’s a soft-iron inner case that helps protect the mechanism against magnetic fields and preserves its accuracy. The dial features luminescent carbon hands, hours and other details, including the date window at the 6 o’clock position. The watch also comes with a 22mm-thick black calfskin strap to really complete its distinctive dark look.

Additional features include sapphire glass with anti-reflective coating that’s been secured against displacement by a drop in air pressure. The automatic, self-winding timepiece is also powered by IWC’s meticulously-crafted 52110 Calibre movement, which includes 257 components and 31 jewels, and has 168 hours of power reserve, or about a week’s worth of juice.

As dapper as the blacked-out timepiece looks, it’s also going to be hard to get ahold of, especially compared to the average Big Pilot’s Watch. IWC has announced it plans to only produce 100 examples of the watch, each of which will set you back approx. $28,300 a piece. The “Black Carbon” edition is now available exclusively through the company’s boutiques.

Of course, this isn’t the only eye-catching Big Pilot Watch variant IWC has released over the last year. Last Spring, the watchmaker announced that it was releasing a left-handed version of the timepiece. Aimed at pilots—a larger proportion of which are, anecdotally, left-handed compared to the general population—the watch features a conical crown at 9 o’clock instead of at 3 o’clock on the traditional version.