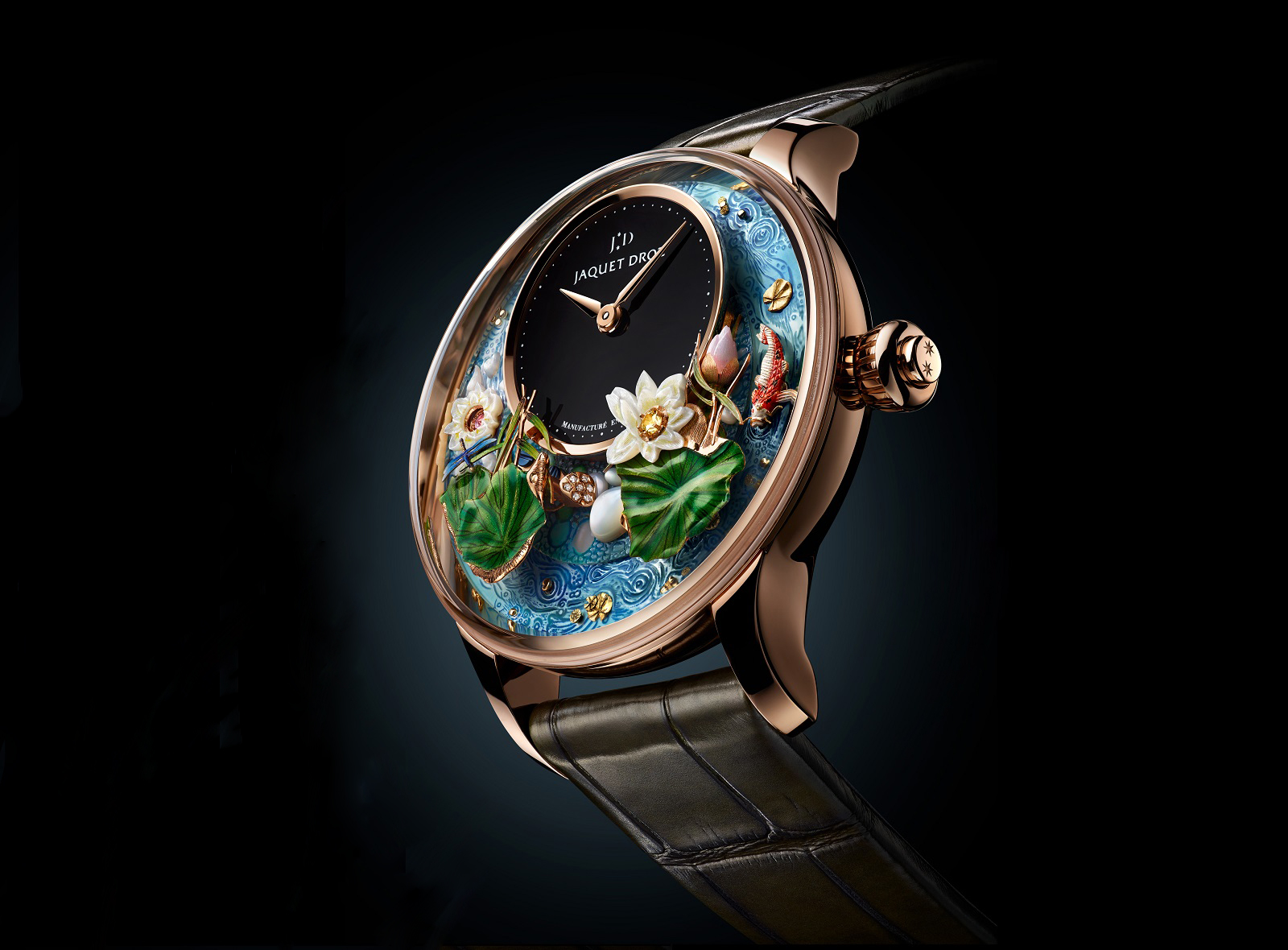 The Magic Lotus Automaton depicts an aquatic version of Eden.

All watches tell the time. A scant few reveal astronomical details and other horological esoterica. But only one, as far as we can tell, features a 4-minute-long circular animation that depicts an Eden-like garden replete with budding lotus flowers and frolicking koi fish.

Behold the new Magic Lotus Automaton wristwatch from Swiss watchmaker Jaquet Droz, a specialist in what the brand calls “the art of mechanical astonishment.” Introduced in May, the extraordinary timepiece required three years of development, which is easy to understand when you see the graceful poetry on its sophisticated dial.

The scene shows four flowers, each representing a season. At 3 o’clock, a hand-carved mother-of-pearl button symbolizes an unopened lotus bud, aka spring. To its left, a blooming lotus—with a yellow sapphire pistil and gold prong stamens—evokes summer. A lotus flower that’s fallen into the water and is poised to be swept away represents fall, while a diamond-set seed pod at 6 o’clock marks winter, as its buried seeds prepare to spawn new lotus buds in spring. 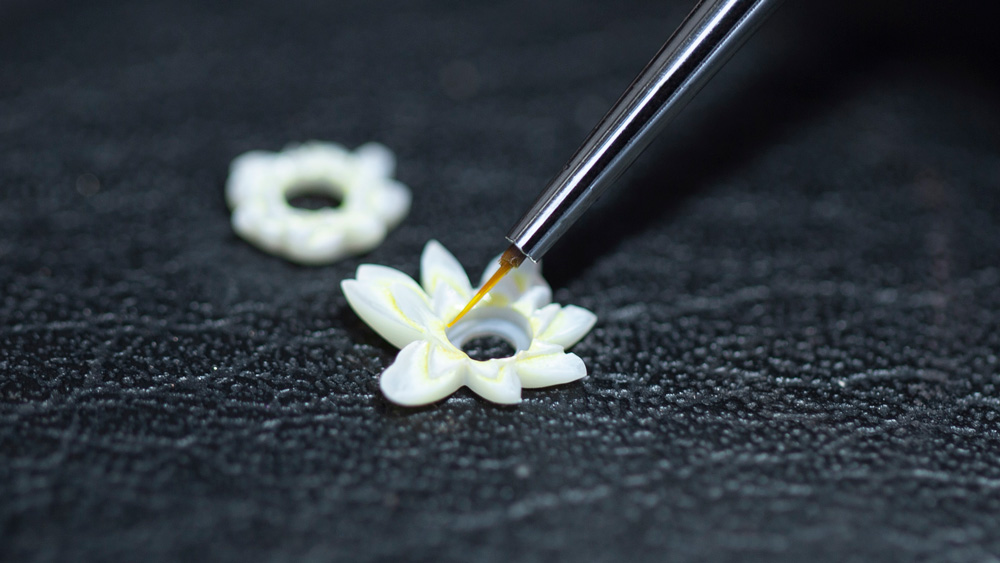 The dial of the Magic Lotus Automaton comprises three parts. The first is made of onyx accented with gold hour and minute hands. Around it sits a crescent-shaped fixed disk where the lotus life cycle plays out, complete with reed stems and three suspended lotus leaves in Grand Feu enamel on an 18k white gold or red gold base.

The fully rotating third peripheral disk features two animations: One involves a handcrafted gold koi fish that both flaps its tail, as if it’s actually swimming through the water, and moves up and down, gently diving beneath the lotus leaves, while the other is a floating lotus that acquires a new center stone—be it a blue sapphire, yellow sapphire or ruby—each time it passes beneath the dial or leaves. 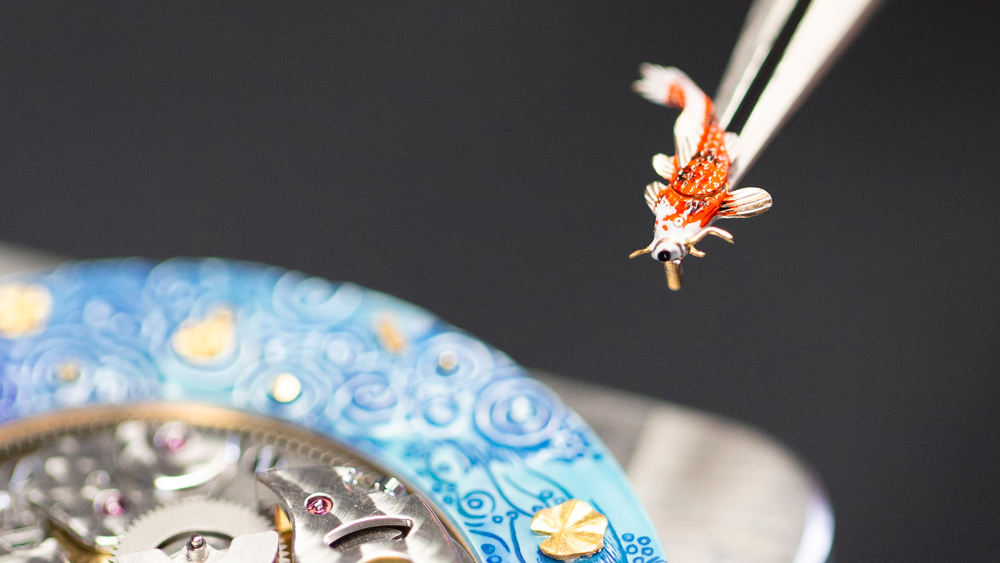 “The same stone never appears in the same place from one rotation to the next,” according to a brand statement. “The color of the lotus heart changes, invisibly, four times for every rotation around the river, and the same stone is never seen twice in a row.”

A delicate, hand-painted blue-green dragonfly positioned between 8 and 9 o’clock serves as the power reserve, chronicling the progress of this lengthy animation. When the power reserve is empty, the dragonfly rests on a lotus leaf.

Jaquet Droz accomplished this feat of mechanical artistry using a hand-wound mechanical automaton movement with a push-button mechanism that animates the pond, carp and lotus flower—500-plus components in all. A second, self-winding movement powers the hour and minute display. 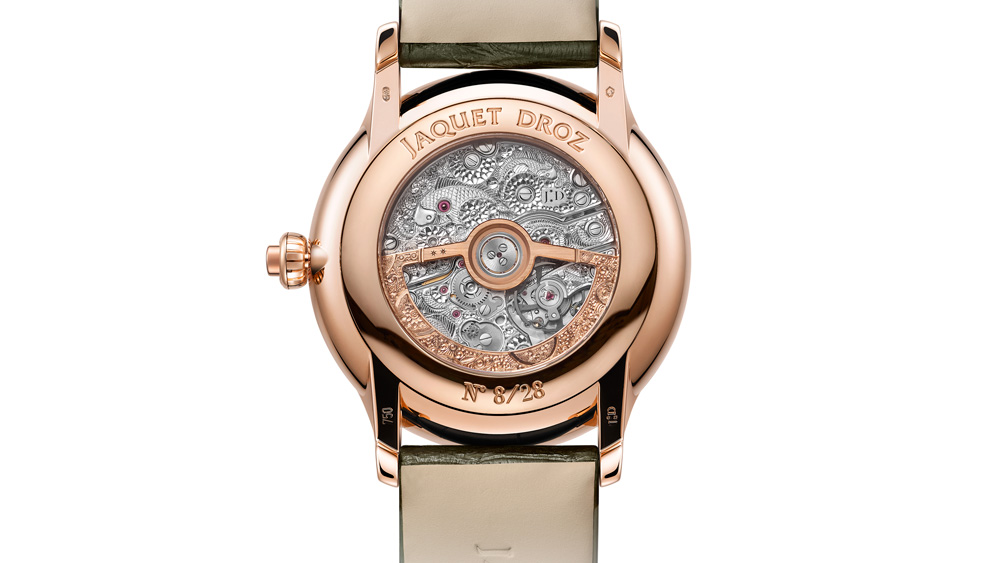