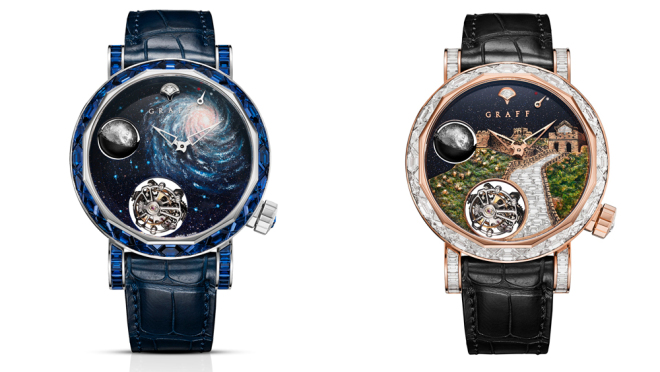 While still making room for a double-axis tourbillon.

Graff has a way of expressing the monumental in miniature form. Undeterred by a mere 48mm canvas—one that is already occupied by a double-axis tourbillon and a marble-sized 3D moon—Graff depicts the Great Wall of China, the three-tiered Temple of Heaven and the universe itself on the dials of new GyroGraffs introduced at Baselworld last month. Scaling down the cosmos or one of the world’s seven wonders to mere millimetres is no small feat. These multi-layered watches are anything but ultra-slim at 17.25mm-thick—the invisible setting alone requires a metal layer of mesh grid under the girdle of the diamonds—though the faceted case design, meant to resemble the facets of a diamond, reduces some of the visual thickness.

The GyroGraff was introduced in 2014 to showcase its complicated movement along with high-level metiers, including detailed hand-engraving, miniature painting and gem-setting. Previous GyroGraffs have illustrated the Shanghai skyline, a map of the world from space, and a motor speedway from behind the wheel of a racing car. 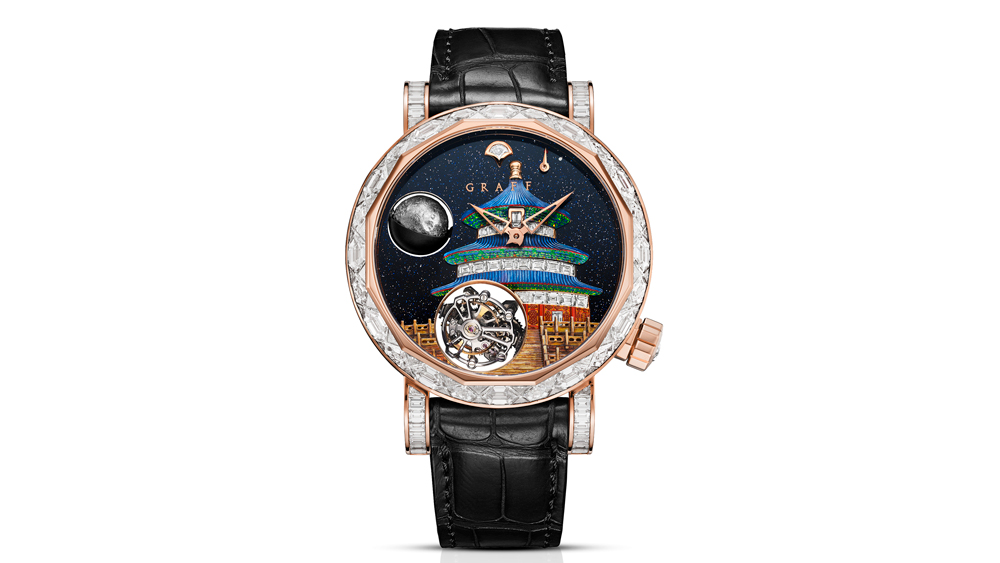 The dials of the new Chinese-themed watches are comprised of several overlapping layers on four planes, all hand-finished, in a process that takes 100 hours. The first layer is a background made of aventurine to create the look of a starry sky. The second layer on the Great Wall of China piece is a plate sculpted from a single piece of gold, hand-engraved to depict the walls and towers and then hand-painted to create detail with an ink that patinates the gold. The next layer is composed of finely hammered gold that is miniature painted to resemble foliage. The icing on the cake is the diamond layer, with tapered baguette diamonds individually cut and invisibly set, mosaic-style, to represent the stone base of the wall. Baguettes also form the triangular pediment on one of the towers.

The Temple of Heaven is also composed in four layers, starting with an aventurine background and topped by a three-dimensional gold piece painted in detail to represent the temple. The structure is delineated by three broad tiers under each pagoda-style roof, represented by three rows of invisibly set baguette diamonds. Two more levels of gold form the stairs and brick wall that surround the temple.

The bezel is an example of Graff’s next-level gem-setting capabilities. Instead of being lined up like soldiers along the bezel, in the conventional watchmaking style, the gems are set mosaic-style using baguettes cut precisely into diamond and half-diamond shapes and fitted precisely flush in an invisible setting. Graff is primarily a jewellery company with mine-to-market capability. It has a stake in diamond mines in Lesotho and Botswana, as well as controlling interest in the South African Diamond Corporation. For its jewellery and watches, Graff custom cuts its own diamonds from the rough, and its watches are often lavishly set with diamonds—some with upwards of 100 carats.

This expertise has carried over to the brand’s watches, which it started making in 2008. Graff has also created several of its own calibres with some of Switzerland’s most prestigious boutique movement makers—the GyroGraff was developed in partnership with MHC, a Swiss complications specialist. It is a manual-wound, double-axis tourbillon with moon phase and power reserve. The marble-sized spherical moon is hand-carved with a true-to-life map of lunar craters. A black cover rotates over the sphere to indicate the current moon phase. The hands are small and skeletonized so as not to interfere with the composition.

Graff also introduced three universe-themed GyroGraff models at Baselworld last month. Although they contain the same movement, these pieces are less complex in terms of dial composition, but only by comparison to the Chinese models—the dials on the Universe models are a 50-hour job. Using a single strand of hair, artisans paint a stylized depiction of the cosmos over an aventurine background. There are three versions of the Universe GyroGraff, each unique, with bezels set the same way as the Chinese pieces, but with blue sapphires. Each watch is, naturally, price upon request.