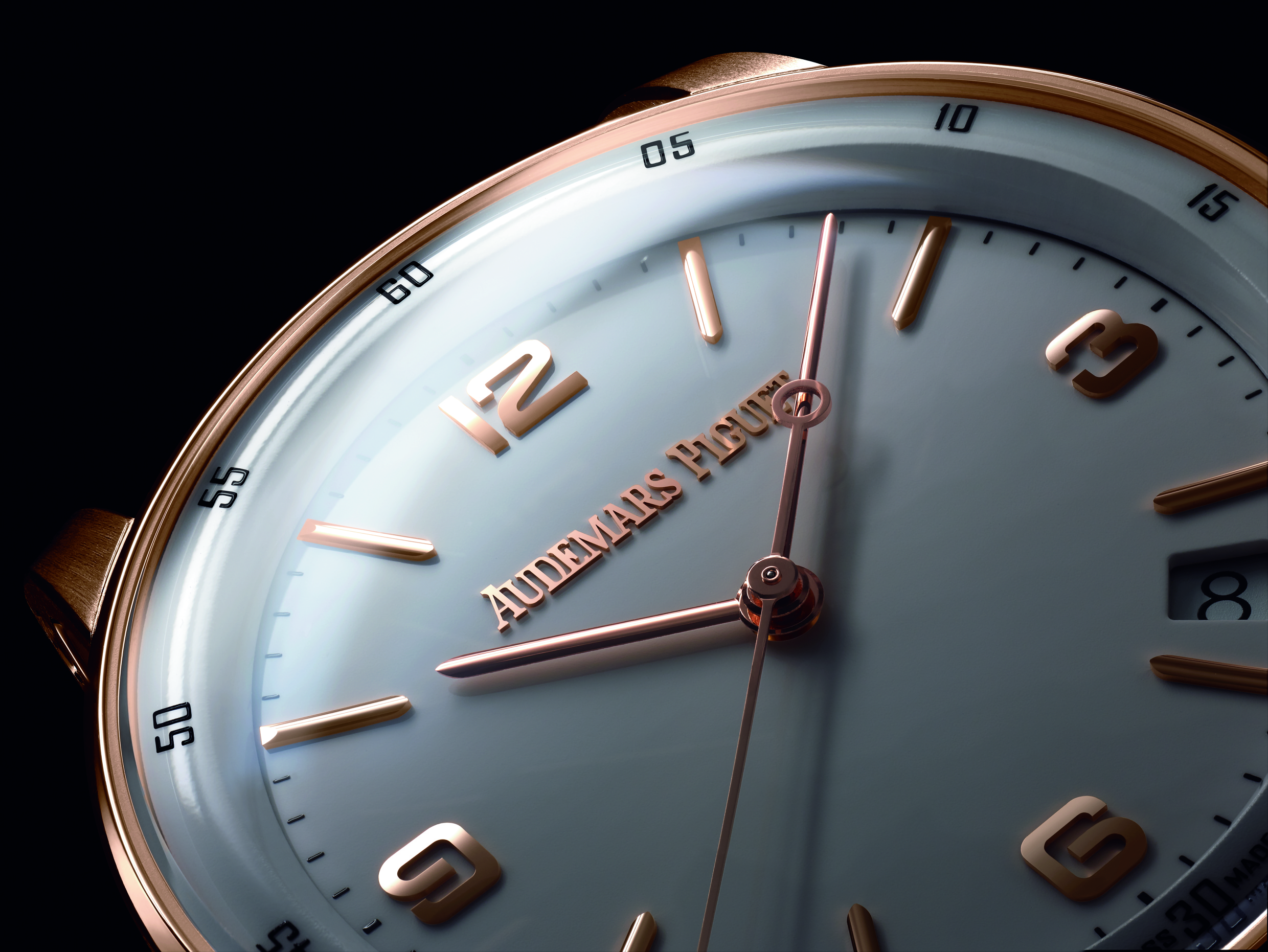 These watches set fire to SIHH 2019

Fabienne Lupo, who runs the Salon International de la Haute Horlogerie (SIHH) – Geneva’s annual watch fair that started out, in 1991, as luxury group Richemont’s riposte to Baselworld – says that the annual event’s aim is “to become a kind of Davos of watchmaking”. It’s an audacious mission statement, given that the World Economic Forum literally sets out to make the world a better place: but the 29th SIHH event, which took place in January, showcased the extent to which watchmakers are rising to the challenge, when it comes to enriching the horological ecosphere.

As usual, many of the innovative masterstrokes found within the branded grottos at the Palexpo exhibition centre were mechanical in nature. Baume & Mercier wowed even the most finicky of horological engineering geeks present – and they weren’t short in number – by adding a perpetual calendar to the arsenal of complications (silicon hairspring, high-performance escapement, five-day power reserve) introduced last year to the new Baumatic range ($34,800). Also worth a look are the eight new Classima Lady Steel watches with new dial sizes and automatic quartz movements, the version with Classima mother-of-pearl quartz and a diamond-set bezel being the stand-out ($6200). 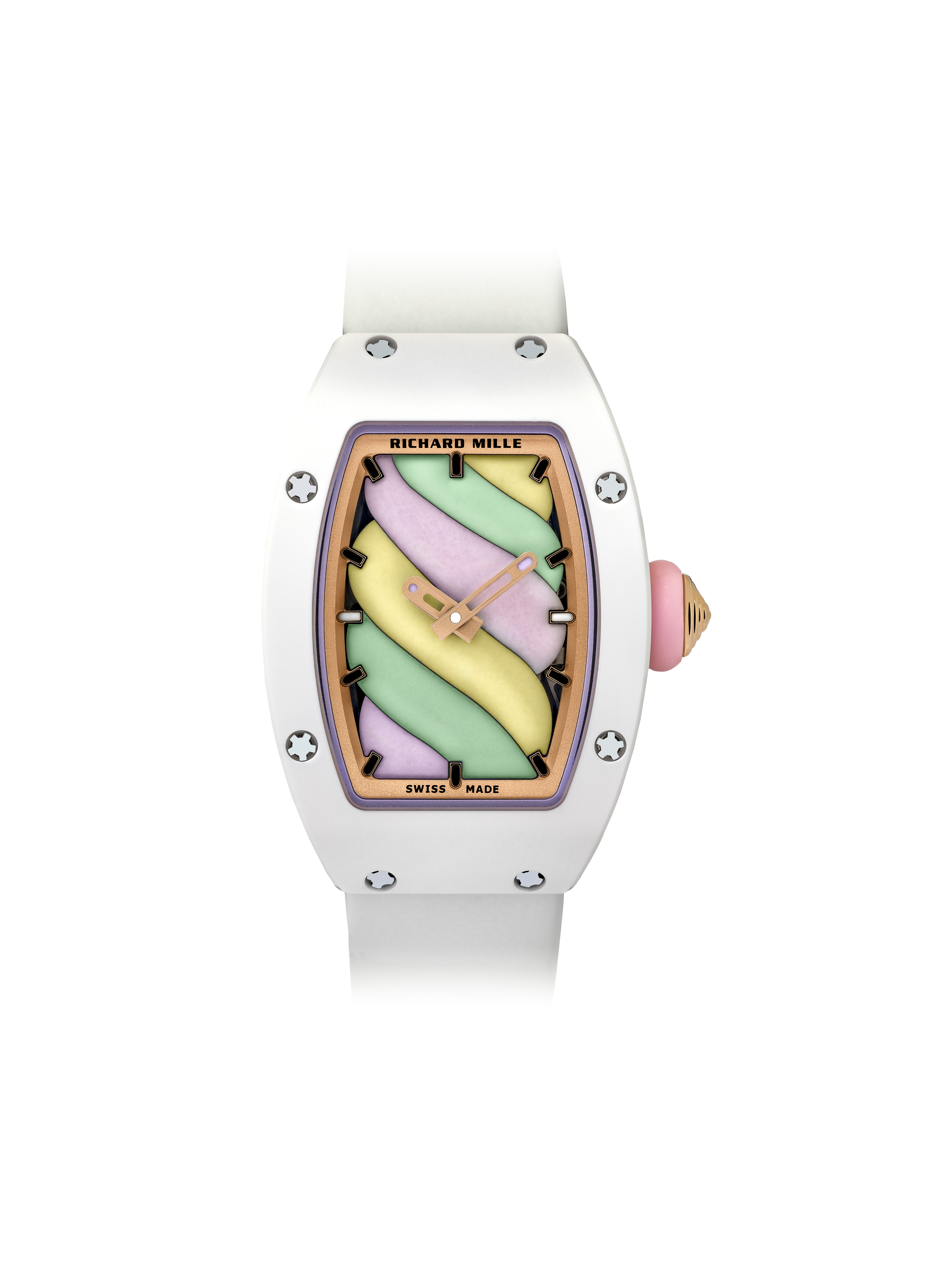 Another impressive mechanical ‘first’ came from Jaeger-LeCoultre, whose Master Grande Tradition Gyrotourbillon Westminster Perpétuel ($1.274 million) features a minute repeater that eschews the traditional two-note ding in favour of the familiar four-note refrain sounded by Big Ben. Girard-Perregaux’s new 48mm bead-blasted titanium piece, the Bridges Cosmos (POA), offers a 60-hour power reserve thanks to an impressive new calibre that lies within, while A. Lange & Söhne’s Zeitwerk Date – a 10th-anniversary celebration piece – features a glass ring date, with printed numerals from 1 to 31, which circumferences the dial and nudges a notch further around it each midnight (around $141,700).

There was also plenty of inventive zeal with unconventional materials: sat atop Piaget’s Altiplano’s ultra-thin calibre is a meteorite dial – blue in the 41mm pink gold Tourbillon version ($188,000), grey in the 40mm pink gold version (from $41,600) – while RJ Watches’ ARRAW 6919, complementing a patented mechanism that displays a 3D moon rotating 360°, features materials scraped from the lunar surface (POA). And, moving from ultra-rare materials to problematically ubiquitous ones, Panerai presented its Mike Horn Edition Submersible, an edition limited to 19 pieces, each with a strap made from three recycled plastic bottles (around $32,000, or $64,000 for a special edition that includes training with Horn in the Arctic).

Two brands, in particular, showcased some serious R&D vigour with crystals: one being Audemars Piguet, whose new range, entitled Code 11.59, as well as three new in-house movements including an integrated column wheel chronograph with flyback function, features a sapphire crystal that is domed internally but vertically curved between 6 o’clock and 12 o’clock (POA). Take our word for it – it does far more for depth, perspective and legibility than it sounds like it should. Bovet also nudged the known crystal envelope, its Récital 26 Brainstorm Chapter One piece being entirely cased in sapphire crystal ($414,500).

Watches that wear their heart on their sleeve – we refer to ‘skeletonised’ or ‘openworked’ pieces – seem ever more abundant at both the annual fairs. Audemars Piguet’s aforementioned Code 11.59 collection features, among its 13 iterations, a Skeleton Tourbillon; Ulysse Nardin’s Skeleton X, meanwhile, takes a sporty, hyper-modern approach to the form (including a version in Carbonium®Gold, a material usually used in the aerospace sector; $31,050).

Perhaps the most surprising addition to the skeleton canon unveiled here, though, was a model being added, along with a chronograph, to Cartier’s Santos range, which enjoyed a successful re-launch last year. The slightly Batman-esque, all-black Noctambule model features Super-Luminova on its movement bridges, numbers and minute and hour hands ($37,500). The Révélation d’Une Panthère in white gold with diamonds ($385,000) – whose dial features a panther’s face made up of gold beads, which disperse to the bottom of the dial with a tilt of the wrist – was another stand-out when it came to the French house’s new offerings.

The many SIHH attendees with a strong penchant for dial decoration weren’t left disappointed – the delicate slate guilloche on Parmigiani’s Toric Chronomètre ($37,800) and Greubel Forsey’s lavishly micro-engraved Art Piece Edition Historique ($872,000) were stand-outs – but other brands showed a tendency towards zanier methods. That includes Richard Mille, whose nectarous new collection is made up of 10 models that articulate their creator’s affection for sweets, cupcakes, pastries and fruits (they were designed by ladies’ collection director Cécile Guenat, who is Mille’s business partner and friend Dominique Guenat’s daughter). While most of the collection, which features 3000 miniature sculptures, adheres to the brand’s familiar multi-layered, miniature toy-theatre look, the standout piece here – the RM 07-03 Automatic Marshmallow – is fronted by a gently ridged panel of elegant, pink and white, hand-enamelled swirls ($230,500).Panerai’s new 47mm Submersible Chrono Guillaume Néry Edition features a dial textured in grey to resemble a shark’s skin (around $30,400). (The special edition, $62,000, comes with a unique experience with Guillaume Néry, after whom the watch is named, in the ocean depths of French Polynesia). 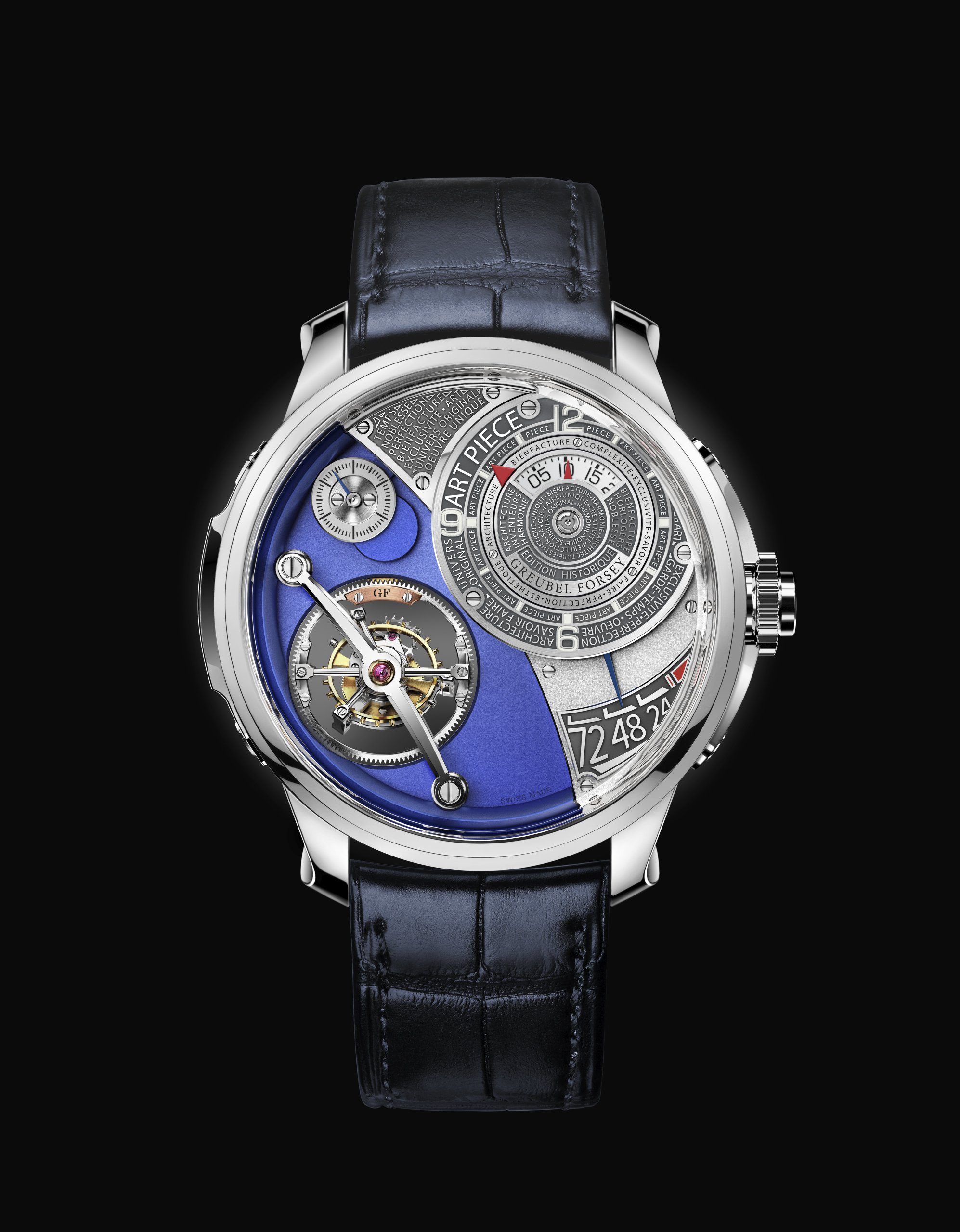 No watch fair is complete without an horological-automotive collaboration, thanks to predecessors such as Ball For BMW, the Pamigiani Fleurier Bugatti Atalante Flyback Chronograph and – of course – the Rolex Oyster Perpetual Cosmograph Daytona. Here, the openworked nature of the Excalibur One-Off by Roger Dubuis, produced in partnership with both Lamborghini and Pirelli (around $1.492 million), exposes marvels such as its flying tourbillon, modelled on the V-shaped engine block of a Lamborghini. (This one-off edition was sold immediately after launch.) The pick of the military heritage bunch – alongside all of Panerai’s output, by virtue of its brand-defining history as a supplier to the Italian Navy – was IWC Schaffhausen’s Spitfire Collection (from $6700 to $42,600), a tie-in with the house’s sponsorship of the forthcoming Silver Spitfire/The Longest Flight project. 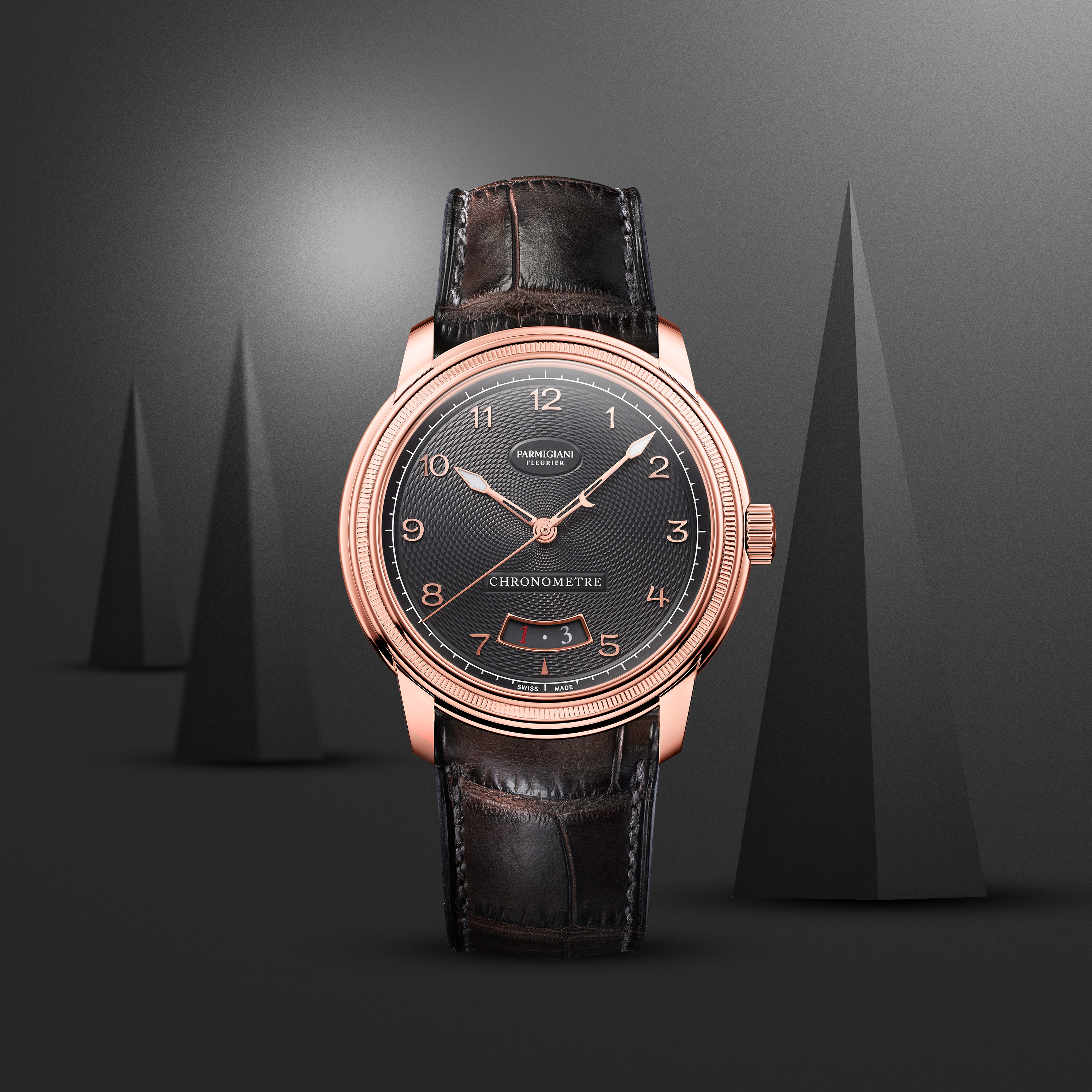 This mission will see two British aviation enthusiasts, Matt Jones and Steve Brooks, circumnavigate the planet, covering 43,500 kilometres over four months, in a silver Spitfire Mark IX. Also drawing on adventure as a theme was Montblanc, whose additions to the 1858 Collection with bronze cases, khaki dials and NATO straps are engraved with a ‘Spirit of Mountain Exploration’ design (around $4600 to $9300). The Richemont show it may well be, but since 2016, SIHH has been drawing an increasing number of smaller, artisanal brands to its special Carré des Horlogers zone within. And, among these tirelessly innovative independents, RJ was not the only one with a zest for experimentation.

F.P. Journe’s audacious Tourbillon Souverain Vertical (around $343,500 in red gold and around $349,000 in platinum), according to the company’s eponymous founder François-Paul Journe, actually improves on an invention that has been at the apex of horological precision for over 200 years. “I designed this vertical tourbillon so that its functions remain constant whether the watch lies flat or is placed on its side,” he says. Elsewhere in the Carré des Horlogers area, Christophe Claret presented its new Angelico: another tourbillon, this one inspired by 18th century marine chronometers, with a long detent escapement and cable-type fusee (around $334,500 in red gold, around $306,300 in titanium); MB&F launched a steel version of its sci-fi-ish HM6 (around $295,000), which has sapphire crystal domes in each of the four corners of its biomorphic case; Armin Strom ushered a sapphire version of its Dual Time Resonance – another watch with a fully exposed movement – into its repertoire (around $393,000); equally eye-catching was DeWitt’s Academia Hour Planet watch (POA), which has a beautifully textured globe embedded in its dial. 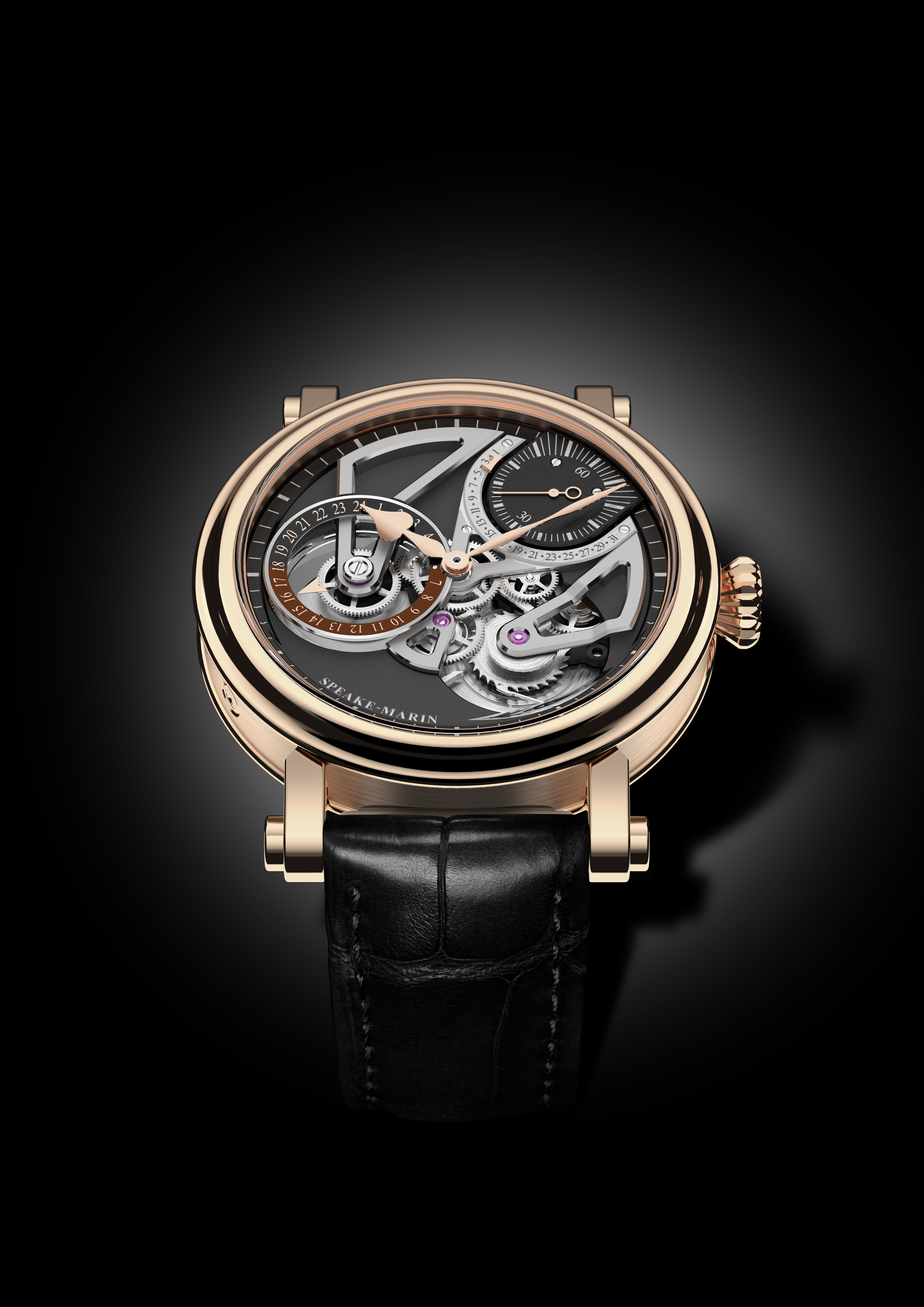 Next door, Speake Marin’s One&Two collection offered up yet another openworked marvel: a travel watch combining a dual time indication and a retrograde date (around $23,000 in titanium; around $41,500 in red gold); small Belgian manufacture Ressence introduced its Type 1 Slim (around $23,595) – an exercise in pared- down futurism – while HYT possibly picked up the gong for the most outlandish revelation in its H20 Time is Fluid model, another exercise in hydraulic horology (around $161,500 in steel, around $175,000 in gold).

The Swiss Alp Watch Concept Black from H Moser & Cie – the brand that, two years ago, convinced the world to take a watch case made from Swiss cheese seriously – resembles an Apple smartwatch but, lacking any kind of time-based display, communicates the time aurally ($553,800). Ferdinand Berthoud presented the 2019 ‘Oeuvre d’Or’ iterations of its FB 1 Chronometer in white gold and diamonds (around $396,750) and rose gold (around $362,300).

Hautlence unveiled its HL Vagabonde Tourbillon ($37,800), whose bizarre-but-grows-on-you aesthetic was made up of a central disc, three satellites and a one-minute flying tourbillon at 6 o’clock, all overlapping, within a 18kt red gold lozenge case. Surely the most eye-catching mechanical conceit on display, though, belonged to avant-garde engineering mavens Urwerk. 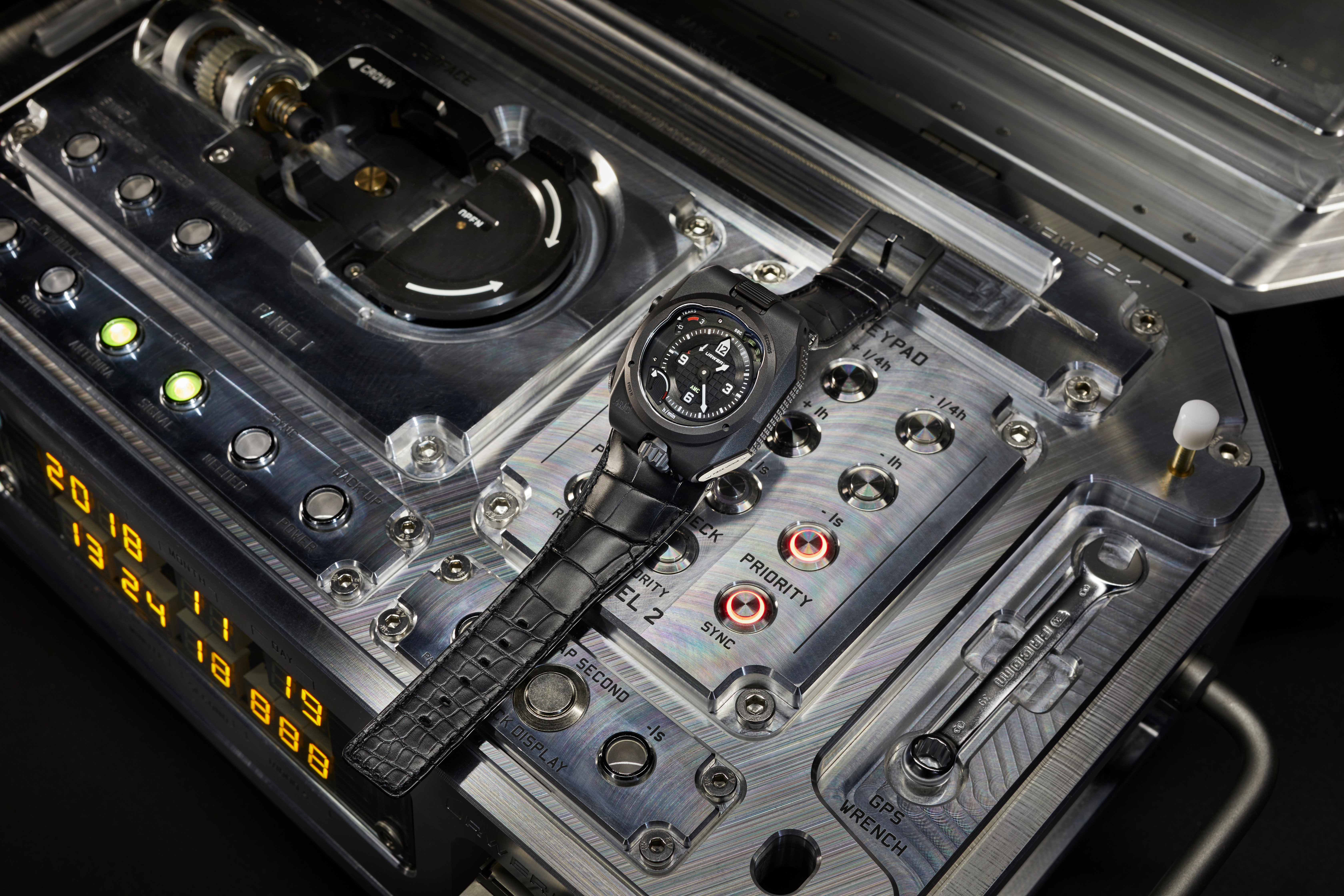 The company’s ambitious flagship project, AMC (see Robb Report July-August 2018), marries two devices: the Atomolith, a 35-kilogram atomic clock within an aluminium case, and a mechanical watch that, when docked, is chronometrically aligned to the mothership ($3.9 million).Disruptive boutique brands notwithstanding, SIHH is predominantly a showcase for Richemont’s brands – but that doesn’t stop others getting in on the act, running their own mini watch fairs out of Geneva’s more upmarket hotel suites.

Thus did attendees who ventured away from the Palexpo get to take in models like the TAG Heuer Carrera Calibre Heuer 02T Tourbillon Nanograph.

Being piggy-backed like this is, of course, a compliment to organisers of a premium horological event that’s likely to become stronger and more relevant with the announcement that SIHH and Baselworld will begin coordinating dates so that they coincide from 2020. Given the creative zeal showcased here – the houses’ tireless capacity for rejuvenation and reinvention – it’d take a curmudgeon not to hope that the move provides the industry as a whole with a shot in the arm.