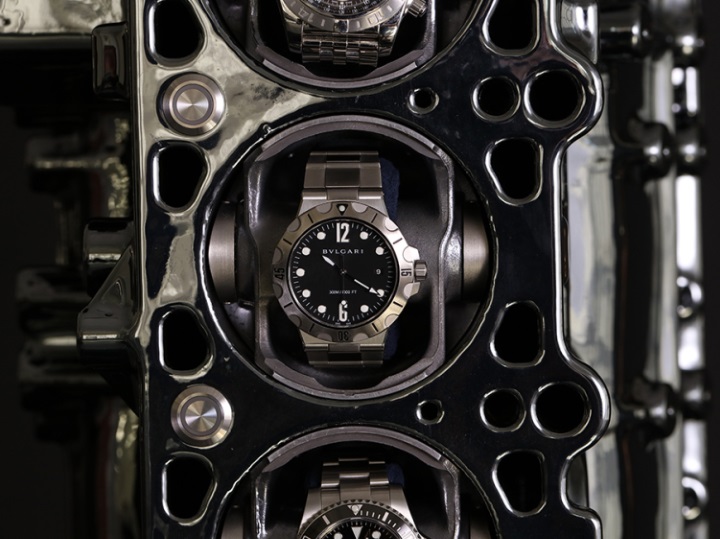 The ultimate gift for a car-loving watch enthusiast

Built from a BMW engine block, this watch winder draw utterances of ‘why didn’t I think of that?’ from friends.

Los Angeles based Vulcan Innova has unveiled a new watch winder, from $US25,000 (about $A32,500), destined to appeal to the automotive set. Built from a BMW M52 engine block — the workhorse engine that powered the 328i and 528i of the late '90s — the winder is one of those clever designs that will draw utterances of "why didn't I think of that" from many.

Fitted with individual high-grade stepper motors (allowing for individual control), each watch is mounted into a modified piston, acting as its winding module. When engaged, each of the pistons are locked into position until a security key is engaged for its removal, ensuring your watches cannot be removed or tampered with unknowingly. Vulcan Innova is offering the new winder as a limited production of 52 pieces, with each unit being hand-assembled in Los Angeles to its new owner's specification. A variety of finishes are available for both the engine block as well as each individual piston/watch holder. The leather type and colour of each watch holder, as well as its LED indicator colours can also be tailored on request.

Those preferring a freestanding option are in luck, as Vulcan Innova will also be offering customisable floor stands at an additional cost. A base price of $US25,000 (about $A32,500) includes a painted or chrome-plated finish and suede watch cushions, with more elaborate customisation incurring an additional fee. Delivery times are expected to be between four and six weeks, depending on chosen finishes.