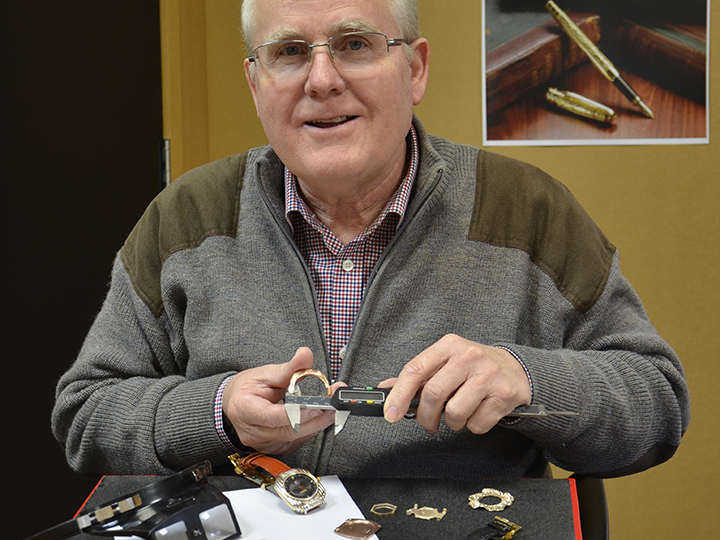 The Australian jeweller taking on the world’s best watchmakers

A small workshop in country Victoria that already challenges top Swiss penmakers is now taking on the world’s finest watchmakers.

To get some inkling of the craftsmanship and skill that go into a Curtis Australia watch, crafted in Victoria by world-renowned jeweller Glenn Curtis, just turn one over.

The screws that secure the case-back to its body are works of art in their own right. Hand-drawn from solid gold wire, they are formed to the exact diameter needed, then hand-threaded and fitted with a miniature screw head before being polished and inserted. The process requires hours of work by a jeweller with decades of experience. Invisible to anyone but the wearer, these tiny screws are perhaps the most prescient example of the level of detail that Glenn Curtis aims to bring to the world of luxurious timepieces.

If his name sounds familiar, it’s with good reason. Curtis (pictured, top) previously brought his decades of experience as a jeweller to the world of luxury bespoke pens. Working with precious metals and gems, his team created bejewelled writing implements that were recognised by Robb Report (US) in its 2013 ‘Best of the Best’ issue, and remain sought after internationally by aristocracy, royals and celebrities alike.

The grandson of a watchmaker, Curtis perhaps inevitably would turn his deft hands to matters horological. Similarly predestined was that a life-long passion for beautiful jewellery would play a part.

“My grandfather and great-grandfather both were into watches, repair, servicing and making watches,” Curtis explains. “I still use some of my grandfather’s tools, which were passed down to him. So there’s a generational thing of using and being attracted to watches.” The result was the launch in late 2016 of an initial range comprising both men’s and women’s timepieces. Utterly unlike anything offered up by the centuries-old Swiss watchmaking institutions, the Australian designs also bear little resemblance to the gem-encrusted offerings from that emanate from Italy’s famous houses of high fashion.

Watches produced by Curtis Australia begin life in a flask of liquid gold, heated to 910°C. Each case and case-back is drawn from the same batch – to ensure uniformity of colour and texture – and the pair is brought together by master jewellers who ensure precise tolerances are achieved. A gap of 0.3mm would be rejected for being too wide. A precision movement supplied by a respected Swiss maker is said to feature astonishing accuracy thanks to a minute quartz coil that oscillates 32,768 times each second, and each mechanism is again hand tested on-site before being installed. Watch faces are also constructed by hand, each individual baton delicately positioned to ensure precision and clarity.

As the watch takes form it is filed, shaped, emeryed, pre-polished and emeryed in the opposite direction, before being hand-polished to bring out the deep lustre of the gold. After each stage it is re-inspected, in a process that can take days to complete. Curtis Australia watches typically feature numerous gems set into the surround, and the design can of course be modified to the customer’s wishes. Locally sourced diamonds, rubies, sapphires and other precious stones can be set into virtually any design.

Each gem is colour-matched and precisely sized, and set in place by hand by skilled jewellers with at least 10 years of experience – the minimum, Curtis believes, to have achieved the required levels of precision and concentration. Each individual setting requires at least 25 different hand movements to ensure a perfect fit, before hand-formed beads are raised to secure the gem in place.

The entire watchmaking process – from blast furnace to hand-polishing and the fitting of the finely crafted leather band and deployment clasp – typically takes several weeks, depending on the level of detail or uniqueness required.

The watch designs are sketched by Curtis and fleshed out by Trevor Brown, a qualified designer and silversmith who has worked for English jeweller Asprey, producing silver to mark the Queen’s Golden Jubilee and for Middle Eastern Royal Families. The pair have been working together on Curtis pens and jewellery for 15 years.

“One of our core strengths is design and if you want your design brought to reality with the nuances you want, nothing beats doing that in-house. Otherwise you’ve got someone else’s culture, someone else’s ideas, influencing where you go with that design,” Curtis says.

A unique selling point is the ability to not only purchase his-and-hers versions of selected watches, but to match a watch to custom-made cufflinks, or a ladies’ necklace or ring, for a multi-dimensional expression. Curtis Australia’s watch range runs from around $10,000 to $34,000. Above that are bespoke versions, an option that Curtis has always offered his pen customers and which he expects to be popular among watch aficionados with a taste for individuality. Based in a small workshop in country Victoria, Curtis Australia already competes for sales with the world’s finest penmakers from Switzerland, Italy and Germany. Curtis isn’t about to take a backward step from taking on Switzerland’s famed haute horlogerie institutions.

“They’re predominantly using stainless steel cases that are machined and engineered, and they do not have any organic feel about them at all,” he says, sounding like the bespoke jeweller that he is. “[We wanted] something with a bit more shape than just having a slit for the lugs to go in for the band, that’s just turned out on a machine and doesn’t have any ripples or shape or movement to it.

“I’ve always thought you shouldn’t be going into [designing] any product just to copy someone else. I’d like to produce something and offer something to people that gives them another choice.”