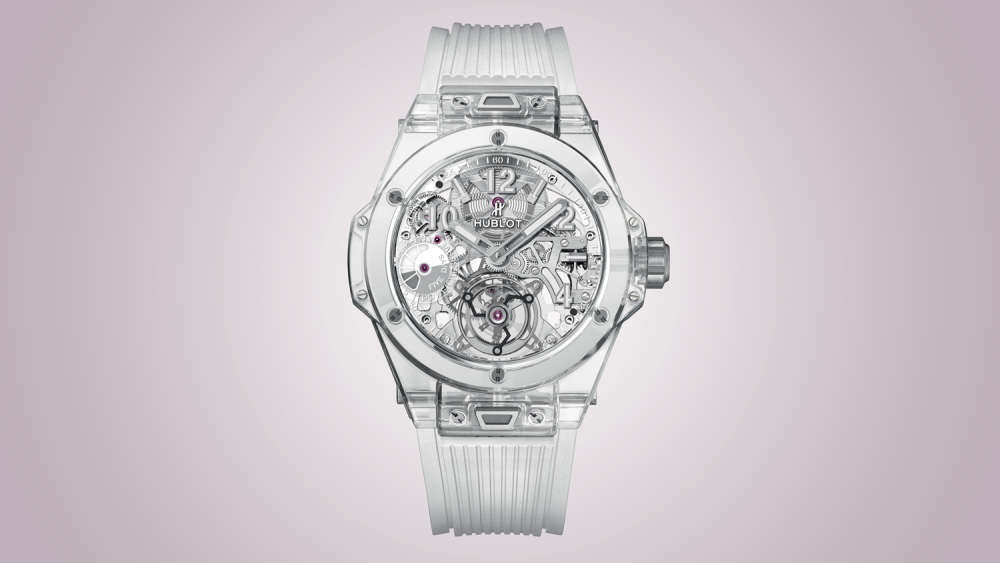 The new release marks the first time this watch has been rendered in sapphire crystal.

Hublot has been upping the ante with its experimental use of tough materials in recent years, from Magic Gold to its recent unveiling of a Red Magic ceramic timepiece. Now the Swiss watchmaker has introduced its Big Bang Tourbillon Power Reserve 5 Days for the first time in sapphire crystal for a completely transparent timepiece. This crystal is the hardest and most scratchproof material after diamonds and is known for being extraordinarily tough to manufacture. Hublot has been playing with sapphire crystal watches for the last two years in the Big Bang Unico and in various colors in its Big Bang One Click Sapphire timepieces. The first-ever sapphire-crystal-cased watch was the RM 056 by Richard Mille, of which Richard Mille reportedly sold five prototypes for $1.65 million each in the midst of the recession.

Hublot’s Big Bang Tourbillon Power Reserve in sapphire crystal comes in at $148,000 or $190,000 with a diamond-set bezel, with each version limited to 99 pieces. The watch features the HUB6016 caliber—an in-house, manually wound tourbillon with a whopping 115-hour power reserve. The movement was previously used in the Big Bang Tourbillon Power Reserve 5 Days in Magic Gold. The caliber is housed in a multipart case cut from solid pieces of sapphire, which are milled and polished to achieve the final shape. In addition to the case, a sapphire strip that acts as the tourbillon bridge gives the appearance that these delicate parts are floating. Now, the skeleton tourbillon movement can be viewed in its entirety with the metallic gears nearly unobstructed. The dial, numbers, indices, and power-reserve indicator are all opalescent beneath perforated hands.

Per usual chez Hublot, this watch is a very big timepiece at 45 mm and 14.25 mm thick, but it’s incredibly light compared to other Big Bangs and makes a serious statement on the wrist—one that’s fragile in appearance but nearly as tough as diamonds.