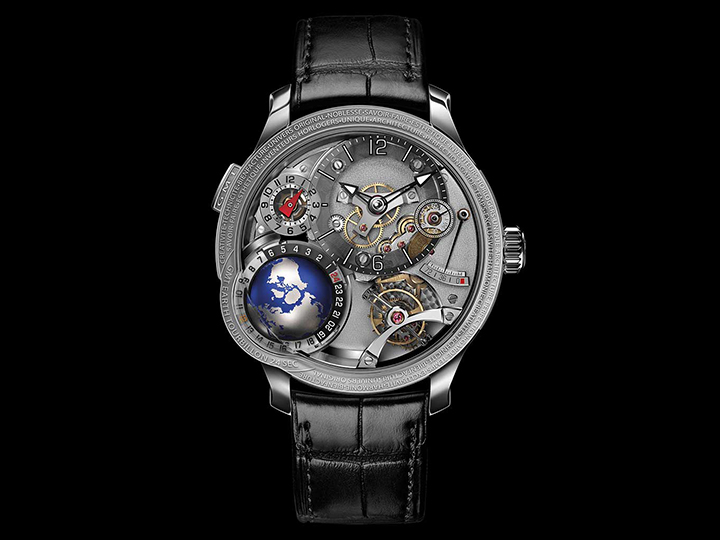 Fifteen of our favourite watches from SIHH

The year’s first major watch exhibition threw out more than a few tasty morsels over which to salivate. Panerai is focusing on three main pillars this year: Luminor Due, Luminor and Innovation. At SIHH 2018, it was clear that it’s a big year for Luminor Due.

The collection, first introduced in 2017, has expanded with 38mm, 42mm and 45mm variants, and a variety of textile straps. One of it even comes with the Chinese inscription of ‘Fu’, meaning fortune, on its caseback. It’ll be a hit with the Asian market, but unfortunately will only be available in June, way after the Lunar New Year.

The Marina line under the Luminor collection also sees a number of new models. Apart from textile straps, it also uses a new P.6000 hand wound movement with a three-day power reserve.

As for the Innovation pillar, Panerai reimagines two timepieces. Lo Scienziato is now available in a titanium case that’s 30 per cent lighter than a solid case, thanks to Direct Metal Laser Sintering (more commonly known as 3D printing). L’Astronomo on the other hand, features Panerai’s first moonphase complication, and even comes with a couple of customisation options. Richard Mille certainly knows how to play it up when it comes to acknowledging some of the world’s trailblazers, with pieces such as Jean Todt and Rafael Nadal. The brand does it again at the SIHH 2018 with the RM 53-01 Tourbillon Pablo Mac Donough.

The piece pays homage to famed Argentinian polo player, Pablo Mac Donough. While this is actually the second timepiece made for Mac Donough, it’s the first full shockproof polo watch in the market.

Richard Mille RM 53-01 Tourbillon Pablo Mac DonoughRichard Mille also showcased a gold version of the timepiece st SIHH 2018
It uses tonneau-shaped reinforced sapphire crystal that behaves like tempered glass, absorbing shock when struck, preventing it from shattering. Test it out if you must – the brand claims that the glass is resistant to impacts of up to 5,000G.

The movement used in this timepiece is similar to that used in RM 27-01 Rafael Nadal, using cables to suspend the movement within the case to protect it from shock. If there’s a singular takeaway for January 2018, it’s that women are taking the stage (cue Golden Globes’ #TimesUp campaign). Cartier backs it up with no less than 10 expressions, showcased at the SIHH 2018.

First up: The Cartier Libre collection is available in five different models, including an iconic Crash Radieuse. The Santos de Cartier sheds some winter weight while featuring a new bezel design, patented quick-switch system, and smart link system allowing you to remove links as you please.

You can’t miss the signature felines either. The Revelation du Panthere features 900 free moving gold microbeads that form the face of a panther when tilted, while the Rencontre de Cartier features two cats huddling over a ring on the dial. Then there’s also the Ronde Louis Cartier, covered in wood and gold leaf marquetry. Seventeen years ago, we rejoiced at the introduction of Parmigiani Fleurier’s Kalpa collection. The collection receives a swanky update in its tonneau-shaped cases at the SIHH 2018 this year.

Each of the three models, Kalpagraphe Chronometre, Kalpa Hebdomadaire and Kalpa Chronor, are fitted with in-house tonneau-shaped movements that fill the case perfectly. Our pick of the lot is the Kalpa Chronor, home to the world’s first full-gold self-winding chronograph movement.

And where time and speed are of the essence, Parmigiani Fleurier delivers. The new Parmigiani Bugatti Chiron houses a vertical co-axial movement, perpendicular dial display and vertical flying toubillon located on the side of its case. The skeleton timepiece is available in rose gold, titanium or white gold. Of course, customisations down to the smallest detail are more than welcome. A. Lange & Sohne released a fairly sizeable collection at the SIHH 2018 this year, but we’ll turn your attention to the Triple Split Chronograph. Like its predecessor, the Double Split, it has the ability to record split seconds and minutes. But get this: it can record up split hours too, up to 12 of them.

Also showcased at SIHH 2018 is the collection of 1815 Homage to Walter Lange collection. It pays tribute to Walter Lange, the great grandson of Ferdinand Adolph Lange, founding father of the brand. The dead seconds watch uses a patented system created by the senior Lange back in the day.

The Saxonia Thin Aventurine Blue Dial gets a new case size, and facelift on its dial. Also expect some line extensions like the 1815 Chronograph, Saxonia Moon Phase and Saxonia Outsize Date.

Little Lange 1 also shows the brand’s ability to excel even when out of its comfort zone. It sports guilloche dials in brown, grey and purple. The last may come across as an unlikely choice for a straight-laced brand like Lange, but hey, sometimes you’ve to show your fun side. Just when you thought a Piaget timepiece couldn’t get any thinner, the Swiss brand swoops in to knock your socks off. Showcased at the SIHH 2018, the 910P calibre is the slimmest ultra-thin automatic movement in the market at just 4.3mm in height. It’s a technical feat, considering the gears and pivots are mounted on the caseback of the Ultimate Automatic.

And Piaget is certainly not resting on its laurels. It’s working on the Altiplano Ultimate Concept which, when launched, will be just 2mm thick. But you don’t have to twiddle your thumbs while waiting for its release; the Possession watch comes with a rotating diamond bezel that’ll keep you occupied, for now. It’s a pretty huge year for Vacheron Constantin judging by the sheer number of releases. The Overseas collection welcomes dual time and perpetual calendar models in its family, while the Traditionnelle Tourbillon Ultra Thin comes with a new peripheral rotor (and movement Cal. 2160).

Then comes the debut of FiftySix, a collection that is clearly designed to reach a new target audience. It is inspired by Ref. 6073, a historical model from 1956. Take a closer look and you’ll realise that the shape of its lugs remind you of the brand’s classic Maltese cross.

That said, what really caught our eye was the Metiers d’Arts Les Aerostiers collection. It comprises five watches, each bearing a historically accurate, three-dimensional hot-air balloon used by famous voyagers. The timepieces also feature the use of plique-a-jour enamel, a first for the brand. You realise just how important a novelty is to Jaeger-LeCoultre, when it marks a milestone anniversary with a single release at the SIHH 2018.

In celebration of Polaris’ 50th anniversary, the brand designed a collection of contemporary-styled pieces. Inspired by the Memovox Polaris from 1968, Jaeger-LeCoultre eschewed the usual route of issuing re-editions.

The highlight of course, is the Polaris Memovox. The tribute watch is very much still one for the deep diver. Especially one who enjoys a balance between vintage (it sports cream-coloured markers) and technological advancement (the piece retains its underwater alarm function). It comes as no surprise that Automotive is the big theme for Roger Dubuis at the SIHH 2018, given that racing has always been in its veins. The Excalibur Aventador S, designed in partnership with Lamborghini, now comes in a stunning blue variation.

The face-lifted version also sports five new patents, including a 2x 45-degree V-shape concept, weight-reduced mechanism and and quick friction optimisation. Sounds like a lot of hyperbole? Maybe, but it is Roger Dubuis after all. If history has shown us anything, it is that the brand can and does deliver on its claims.

The brand rides even deeper with its collaboration with Pirelli. Think timepieces using used Pirelli tyres, seven different liveries to mark each tyre available, and a Quick Release System for ease of changing straps. It’s also a race against time, as these pieces will only be available from May to June this year. If a new year marks the sign of new beginnings, then Hermes is certainly taking a bold step forward. This is the first year the brand has decided to exhibit at SIHH 2018 instead of BaselWorld.

Despite not showcasing a technical novelty this year, the Carre Cuir, where dial and strap seemingly become one, and the diamond-studded Klikti still managed to steal the spotlight. Men can look forward to a striking new Carre H (it vaguely resembles a more refined version of Bell & Ross’s BR01 or BR03 series). First launched in 2010, the newest addition comes with a guilloche dial and a grained chapter ring.

In the aesthetics department, the well-loved Cape Cod receives a double tour mesh strap, while the Arceau Millefiori pocket watch comes with a mock alligator dial. Two things struck us most at Baume & Mercier’s booth at the SIHH 2018: the first is the new Baumatic movement. The second is the brand’s partnership with Indian Motorcycle, which, despite its name, is not actually from the subcontinent but the US. The company’s legacy stretches back to the start of the 20th century.

Meanwhile, the Baumatic is Baume & Mercier’s first silicon equipped movement. Produced by the Richemont production unit, it comes with a five-day power reserve and is available in COSC and non-COSC versions. It is another technical year for Greubel Forsey. Key launches include the Differential d’Egalite Invention Piece 5. This deadbeat seconds watch was first unveiled in 2008 and its accuracy continuously improved upon since.

Elsewhere, the GMT Earth had a complete globe visible in 360 degrees and a unique patented summer time display. Also of note were the new Double Balancier model and the Mechanical Nano Foudroyante. In terms of technical innovation, the Royal Oak RD#2 breaks new ground as the world’s thinnest automatic perpetual calendar. Its profile is an ultra-svelte 6.3 mm in height. Meanwhile, the Royal Oak Concept Flying Tourbillon, a women’s piece, showcases a flying tourbillon – a first for Audemars Piguet. A GMT version of this watch was also shown.

The Royal Oak Double Balance Wheel Openworked shows off the manufacture’s skill in skeletonising, while a frosted variant exhibits its artistic side. Finally, the Millenary now sports a retro touch in the form of a polished mesh bracelet. At Van Cleef & Arpels, the focus this year is on three categories: Poetic Astronomy, Heuer d’ici et Heuer d’Ailleurs, and Le Jardins. For us, the highlight had to be the Lady Arpels Planetarium watch. It has a nifty display of the solar system, or at least the Sun, Mercury, Venus, Earth and Moon. The latter rotates around the Earth once every 29.5 days, mimicking the actual movement of the lunar body.

Another watch – or series of watches – that caught our eye was the Midnight Zodiac Lumineux. Comprising 12 different models, each one depicts a Zodiac sign and stars that illuminate at the push of a button. It reminds us of the Midnight Nuit Lumineuse watch from 2016, but is an entirely different animal.

Finally, there is the Jardin collection. These high jewellery confections – all secret watches – are all unique pieces, which make them all the more desirable. This year, for the first time ever, Ulysse Nardin releases an automatic version of its iconic Freak. The Freak Vision has a silicon balance wheel, silicon gear train wheels, the unique Grinder winding system, and Ulysse Anchor Constant Escapement.