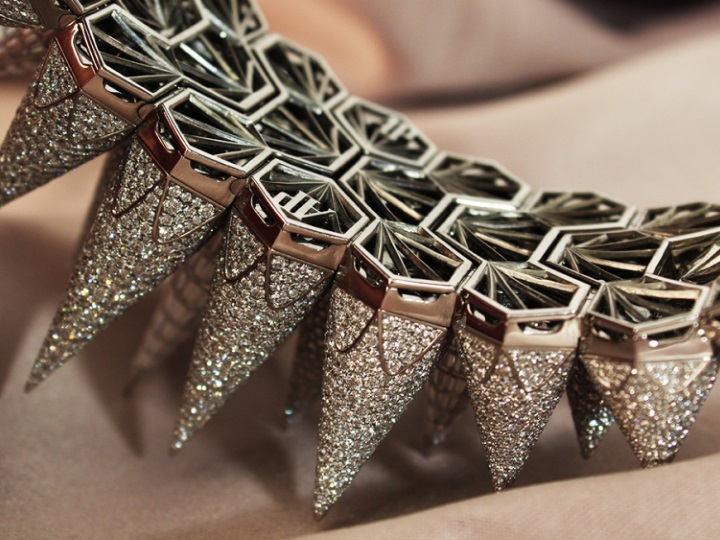 Though timekeeping is clearly not the priority, the Diamond Outrage is still a wristwatch at its core.

Earlier this year, Audemars Piguet unveiled the final instalment of a particularly eccentric haute joaillerie trilogy — the Audemars Piguet Diamond Outrage. Sharing the outlandish and edgy design DNA of its two siblings, the Diamond Punk and Diamond Fury, the Diamond Outrage truly turns the knob to eleven, using pronounced diamond-crusted spikes integrated into a hefty white gold bracelet to convey a look one could only describe as "matriarch of a post-apocalyptic civilisation." Kidding aside, the Diamond Outrage is a testament to Audemars Piguet's drive to showcase its technical abilities, much in the same manner as its all-ceramic Royal Oak Perpetual Calendar that also launched this year. After the glowing Serena Williams wore the Diamond Outrage to the Met Gala last month, it made a quick detour to our offices for a first-hand look at the unique creation.

Though timekeeping is clearly not the priority, the Diamond Outrage is still a wristwatch at its core. Powered by the Audemars Piguet Calibre 2701 quartz movement, the compact timekeeper is hidden beneath a small door on the inner side of the spike-laden piece.

Far from a daily wear piece, its use of a quartz movement is logical from a practical standpoint. When it comes to the epic stone setting of this spiky behemoth, there is a lot to take in. 9,923 brilliant-cut diamonds of a variety of sizes — 50.06 carats worth — make up the snow setting that take up the majority of its visible real estate. A trio of the bracelet's most pronounced spikes are clad in 354 baguette-cut diamonds—bringing the total weight of diamonds featured on the piece to roughly 66.45 carats. Beautiful and brilliant as it is, the white gold bracelet structure that lies beneath such a precious mass is an architectural marvel all its own.

The hollowed white gold structure provides ample access for light to pass through its stones, all while removing a touch of heft from the well-weighted masterpiece. At time of publication, both Diamond Outrage (price upon request) and its blue sapphire twin are still available for order at Audemars Piguet boutiques. (audemarspiguet.com)