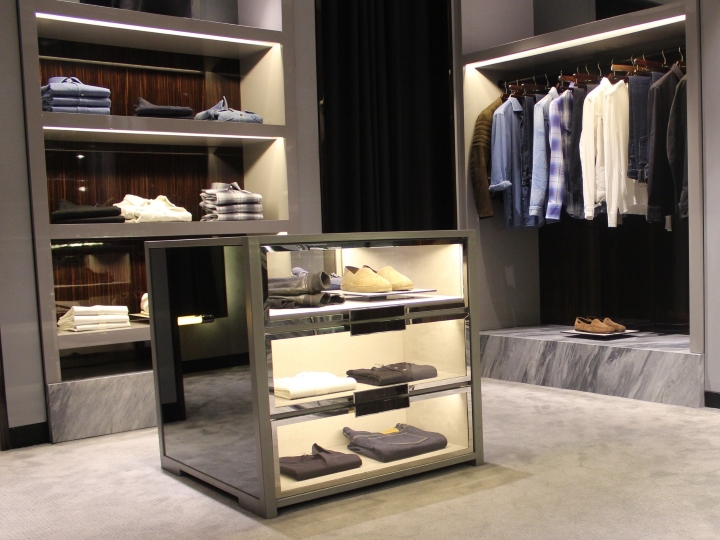 Harrolds digs in to grow its flagship store

Taking the next step has taken time, a lot of money and a serious amount of remodelling – including annexing a basement carpark.

For the past three decades, Harrolds has been among Australia’s most revered men’s fashion retailers, a local department store stocking the most glamorous global menswear names and taking on the single-branded boutiques springing up around it.

But taking the next step has taken time, a lot of money and a serious amount of remodelling – not to mention a diversification into high-end womenswear and accessories. After six months of upheaval, Harrolds this week relaunched its flagship store at 101 Collins, regarded as the most exclusive address at the ‘Paris’ end of Melbourne’s Collins Street. The bright and luxurious three-level boutique covers 1500 square metres and is a serious growth from the previous layout. Instead of going up or annexing an adjoining property, as is so often the case, the Poulakis family which owns the store went down – into the carpark, to be precise, to create a new lower level. The result is a glittering showcase of global luxury fashion, including concessions for powerhouse menswear retailers Tom Ford, Stefano Ricci and Dunhill, plus major displays from the likes of Saint Laurent, Thom Browne, Balenciaga, Givenchy, Victoria Beckham, and some of Australia’s edgiest designers including Song For The Mute and Strateas Carlucci.

Ross Poulakis, who presided over the relaunch and a brief in-store catwalk show along with his parents Mary and John and brother Alexander, said the company’s heart and soul remained in the Melbourne store, in spite of the company’s other stores in Sydney and the Gold Coast.
“In August we were just a men’s store in Melbourne and we have turned this store at 101 Collins Street into, not just Australia’s best retail store, but a global, world-leading retail store,” he told invited guests. Sharply attired Melbourne businessman Tony Demarco has shopped at Harrolds for over a decade and says it is the service, rather than the store itself or its brands, that keeps him coming back.

“I can go to some other boutiques on this street and they’ll look you up and down before deciding if it’s worth their time to serve you,” he said. “When I come to Harrolds I’m greeted at the door and by the time I get to the menswear area on the top floor, the manager is waiting for me with a coffee ready. “They have the brands I want – I’m a huge fan of Stefano Ricci in particular – but I can get the brands elsewhere. It’s the old-fashion customer service that impresses me. I pretty much do all my shopping here.”