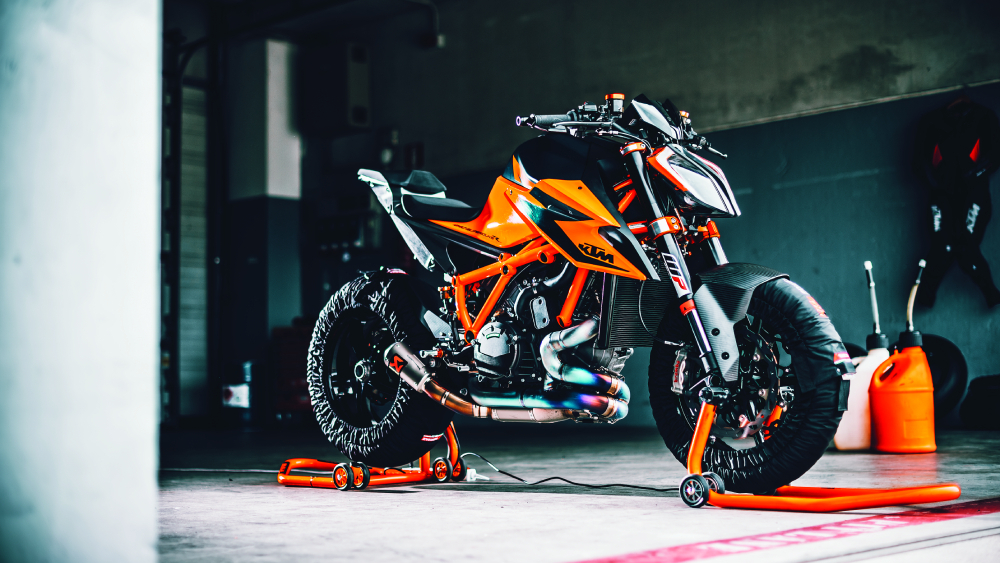 The Newest KTM Super Duke Is A Monstrous Street Bike

Beastly torque and a redesigned body make for an unforgettable ride.

Austrian motorcycle maker KTM calls its 1290 Super Duke R the Beast for good reason. The bike’s monstrous torque can pull a rider out of corners and fire them toward the horizon with ballistic force. The trigger is the 1,301cc V-twin, nestled in an all-new chassis for 2020, which pumps out 140Nm of torque and 132kW delivered at 8,000 rpm and 9,500 rpm, respectively. Placed roughly 1.5 inches higher in the frame than before, the repositioned four-stroke motor contributes to a higher centre of gravity for improved cornering agility, especially when transitioning from side to side.

Test-riding it at the Algarve International Circuit in southern Portugal, I find that the Super Duke requires laser-like focus, as the front wheel constantly paws the air over the racetrack’s many rises, the traction-control light flickering almost faster than you can blink.

Compared to previous iterations dating back to 2014, this version has more weight at the front, more feel and, therefore, greater turn speed—so much so that it’s hard to believe it’s not a racing motorcycle. Instead, the Super Duke is KTM’s interpretation of the ultimate street bike and, as such, morphs easily into a daily commuter when we switch to urban roads. And the refined electronics package, which includes stability control, lean-angle-sensitive traction control and cornering ABS, makes the ride as safe as can be expected when all systems are engaged.

The Beast is especially nimble when handling corners. Courtesy of Marco Campelli

This year’s model—the first revision since 2017—features a tubular-steel chassis that’s three times stiffer than its predecessors and a fully adjustable suspension. The result is a much sharper sporting motorcycle, one that follows the line you choose with greater precision and doesn’t get as flustered in the mid-corner as was previously the case. Hammer the throttle while cranked over and the bike stays taught, allowing you to use all the available grip from the rear Bridgestone S22 tire made specifically for this machine.

As a true naked bike, the Super Duke offers generous leg room, a wide stance and an upright riding position. The combination makes covering long distances a joy rather than the exercise in endurance offered by a superbike’s more aerodynamic racing configuration (think Aprilia RSV4 or any Ducati Panigale), which places considerable weight on your wrists. Although its looks have stayed decidedly menacing, the 2020 KTM 1290 Super Duke R is now more accessible for every level of rider—a beast that can behave.