The 139kW superbike has been revised only once before in its 22-year history.

Mention the Suzuki Hayabusa and even non-motorcycle people know it’s one very quick machine. After all, its name is the Japanese word for “peregrine falcon,” a bird that can reach speeds of more than 320km/h in descent. The model first appeared in 1999, instantly taking the title of “World’s Fastest Production Motorcycle” away from arch-rivals Honda and Kawasaki. In the 22 years since that spectacular debut, the Hayabusa has gone on to become a bike iconic of speed and excess. Surprisingly, it has been updated only once in all that time, the 2008 iteration. That is, until now.

The legend will be reborn in 2022, with Suzuki producing a Hayabusa that isn’t ground-up new, but more a heavy evolution. Under the skin sits a revised version of the 1,340 cc inline four-cylinder motor, producing 139kW (at 9,750 rpm) and a stump-pulling 149Nm of torque (at 7,000 rpm). Interestingly, that’s less than its most recent predecessor, which produced 144kW and 154Nm of torque. But the previous one didn’t have to contend with the myriad emissions hoops the 2022 ’Busa does, so for Suzuki to get that close and still pass Euro 5 regulations is commendable. And hey, a claimed 139kW is plenty impressive. 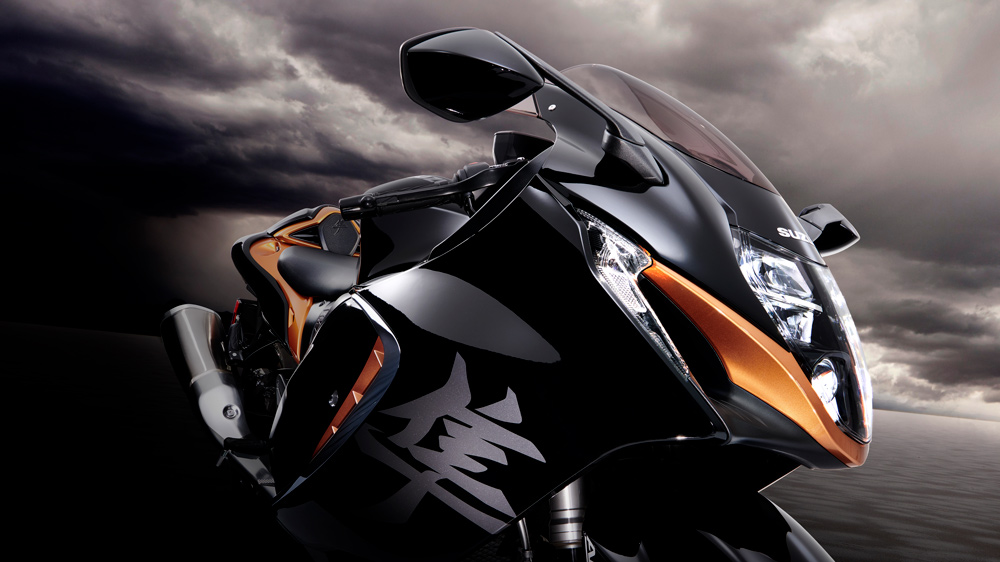 The 2022 Suzuki Hayabusa. Photo: Courtesy of the Suzuki Motor Corporation.

Certain numbers have increased, however, namely weight. The Hayabusa is now up a touch from a claimed 264kg to 267kg. And that’s despite the fact that Suzuki has gone through the motor from top to bottom, shaving weight off practically every nut, bolt, valve, spring, con-rod and the crankshaft where possible. Every major part of the motor is either revised or renewed, with Suzuki touting the motor as a far sturdier unit than in the past —quite a statement given the Hayabusa’s propensity to drag race with largely standard power plants. 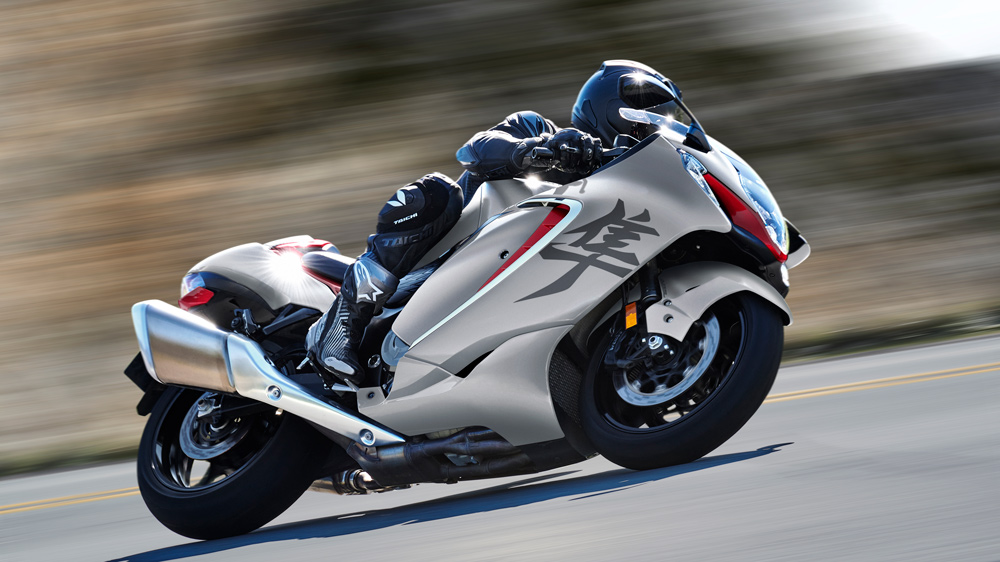 As for the chassis, there’s a more relaxed steering angle, which improves high-speed stability for the twin-spar aluminium frame. There’s also new Brembo Stylema brake calipers, in the same vein as the Ducati Panigale V4 S, and a new fully adjustable KYB suspension.

Where the latest ’Busa is vastly different from before is in the electronics. Simply put, the old machine was a dinosaur, and the 2022 edition has its feet firmly in the present. As such, Suzuki has finally graced the Hayabusa with an Inertial Measurement Unit, one that works in conjunction with the Suzuki Intelligent Ride System, a collection of electronic aids. 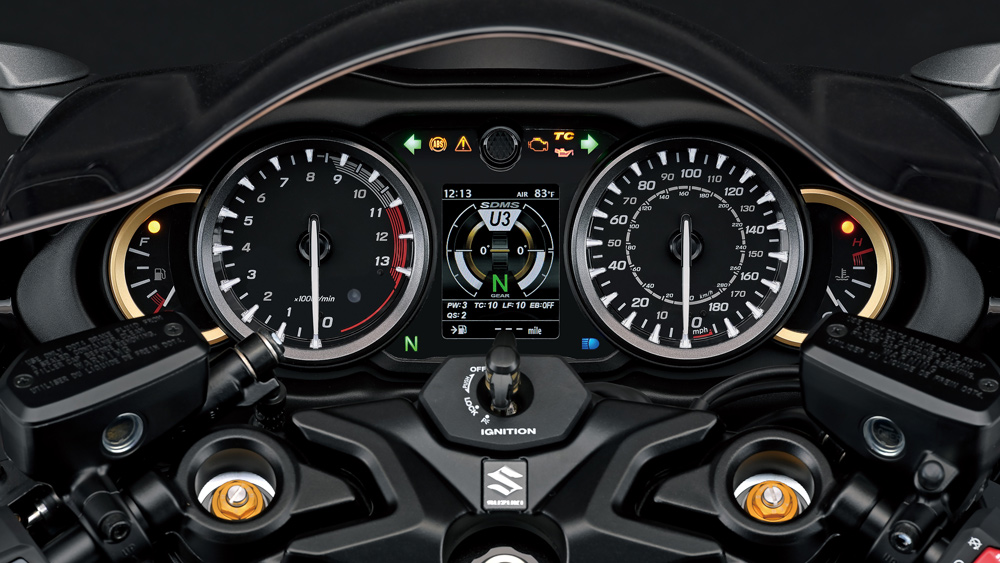 The dash includes two analog dials and a digital LCD TFT screen in the middle. Photo: Courtesy of the Suzuki Motor Corporation. 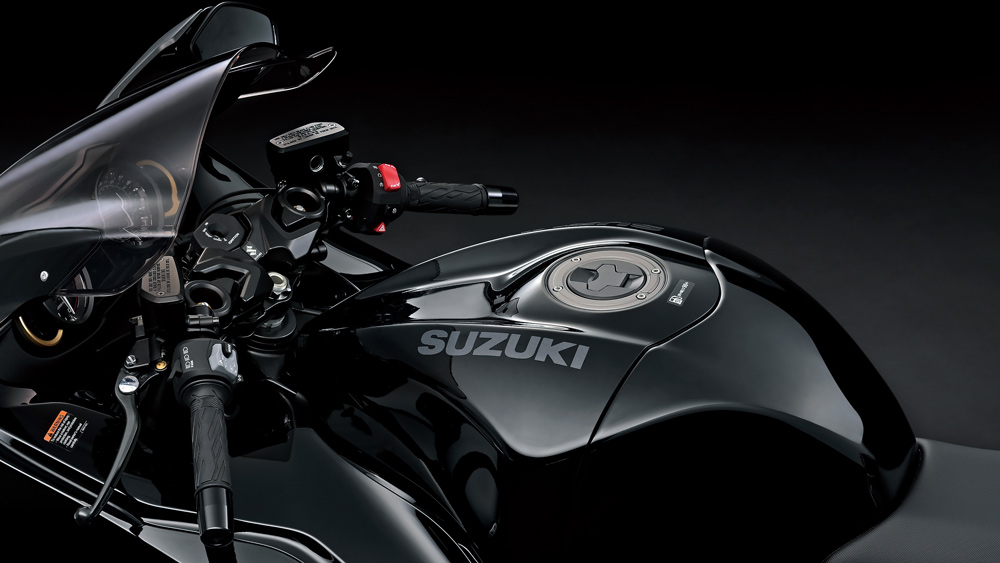 For the first time, the Hayabusa has an Inertial Measurement Unit, which works with the new suite of electronic assists. Photo: Courtesy of the Suzuki Motor Corporation.

Available in a choice of Glass Sparkle Black paired with Candy Burnt Gold, Metallic Matte Sword Silver accented with Candy Daring Red, and Pearl Brilliant White complemented by Metallic Matte Stellar Blue, the Hayabusa is wrapped in easily recognizable livery reminiscent of its lineage. And despite Suzuki giving an aerodynamic nip and tuck after hours in the wind tunnel, the finished product still looks very much like the original ’Busa of 1999.

The question is, will it be as good? It’s a bold move to bring back a model that was largely relegated to the history books, especially in an age where the title of “World’s Fastest” has been redefined given the sheer velocity of the current crop of superbikes. Regardless, we’re eager to give the third-generation Hayabusa the full-throttle treatment and report back once we’ve fried a few rear tyres.