The “Sea Eagle II” has landed.

A record-breaker for Royal Huisman as its largest launch, Sea Eagle II is also the world’s largest aluminium sailing yacht. The Dutch yard has built hundreds of vessels during its 136-year history, but this 81-metre vessel, with 60-metre-high carbon masts and a sweeping, 343-square-metre sail plan, is its most sophisticated—and magnificent—to date.

Royal Huisman built the first Sea Eagle for the same owner, a Taiwanese businessman and veteran sailor, who took delivery in 2015. Eclipsing the original Sea Eagle by 36-metres, Sea Eagle II is a Panamax schooner designed for transiting the Panama Canal, her masts clearing the tall Bridge of the Americas on the Pacific side by only a few feet.

“I visited the yacht regularly during a nearly four-year build, and each time I was struck by her huge scale,” says Mark Whiteley, who designed both the interior and, with Dykstra Naval Architects, the exterior. “With so much open deck space, she has a very clean, proportional look.” 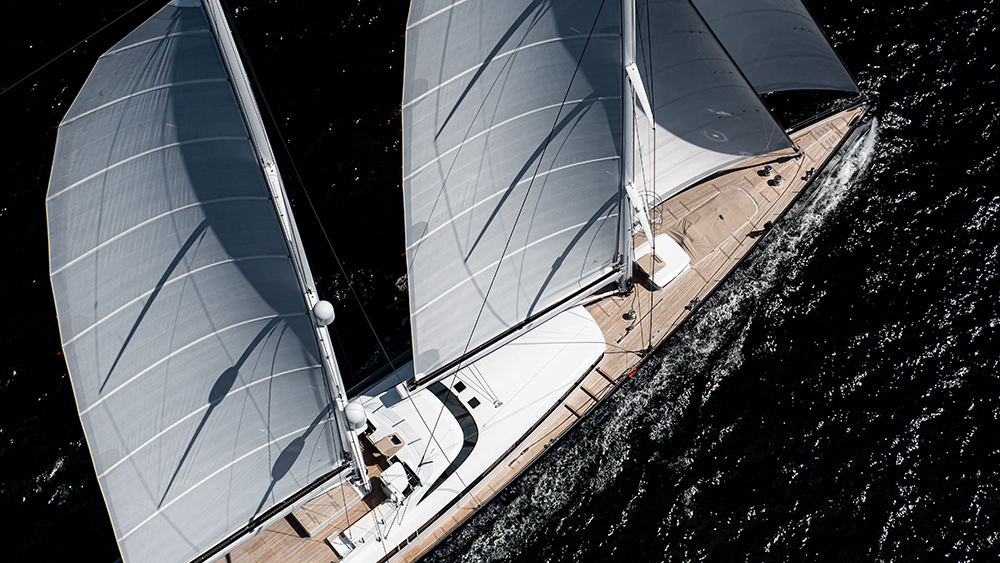 The interior has the same sense of considered airiness. Sustainable Alpi-walnut wall panels, wenge trim and natural oak floors provide a calming backdrop, while the owner’s collection of modern art adds splashes of colour. Since it’s a sailing yacht, the owner mandated handrails across the cabin, which Whiteley wrapped in leather as a design motif. The yacht will be used
to host business meetings, so the large salon has copious seating, plus a 16-place dining table for formal occasions.

The slender hull by Dykstra, mated to the carbon-fibre masts, makes Sea Eagle II instantly recognisable. Despite being a cruiser with accommodations for 11 guests and 14 crew, the yacht sails at an impressive 21.4 knots. The Integrated Sailing System by Royal Huisman’s sister company, Rondal, includes those carbon masts with furling booms, automatic deck winches, mainsail furling systems and rigging with load sensing. Even the first-of-its-kind carbon rudder, with load sensors, is high-tech—the type of painstaking attention to detail, as in the rest of the design, that helps the huge yacht soar.