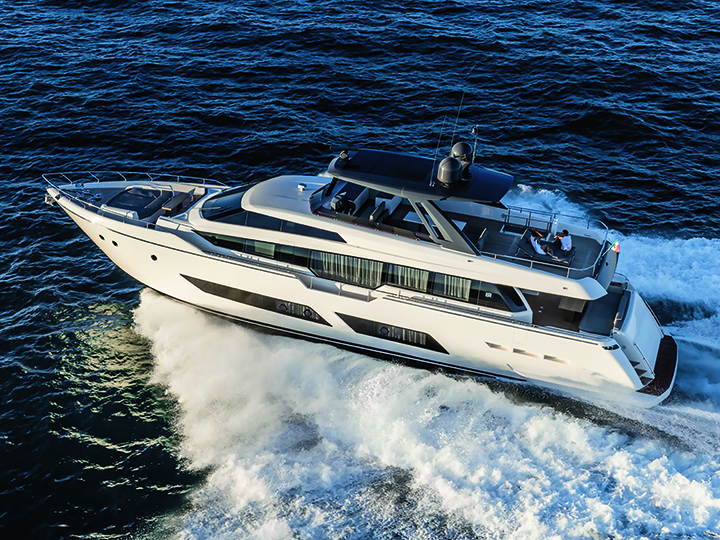 This $8 million Ferretti 850 is under construction and expected to be delivered to a new Sydney owner later this year.

Ray White Marine is celebrating the Ferretti Yachts brand’s first new build into Australia in four years. The $8 million Ferretti 850 – described by RWM sales director Brock Rodwell as “26 metres of sheer Italian opulence” – is now under construction, with delivery to Sydney expected in the fourth quarter of this year. The owner, an Australian developer with a penchant for speed, was eager to inspect this aquatic beauty first-hand. He took delivery of a new V12 Ferrari in Maranello and drove direct to Ferretti’s shipyard in Cattolica, on the Adriatic coast. Rumours persist that he managed to complete the journey in somewhat less than the usual two hours …

Ferretti’s bespoke approach had allowed the owner to effectively design his as-yet-unnamed boat from the hull upwards. Virtually everything on board this technologically laden craft is controllable by C Zone or Bluetooth. The big, six-metre-beam boat has al fresco dining spaces on the bow and the stern, and a large saloon joined to the cockpit via sensor sliding doors. Below decks are four spacious ensuite staterooms, with ceilings of a generous height. The bespoke features include an interior package by Minotti Design, and brushed stainless steel and aluminium panelling, rather than traditional timber. The boat will be unveiled at the 2017 Cannes Yachting Festival in September, after which the owner intends to cruise the Italian Riviera before the boat is shipped to Sydney.