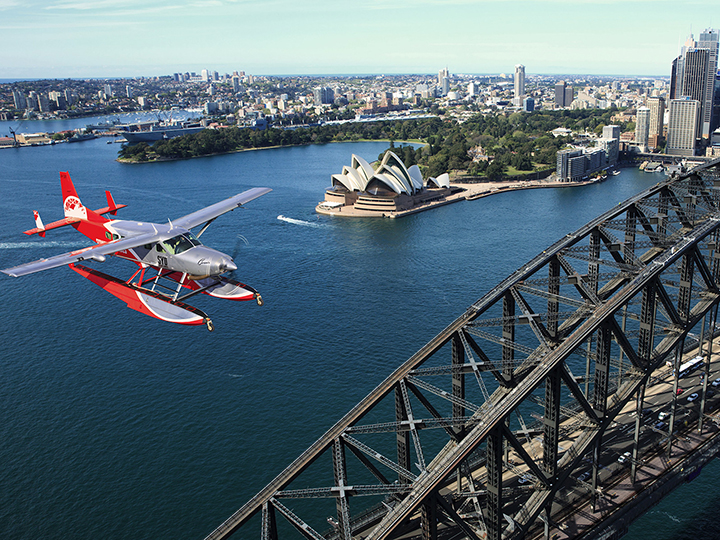 See Sydney in a way you’ve never seen it before

The one sure way to make Sydney look even more spectacular is to see it from above.

Sydneysiders and frequent visitors to the Harbour City probably think they’ve experienced the best it has to offer. They’ve climbed the Harbour Bridge, swum at the spectacular beaches and most certainly taken a ferry.

Been there, done that and got the t-shirt to prove it, right? But there’s still a way to see one of the world’s most spectacular cities in a whole new light – by seaplane.

From the moment you arrive at the modern Sydney Seaplanes terminal in sparkling Rose Bay and see the aircraft bobbing in the water, you know you’re in for a unique experience. Rose Bay was chosen as an ideal water airport for ‘flying boats’ in the 1930s. In this period, if you wanted to fly to Europe, this was the way to travel. For more than the average cost of an annual wage, these flying boats were large enough for people to stroll around and socialise on the promenade deck or in the silver service restaurant. Probably a good idea there was so much space, considering a flight to London took 10 days, with over 30 stops!

These days, there isn’t quite as much room on seaplanes. In fact, it’s decidedly compact as we squeeze down the narrow aisle of the Cessna C208 Caravan Amphibian – but the advantage is that there are vistas from each seat in the aircraft. The takeoff down our watery ‘runway’ is bumpy, but once you clear the harbour, you feel as light as a feather as you skim over the crystal clear water. We took a ‘Sydney Secrets’ tour, which takes you out of the Heads and up the Northern Beaches, right to Barrenjoey Headland. As you fly over Pittwater, you’ll be amazed by the sheer number of boats moored in the little inlets and attached to jetties near waterfront mansions. It seems like everyone in this part of the world owns their own watercraft. The flight path takes you over the Ku-ring-gai National Park where you can see just how vast this part of Sydney is. To the north are tree covered peaks and valleys as far as the eye can see, with small villages dotted throughout. The plane tracks back south, over Sydney’s northern suburbia before popping out over the ocean at Long Reef and heading back down to the city. The beaches are long and golden, even more beautiful from the air. There’s time for one last swoop over the Harbour Bridge and Opera House before you make your descent back into Rose Bay. After such a spectacular journey, it’s an opportune time to sit and savour the experience. The Empire Lounge at the terminal is ideal to enjoy a coffee or a glass of bubbles as you as you watch the next group of aviators take off.

Sydney Seaplanes can also combine your flight with one of their dining packages. You can land on the Hawkesbury and dine at restaurants such as Jonah’s, Berowra Waters Inn or Cottage Point Inn.

Either way, you’ll never look at Sydney in the same way again.